We Had It Your Way - Former Burger King - Cocoa, FL

Heading down the road on the way towards Merritt Island, I passed an odd sight. Right next to eachother laid a pair of fast food joints, both abandoned and vacant. Nothing for neighbors except a suspicious motel, I was unable to stop at first passing but promptly returned on the way back, camera in hand. Here we'll feature the first of the establishments, a wonderfully vintage former Burger King. Here we can see the rusty, empty sign frame which advertises nothing except the fact that this property is indeed, available. 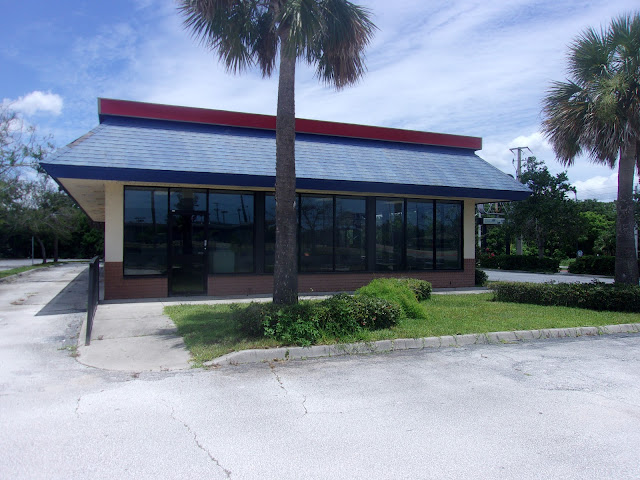 Swiveling around to the front of the store, we can see this storefront in it's fully blue, tan, and red color scheme. Remember when fast food joints had colors other than shades of brown and grey? Those were good days. We can also see the pair of palm trees that I believe are mandated by state law to be in front of every establishment. Thanks to Florida's climate, most decorative plants tend to thrive even in the abscence of caretakers, which is always nice to see. 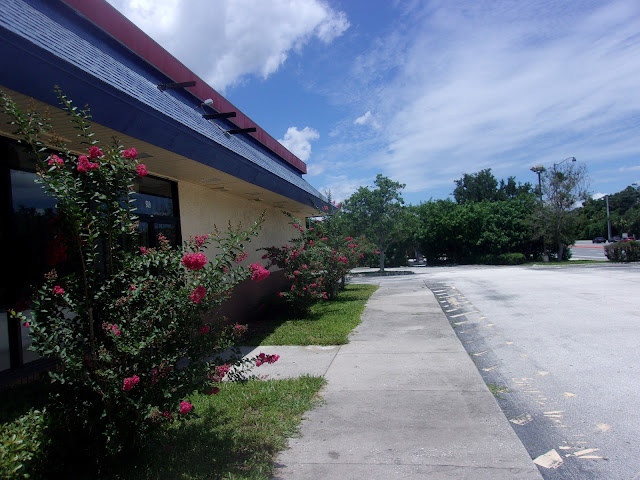 Further example of the thriving plants, we have some quite pretty flower bushes that have grown in various hilter-skilter directions in the abscence of the all mighty hedge trimmer. Were the black bars near the top of the roof possibly sign supports? I'm not sure where the signs went on these buildings. Around back, it's just lots of general grimey-ness and utilities. I finding it amusing they painted all the large electrical box and all the conduit to match the wall, but it slightly dissapoints me they didn't do the same to the door. 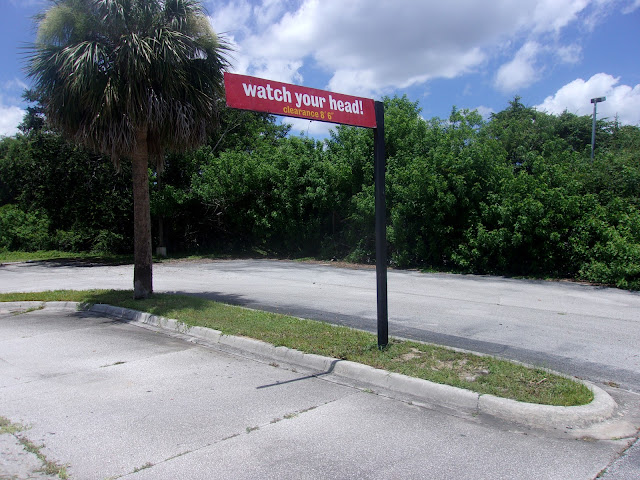 Turning around to stare at the asphalt and the encroaching overgrowth, we enter the drive through. Not much to comment here, aside from the fact the "Watch your head!" sign has held up rather well, as has the rest of this building. Also note another omnipresent palm tree.

Some of the only damage to this building seems to have been the loss of a corresponding speaker on one side of the drive through kiosk. Im surprised that lone, dented orange cone has disappeared, if not by theft but from the wind.

Looking down the drive through we get some faded and cracked asphalt (But still somehow better than 90% of suburban Palm Bay. I wish that was a joke.) and a rare normal tree amongst the palm tree invasion. I'm not sure what would have gone in that frame, advertising posters? We also get a nice shot of my now departed silver van.

Walking down the drive through (always a surreal experience) and around the side, we again reach the front of the building and turn towards the doors to begin our look inside.
Here we see a trademark of older Burger Kings,the spatula door handles.This pair is quite weathered, but the logos at least still show clear. You can also see some tile, a trash can, and some line-defining bars, which are a hint towards what's to come in the rest of the interior.

I can never resist photographing these little stickers. Anyways, this is our final photo of the exterior, and we shall now move to the quite amazing interior.

Yeah. This honestly took me quite aback, when I found it. The Wendy's next door, which will feature in a future post, was stripped down to the literal concrete, so this amazing time capsule of an interior was a real gem. It's really quite astonishing, it all looks as if they were just told to close in the middle of getting ready one morning. The chairs are set, the napkin dispensers are full of napkins, and there's even a spray bottle on the counter as if an employee vanished in the middle of cleaning. The muted purple and green, combined with acres of off-white and that amazingly tacky wallpaper make this a really interesting interior just to take in. Even if any Burger Kings survive with this interior, I doubt they're in this good of condition.

Anyways. this blast to the past over with, I'm signing off for now. Sorry about the gap in posts, I got sick for a few days which threw off my attempts at a schedule. As such the next post will go out ahead of time sometime Saturday or Sunday. This was Cape Kennedy Retail, until next time.