Barnhill's opened here in 1983, and closed in 2007 as a part of their bankruptcy restructuring. The restaurant sat vacant until March 2015 when the building was torn down to make way for the neighboring Keiser University's expansion project.

During my first visit to the former Albertsons next door, I was intrigued by the interesting look of this building and the barn theme it seemed to have. Of course, I had to walk over and take a peek around! Then when I found out it was a former Barnhill's Buffet, the design then began to make sense to me! For those of you who don't know, Barnhill's was a chain of buffet style restaurants with locations throughout the Southeast, and focused on serving Southern style specialties. After their 2007 bankruptcy, only 16 Barnhill's locations survived, and those have slowly closed over the years to the point where one one Barnhill's restaurant remains in Jonesboro, AR. This location also used to look even more barn like until recently. In this 2011 Google Street View, you can see some pieces of the facade that have since been removed (although now, the entire building itself has been removed). As Retail Retell commented, "Man, I used to love Barnhill's!! Sad that most of them are gone now..." In case anyone was curious or interested, here's a list of Barnhill's locations from 2006, just before the company declared bankruptcy.

The back part of the Barnhill's Buffet building. 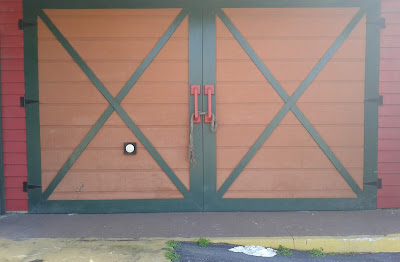 Close-up of one of the barn doors on the old Barnhill's building. These doors weren't just for show or decoration, as they were actually used. I believe the dumpsters were kept behind this door. 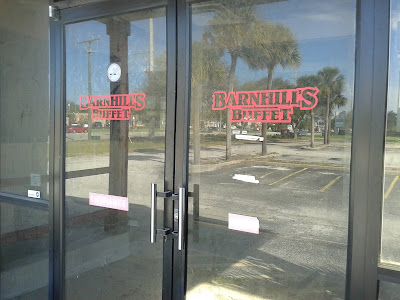 The Barnhill's logo was still left on the front door after they closed. Sorry about the glare here. 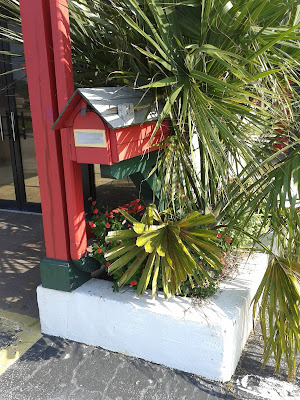 They even carried the whole barn theme over to the mailbox! As Retail Retell commented, "Looks like it may have even had the logo on the front of the mailbox... if it did, not sure scraping it off did much help!" Thinking back to it now, this mailbox probably would have been a neat piece to salvage from this place. It's certainly much more interesting than the boring black one in front of my house right now! 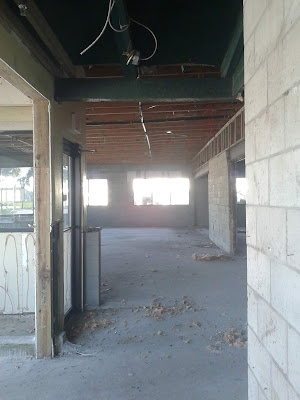 Taking a look inside the old Barnhill's building and we find...nothing. The place was gutted out at some point, probably when they removed those peaked roofs I mentioned before. This picture was taken through an emergency exit door located around the corner from the main entrance. I believe this would have been looking into one of the dining rooms on the left side of the building, facing Babcock Street. 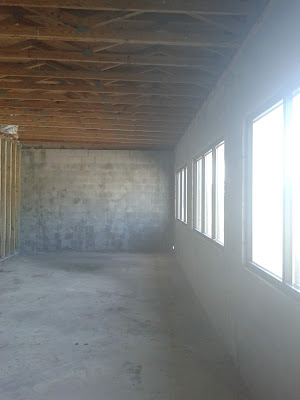 Another interior picture taken through a different emergency exit door, this time looking toward the right end of the building. This was also another dining room. 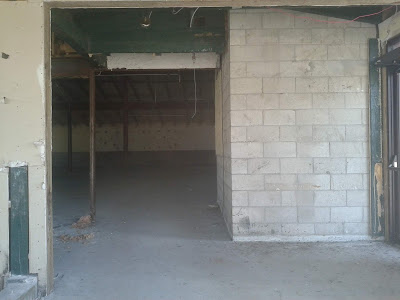 Looking through the main entrance door toward where the buffets would have been. 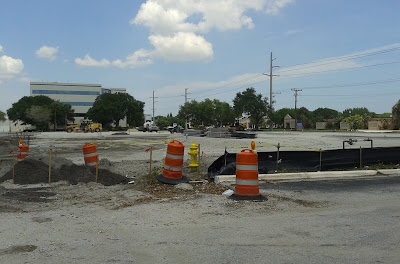 So that's all I have for now. Until the next post.