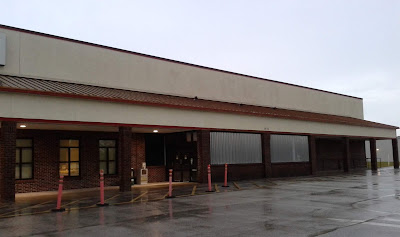 Food Lion first built this store in 1994, next door to a building that once housed a Pantry Pride grocery store (which is now a community center). As was the case with most of Food Lion's Florida locations, this store converted into a Kash n' Karry in 1999 as part of Food Lion's attempt to salvage their Florida presence. It didn't work, and this Kash n' Karry closed in 2004 when Delhaize pulled the brand out of Eastern and Central Florida. The left third of this building has been home to the Satellite Beach post office for a while now (since the late 2000's I believe), and the remaining portion of the building has been abandoned and untouched since 2004.

Get your lion's share of abandonment with today's My Florida Retail post! As we will soon see, the Satellite Beach Food Lion is quite interesting in the fact that it's been partially abandoned for 15 years now. At the end of this post we'll get to see the cool relics left inside this place, but for now we'll start off with an exterior tour of the building... 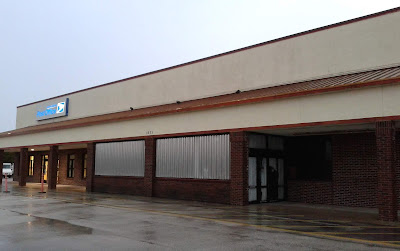 Extra Low Prices ('Cause There's Nothing Here!) For the most part, this was a typical 80's/90's model Food Lion, although the brickwork is a bit unusual for one of their Florida locations. The exterior is completely original to this building's Food Lion days. 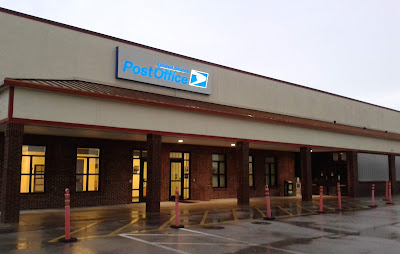 Life's Better with the Post Office. Here's a closeup of the post office side of the building. I visited this store on a cloudy, rainy evening after the post office had closed, and the weather just gave this building a really creepy feel. 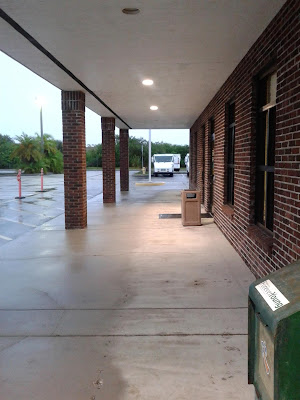 Easy, Fresh, and Postal. Looking across the left walkway, from in front of the entrance into the old Food Lion. All of the windows on this side of the building were carved out by the post office. As would be expected, the post office didn't leave anything obvious behind in their side of the building. As Retail Retell asked, "Did this post office relocate from elsewhere, or was it brand new?" I'm pretty sure this post office relocated from somewhere else in town, but I don't know where. As Retail Retell responded, "Okay, cool. I thought it would be a bit weird for a completely new post office to open up!" Yeah, completely new post offices don't seem to be something very common! 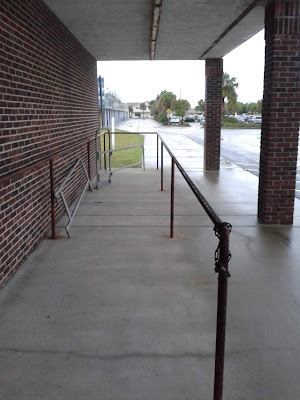 LFPINC - Lonely, Forgotten, Purposeless, Idle, and No Carts! Jumping over to the abandoned right side of the building, things get a bit more interesting. Here the old rails from the cart return remain, as well as a bent-up cart corral that used to be out in the parking lot. If you look off in the distance down the sidewalk, you can see part of the old Pantry Pride building. I didn't get a picture of that building, but it really doesn't look like much like a supermarket anymore. 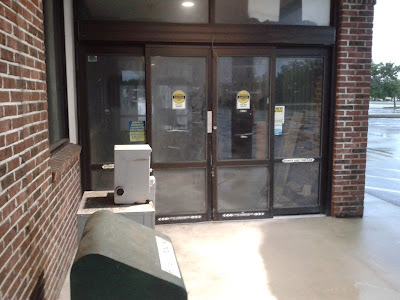 The left side entryway into the old Food Lion. The dark, gloomy skies and rain this day made for some pretty creepy photos from this place. 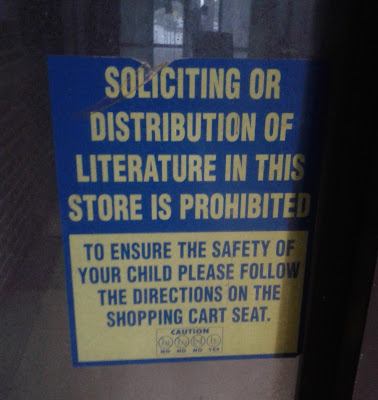 An old Food Lion decal still stuck to the door! 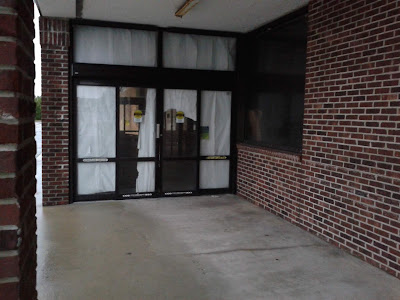 Hopping around to the other side of the building for a look at the right side entrance into the old Food Lion. Both entrances are completely identical, and feed into the same vestibule. 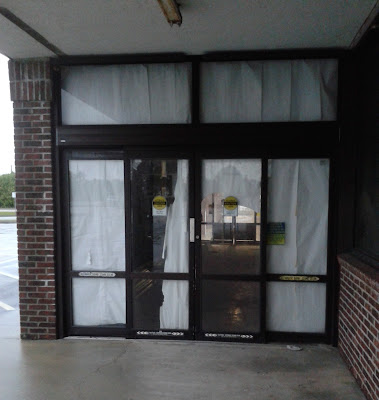 A more straight-on view of the doors on the right side of the building. As you can see, the curtains (or whatever that is) covering the glass haven’t held up well, so let’s take a peek inside and see what’s going on inside this old Food Lion… 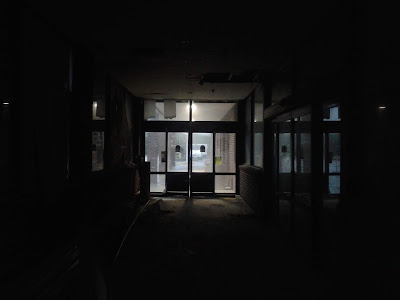 Don’t Go Toward the Light AFB!!! Speaking of that, this rather eerie photo reminds me of an old story…

One dark and stormy evening many years ago, a young retail fan ventured up to the sullen doors of the old Satellite Beach Food Lion. Not knowing any better, he pressed the lens of his camera against the dusty glass of the front door for a photo, hoping for a glimpse inside. A soft breeze began to blow across the empty walkway as he did this, ruffling the palm fronds on the trees out front, disturbing much of the evening’s silence. As he went to take his prize photo, suddenly the front doors of the old Food Lion squeaked open. The young retail fan was intrigued by this unbeknownst opportunity put before him. Not sure what to do, curiosity eventually got the best of him, and he stepped into the shadowy interior that lay before him. Shortly after this a scream was heard throughout the beachside, penetrating throughout the usually calm community. So the legend goes, when the police arrived at the old Food Lion to investigate the scream, all they found of the young retail fan was a smashed camera inside the vestibule, and a message written in the dust on the floor that read “Heed the Lion!” To this day, nobody knows whatever happened to the young retail fan that evening in Satellite Beach, but the legend of the Lion still lives on, bringing chills to all who dare photograph his abandoned beachside home.

Here we can see this rather creepy photo of mine featuring the interior of the Food Lion’s old vestibule. While I was a bit upset at how my interior photos of this store turned out this day due to the lack of light, I really liked how this one came out. The dimly lit hall with the bright light at the end really looks like the perfect setting for a creepy story (like that one above that I may or may not have made up)! You guys on flickr liked my little tale, saying "Spooky photo and story! I might think twice before pressing my camera up against any abandoned glass door now. o.o" (Sunshine Retail) and "Gives me chills every time" (Retail Retell) and "That's the most creepy Food Lion entrance vestibule I ever seen! Hahaha, love the story! The crazy thing is not long after I took photos of the (then abandoned Panama City Albertsons), I had sort of a nightmare where curiosity got the best of me, and I popped open one of the old back doors of #4355 and walked into a very dark, creepy, musty, and cavernous building. I then heard voices coming from the corner of the building (in the dark). I assumed they were either thugs or vagabonds hiding out. I remember getting creeped-out and headed to the back door to get out of there! That 's all I remember when I woke up, but it was a spooky dream!" (YonWooRetail2). 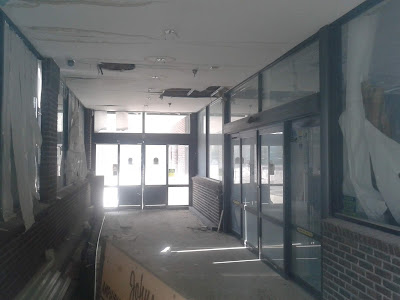 Turning the lights on, this place really isn't too scary after all! Like I said above, the gloomy nature of that day caused my interior photos to come out very dark with not much visible. A few days later I drove back up here on a much sunnier day in order to get a better peek inside this place, with much better (and less creepy) results. I'm glad I came back too, as there's some pretty cool stuff lurking inside the abandoned portion of this building. With the light shining in, we can see that 15 years of abandonment hasn't been kind to this building (especially with the ceiling). 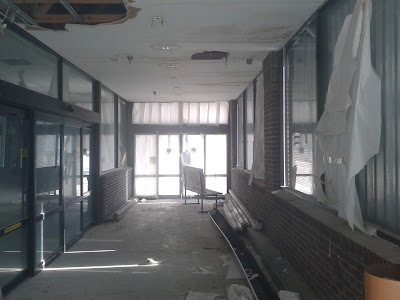 Another view into the vestibule, looking in from the left side doors this time. 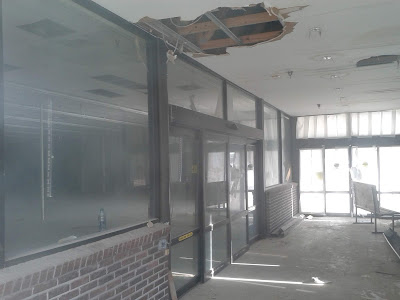 Originally, most of these older Food Lions would have been built with this inner door. However, I've noticed many times that this inner door and windows were removed in order to create an open vestibule. As styertowne commented, "These Food Lion stores always remind me of A&P’s 1970’s/early 80’s mansard-rooved model which also were built with a dual-entrance foyer (which A&P also often later turned into an open vestibule) - like this." 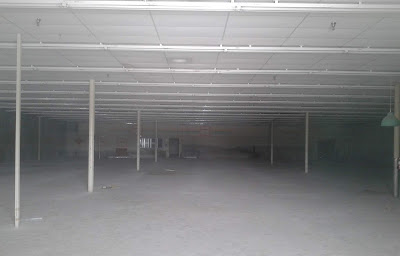 Now for the most exciting part of this former Food Lion as we turn our attention over to the main store - remnants from Food Lion's early 90's interior! While this store did convert into a Kash n' Karry, it appears this location never got remodeled to the Kash n' Karry decor before it closed in 2004. From 1999 to 2004, this place was essentially still a Food Lion in everything but name. I have some better photos of the abandoned interior of this store below, but for a peek at what this decor would have looked like in full form back in the day, click here for a sample. As NC Piedmont Retail Database said, "Oh yes! The old early 1990s "futuristic Handel Gothic" signage, that is what I have expected from an old Food Lion that was abandoned! Around the time of the Primetime Live investigation on ABC in 1992, it could be the year that it was introduced. I know for a fact that the Shelbyville, TN Food Lion store that you looked up, still has the futuristic decor, and has been left untouched." YonWooRetail2 and Retail Retell were also intrigued by this decor, saying (respectively): "That's neat! From a distance, it sort of resembles a rainbow stripe on the wall." and "What a retro décor package - sweet!" 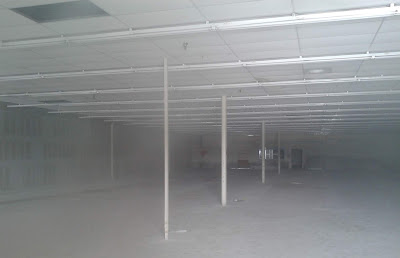 Now we'll spend a little more time taking a closer look at the really cool 90’s décor relics inside this abandoned Food Lion. Here we’re looking into the left half of the abandoned portion of the building. The wall on the left is the partition between this space and the post office. The post office’s space ends at Food Lion’s old back wall, with the original stockroom space continuing behind the post office. 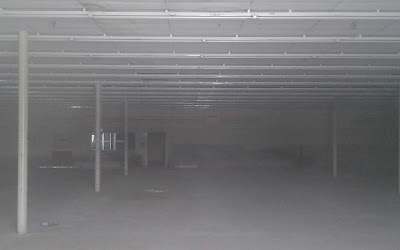 My poor attempt at trying to zoom in on some of the décor remnants in the back of the store. The haze you see is a combination of the dirt on the window and the not-so-great quality of my old phone’s zoom feature. 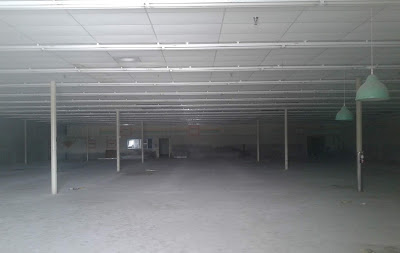 This was probably my best interior shot of the abandoned half of the store, with our best look at those 90’s décor remnants. The far back wall would have been home to meats, with frozen foods along the right side wall. Those hanging green lights on the right side of this photo were over the old produce department. 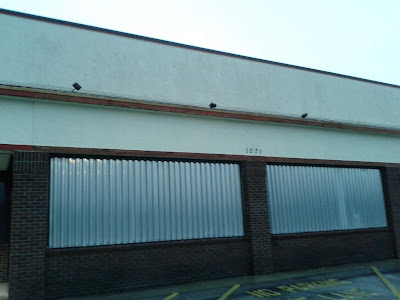 And that’s a wrap for the Satellite Beach Food Lion! I hope everyone liked this interesting and eerie look at this abandoned store.

P.S. - Remember, don't go toward the light!
Posted by Albertsons Florida Blog at 11:50 AM