This Ryan's Restaurant opened around 1990. In 2004, the franchisee of the 19 Florida Ryan's restaurants dropped their affiliation with the chain and converted these restaurants into an independent chain called Whistle Junction, a train station themed buffet restaurant. Around 2007, the owners of Whistle Junction fell on financial hardships and closed most of their restaurants around that time. After Whistle Junction closed this location, this building became home to a location of an Allied Veterans Video Arcade (essentially a casino in disguise thanks to a legal loophole). The Allied Veterans chain of gambling parlors got caught up in a fraud scandal that led to the resignation of Florida's lieutenant governor in 2013. That scandal led to tougher gambling restrictions in Florida that made for the closure of all of these popular casino arcade establishments in 2014, sending this place and many others out of business. The building sat vacant until early 2016, when a developer bought this property and tore down the old Ryan's in order to build a student housing community for students at the Florida Institute of Technology located across the street. However, in 2019, a restaurant will be returning to this site, as a Dunkin' Donuts will be opening here as a part of the student housing redevelopment.

For today's post, we'll be taking a look at a restaurant turned gambling parlor turned student housing village (that's not a sequence of businesses you hear of often!). Nearly three years since this restaurant was torn down to make way for the new student housing development, this site is unrecognizable now as you drive by here on busy Babcock Street. The new Melbourne Commons is a student housing community comprised of six 3-story apartment buildings and a Dunkin' Donuts crammed onto a 2.87 acre lot, including a pool, a common building too, and full parking for 120 tenants too! (I still have no idea how they managed to cram all of that on this lot!) As Retail Retell commented, "I agree, that's a whole bunch for one former Ryan's lot!" If you're curious about the new tenant of this site, you can look at the plans here. But for now, let's get back to what I want to talk about - the former occupant of this site, the old Ryan's...

The design of this building is a pretty common design for most Ryan's restaurants I've seen throughout the country. Considering the recent financial troubles of Ryan's current owner Ovation Brands and their recent 3rd bankruptcy, there probably aren't too many Ryan's around anymore.

The right side of the Ryan's building, where the equipment rooms and delivery doors were located. 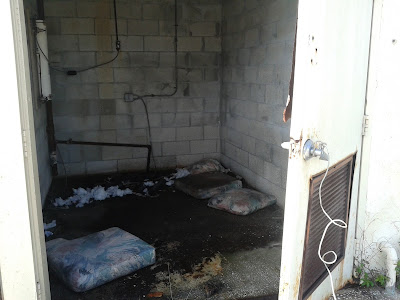 Looking inside one of the old utility rooms here. The door was left open, and it looked like someone was using this as their bedroom at one time. While it looks like someone removed (or stole) most of the equipment in here, I'm surprised those few copper pipes in the back haven't been stolen as well. 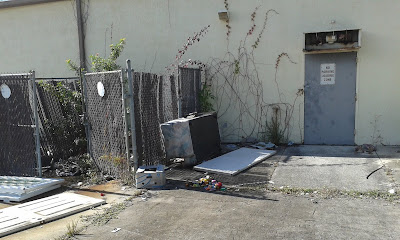 More from the back of the restaurant, which had become a dumping ground in the time after the Allied Veterans Video Arcade had closed. 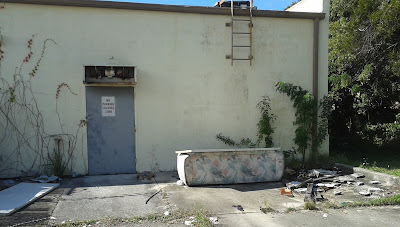 A view of the back right corner of the building, home to the receiving door, roof access, and...a couch. As Retail Retell commented, "Hey, they have to make the place feel homely!" If you scroll back up to the previous photo, there was even a matching loveseat to go with it! I guess that makes it even homier!

A view of the front of the building from closer up. The sign frame you see is original to Ryan's. 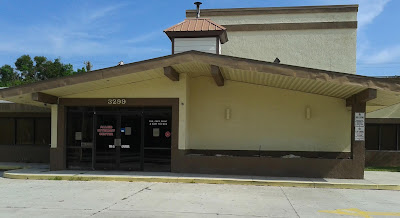 Looking straight toward the front entrance into the old Ryan's. 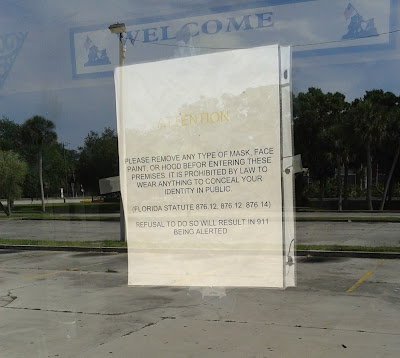 Warning sign posted on the front door by the Allied Veterans. 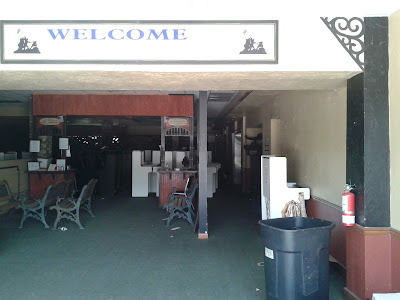 A peek inside the building through the front doors. Allied Veterans left behind all of their stuff except for the slot machines, which used to sit on those white podium-like pieces. 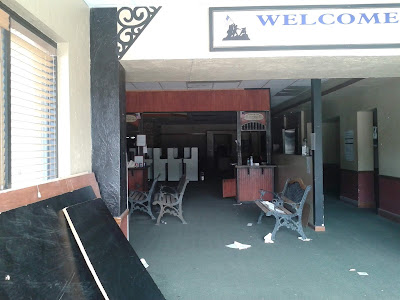 Another view through the front door, taken from a different angle. 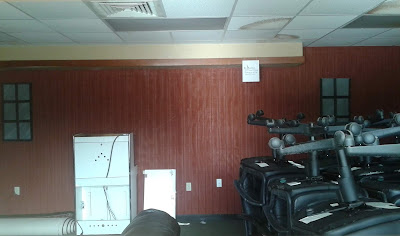 This was a picture taken through a window to the right of the entrance. All of these through the window pictures were taken through blinds that were left open. I assume this was a dining room back in the Ryan's/Whistle Junction days. 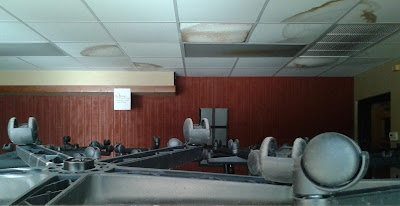 A view of this dining room taken from above the pile of chairs. Looks like there were some leaks in the roof too. However, that's won't be a problem here anymore. 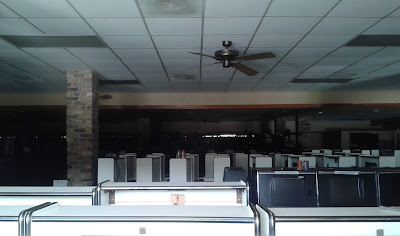 Moving along to some windows to the left of the main entrance for this photo. In this large open area would have been home to the buffets and more dining space when Ryan's was here. At this point, this was just a large room full of unused chairs and slot machines (which apparently were still here, unlike what I said above - I really need to look over my pictures closer!) 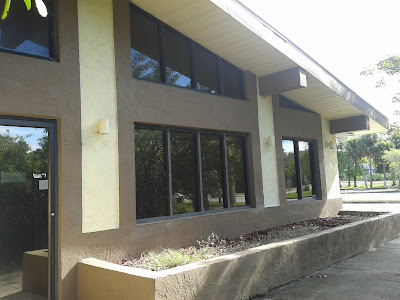 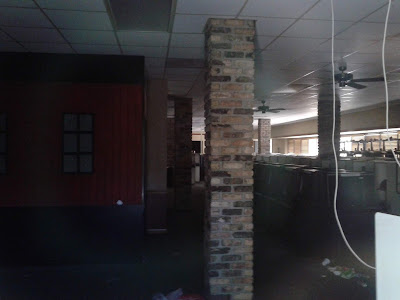 Looking inside the building through one of the many windows on the left side of the building. 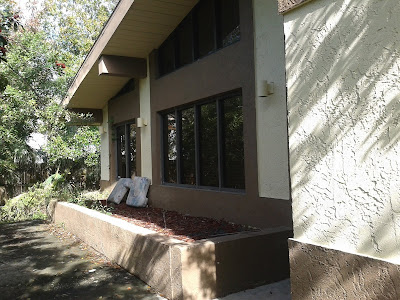 More of the exterior of the left side of the building. It looks like someone took some of the couch cushions from the back of the building and brought them up here, probably to make a cozy bed out of that old planter...

So that ends the few photos I have from the now long-flattened Melbourne Ryan's Buffet. So until the next post,