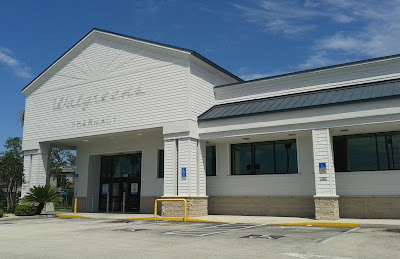 This Walgreens opened in 1999 on the site of an old gas station and a few other old buildings. The approval process to get this store built was a bit controversial, as this building was to be constructed in an area that is considered a historic district. In order to get this store approved, Walgreens had to slightly modify the look of this building to better match the “Old Florida” style of the surrounding neighborhood. However, this store was silently closed on August 24, 2016, apparently due to underperformance, and is still sitting vacant as of January 2019.

On a rather nice day back in September 2016, I was on my way to the beach. As I was about to turn onto the Eau Gallie Causeway from US 1, I noticed something peculiar out of the corner of my eye – the Walgreens at this corner had closed! The labelscars are what had caught me off guard, as I had never thought anything about Walgreens closing this location. The intersection of US 1 and the Eau Gallie Causeway is a very busy intersection, and this Walgreens was an extremely convenient stop for people heading toward the beach. Intrigued by this new discovery, I pulled into the parking lot of this former Walgreens for a closer look at what was going on here… 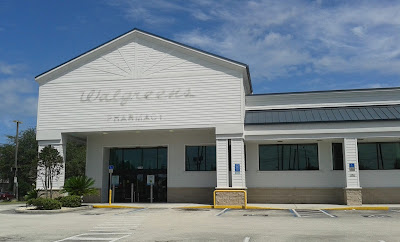 When I took this initial batch of photos, the store had only been closed for about two weeks. Much like I was surprised to see this store closed, many others were too. Quite a few other people pulled into the parking lot confused as to what was going on at this place, just to see the “permanently closed” sign taped to the front doors. I’m sure those people were even more confused as to why there was a guy walking around the parking lot taking pictures of the building also, but that’s probably beside the point. While the layout and style of this building is typical Walgreens, the design of the building’s facade had to be altered to match the historic style of the surrounding neighborhood. As such, the typical stucco walls were replaced with faux clapboard siding, and a metal roof awning was installed to mimic elements of the “Old Florida” style homes elsewhere in the neighborhood. 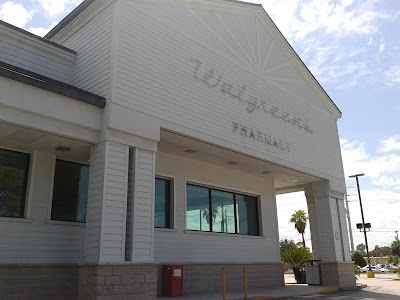 Here is a quick look at the left side of the building and the labelscar over here, which faces Eau Gallie Boulevard. This side is almost identical to the front, which faces US 1. As YonWooRetail2 commented, "What a shame! Walgreens doesn't appear to be in as good of shape as CVS. Actually a Walgreens in Panama City by Bay Medical Center closed around the same time as this one. I'll have to check that place out next time I'm up there. Because of the local code, this was certainly a very nice Walgreens!" Walgreens has been randomly closing a bunch of stores over the last few years (I think they said in 2015 they would be closing 200 stores to cut costs). Since Walgreens never publicly announces these closures, they can be hard to track down until you randomly come across an abandoned Walgreens in your travels. Including this store closing in 2016, Walgreens closed a store in Kissimmee in 2015, and one store each in Fort Pierce and Port St. Lucie in 2017 (which I believe rounds out the recent Walgreens closures in my area). There were also a few down in South Florida that were closed from what I saw in other people's photos, and a few others randomly across Florida. I'm surprised that Walgreens by Bay Medical Center closed. You'd think being near a hospital they'd get some decent foot traffic to the pharmacy counter. Anyway, it looks like Dollar Tree opened a store in that old Walgreens building late last year. Dollar Tree (or Dollar anything) would probably be a good fit for this old Walgreens too, and this would be one classy looking dollar store should that happen, as the design of this place is very nice! 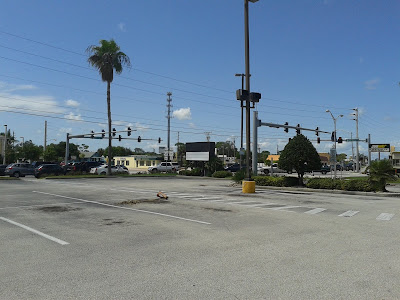 Here’s looking from the front of the abandoned Walgreens into its now empty parking lot. The painted over sign can be seen in the distance, as well as the busy intersection of US 1 and Eau Gallie Boulevard. 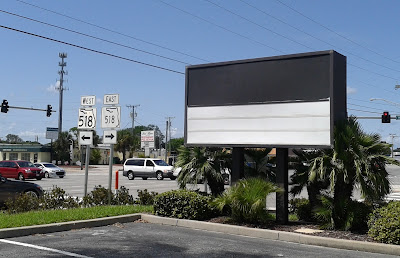 Here is a close-up of the blacked-out Walgreens road sign, which faces traffic on US 1. No more specials to be advertised here! Also, for the roadgeeks in the room, I also happened to capture an example of the new and old style Florida state highway signs here (signifying SR 518, the designation carried by Eau Gallie Boulevard from SR A1A near the beach to I-95 on the other side of town). About 6 or 7 years ago, FDOT modified the state highway signs by making the highway number and outline of Florida bigger, probably to increase visibility. The West SR 518 sign is the new version, while the East SR 518 sign is the old version. 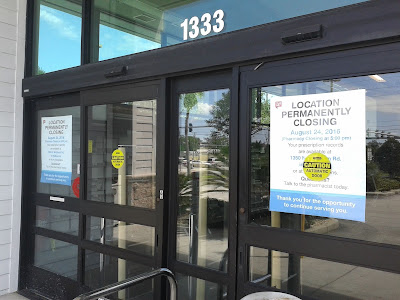 Here is a close-up of the front doors, where two large posters were hung announcing the store’s closure and where its prescriptions were transferred to. The store mentioned on the signs, which is the Walgreens located at 1350 N. Wickham Road, is located about three miles to the west of here on Eau Gallie Boulevard. That store was the next closest one to this location (which seems pretty far to me, as around here it seems like there’s a Walgreens on every other corner!). 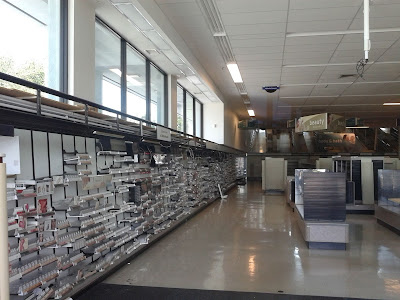 We’ll spend the next part of today’s post looking inside the abandoned Walgreens. Two weeks after the closure, nobody had come to remove the fixtures, which left this rather eerie scene of a dark store with no product in it. Here we are looking straight through the front door, where we can see the beauty department directly in front of us. 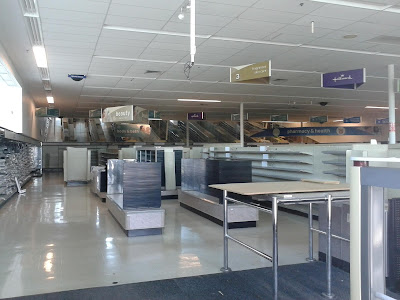 Panning a bit more to the right, we can the rest of the store. In the back right corner was the pharmacy counter, whose signage you can see hanging in the background of this photo. You can also see a few of the empty aisles in this shot too, with all of their aisle signs still hanging as well, marking nothing but aisles of emptiness at this point. 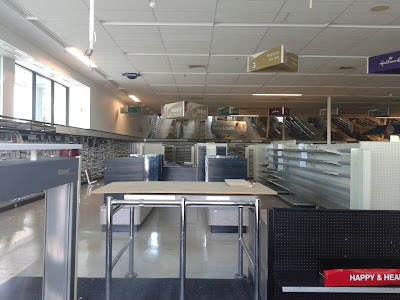 This is another look toward the beauty department, as seen from a vantage point a bit more to the right. While this photo marks the end of the ones I took during my initial visit to this store post-closure, we’re still not done yet with our tour from this place. As you're about to see below, things will get much more interesting from here… 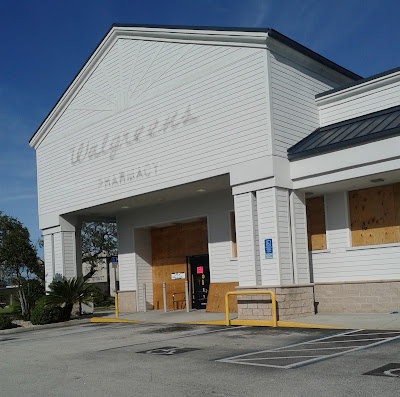 So about a month after my initial discovery that this store had closed, I came by this way again. Hurricane Matthew had just passed, and the former Walgreens was all boarded up – except for one panel where the door was. Taped to the door was a sign saying that a fixtures sale was going on. Since this was only a day or two after the hurricane had passed, no one was around for the sale. So a few days later I had to return and check this out… 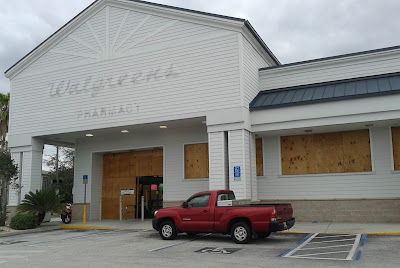 So a few days later I returned to this former Walgreens to check out the fixtures sale and get a few more photos. With Hurricane Matthew sparing much of Florida’s East Coast in October 2016, things got back to normal rather quick and the fixture sale at this old Walgreens was up and running once again. 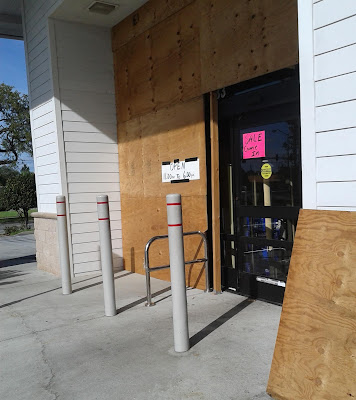 Sale - Come In, reads the sign taped to the door (as uninviting looking as this boarded up place seems). Since we’re being invited in, let’s slide that door open and see what a fixtures sale at Walgreens is all about… 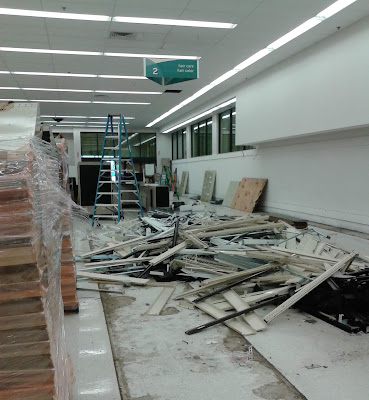 For the remainder of this post, we’ll take a quick peek at the interior of this former Walgreens as seen during the store’s fixtures sale. In this photo I was standing in the former beauty department, which was completely disassembled now. What remained of this store’s shelving was either stacked up on pallets ready to be sold or shipped off to other Walgreens stores, or thrown in a giant heap on the ground destined for the dumpster out back. However, through all of this, that random aisle 2 sign managed to hang on… As YonWooRetail2 commented, "A retail bomb went off!" 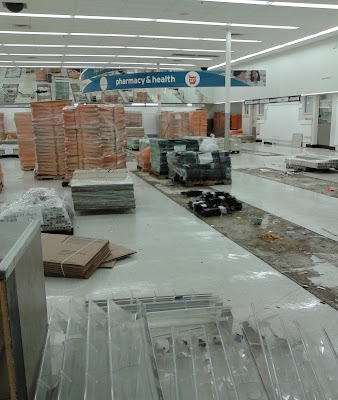 Here we’re looking back toward the pharmacy counter, whose sign was still hanging even as everything around it had been dismantled. The sales floor was now home to many pallets of shelving, which the fixture sales crew was working to package up on pallets. YonWooRetail2 commented, "I always thought those long wall mirrors in Walgreens were neat. I guess CVS doesn't need them because their shelving only goes up about 5 feet." Those mirrors were always a distinctive Walgreens trait. I've actually seen similar mirrors in a really old CVS store before, but that was one built prior to the 2000's outside of Florida. It's pretty odd seeing those mirrors outside of Walgreens though, since that's where I'm most familiar with seeing them. Dave provided us with this interesting little tidbit as well, "Mirrors were also a traditional decor of Longs Drugs in California. The coolest part was when I interned for CVS and the manager let me see his 70s era Longs Drugs Manager's office upstairs. It was like traveling back in time to the Brady Bunch era with 70s style lamps and furniture. As far as I know CVS still hasn't remodeled the manager's office." 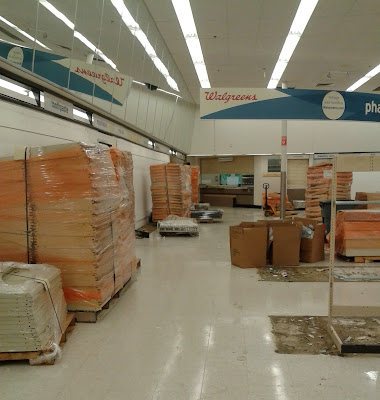 Here is a look across the back wall of the store (home to the wall of mirrors), looking in the direction of the pharmacy counter. 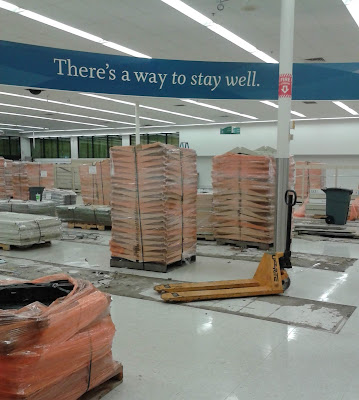 Looking out from the store’s back right corner (where the pharmacy was located) toward the sales floor here. Like I said before, the fixture sale crew was still busy dismantling the store at this point, with most of the workers dismantling shelving and fixtures in this part of the store closest to the pharmacy the day I was here. 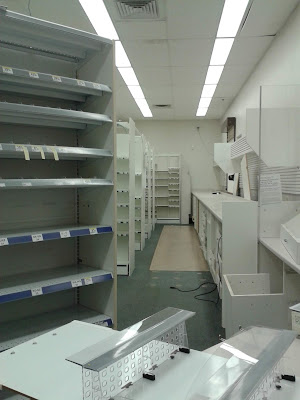 Peeking behind the pharmacy counter, as seen from the window where you could pick up and drop off prescriptions. The fixture sale crew still had yet to make their way in here to disassemble anything. 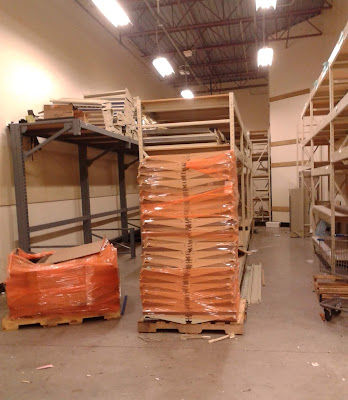 In the back of the building was the stock room, which the fixture sales crew was using to house extra fixtures and to stage large fixtures for pickup at the receiving door. For a small store, this Walgreens actually had quite a spacious back room (which continued for about the same length you see here behind me). 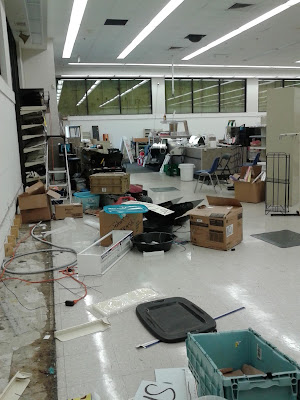 The majority of the stuff being sold at this fixtures sale was consolidated up front, where Walgreens’ front end and registers were located. Outside of this area, about the only other thing to be found for sale were shelves. The fixtures sale looks a bit disorganized and messy from this photo, but the best yard sales and estate sales look like this! Amongst all of this junk up front, I found book about the history of Walgreens, published to commemorate the company’s 100th anniversary in 2001. That ended up being my only purchase this day, but I was quite happy to have gotten that! Maybe one of these days I get around to posting some scans of that book. Anyway, with this photo we will conclude our look at the former Eau Gallie Walgreens. It’s always an interesting experience walking around a store after it closed, as you get to see the place from a whole new (and quite empty) perspective.