Publix #124 originally opened in 1966 as a later era wing store, and the first Publix in Merritt Island. Publix relocated about a mile to the north of here to a larger store at the Merritt Crossings Shopping Center in 1983. This Publix sat empty until at least 1988, when the plaza was renovated and renamed Palm Cay Plaza. Currently the building is split between a Tuesday Morning and Dollar Tree, although I'm not sure what this place was between Publix and Tuesday Morning/Dollar Tree though (as those tenants didn't move to this building until the early 2000's).

Unfortunately, this is the only photo I have of this store in my archives right now. When I took this photo, I took it thinking nothing from Publix remained at this building. Turns out I was way off on that, as Dollar Tree still uses the original Publix entryway! From the streetview imagery, I don't see any other Publix remnants jumping out at me, but it's still nice to see something from the Publix days survived all these years later at this location.

Also of note, the Ichiban Buffet in this photo was a former Eckerd, which I believe relocated to Merritt Crossings in 1983 with Publix. That space became New Century Buffet at some point after Eckerd leaving, and within the last few years, changed names to Ichiban Buffet. On a side note, New Century Buffet had the pleasure of being ranked the #1 dirtiest restaurant in Central Florida by Channel 9's dirty restaurant report that they release a few times a year. They actually got that honor a few times, and were notorious for health violations.

With the history of the original Publix store out of the way, let's head up the road for a look at the 1983-built Publix that replaced this one. Photos of the 1983 store will comprise the majority of this post:

Like I said before, Publix #124 relocated to this location in 1983 to replace the 1966-built Wing store further down Courtenay Parkway. Publix stayed in this spot for 20 years until they built another new store (#893) a quarter mile north on Courtenay Pkwy. in 2003. Around 2005/2006-ish this space was split between Dollar General Market #9859 in the left 2/3rds of the former Publix, and an Aaron's in the right 1/3rd, which has since closed. The Dollar General was a relocation from a store in the old Winn-Dixie plaza across the street.

A wide view of the entire exterior of the 1983 Publix, including the former Eckerd off to the right (where the 'Thrift Store' sign is, but more on that store at the end of this post). This Dollar General Market was one of the first few prototype DG Market stores opened in the mid-2000's The first DG Market opened near Dollar General's Headquarters in Hendersonville, TN in 2003, and they were very slow with opening these stores for a long time. In 2010, Dollar General finally made a push to begin opening more DG Market stores all over the US to rival stores like Aldi and Walmart, and that push included a refresh of the brand. Currently there are a little over 100 DG Market stores operating nationwide, which is actually very small number compared to Dollar General's 11,000 total stores. 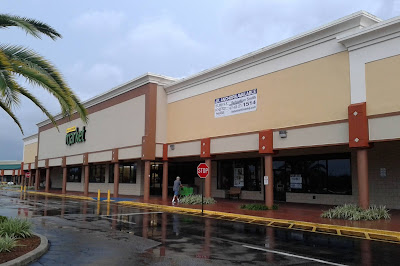 The exterior is just about all original to Publix, except for those windows where the Aaron's space was added. 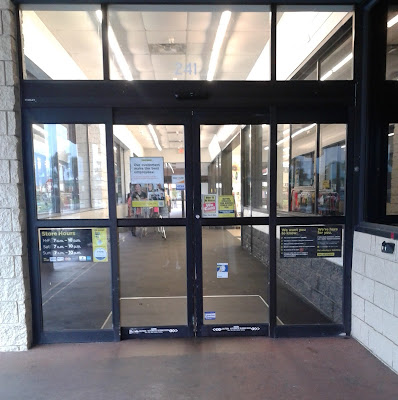 The vestibule is also all original to Publix, including the windows between the vestibule and the main store that were typical of Publix stores from this era. This is the photo where Retail Retell famously commented, "[This vestibule] reminds me of Hobby Lobby." He drew that resemblance from how both Publix's vestibule and Hobby Lobby's had inner and outer sets of windows. Here's a photo of an actual Hobby Lobby lobby (that's actually pretty fun to say!) to compare. Random Retail and l_dawg2000 also agreed there was a very Hobby Lobby-esque vibe here! 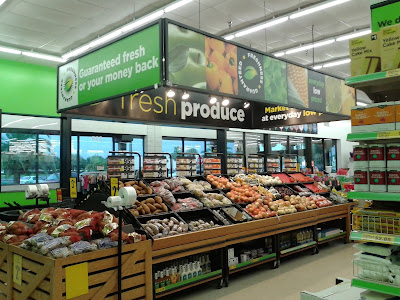 After entering the store and going to the right, you enter the 'market' part of the Dollar General Market, with a pretty decent produce department in the front right corner. You can see the interior windows and the vestibule from Publix in the background. There wasn't much left of Publix once you walked into the store other than that. When the space was split, the flooring and ceiling and most everything else were replaced to meet Dollar General's standards (to which PlazaACME interjected, "Dollar General has standards?!". All the aisles on the right side of the store, which run parallel to the front wall, are the grocery aisles (#1-8), while the rest of the aisles (#9-20) carry the standard Dollar General merchandise 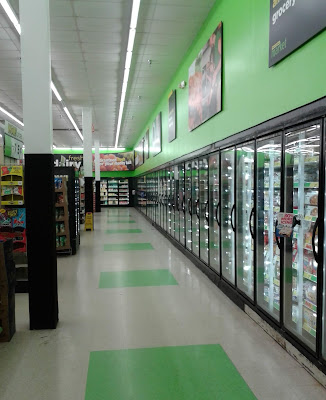 Frozen Foods run along the right side wall, with dairy in the back in aisle 8. This would have been the middle of the grocery aisles in the space's Publix days, and the ceiling would have been raised higher in this area

Another thing to note, the grocery department here is overpoweringly lime green. However, this lime green is quite tame compared to Harvey's Supermarket's and Fresco y Mas's blinding electric yellow interior decor! The interior decor you see here is actually the second iteration of the Dollar General Market decor, installed sometime in the early 2010's when Dollar General began to expand the concept beyond the prototype phase. The original Dollar General Market decor, which this store opened with, was covered rather comprehensively in this album by Random Retail if you're curious to see what that looked like. 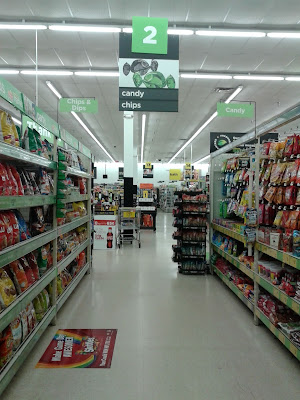 One of the grocery aisles, where you can see across the store into the general merchandise departments. 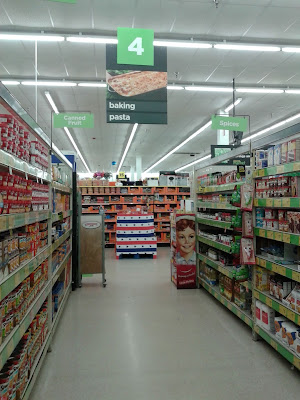 Another grocery aisle. The grocery aisles here feel more like something from Save-A-Lot than a typical Dollar General food department. I think it has to do with those shelves. 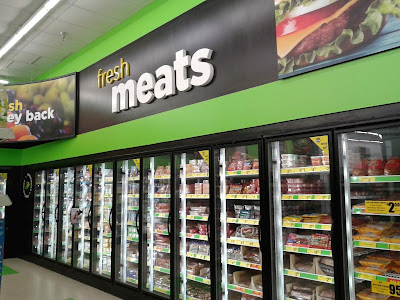 The meat department, located in the back right corner of the store. Dairy continues along the back wall. 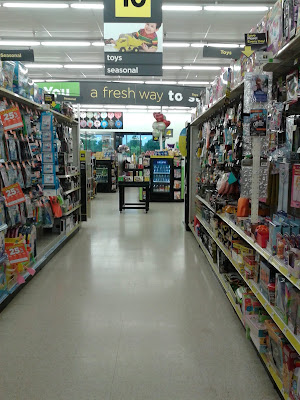 Heading over into the general merchandise part of the store now, here we are looking toward the registers. There are four aisles in the middle of the store that run from front to back, this being one of them. This one was the toy and seasonal merchandise aisle. Behind me toward the back of the store is where all the pet, cleaning, and paper products are kept. That area was full of employees stocking, so I didn’t take any pictures back there. 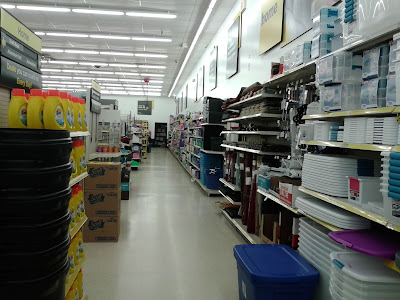 Looking down the left side of the store in this photo, from housewares in the back left toward health and beauty. Over here, it looks and feels more like a typical Dollar General. 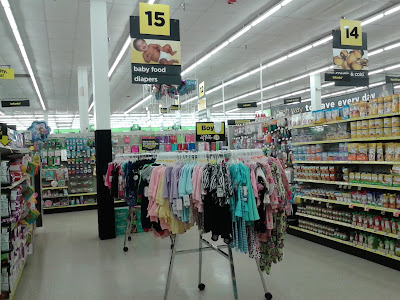 The baby department got an extra wide aisle to allow for the racks of baby clothes to be placed in the middle of it. This store also has a full clothing department up in the front left corner of the store. 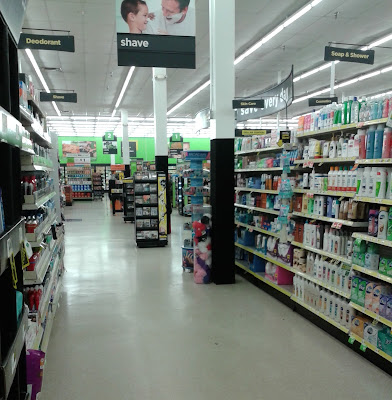 The Health and Beauty Department, which took up aisles 13 and 14. The grocery aisles are also visible in the background. As l_dawg2000 noted, "I guess all the lime green was to make sure the grocery department grabbed your attention. Mission Accomplished!" Dollar General sure picked the right color to grab people's attention with. You can even see the lime green clearly though the front windows from the parking lot! 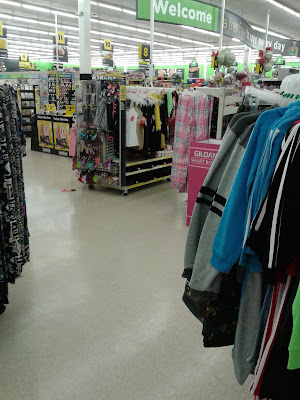 This photo was taken in the clothing department, which is located in the front left corner of the store (formerly the home of Publix's Bakery). Here we're looking back toward the main salesfloor. 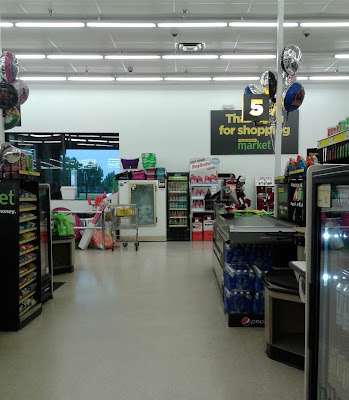 Thank you for shopping Dollar General Market (in an old Publix), except that #5 light just had to get in the way of the sign! 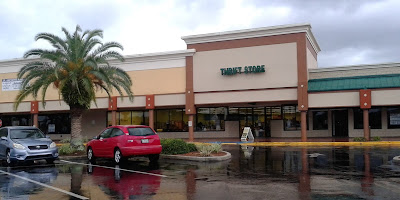 This Eckerd opened in 1983 with the rest of the Merritt Crossings shopping center, replacing an older store about a mile south on Courtenay Pkwy., also next to a former Publix (the one we saw at the very beginning of this post). This Eckerd relocated to a freestanding store on the other side of Crockett Blvd. in 1996 as an outparcel to the Merritt Island Target store. This location became a Goodwill after Eckerd left, although Goodwill moved to a new freestanding store on the other side of Courtenay Pkwy. around 2011/2012 or so. This space sat empty until early 2014, when the I Love My Island Thrift Store opened here.

Even though this photo was taken a year and a half after this thrift store held its grand opening, they still had their 'Now Open' sign set up out front! 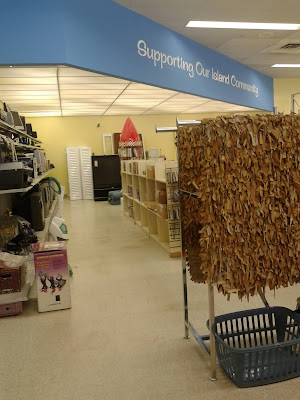 My only interior photo of the former Eckerd space showcases the old pharmacy area in the back left of the store. The pharmacy would have been located under the part of the ceiling that drops lower, prominently featured in this image. That space is currently the I Love My Island Thrift Store's electronics department. And in case you were wondering, that brown shaggy thing hanging on the rack in the foreground is a rug. At least I think it is, as it looks more like one of those nasty mats of seaweed that washes up on the beach! As Retail Retell put it, "Certainly doesn't look like a comfortable rug...!"

So from one Publix to another to an ugly rug, that's all I have for this post. Until the next time,