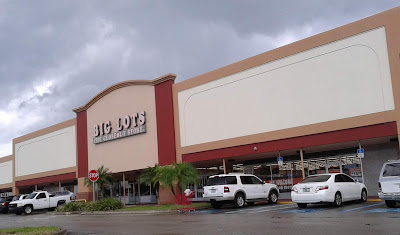 The W.T. Grant store opened with this shopping center in 1959. This Grant't store more than likely lasted until the chain's demise in 1976, or sometime just before that. Big Lots opened in this space in 1995, although I don't know what, if anything, was in this space between Grant's and Big Lots.

The very busy Melbourne Big Lots store, seen here quite a few years ago now. Being the only major discount store of any type to serve the downtown Melbourne area, this store is quite popular with locals. While not anything too exciting anymore, this Big Lots did begins its life as a W.T. Grant store. Behind the facade that was redone in the 90's when the Publix at the other end of the plaza relocated, the original Grant's marble facade still remains. That's really the most interesting part of this store from a retail history perspective, as it appears Big Lots did a pretty thorough reconstruction of the interior when they moved in here. As Houston Retail commented, "Loved this logo, too bad it's faded so much." That's a good 25 years of fading you're probably seeing there! After I took these photos, Big Lots actually replaced this sign with one featuring the current logo, which we'll see at the end of this post. 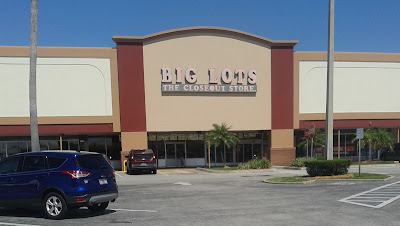 Another exterior view of this place, but from a different angle. 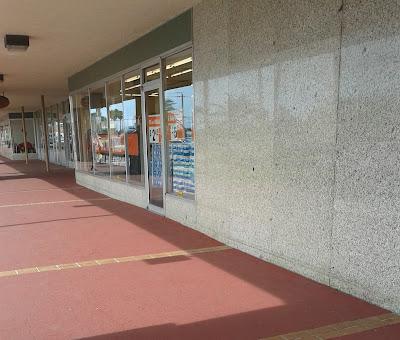 As I said before, one of the only noticeable clues left behind from this store's past as a W.T Grant is the original marble facade and the big display windows original to 1959. The marble front makes for a very classy Big Lots exterior! This Big Lots actually had a near identical twin in Stow, OH, also located in a W.T. Grant store from this era. However, that Big Lots has since closed in order to make room for a new Meijer store being built behind it. 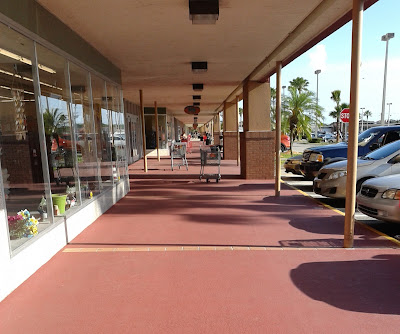 Here's another look down the front walkway in front of Big Lots. These wide, spacious walkways are another typical trait of 1950's and 1960's built shopping centers. 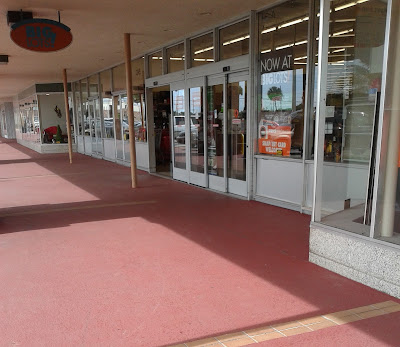 The entryway into the store. I really like how Big Lots kept all the big picture windows intact. When this photo was first posted, Retail Retell thought (for some odd reason) this building was two stories! As intriguing as a two story Big Lots would be, that's certainly isn't the case here! However, it does appear that a two story Big Lots did exist at one time, located in San Diego (store #4287), but it appears that store closed in 2008. 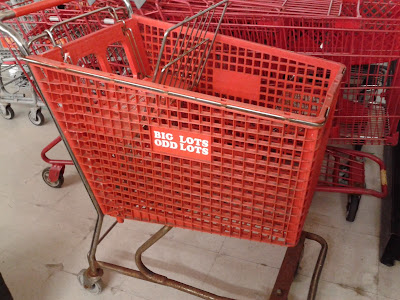 Before moving on to the rest of the store, I wanted to showcase some of the old and interesting shopping carts that Big Lots reuses from other stores.

This one is an old co-branded Big Lots/Odd Lots cart probably from the early 90's. The original name of Big Lots was Odd Lots, however due to a copyright dispute back in the early days of the company as they were trying to go national, they were denied the use of the Odd Lots name in most areas of the country. That decision forced the company to begin calling their new stores Big Lots. In 2001, Big Lots finally dropped the Odd Lots name from any remaining stores and converted everything they owned to the name Big Lots.

Although all the Walmart logos on this particular cart were covered over, this 'Always' logo managed to slip by unnoticed! This was on an early 2000's gray plastic Walmart cart. As Sunshine Photos commented, "I found a cart at Big Lots that still had this intact too! I have a shot nearly the exact same as yours. XD" 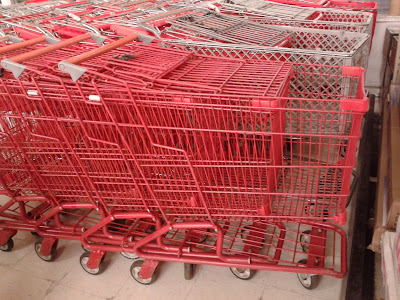 Mixed in with the usual former Walmart and Target carts just about every Big Lots uses, these little red metal carts are probably the most interesting in the entire store. I say that because these carts came from a defunct discount chain North of the Border! I don't know if these were sent down here as a part of a buyout of Zellers assets when they liquidated back in early 2013, or if they came to Florida from a former Big Lots Canada store when the company pulled out of Canada later in 2013. Probably a mixture of both if I had to guess. 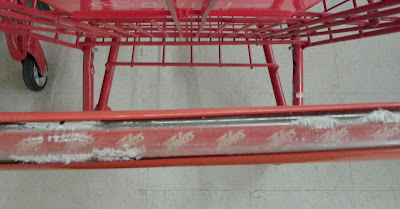 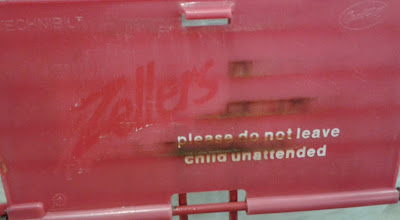 And one cart even had this Zellers logo still completely visible on the child seat flap, even though someone managed to scrape the white paint off of it. As Retail Retell commented, "That's gotta be a tedious job! "We got a shipment of forty carts today... here, I need you to scrape off the white paint from the word 'Zellers' on each of them!"" Yeah, I wouldn't want to be that guy! 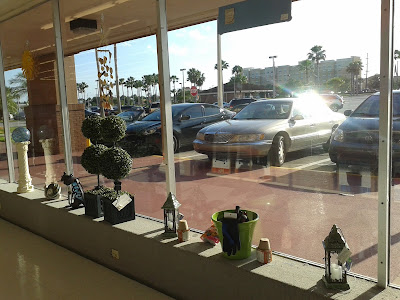 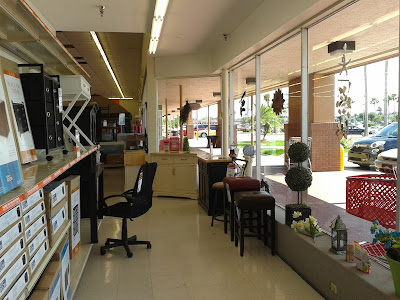 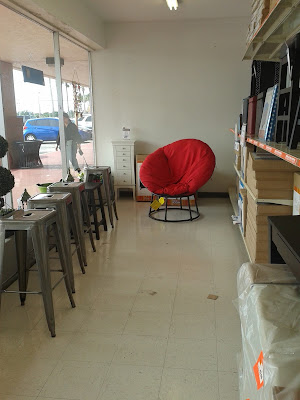 Looking down the little hallway that runs along the front window, here we can see where it dead ends at the wall. I wonder what this area was used for during this store's days as W.T. Grant, or if Big Lots reconfigured the left side of the store after they took over this building. I just find this to be a strange little area. 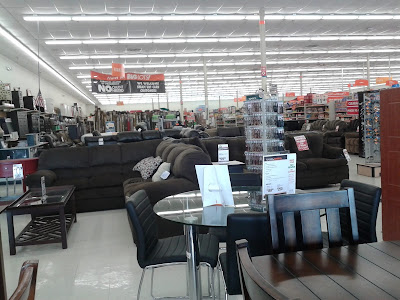 From the front of the store, here is a view into the furniture department. Furniture takes up the majority of the left front portion of this store. 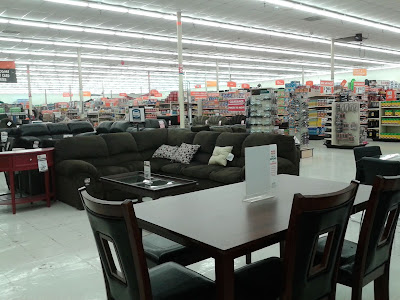 This picture from the furniture department gives an overlook of pretty much the entire store. The Food department is the department in the middle beyond all the furniture. As Devin Blackwood commented here, "Looks nice than the majority of the Big Lots I've been to in Kansas/Colorado! I swear one in Pueblo, Colorado was so nasty that I might have actually had a dirt floor..." 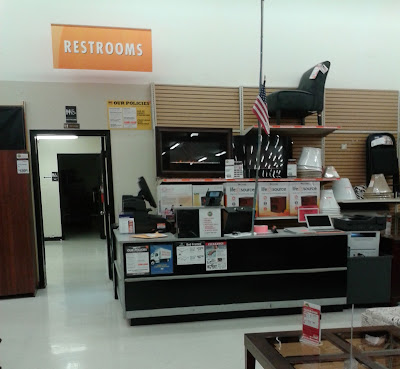 The furniture register and the corridor that leads to the bathrooms. 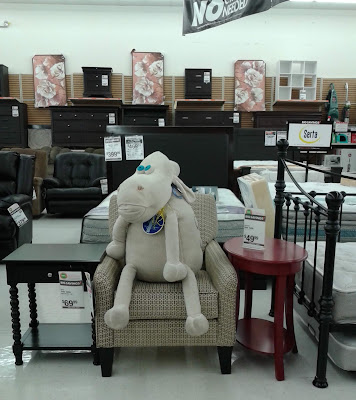 A sitting sheep. This is actually one of those Serta counting sheep from the commercials, usually found flopped on one of the beds (like in another photo you'll see below, taken on a different day). This time, however, someone decided to have a bit of fun positioning Mr. Sheep here. 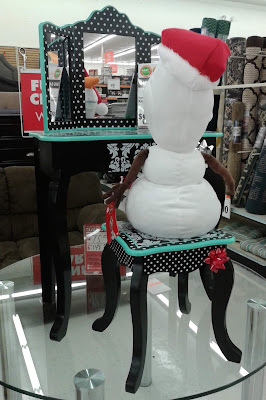 You're so vain, Olaf... You probably think this photo caption is about you. Well, it actually is. I'm not sure if this was intentionally set or if this was just a shopper or employee being funny, but this kiddie vanity was the perfect size for him. I guess you just never know what you'll find in the Big Lots furniture department...

For a little fun, PlazaACME and Retail Retell decided to continue on with my starting sentence here for a little Carly Simon parody of the scene in the photo above:

(a combination of lyrics from AFB, PlazaACME, and Retail Retell) 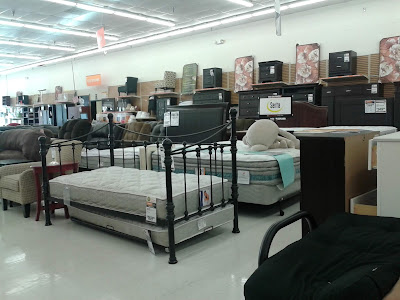 Looking from the back of the furniture department toward the front of the store here. As PlazaACME commented about Mr. Sheep in the background: "Sheep on the bed looks like it just had a pretty high fall. Thankfully, the bed saved him... I would assume." 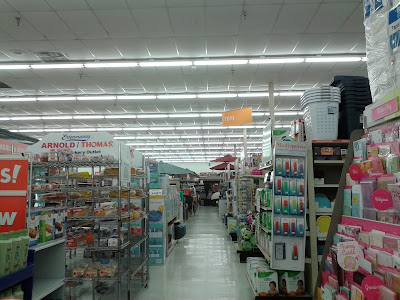 Looking toward the back of the store in this photo, as seen from the perspective of the main aisle that runs along the right side of the store. As Retail Retell commented way back when, "I don't remember ever seeing overhead department signs [at Big Lots] before." Big Lots stores usually have some kind of overhead signs, although they can very quite a bit as Big Lots has gone through a few version of signs in the last few years. However, if I had some more recent photos of this store to post, Retail Retell's comment would actually be pretty accurate! This store removed all of its department signs except for the one over the bathrooms and one by the electronics department. I don't know why they did that, but there's nothing to help guide yourself with in here anymore! 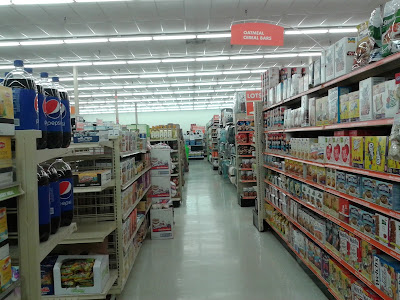 In this photo we're looking toward the back from the main left side aisle. The furniture department is hidden behind those Pepsi bottles to my left. 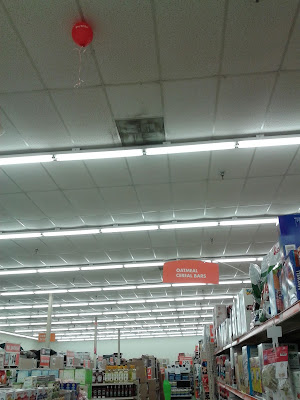 In that same area where I took the previous photo, I spotted this Publix balloon that managed to float up to the ceiling, probably let go by a little kid. 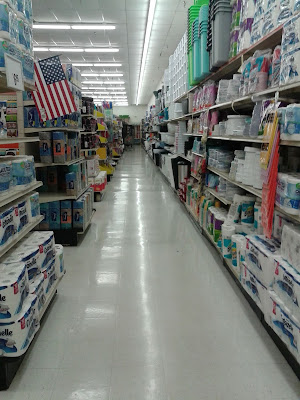 Jumping all the way across the store, here's a view down the right side wall. Paper products are located here, followed by the storage tubs. 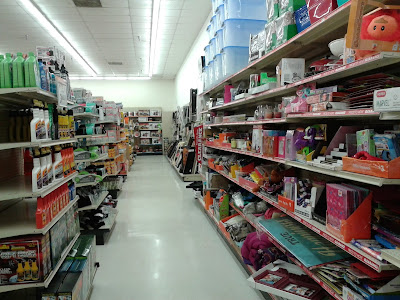 The back wall of the store can be seen here. The only place where this store usually looks messy is back here on this clearance wall, due to people digging though all the boxes of (mostly broken) junk. As Retail Retell commented, "Their clearance sections always seem desperate... you have to think that a lot of these items were already on clearance before even coming to Big Lots (the others discontinued), so to make it to the clearance shelf at Big Lots doesn't bode well..." If you want to see really desperate clearance merchandise though, go to the clearance wall at Ollie's Bargain Outlet! 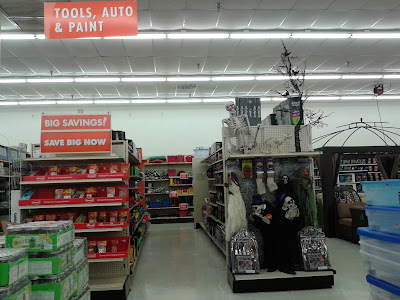 Moving into the store's back right corner, we find the Hardware and Automotive departments. As part of Big Lots' recent push to reimage their stores and merchandise selection, they've cut back most of their selection of hardware and automotive products to the point where that merchandise is now consolidated into an aisle and a half here. That's pretty sad, as Big Lots used to have a decent selection of cheap hardware. 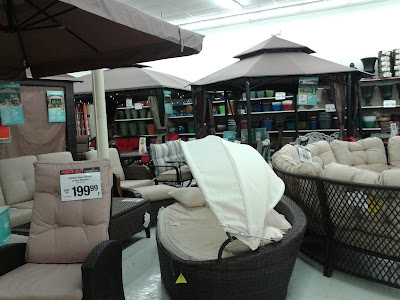 Moving into the back right corner itself we find the seasonal department, home to patio furniture when I took these photos. 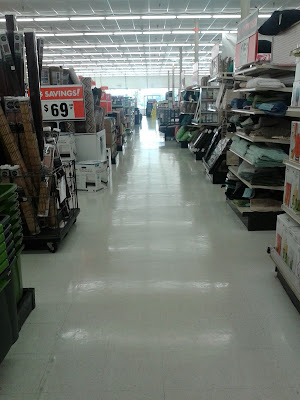 Emerging from the seasonal corner, here's a look toward the front of the store from the left side main aisle. 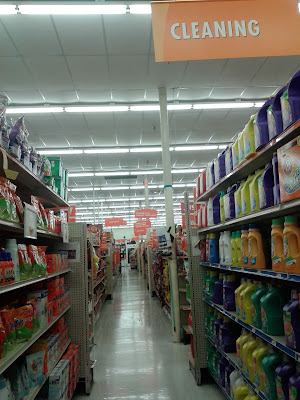 Looking down one of the food aisles in the center of the store, this one being home to cleaning supplies. In recent years, cleaning products have been moved to the right side of the building in order to allow for these back aisles of the food department to become home to, well, more actual food. 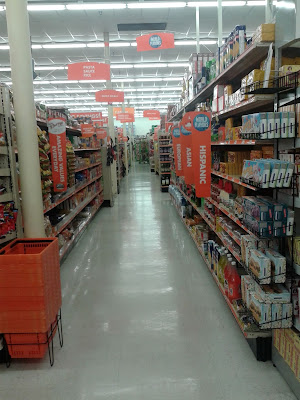 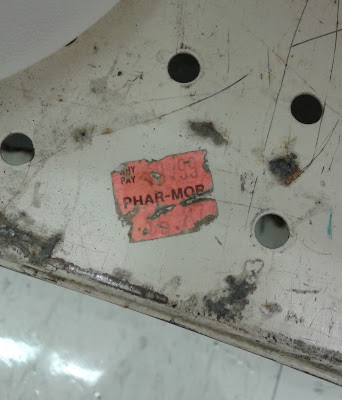 I spotted this old Phar-Mor price sticker stuck to a shelf at Big Lots walking around one day. I was walking by and noticed a weird red blotch on a patch of empty shelving near the seasonal department. I took a closer look and I saw the word Phar-Mor! So now I know where this Big Lots got some of their shelving from… As Retail Retell commented, "Sheesh. I'm surprised they don't reuse, like, old Wal-Mart signs on the exterior and just paint "Big Lots" over it!" When he saw this, l_dawg2000 said, "Seems like it would be bad karma for Big Lots to keep reusing stuff from famous defunct retail store chains!" 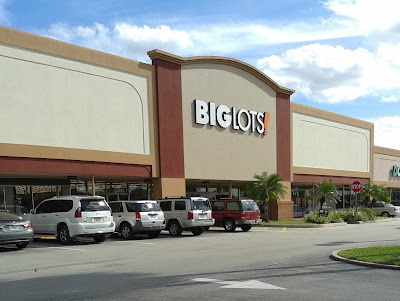 To "closeout" this post (please AFB, stop with the cheesy puns already - we the readers beg of you!), here's a photo of what the exterior of this store looks like now. The new sign actually looks pretty good up there. I thought it was strange seeing the logo with white letters when I first saw this sign, but I've come to see now that Big Lots like using the white letters on many of their new stores over the traditional black letter logo. Besides the updated logo on the front, the inside of this place still looks the same now as it did in the really old photos you just saw (with some of the merchandise moved around to different aisles being the biggest change).

So that's all I have for now. While Retail Retell works on setting his royalty dispute with Carly Simon, I'll find some more photos to post for everyone! Until the next time,