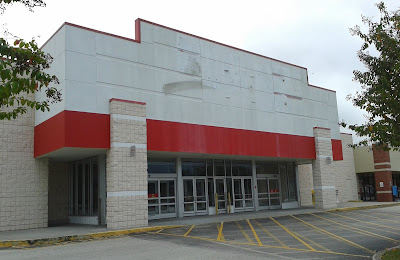 This Kmart opened in 1993 as the second Kmart in Winter Haven (with the original being store #3461, a 70’s store on the north side of town that remained in operation until the 2003 bankruptcy closings). In May 2014, a large sinkhole opened in the parking lot of this shopping center, between Publix and Kmart (more on the sinkhole in just a moment). Unrelated to the sinkhole activity, this Kmart would later close in October 2014. The store is currently vacant, although there appear to be plans on the landlord’s website that suggest the owner wants to subdivide the Kmart space for smaller tenants.

Today's post will feature one of the many vacant Kmart stores I have photographed in my archives (and don't worry - there are plenty more vacant Kmart photos where these came from!). The vacant Kmart building that is the star of today's post is located in Winter Haven, on the southern side of town. This Kmart was your typical early 90’s Kmart in design, built across the street from the Cypress Gardens amusement park (now Legoland Florida) in a shopping center that also included a Publix. This Kmart lasted for 21 years before finally closing in late 2014, and is still sitting empty today. In this photo, not only can you see the labelscar from the Big Kmart sign this store kept all the way to the very end, but also the brackets from where the logo was when this store first opened in 1993! 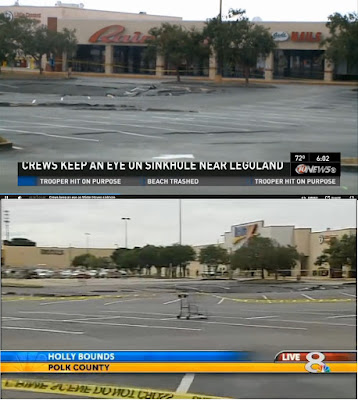 As I mentioned at the beginning of this post, a sinkhole opened in the parking lot of this Kmart store in May 2014. The screenshots above show some of the better angles of the sinkhole that I was able to find, one of which shows the former Kmart in the background. The story here states that on the morning the sinkhole first formed, an employee from the Publix next door to the Kmart noticed a rippling in part of the parking lot as she was coming into work. She notified authorities, and that section of the parking lot was roped off. Thankfully the employee reported what she saw, because that ripple later developed into an 85 foot wide, 15 foot deep sinkhole! Thankfully, nobody was hurt from the sinkhole because that employee caught it before all of the stores in the center opened for the day. 4 small stores in the plaza were closed as a precaution due to the growing hole, however Kmart and Publix remained open for normal business. Even if the Kmart store did get sucked into the hole, it really wouldn't have mattered, as this store would end up closing just a few months later! Due to this store's location across the street from Legoland, this hole became quite the tourist attraction once word got around about its presence. The news agencies were reporting that groups of people were taking photos of the sinkhole, and some were even taking selfies with it! It's not a true Florida vacation until you get a selfie with a sinkhole! The two screengrabs I used to make the above image came from online videos posted by WTSP and WFLA news, both of which are stations from Tampa. If you live in Florida or come here often, you know sinkholes are a common occurrence here (especially in the center part of the state). A sinkhole actually caused the demise of a Kmart store in Lake City, FL in the early 2000's, so this wasn't Kmart's first run in with sinkholes. 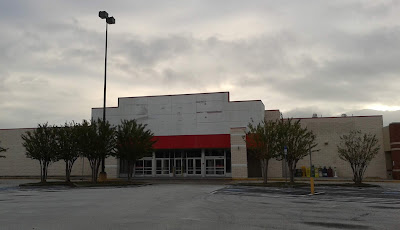 These 90’s Kmart were some of the nicest Kmart stores out there, so it’s always sad seeing these closed and abandoned. This is another overview of the front entrance, taken from further out in the parking lot. 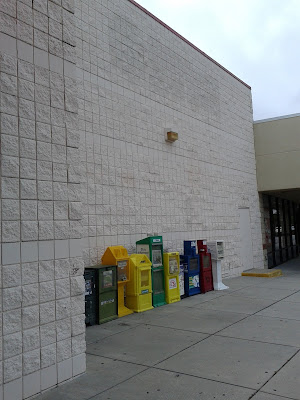 A close-up of the Little Caesar’s Pizza Station labelscar on the right side of the building. This store kept its Little Caesar’s all the way until it closed in 2014. It looks like some of the people who service those newspaper boxes have also given up on filling them since Kmart closed. 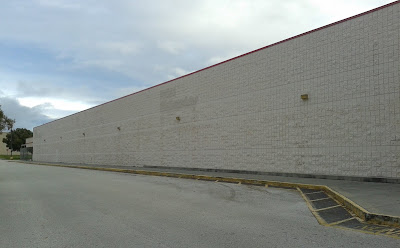 Turning our attention away from the main entrance, here is an overview of the left side of the building. Here you can see the pharmacy labelscar, as well as the garden center off in the distance. 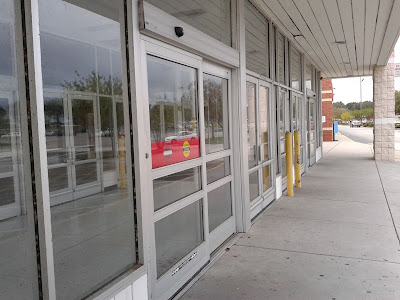 The set-up of this store's entryway was typical of what you'd find at an early 90's Kmart. 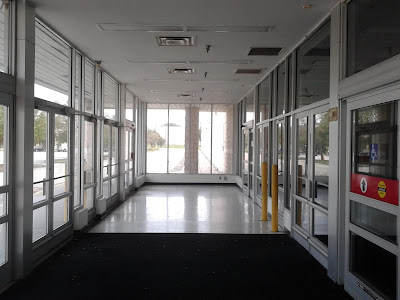 A look inside the vestibule, as viewed from the side windows. 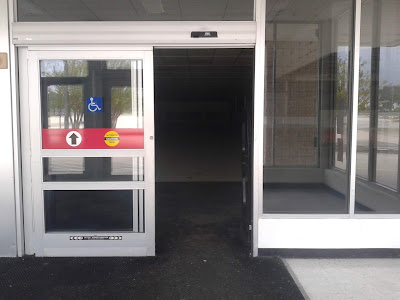 Since somebody left this door open, we’re able to get a (small) glimpse inside the store itself. Customer service and Little Caesar’s were to the right after walking in, with space that was once home to the clothing departments visible straight through the open door. 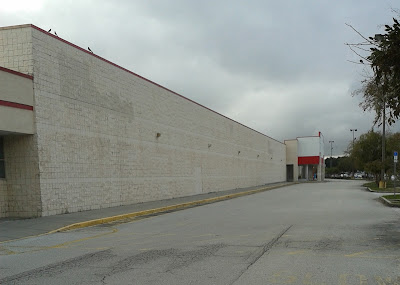 Moving toward the garden center for another look across the front of the building. The “Kmart Garden Shop” labelscar is visible here, with the entryway off in the distance. 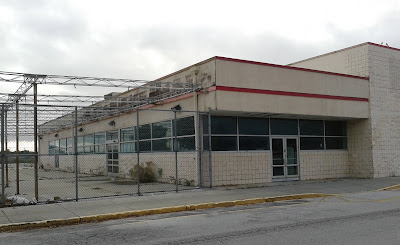 On the far left side of the building is the former garden center, of typical early 90’s design. 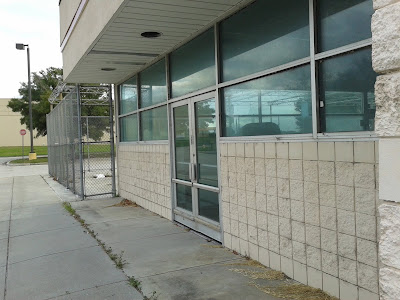 A close-up of the garden center entrance. 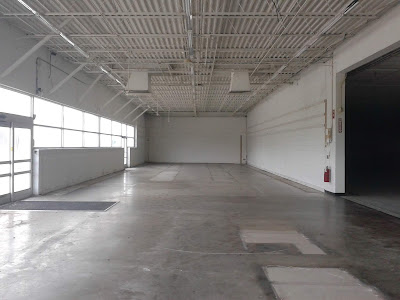 A peek through the front doors of the garden center gives us this view of the empty interior. The scars from the register stands and the aisles are still visible. 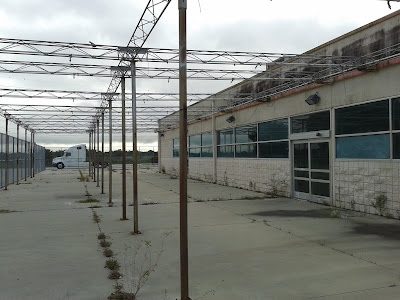 Only a year after this store’s closure, the exterior portion of the garden center was already looking a bit unruly. With this place just over four years empty now, I wouldn’t doubt it if some trees have begun to pop up in those cracks… 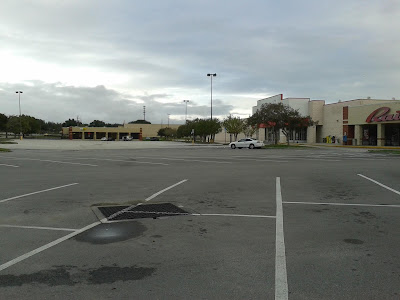 Looking back toward the former Kmart building from the parking lot near Publix. I took this photo from the area where the sinkhole I discussed earlier had opened up, which by now had been long patched and repaved (and thankfully did not reopen as I took this photo!). 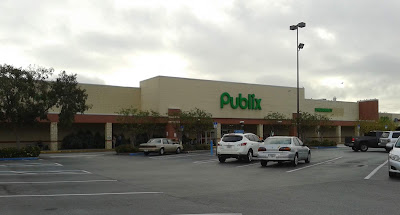 And speaking of that Publix, here it is! This is Publix #448, located at 6031 Cypress Gardens Boulevard, Winter Haven, FL. This Publix opened in 1993, around the same time as the Kmart store that was also in this plaza. Overall, this Publix is a fairly typical mid-90’s store. I only took this one photo of the Publix since I didn't have time for a full run through the interior, but you can get a feel of the interior in these photos posted to Google. 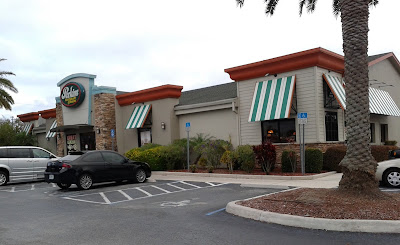 Before I finish off this post, I have a few more photos to share of some other places in the area of the former Kmart store. First up is this Perkins restaurant, located at 6005 Cypress Gardens Boulevard, Winter Haven, FL. This restaurant originally opened as a Shoney’s in 1993 as an outparcel to the new Winter Haven Square Shopping Center. At some point in the very early 2000’s (probably in the 2000-2002 era), this Shoney’s location closed and was converted into a Perkins.

Perkins did a decent amount of remodeling to this restaurant when they took over the former Shoney’s. Other than the peaked roofline visible on the right side of this photo, there really isn’t much to see from the exterior that looks very reminiscent of a Shoney’s (although this is a pretty odd looking Perkins). 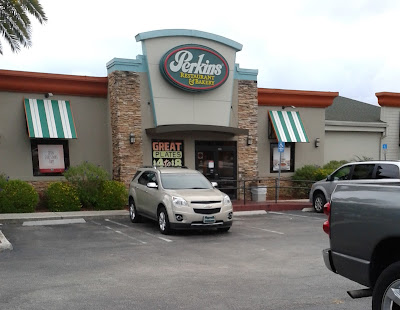 A close-up of the entryway into Perkoney's Perkins. 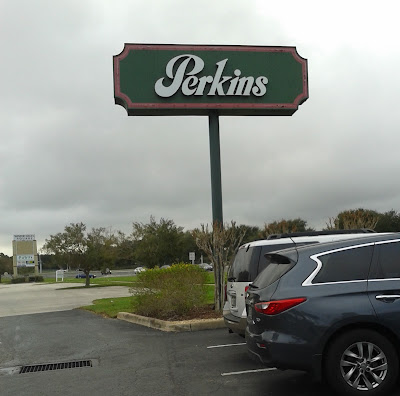 So how did I figure out this building was a Shoney’s, you ask? While the restaurant building was heavily remodeled, the road sign…not so much! This road sign is still in the shape of Shoney’s logo, with Perkins logo forced into that rather distinctive shape. I’d have to guess that the neon trim around the edge of the sign is also original from Shoney’s, as that doesn’t seem like a detail Perkins would have bothered installing themselves. 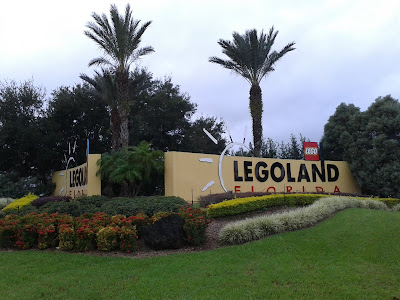 @Random Retail – this photo is for you!

Located across the street from the Publix/Kmart plaza we just finished taking a look at is Legoland Florida. Before Legoland, this site was originally home to Cypress Gardens, a botanical garden which opened in 1936, and would later add amusement rides in addition to the gardens. With a 1936 grand opening, Cypress Gardens was Florida’s first theme park (predating Walt and his mouse by 35 years, whose eventual opening would later turn Central Florida into theme park central). After the opening of Disney World in 1971, and the retirement of Cypress Garden’s founders in the early 1980’s, Cypress Gardens began a series of ownership changes and faced a steep decline in visitors. After numerous failed attempts to rebrand themselves and add new attractions, Cypress Gardens officially closed in 2009. In early 2010, it was announced that Merlin Entertainments bought the Cypress Gardens property, and announced they would be converting the park into Legoland Florida – the United State’s 2nd Legoland. Legoland Florida opened on October 15, 2011, refurbishing many of Cypress Garden’s former attractions (such as the roller coasters), as well as completely preserving the botanical garden portion of the former Cypress Gardens. If you’d like to read more about the history of Cypress Gardens, these are some good articles about the park’s history: 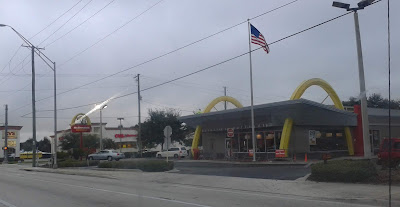 Lastly, we will end this post with a side of fries. While not a part of Winter Haven Square, this McDonald's was right down the street, so I figured this post would be the best one to include this photo with. Anyway, located at 893 Cypress Gardens Boulevard, this McDonald’s opened in 2006 as one of the “throwback” style McDonald’s restaurants. It replaced a mansard roof location on this same site that probably dated back to the late 70’s or early 80’s. As I drove by here, this particular McDonald’s was in the middle of a remodel, although the finished product still retained the throwback look (mostly the big arches on each side, though). While much of the prior look was preserved (which can’t be said about the mansard roof to eyebrow remodels), I still think the 2006-2015 version was nicer, and much more of a “throwback” than what is here now. One good thing though, the classic McDonald’s road sign still lives (slightly glared out in this crummy through the windshield shot though), even after the remodel! I’m not sure if that sign is original to when McDonald’s first opened on this site, or if it was installed to compliment the “throwback” building when it opened in 2006. Either way, it’s still pretty neat! I’m pretty compelled to say the sign is original though, as the other Winter Haven McDonald’s also retains its original road sign to this day. Maybe Winter Haven has some kind of strict signage code McDonald’s was grandfathered into, as it seems weird one town would have two McDonald’s with such old signs!