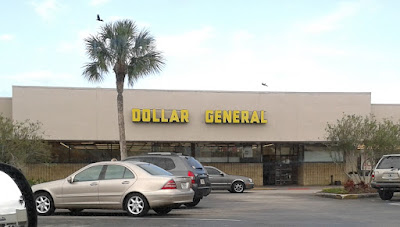 Eckerd originally opened with the rest of the shopping center in 1979. They relocated diagonally across the intersection to store #2039 in 2001 (we'll see that store later in this post), which became CVS #3294 in 2004 when they purchased Eckerd's stores in Florida and Texas. Dollar General opened here not long after Eckerd left, and closed in June 2014 when they relocated to a freestanding store at 4290 Babcock St., a little north of here. The space is currently vacant, and one of three vacant anchors in this shopping center.

And now we return to the Palm Bay Center, home of the former Palm Bay Kmart, this time to look at its former Eckerd/Dollar General store. This photo and the two interior ones were taken back in April 2014, and still show the Dollar General in operation. 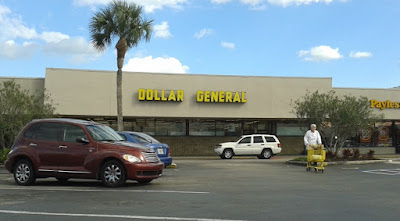 Another exterior photo, but from January 2014. 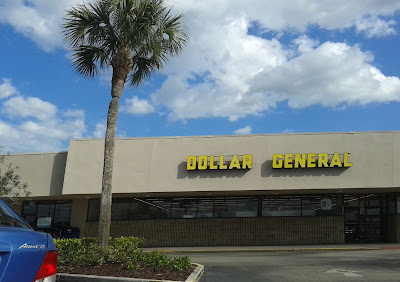 I nearly scrapped this photo, but at the last minute I decided to upload it anyway. It's an interesting view. This was one of the very first retail photos I ever took, and one of only 3 I've ever deemed good enough to upload from that first day. As Retail Retell said, "Wow! Cool story!" 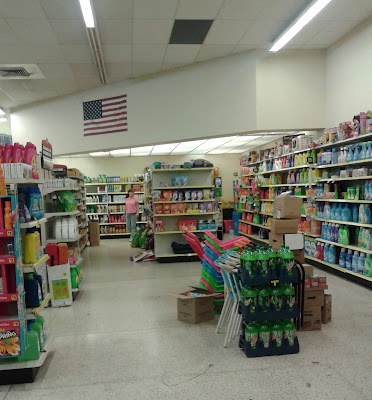 Stepping inside the Dollar General for a moment, here's a look down the back wall of the store toward Eckerd's old pharmacy counter. These lower ceilings sometimes get removed by later tenants during remodels, so it's neat to see this glaring Eckerd remnant remain here. 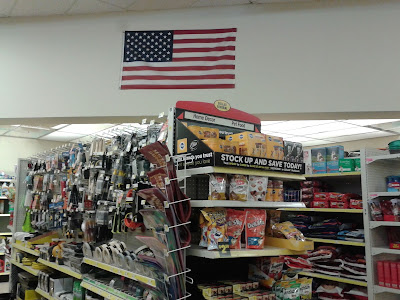 Close-up of the American flag Dollar General hung on the lower ceiling where Eckerd's pharmacy was once housed. I thought it was a nice touch to the store. 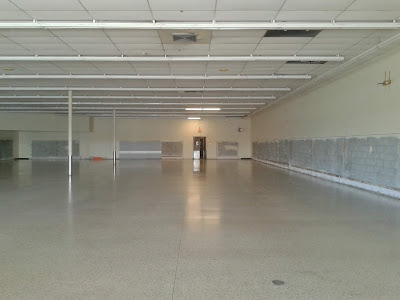 And here's a quick photo of the interior of the former Eckerd/Dollar General as of January 2015, as a follow-up to the photos of this place from January and April 2014 above. I couldn't get a good exterior photo of this place in its current empty form due to a bus parked out front (which never moved the whole time I was here), which made a clear view of the exterior difficult to get. Sometime in 2017, this space would eventually be filled by NAPA Space Coast Auto Supply, which you can see some photos of here (as I haven't gotten any more photos of this place since). As andsome96 said, "There's a bit of charm to these strip-mall Eckerd stores built in the 70s-80s era. While they were a bit on the narrow side, they felt more quaint in that respect." 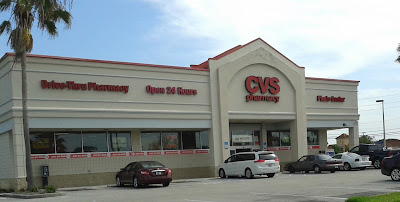 To wrap up this post, here's a look at the store Eckerd #84 relocated to. This Eckerd opened in 2001 and was built on the site of former Scotty's Hardware #79 (whose address was 4690 Babcock Street NE), along with the neighboring Staples store (not pictured - it's to the left of this store). Scotty's was a chain of hardware stores that was based out of Winter Haven and had locations across Florida. Scotty's remained in business until 2005, when the company went bankrupt due to increased competition from Lowe's and Home Depot. This store became CVS #3294 in 2004 when they bought all of Eckerd's stores in Florida.