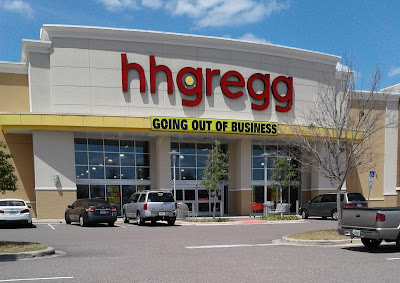 This hhgregg opened in 2009 as one of the 6 major anchors to the newly built Hammock Landing shopping center in West Melbourne. This location was supposed to survive hhgregg's bankruptcy should they have found a buyer, however when that didn't happen, this store began to liquidate with the rest of the chain. This location closed in May 2017 with the remaining hhgregg stores nationwide.

Next up for the My Florida Retail Blog will be a short post from the West Melbourne hhgregg store, the only hhgregg that operated in Brevard County. Somewhat rare for hhgregg in their post-Circuit City era rapid expansion, this building was built from scratch as an hhgregg. In the original plans for Hammock Landing, this space in the plaza was originally supposed to go to Linens N' Things. However, shortly after the plans for Hammock Landing were released to the public in 2008, Linens N' Things declared bankruptcy and announced they were closing all of their remaining stores, leading them to cancel their plans for a store here. The developer of Hammock Landing was able to attract hhgregg to be the new anchor for this plaza after Linens N' Things went bankrupt, and the space was redesigned for hhgregg before construction at the site began. Although I was only in this store one time prior to it liquidating, it never seemed to be as busy as their closest competitor, Best Buy, at least to me anyway. That was probably one of the many reasons hhgregg was having the financial troubles they were having the last few years. I'm sure the rapid expansion in the late 2000's didn't help much either. 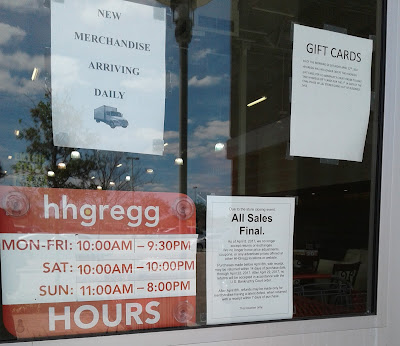 Some of the many fliers taped to the window about the changes to store policy going into the liquidation, as well as some other announcements. In addition to all of that, the store hours sign also managed to sneak its way into this photo. 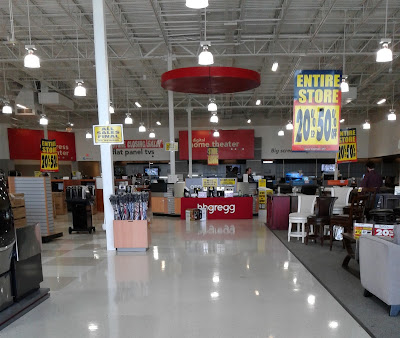 This was the sight you would see upon entering this hhgregg location. This store was laid out like every other modern hhgregg store - furniture to my right, electronics in the back, and appliances shoved into a small space to my left. Not to steal l_dawg2000's thing, but I have one addition of my own I'd like to add to his list of hhgregg issues: hhgregg issue #29: An electronics store that dedicates most of its salesfloor space to furniture and shoves the electronics in the back isn't a good sign! I've always thought of hhgregg as something similar to Best Buy - a store that sold mainly electronics but also had some appliances. During my one visit here about 6 months before the liquidation, all of the space around me in this photo was filled with displays of sofas, recliners, dining tables, etc. I thought it was odd, as hhgregg would have never been a place where I would have thought to look for a couch. I guess in one of their final attempts to stay afloat was to start shifting into the furniture market, which didn't seem to work well. As l_dawg2000 commented, "Ha, no problem! I agree, seems they had a lot more furniture in the Southaven store than in years past, with lots of empty space where electronics once were. Almost seems like they were sort of stealing Kmart's recipe, which is a sure sign of desperation! [Also, I] just noticed one other thing in your photo: if you look right under that exit sign in the back part of the store (just to the right of the mattress center), there's a restrooms sign with a blue design on it. This same previous décor sign was still in the Southaven store also." Hmm, I completely missed that restrooms sign when I was here! I can't believe I didn't catch that, as I made sure to get photos of the electronics and mattress department from a spot that was practically in front of that sign! 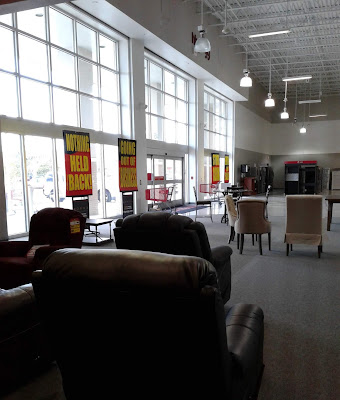 Looking across the front of the store from the front right corner in this photo.Here you can see some of the remaining furniture I mentioned previously. At this point in the closing (about three weeks in), the furniture, mattresses, and appliances didn't seem to be moving, however the selection of electronics was beginning to grow bare. 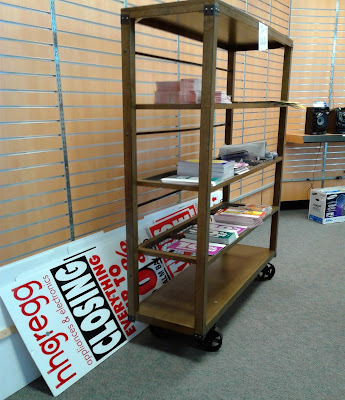 In the corner behind the furniture was the store closing signage station, filled with all the % off tags one could need. Behind that were some signs for someone to hold up at the corner of Palm Bay Road and Norfolk Parkway, although nobody seemed to have the desire to stand outside in the humid 90 degree Florida heat with one this day! 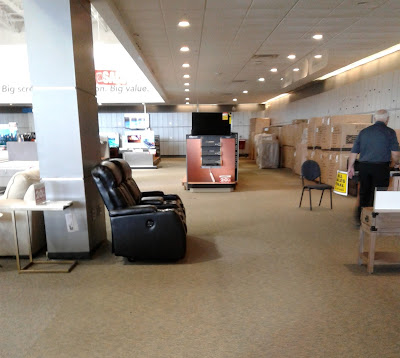 Moving over to the far right side of the store now, here we can see from the edge of the furniture department toward where electronics begins. Along the right side and back of the building is this area with a lower ceiling over it. To my right was a desk where a few salespeople were sitting and talking among themselves. As l_dawg2000 commented, "This was the area of the Southaven store I remember seeing a lot of electronics in several years ago. Looks like furniture overstock here, but was nearly empty on this side when I went to the one in Southaven. And that was only about a week into the liquidation." 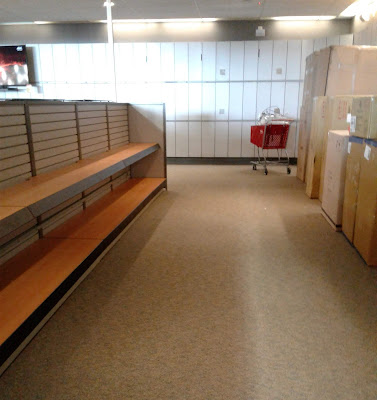 An empty aisle in the electronics department. The boxes to my right were more pieces of furniture that needed to be sold off. 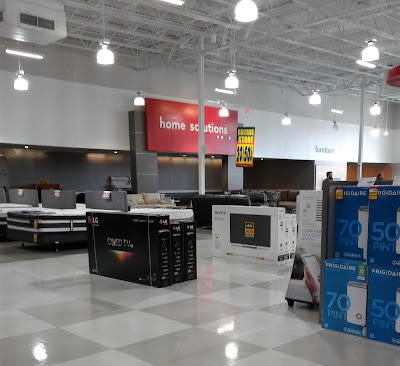 Looking toward the “home solutions” department – aka furniture. As the furniture displays began to sell down, some mattress displays were dragged out onto the main salesfloor from the mattress corner in order to make the salesfloor look less empty. Some other random overstock electronics and appliances were brought out onto the floor as well in order to fill in the empty space. 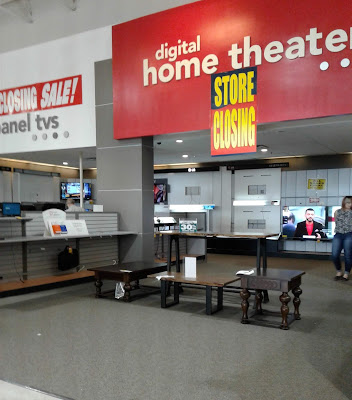 This was supposed to be the “grand aisle” of the electronics department, which had been pretty much picked bare by this point in the closing. Some more of that hhgregg furniture was dragged over here to fill in the empty void, and possibly convince someone looking over the remaining electronics to take a coffee table home with them too. 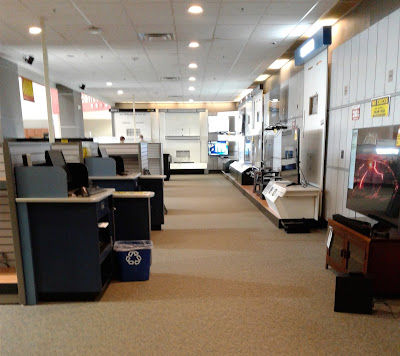 In this photo we see the back wall in the electronics department. All that was really left in this department were a few display TVs and some random cables and accessories. 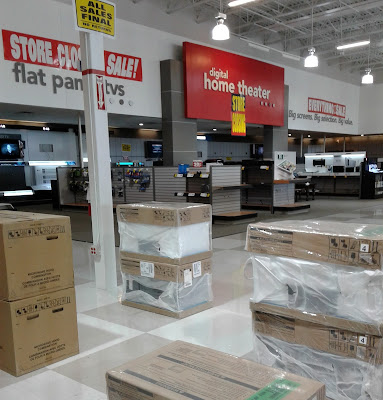 This is an overview of the space to which the electronics department was confined to in this store's later days. As you can see here, this part of the store was quite empty three weeks into the liquidation. 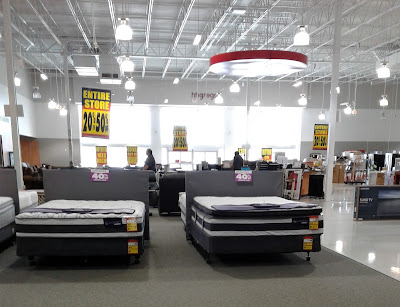 All of the sunshine coming in through the front windows wasn't too kind to this photo, but you can still get a decent look over the main salesfloor here. This space was home mostly to furniture in recent times, with the mattresses directly in front of me dragged out from the mattress center in order for them to get better exposure for the liquidation. 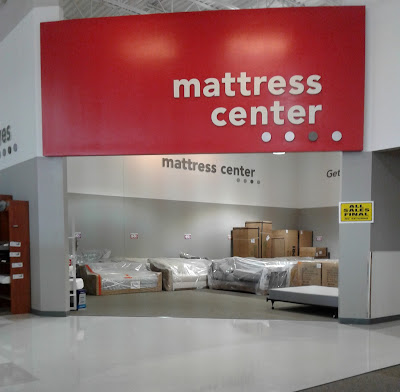 Like in most modern hhgregg stores, the mattress center was a walled off alcove located in the back left corner of the store. There were still a few mattresses buried back here, however this corner was mostly used to house overstock sofas and recliners for the liquidation. 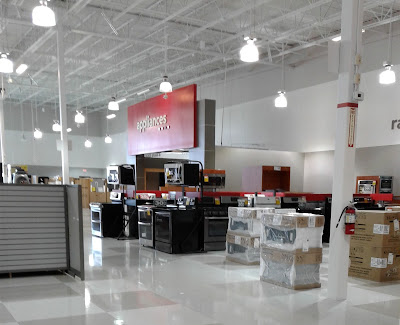 The left side of the store was dedicated to appliances. Immediately to my right was a "showroom" type area with small sample kitchen displays, as well as the display ovens. Off in the distance were multiple aisles of refrigerators and washing machines. 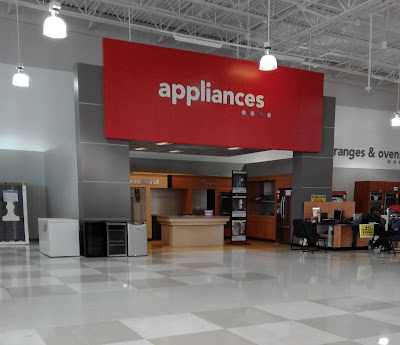 A closeup of the main sign for the appliance department. Under the big sign and to the right of it were kitchen showroom stations, and to the left was open floor space for rows of appliances. 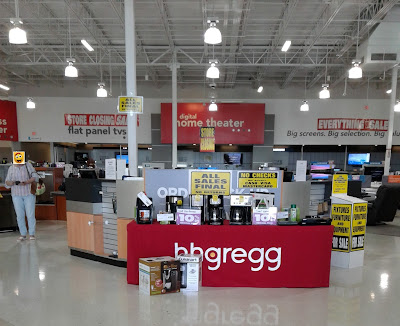 The main register counter was located at this circular island in the center of the store. In front of the register counter was the sign-up sheet for those interested in buying store fixtures, as well as a table of coffee makers (which included a custom hhgregg tablecloth too). 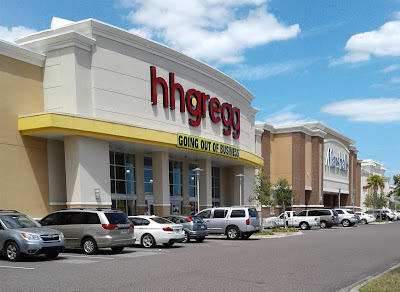 Heading back outside for one last look at the now-former West Melbourne hhgregg. Next door you can also see the Hammock Landing Marshalls, and beyond that is Petco. Honestly, I think Marshall's should take over the now vacated hhgregg space to expand their store into a Marshall's/Home Goods combo store, much like the TJMaxx/Home Goods combo that opened in Viera in 2014. That's my idea anyway. This plaza is busy enough that they should be able to figure out something to do with this space before too long, hopefully.

The photo description you just read was written shortly after this store closed in 2017. By late 2018, just what store was announced to be opening here? As Cape Kennedy Retail said, "You called it." 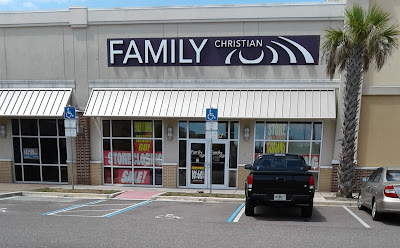 In addition to the hhgregg closing, as I was leaving that and walking back to my car, I saw this out of the corner of my eye. Hammock Landing was also home to a closing Family Christian Store, which also liquidated the same time hhgregg did. To be completely honest, I had no idea this was here! From the looks of it, this was the only Family Christian Store around for a good distance in each direction. I didn't go inside, but I did get this one photo of the exterior. This place probably opened not long after Hammock Landing was built in 2009, and was about two months into their liquidation at the time I took this photo. As styertowne commented, "I have never seen that logo before. Truthfully, I have only seen this store on Flickr, but it has always been a different logo. The idea of a Christian department store intrigues me!" J. Mc. went ahead to explain to us what Family Christian Stores were all about: "[Family Christian was] basically a Christian products store that sold various bibles, study guides, books by Christian authors, sunday school stuff, and various Christian themed items like WWJD t-shirts, and of course, a big selection of Christian music CDs. Since streaming music, Ebay, and Amazon pretty much cover all of that now I'm not surprised they've fizzled and gone out of business."

For further coverage of the former West Melbourne hhgregg store, as well as some photos of it now as a HomeGoods, Cape Kennedy Retail did a post about this store which you can read here.