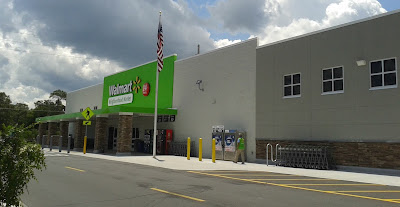 The right side of the Neighborhood Market building can be seen here. The rightmost portion of the building was painted Pickup counter orange, even though that space is supposed to advertise the Pharmacy drive thru. While I didn't have the time to go inside, a quick peek through the front door showed the interior is essentially an exact copy of what you can see here, featuring the Neighborhood Market variant of the new Black 2.0 interior and the new layout (and not the more fun variant of that decor either, which would eventually replace the decor seen at that link).

So that's a really short post from me for a change! Until the next time,