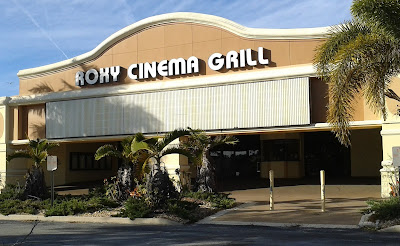 This movie theater originally opened in 1991 as the Cobb Roxy 10 Cinemas, one of the 3 Cobb Cinemas opened in South Brevard in the late 1980's/early 1990's. Eventually Cobb sold off their 3 South Brevard locations, with all three theaters being purchased by small movie theater operators or independent owners. This particular location was sold to Phoenix Big Theaters, who turned this place into the Roxy Cinema Grill. Roxy Cinema Grill lasted until September 2013, although the closing of this place was due to a rather unfortunate circumstance. The theater's closing coincided with the impending discontinuation of releasing new movies onto 35mm film. The owners of Roxy Cinema Grill cited the cost of converting this location to digital would have been too expensive, and chose to close instead of convert. This building is still vacant as of January 2019, and I doubt it will become a movie theater again once someone decides to open something in here. Just a bit further down Palm Bay Road a new Carmike (now AMC) Theater opened in the Hammock Landing shopping center in August 2014, which would be tough for a new theater in this building to compete against.

While My Florida Retail usually features posts about supermarkets, malls, and other major retailers of past and present, it's possible that some other things like restaurants, movie theaters, and other types of businesses can pop up on here too. This former movie theater is particularly interesting, as it has hardly been touched since Cobb opened this place in 1991. The fact that this movie theater is abandoned and located in a practically dead shopping center just adds to the fun! So let's go ahead and see what this place is all about... 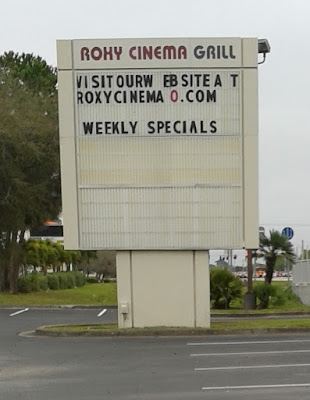 But before taking a closer look at the building, here's a quick photo of the road sign. Even when I took this photo two years after this place closed, some lettering still remained on the board. I wonder what kind of special they're having this week... As andsome96 predicts for this week's special: "Depending on how long this theater sits closed, I'd say the "special" would be the decor/equipment that gets auctioned off."

Even as of January 2019 the lettering is still on the sign, although a lot more letters have fallen off since. 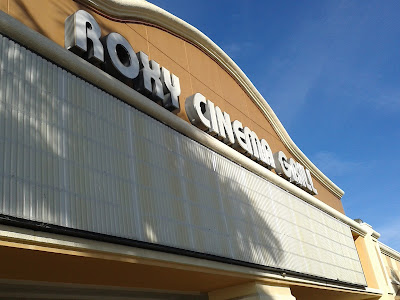 Closeup of the signage and marquee still on the front of the building. In case you were wondering, this place was called a 'cinema grill' because when you went into the theater to start watching your movie, they had menus in there where you could order full dinners like steaks, burgers, chicken, etc. instead of boring old popcorn if you so chose to. (Although you could still get your popcorn and candy at the traditional movie theater snack bar up front). As andsome96 commented, "I like the curvy-looking font Cobb used for the signs at their older theaters. Regal's Sawgrass 23 (Originally a Cobb 18-plex built in 1991 that was credited for being one of the first mega-plexes in the US) still has a sign like this along the side of it. I'm impressed that Regal kept it intact seeing as how they gave the theater a major renovation and expansion in 1999." 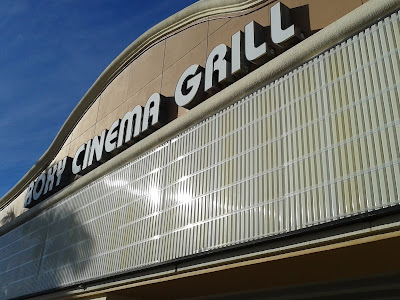 Tonight's feature presentation: Attack of the Blank Board! Anyway, here's a different angle of the marquee and sign. 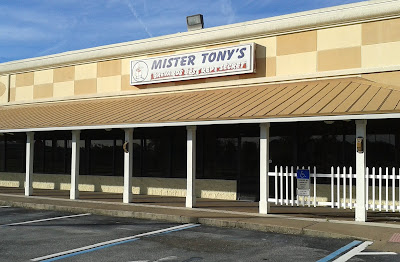 In addition to the main movie theater portion to the building, there were two spaces in the front left and right corners of the building for small restaurants (both of which are now empty). On the left side was Mister Tony's Pizzeria, pictured here. 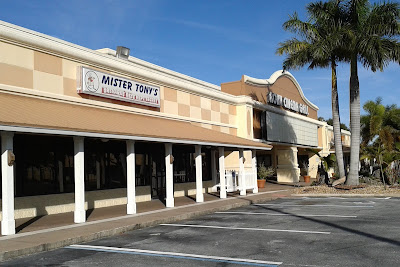 Mr. Tony's in the forefront still, however the remainder of the theater's facade can be seen in the background. 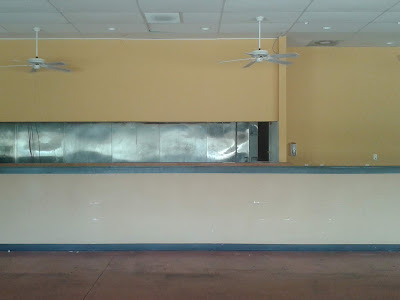 Peeking through the glass, here is the interior of Mister Tony's. This photo is looking into the dining area and part of the kitchen. 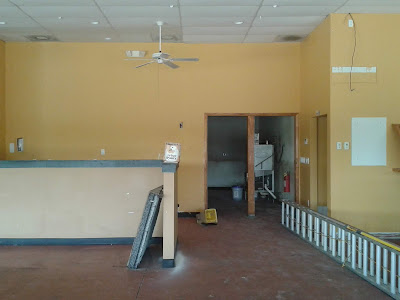 The side of Mr. Tony's dining room, looking into the kitchen doors. They even left a bag of frying batter behind! 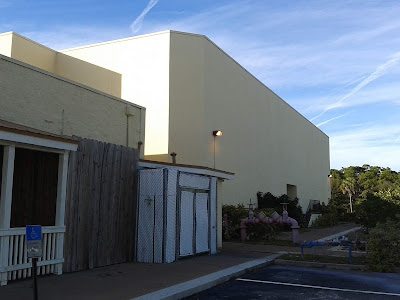 Moving away from Mr, Tony's, here's a look down the right side of the building. As andsome96 commented, "In addition to the murals, I also liked these angled corners that were another distinctive feature of Cobb's builds." 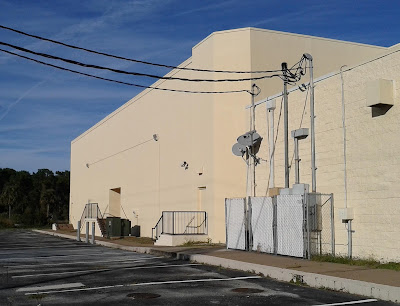 Jumping around to the opposite side, here's a look down the left side of the abandoned Roxy cinema building. As andsome96 restates, "It just wouldn't be a Cobb theater without wedged corners." 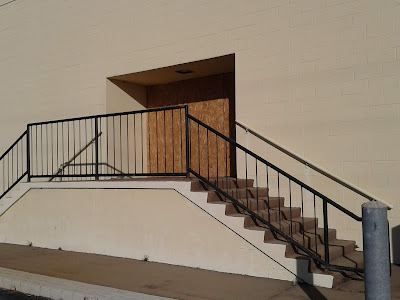 Boarded up doors visible here on the left side of the building, presumably covering an emergency exit. Cape Kennedy Retail provides us with an update on the condition of this building, as I took these photos quite a while ago: "This location has badly deteriorated since 2015, there's minor evidence of homeless activity, some weird massive spiderwebs have popped up, all windows are now boarded, much more trash, graffiti has begun to appear (this spot specifically is a hot spot for it)" 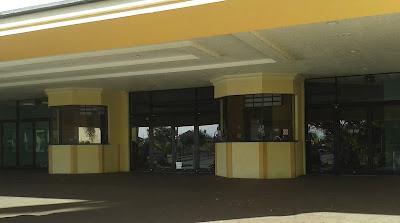 The main entrance into the theater can be seen here, with the ticket booths located between the doors. 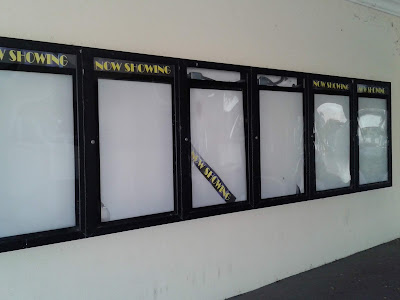 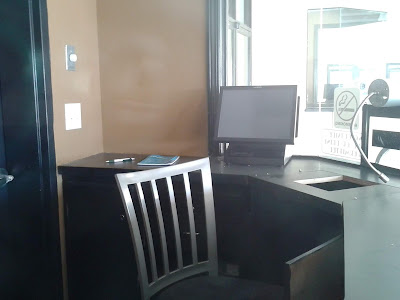 Here's a quick peek inside one of the ticket booths. 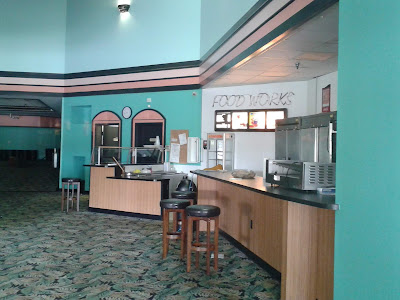 Now for a few photos inside the theater's lobby, which very much looks like something out of the 90's! (I'll let you, the readers, interpret for yourselves if that is a good thing or bad thing - however, I think you all probably know how I interpret this!). Part of the concession stand, aka the 'Food Works', can be seen here, complete with all the equipment still. Also, as PlazaACME noted, "Notice how the décor lighting and signage are still all lit up. Wonder who's paying the energy bill..." 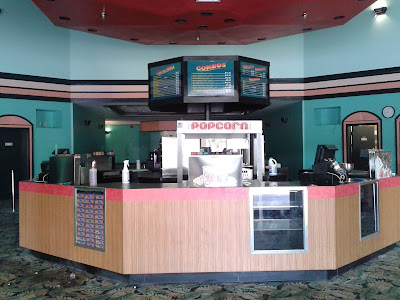 The main concessions island, and also where you could order 'From the Grill'. This takes up most of the lobby space when you would first walk inside. Even though I took this photo through the glass of the front doors, one flickr commentor thought I had gone inside the building for this photo. I guess that's how clear this photo must have come out! 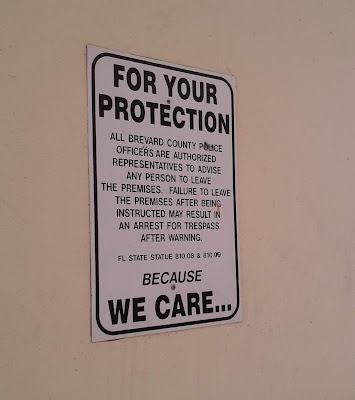 Thankfully I didn't get any surprise visits from the police while poking around here. This sign was on one of the columns on the front of the building, facing the ticket booths. As PlazaACME advised, "I don't think there would be a problem even if you did meet a police officer, because it sounds like they give you a chance to get off the property before arresting you. Now with signs like that up, how do they expect to find someone to lease this place?"  However, I don't believe this sign was put up to scare away theater patrons or harmless online retail bloggers. I believe this sign may have been put up to keep the local homeless people from hanging around here at night (as there's a large homeless camp in the woods not far from here), as this isn't the rowdy part of town. 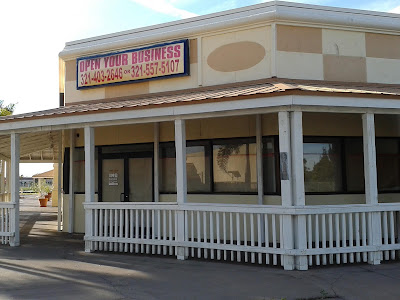 As mentioned previously, the main building had two spaces for small restaurants - one on the front left corner and another on the front right corner. Pictured here is the empty restaurant space on the right corner of the building, most recently one of the many locations of local restaurant Wings N Things. Wings N Things has moved about 5 times or so since first opening in the area in 1997 (with this location, I believe, being their third location). After Wings N Things closed here, they moved to a space in the Winn-Dixie plaza at Babcock St. and Port Malabar Blvd., about a mile south of here. A short time later, Wings N Things moved to Las Palmas Plaza on the opposite side of Babcock Street from the Roxy cinema, where they still operate today. 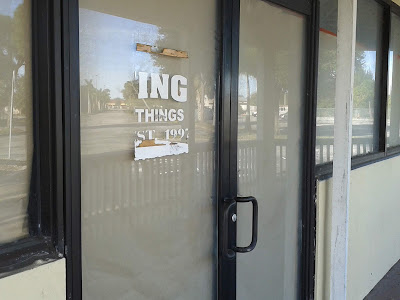 Ing Things...It looks like there was something covering that lettering when they came to scrape the old logo off, but the person who did it never bothered to scrape under it. 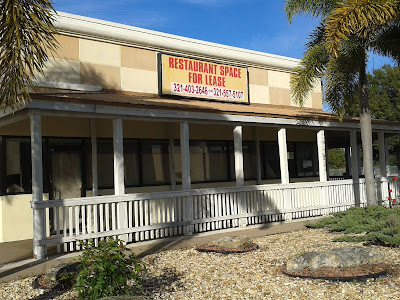 Stepping out further to see the front of the former Wings N Things space. 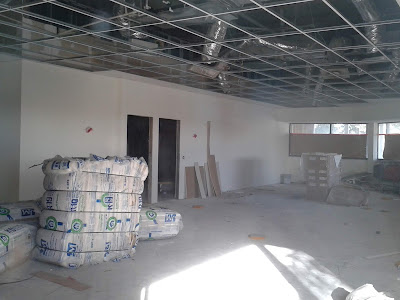 Looking inside the former Wings N Things space, we see that this place was pretty much gutted (unlike the former Mister Tony's space we saw earlier, on the opposite side of the building). 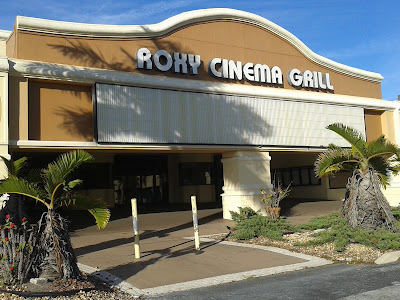 To wrap up our tour of the former Roxy Cinema Grill, here's one last look at the main entrance into the theater and the marquee. After sitting empty for 5 1/2 years now, I don't know whatever will become of this place. Like I said before, with the new Carmike/AMC just up the road, finding a new theater tenant to open in here will be hard, especially if they have to buy all new projection equipment to get this place up and running again too. I can actually see this building becoming home to a church eventually, as a few old movie theaters around Orlando had the same fate. With all the stadium seating, old movie theaters actually make for good churches. However, it doesn't seem like anyone is jumping on this place right now, so we'll just have to wait and see what happens...

However, before we leave this shopping center behind, there's one last thing we need to take a quick look at here: 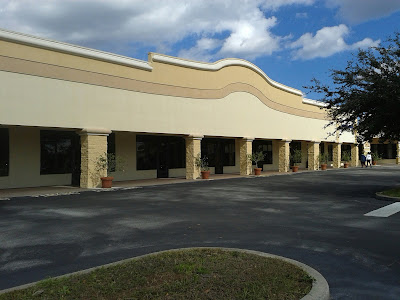 This Food Lion opened in 1991 during the first wave of Food Lion's big push to enter the Florida market. This Food Lion store converted to the Kash n' Karry name in 1999 with many of the other Food Lion stores in Eastern, Western, and Central Florida. Delhaize pulled Kash n' Karry out of Eastern and Central Florida in 2004, at which point this store closed. Later in 2004, River Breeze Antique Mall took over this space. River Breeze didn't last very long, and this building continued to sit empty. In the early 2010's the former Food Lion space was subdivided into multiple small storefronts. I think our local cable company, Spectrum, has an office in one of the units in the old Food Lion, as does a daycare center, but I think most of the space is still empty today,

While the building has since been subdivided, the facade is mostly original to Food Lion and Kash n' Karry. Beneath the raised part of the facade with the slight curve would have been Food Lion's entry vestibule, with this store being very similar to this one when it was a supermarket.

And that's all I have for you guys today! So until the next post,