Food Lion originally opened here in 1989. This store converted to the Kash n' Karry name in 1999 with most of the other Eastern and Central Florida Food Lions locations. Kash n' Karry closed this store in 2004 when they pulled out of Eastern and Central Florida. This building would then become home to the Wildwood Antique Mall on December 10, 2012. Wildwood remained in this location until November 2018, at which point they relocated into a portion of the old Kmart building across the street. As of January 2019, this building sits vacant.

Other than some slight exterior modifications when the Kash n' Karry conversion occurred (which included adding some of the decorative stucco work and that wavy piece above the vestibule), this building still very much looks like an old Food Lion. There are actually a lot of very well preserved former Food Lions floating around Florida, which is good news for fans of repurposed supermarkets! Since the antique mall has been the only tenant in this building since Kash n' Karry closed up shop in 2004, very little was done to the inside in addition to what little was done to the outside. For that reason, this place was a fun pit stop from time to time, moreso to imagine what it looked like as a Food Lion than to look at the antiques themselves!

The photos you'll be seeing in this post are a combination of photos taken in 2014 and 2017. The 2014 photos were actually one of the very first photosets I ever uploaded to flickr. While my photo taking has come a long way since early 2014, the photos I took of this place turned out rather well for a store that was part of one of my very first retail outings. 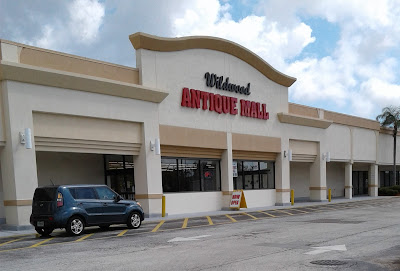 In this 2017 photo, you can see the banner sign from the previous two photos has been replaced by a permanent sign. If you were to come here today, you'd find no sign of this sign or this antique mall itself! 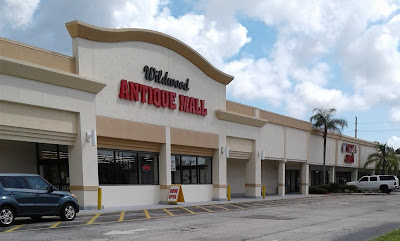 Over the years, this shopping center has become home to mostly thrift stores and other types of resale shops, although I believe at least one restaurant and a local gym still have locations on this plaza. To the right of the antique mall we can see another one of the plaza's many thrift store-type places, Trader Jake's (Trader Joe's much less successful brother :) ). Trader Jake's has also either closed or relocated since this photo was taken. 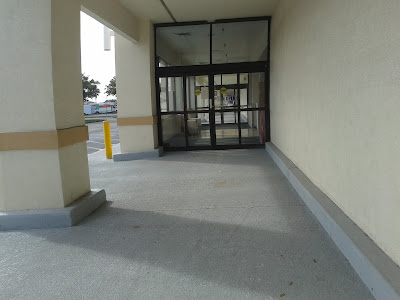 Stepping onto the walkway, here's a look toward the right side entry vestibule of the former Food Lion. Please pardon the slight curve this photo has - that was a product of my novice photo taking skills! 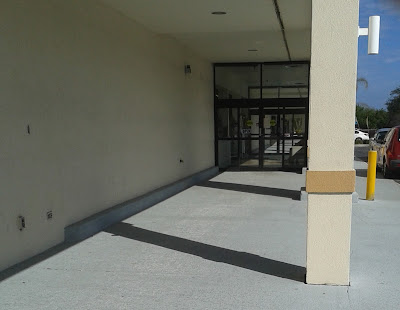 The left side entry vestibule can be seen here. Let's head through those doors and see what's going on inside... 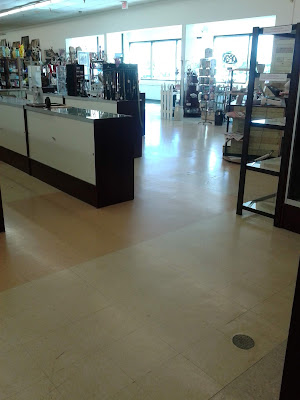 In this photo we can see the front end of the former Food Lion, looking back toward the vestibule. The cash registers would have been located in this area, with the service desk just out of frame to my right. Wildwood used this front portion of the building as a Jewelry Department. 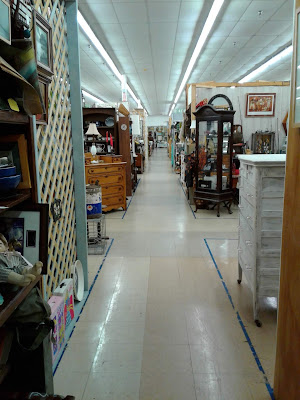 Going further into the salesfloor, we find where all the vendor booths are located. This space would have been home to the grocery aisles, as seen from the approximate location of the former frozen foods department. Also to note, all of the flooring you see is original to the Food Lion days, as well as the lighting. 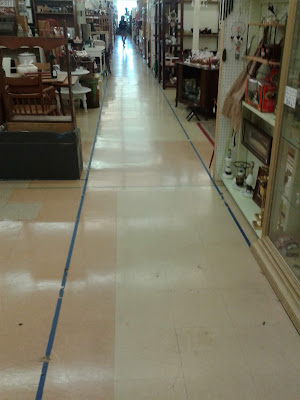 This photo showcases more of the original flooring, but in more detail. The pale orange and off-white tiles are a staple of these old late 80's/early 90's Food Lion stores. 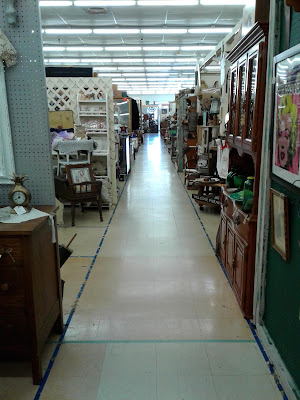 Here's another look toward the front of the store from one of the aisles of vendor booths. This view is similar to looking down a grocery aisle, but with more random junk in the place of the cereal and bread. 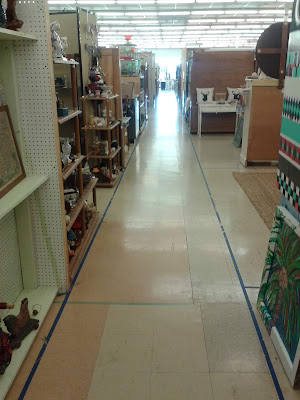 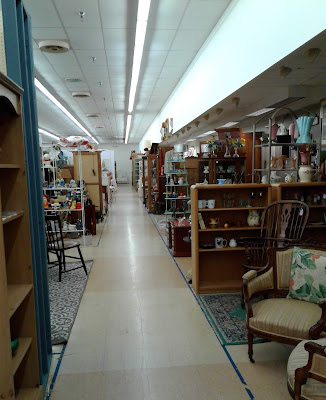 Here we’re looking across this store’s back wall, where the meat and seafood departments once were. Under that lower ceiling to my right would have been the meat cases. Some old spotlights, while now unused, still line the back wall. I also wouldn’t be surprised if behind all of the knickknacks the old tile backsplashes still remain. 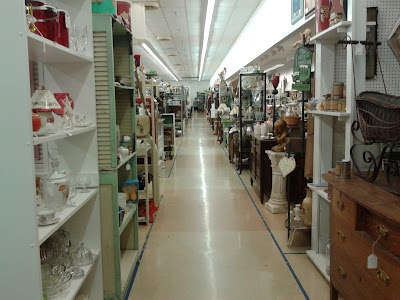 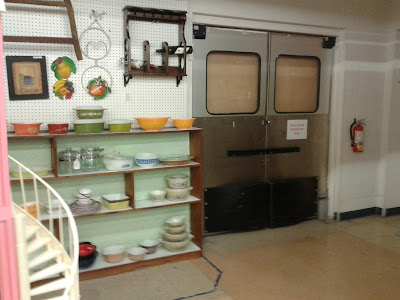 The original backroom doors blocked any further access into the back of the store during my 2014 visit. However, business must have been booming for the antique mall, as during my 2017 visit they had expanded their vendor space into the old backroom. Let's take a quick peek at that: 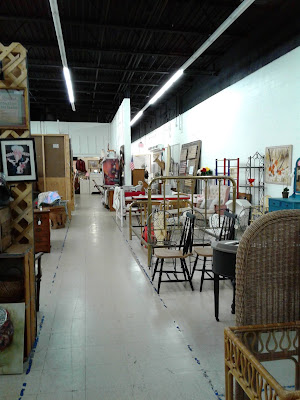 So here is what Food Lion's backroom would have looked like. This particular photo was taken near the right side of the store, looking down the back wall. 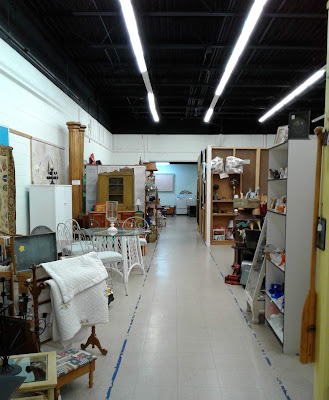 I’m pretty sure the exposed black painted ceilings were original to the Food Lion days, although I’m not too sure about the floor tiles. Typically most backrooms have exposed concrete floors, so I’m thinking the antique mall may have installed the tiles. That white wall in front of me was part of a small room that jutted out into the backroom space, which I believe was once home to a walk in freezer. 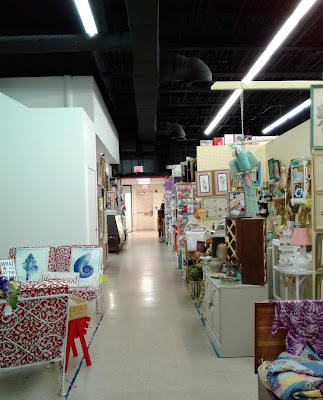 Looking into the left side of Food Lion’s old backroom here, with the side wall visible in the distance. There’s also another entrance to the main sales floor just ahead, so we'll go through that door to emerge back onto the salesfloor... 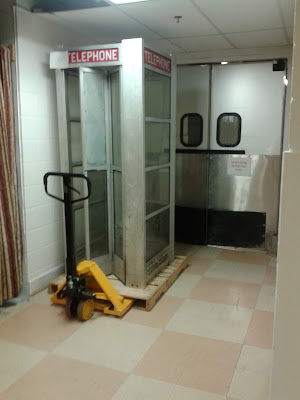 Returning to the sales floor, what do we find but a phone booth. Telephone anyone? 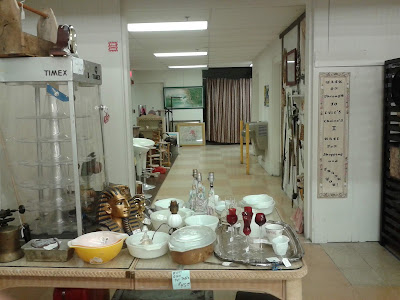 Back on the main salesfloor, here's is a look down the corridor that would take you to the set of stockroom doors we saw in the previous photo. The restrooms were also located down this hallway, which was located in the store's back left corner. 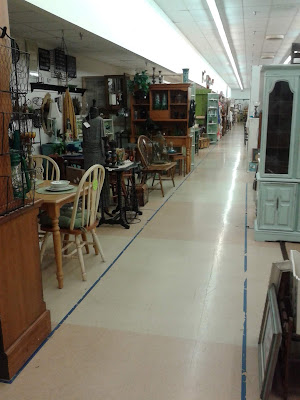 Here's a shot across the back wall of the salesfloor from the left side of the store, where more meat coolers would have been located. 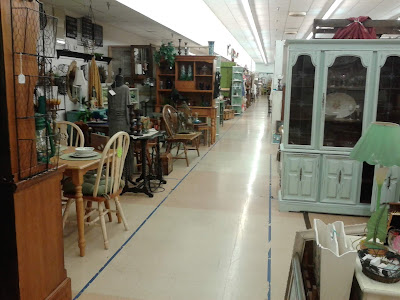 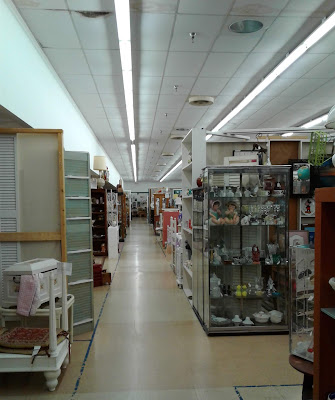 More from the back aisle. As vintagefans commented, "Hmm, those big round lights, look familiar to that Food Lion turned Publix, I guess they were original. And those air vents are the ones I remember from Food Lion. They were over the frozen food aisles, I think Albertsons had similar ones over their frozen." When I saw these lights and vents here, I immediately thought back to the Food Lion turned Publix. These are definitely a very old Food Lion trait. I'm not entirely sure what purpose those drum lights would have served, as they seem pretty redundant with the fluorescent strips. 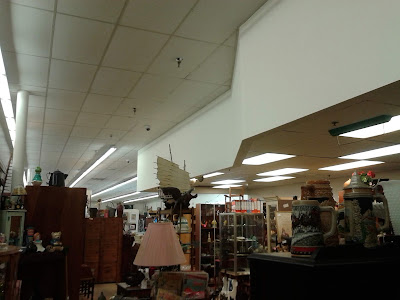 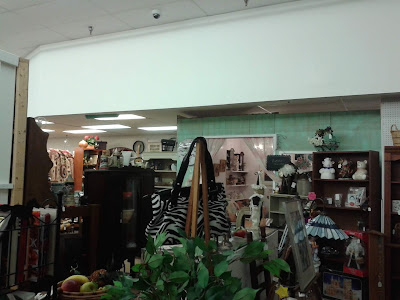 Here's a view looking straight into the former Bakery prep area (if only there wasn't so much stuff in the way). 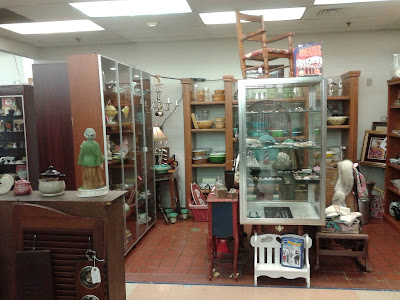 Stepping under the drop ceiling, this photo showcases the deli prep area. The red square tiles signify what was originally "behind the counter" space. 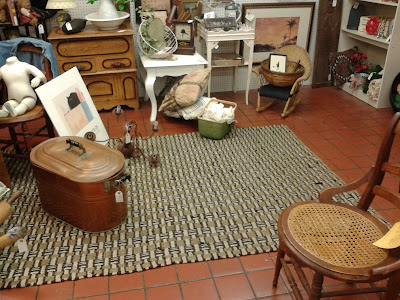 Here's a clearer look at the prep-area tiles. 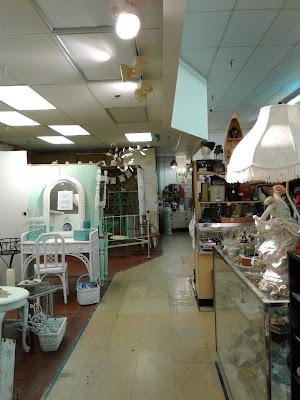 One final overview of the former deli/bakery department before we conclude this post. Like we saw on the back wall, some old spotlights for the deli cases remain on the lower ceiling.

This final overview of the exterior will conclude my coverage of the old Melbourne Food Lion store. I believe fellow My Florida Retail blogger Cape Kennedy Retail has some coverage of this former Food Lion store, although I'm not sure if he'll be posting that coverage on here in the future or will do something else with it. Regardless, we'll be keeping an eye on this place to see what (if anything) eventually moves in here. Depending on what moves in here, we could very well be seeing this store again on My Florida Retail!