In the mid to late 1980s, as Food Lion ran about Florida building stores wherever they'd fit in a bid to secure a market share, they penned tentative plans for a store on what was then a largely undeveloped space along Route 192. But, due to a longer story that is neither here nor there and best destined for another time, those plans were dropped like a hot stone and in 1992 ground was broken on what is now Target #689 and our subject for today, a standard Circuit City attached on the side. Sort of seems like Target was pre-emptively shooting their electronics department in the foot, but I'm not a retail planner. Fortunately, Target didn't have to worry for long, as this smaller Circuit City closed in 2006, likely due to a combination of Circuit City's creeping financial woes and the presence of a much larger store at the Melbourne Square Mall within almost literal spitting distance.

After a little while, as time passed and the the rest of Circuit City folded into history, this store got a coat of paint and a new name. While it never operated as a Spirit Halloween or similar outfit, it was scooped up by one of the industry's other most prolific fly-by-night tenant occupiers, the furniture/appliance store.

This undated photo pinched from the Yelp page shows the shiny lick of yellow paint the store got as it operated under the new name of "Topline Appliance Superstore". I tend to compress words on occasion, but something about Topline as one word annoys me greatly. Anyways! Due to the use of red on Topline's logo, I'm unsure if the red railings were Topline's doing or just extremely lucky coincidence. Basically nothing has been done to the exterior here, with the store still clearly having the distinctive "wall plug" storefront. With the scaring of the once immaculately preserved Merritt Island Circuit City in it's conversion to medical related offices, it leaves this small little store as the most intact piece of Circuit City design in the county. First to die but also somehow the longest to survive. 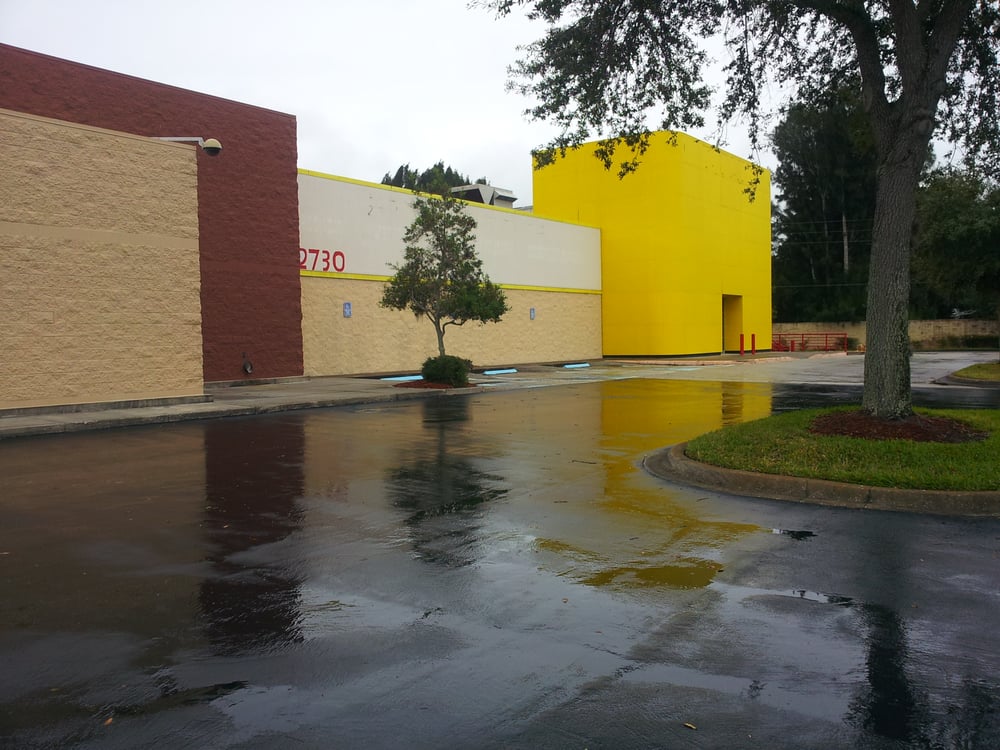 Now, as with all of these stores, Topline was not long for this world. At least not in this spot. By 2011 at the latest, they had vacated this spot for another down the road in a much more nondescript storefront, replacing a Sofas Direct. After Topline left, the store sat vacant, for the first few years, as yellow as Topline had left it, shown in a 2013 dated photo above from a Yelp user. Then... 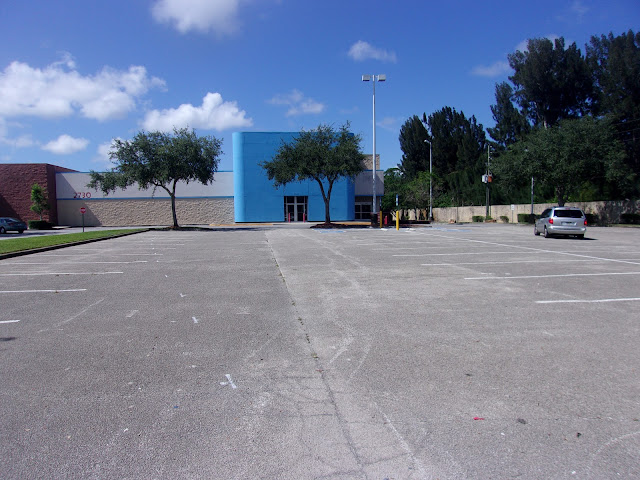 It was blue. I have no clue why, failed tenant? Just thought it looked nicer? Who knows. But it does mean that throughout this building's lifetime it's bounced between all three primary colors, so maybe the contractors just wanted to go for completion. The blue paint is what the building currently wears, and is what it wore when I photographed it on an unremarkable day in the beginnings of August last year. 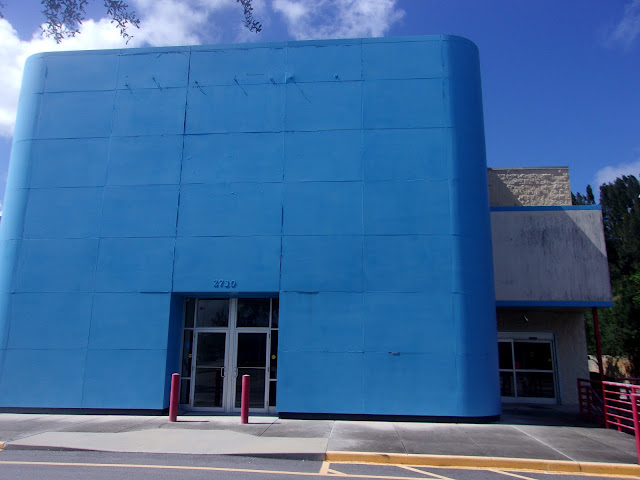 Closing in on the storefront, we can see some red bollards that like the railings just out of frame to the right, confuse me as to their paint's true heritage. Barely visible towards the top of the facade is the mounting hardware from Topline's signage, blending into the blue paint behind it. Far more visible is the seams between the many panels that make up the storefront. Some of them are pretty bad, especially up towards the top. Funnily enough, when they painted the facade, they even painted straight over the address numbers. 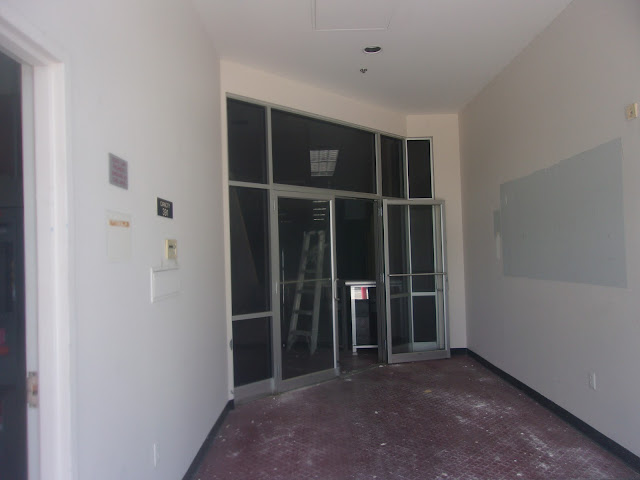 Quickly gluing our face to the front doors, we get our only meager look at the interior of this store. Well, the vestibule, at least. Not much is here, another pair of silver doors, a painted out square on the wall that may have been a bulletin board, and an anomalous ladder left behind long ago. No clue what it's doing there, as there's no work going on to install a new tenant, certainly not at the time I was photographing at least. 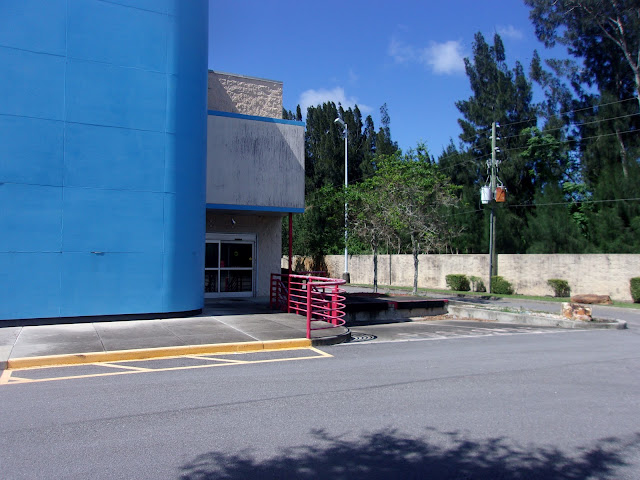 Pulling away from the glass and turning slightly to the right, we look upon a second set of doors and a customer loading dock. I was confused as to what a customer would need this for, until I remembered how heavy large CRT and projection TVs were, so this makes sense to have. I imagine in it's second life as an appliance store, this came in quite useful. This whole area is in rougher shape, the whole white portion above the doors is very worn compared to the white on the rest of the building, and the railings were very worn as well. 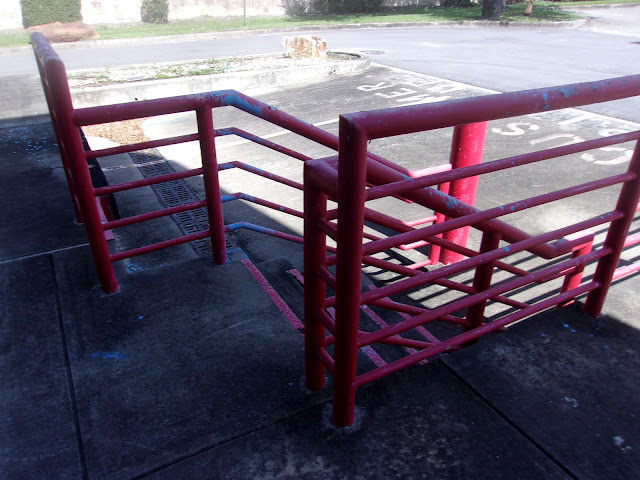 A closer up photo of the very weathered railings. The amount of wear on these makes me think they might be Circuit City Red, but I really have no evidence that they aren't just Topline Red. 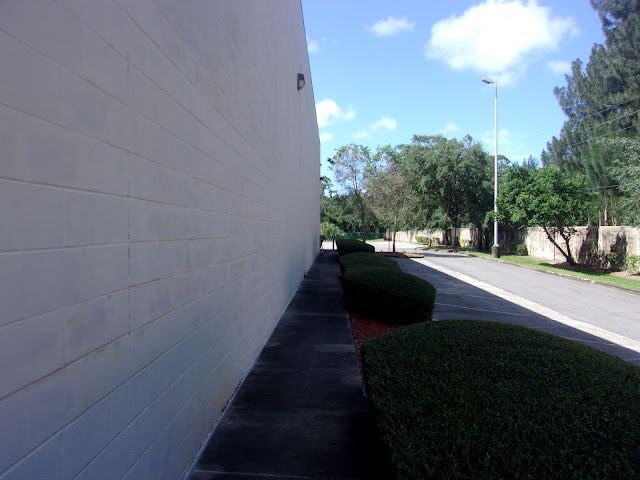 Turning down the side of the building there's not much to speak of, except patchy paint and some very well maintained hedges. However the sidewalk here is in desperate need of a powerwash. 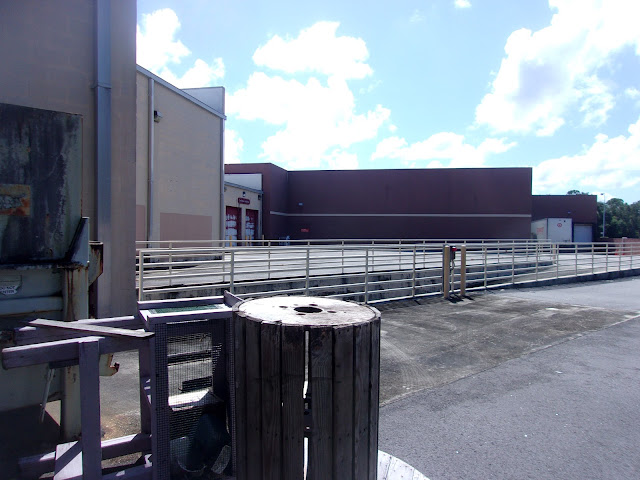 Rounding the corner we can see Circuit City's loading dock and stereo installation bays with Target beyond it, our view slightly obstructed by some wooden..... stuff, and the trash compactor, which as far as I remember still had papers dating to the early 2010s sticking out of it. I made my own contribution with the packaging of a fresh set of batteries when my camera batteries gave out shortly after this shot. 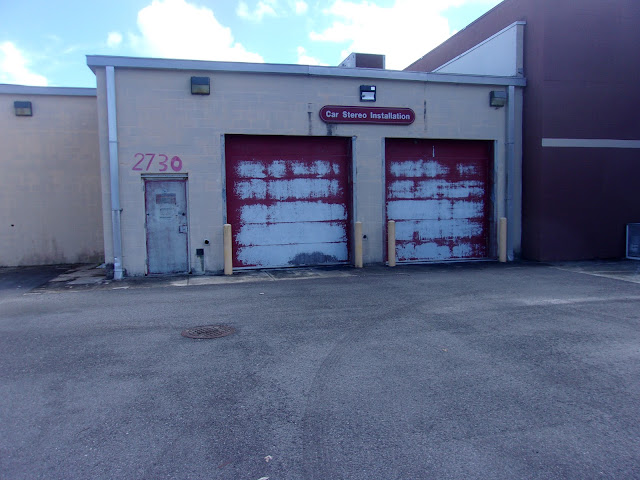 Ignoring the janky, hand-painted 2730 above the dull gray door, we find one of the most prominent Circuit City remnants in the former Car Stereo Installation bays. The garage doors are painted in extremely faded CC Red, and the little sign still sits above it all in rather amazing shape. Whenever this store moves on to it's next life, whether that be a new tenant or demolition, I hope I can somehow acquire this guy. 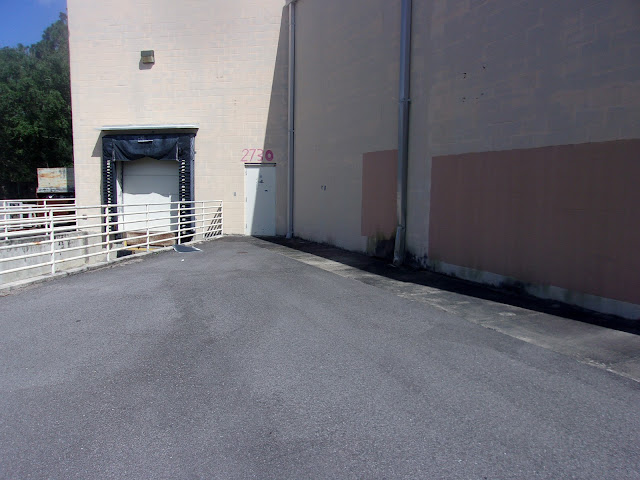 Turning back around, we stare at some mystery blocks that have been painted out. What was here, I don't know. Now it's just grime and shadows, and another janky "2730" address number above the door. Seriously. Buy a stencil, they probably sell them next door. We can also see part of the store's singular loading bay, and the trash compactor off in the background. 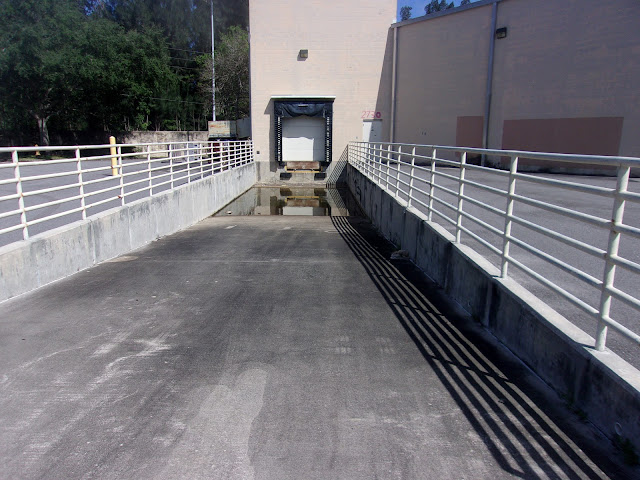 To end off this post, we stare straight down the loading bay to see not much more than dirt, some impressively still white railings, and the pool of stagnant water that had accumulated towards the bottom. Anyways, I'm hoping to put these out more regularly, now that the rushed mess of the holidays is over. I hope everybody else's holidays have gone smoothly as everyone grumbling-ly returns to work and school to ring in the new business year.

Posted by Cape Kennedy Retail at 12:35 AM