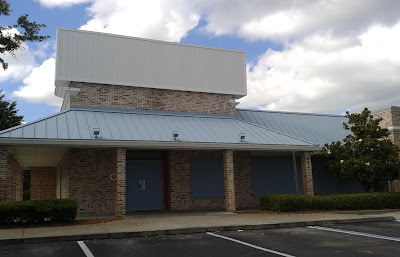 Bob Evans opened here in 2002 as an outparcel to the Palm Bay Road Walmart Supercenter. This was one of the 27 Bob Evans Restaurants that closed without warning in late April 2016. After sitting vacant for a short period, this building was demolished in 2018 and replaced with a new Wawa gas station.

Not So Farm Fresh Anymore... Today on My Florida Retail we'll take quick look around the abandoned West Melbourne Bob Evans. Since everything on the other side of the road lies in the city of Palm Bay, this area around the Walmart is also referred to locally as being in Palm Bay, although technically it's right over the border in West Melbourne. As confusing as that is, that's a discussion for another time. Anyway, as you can see looking at the front of the old Bob Evans building, the place is all boarded up, and the decorative gable over the front doors has been covered. I'm assuming that gable is trademarked by Bob Evans, as every time one of their restaurants closes that gable gets covered over or removed completely. As some of the others commented on flickr, it's apparently much more common for the gable to be removed than covered like this: "Interesting that they covered the gable. Most I've seen will have the gable removed." (Ryan Busman_49), "Exton just had their gable removed. I think it actually looks better that way." (PlazaACME), "Yup, I'm with everyone else, I've only ever seen it removed. Odd!" (Retail Retell).

The closing of this Bob Evans leaves only one other remaining location in Brevard County, about 15 miles to the north in Viera. 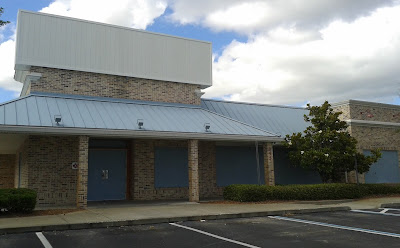 A wider view of the front of the restaurant can be seen here. 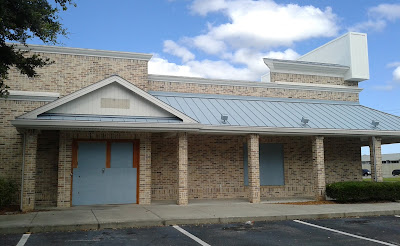 The left side of the building. I'm guessing that door you see in this picture was an emergency exit, but I'm not sure. It could have been a side entrance too. Here's the insight you guys on flickr provided: "Could've been the carryout entrance here." (Ryan busman_49), "The Horn Lake Bob Evans-turned-Hardee's has entrances on three of the four sides! I'm not sure what their purposes were during the Bob Evans days." (Retail Retell) 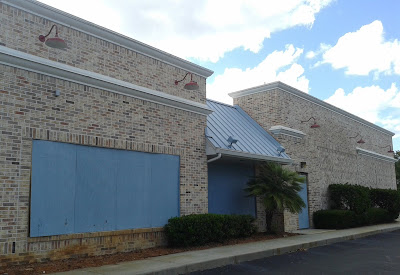 This photo of the right side of the Bob Evans building will wrap up this short post. In case anyone is interested, here's a picture of the Wawa that is now located at this site. Wawa held its grand opening in November 2018.

Thinking now about my unposted Horn Lake Bob Evans Holiday Hardee's pics that I'll probably never get around to (although you can see some some photos of that strange transformation here), until the next post,