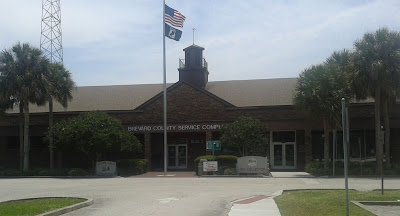 This is a rare sight in Florida! Opened in 1968, this was a later-built A&P centennial design store. This A&P closed sometime during the 1970's if I had to take a guess, as A&P closed all of their smaller namesake stores Florida around then (before reappearing again in Florida in the 1980's under the Family Mart name). This building was converted into the Brevard County Service Complex in the late 1980's, which houses a variety of county offices such as the DMV, tax collector, and Sheriff's office.

During much of the period when A&P was building their centennial stores, they favored building stores that looked like this in Florida (as well as California). Not too many Centennial Stores were built in Florida, which is why this store is such a treat. Even the weather vane is still there, which is rare for a repurposed Centennial Store anywhere! This is certainly the best preserved centennial A&P building I know of in Florida (at least out of the three that I know exist). One of those three is this heavily modified one in Orlando that is now a Winn-Dixie, and the other is also heavily modified, located in downtown Kissimmee.

Here's one final look at the former Melbourne A&P store, taken from a bit further back to showcase more of the building. A rather crummy image yes, but it gets the point across!