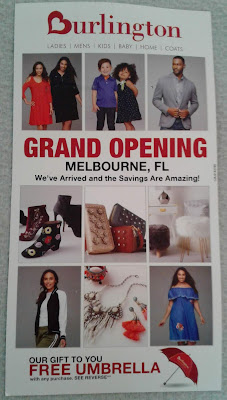 Burlington (Coat Factory) opened their first Brevard County location in the former Melbourne Sports Authority store on October 13, 2017. Sports Authority originally opened at this location in 1995 and closed in May 2016, prior to the liquidation of the rest of the chain.

After spending nearly a year vacant, it was announced in June 2017 that Burlington Coat Factory (yes, I’m still not well-adjusted to the Coat Factory-less version of the name yet!) would be opening a new location in the former Melbourne Sports Authority location. This is a very similar situation to what Retail Retell documented in 2017 as well, however this Burlington store was not a relocation – it’s just taken them a while to get to my area! This store is pretty similar to the new Southaven, MS Burlington store you can see at that prior link, but there are a few differences between the two we’ll see along the way as we go through the photos. To start off this post, above is a flyer that Burlington sent out to most of Southern Brevard County prior to the grand opening. In addition to this, Burlington was playing plenty of Grand Opening announcements on the local radio stations too for their first few weeks in operation. I drive by this place often enough, and I have yet to see the parking lot not packed, so Brevard has definitely been showing a love for Burlington! In the first few weeks this place was open, the overflow parking lot for the restaurant next door was also at capacity with eager Burlington shoppers! 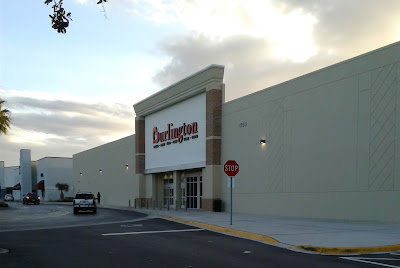 Sporting a new coat! While this store opened in October 2017, it took me until early December 2017 to venture over to this place for photos due to the crowds. This place was still pretty busy this particular weekday evening, but calm enough for decent photo taking. The only major modifications Burlington made to the exterior involved modernization of the entryway to make it more Burlington-like. The entryway was also reconfigured with new windows and doors, as well as the creation of a vestibule that Sports Authority did not have. 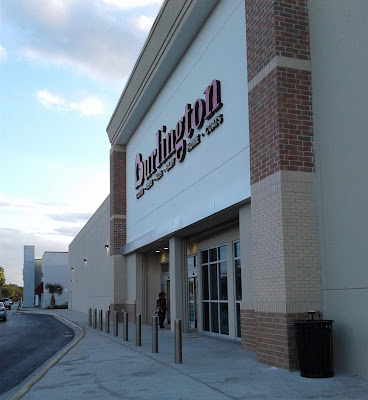 A close-up of Burlington’s modernized entryway. As you can see by the signage, Burlington hasn’t completely kicked coats to the curb just yet – they still make sixth billing on the department names placed under the main sign! 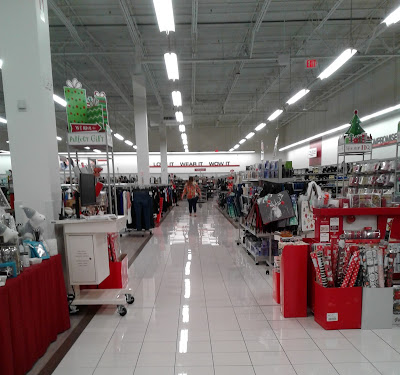 Walking in and immediately turning to the right, this is the sight that greets you. To use Retail Retell’s description, these new Burlington stores are pretty shiny! Burlington did a fair amount of remodeling to the interior of the old Sports Authority store, as this place feels nothing like Sports Authority inside anymore. This photo was taken looking into this same general area during Sports Authority’s liquidation sale – big difference between then and now! As far as Burlington’s layout is concerned, the aisles to my right contain jewelry, watches, handbags and accessories, and perfumes, while women’s clothing is located to my left. Women’s shoes are off in the distance under the “Love It. Wear It. Wow It.” sign. You can also make out part of the fitting rooms signage in the front right corner of the building too. 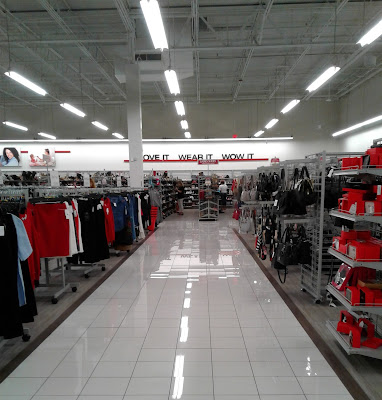 Moving further down that same aisle, here’s another perspective looking toward the right side wall. As YonWooRetail2 said, "This former Sports Authority made for a nice Burlington!" It sure did! This Burlington is a very nice place to shop at. 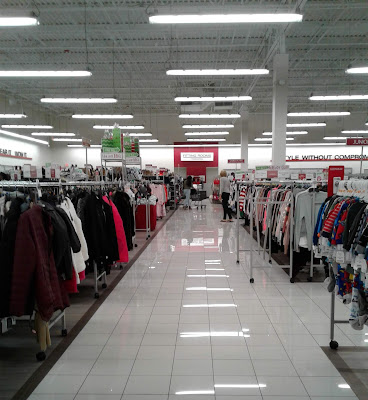 This photo serves as an overview of the right side of the new Burlington store. Women’s coats, lingerie, and shoes are to my left from this perspective, with Women’s clothing to my right. Behind me to my left was a small section of children’s shoes and toys and behind me to the right was the beginning of the Baby Depot section. Also, at the very end of this aisle are the store’s only set of fitting rooms, which occupy the front right corner of the building. Here’s a reversed overview of this part of the building from the Sports Authority days, taken from the front instead of the back like this photo. 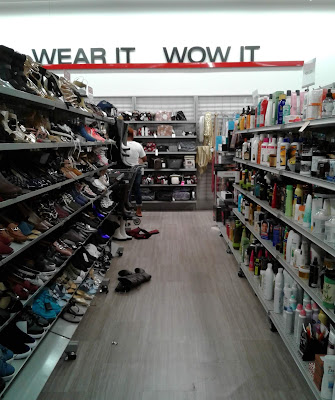 Between the fitting rooms and the beginning of the Women’s shoe department was an aisle or two of shampoos and beauty products, part of which can be seen here. You can also see here that the fine folk of Melbourne have already broken this new store in with a few pairs of shoes already tossed on the ground. However, this is nothing compared to Sports Authority’s shoe department going into their final days… 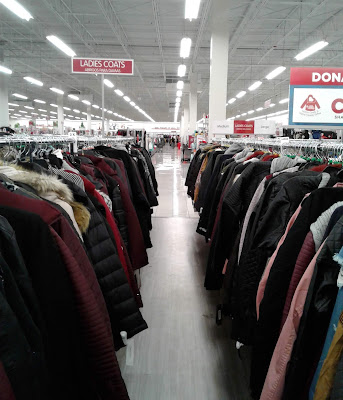 Here is some photographic evidence that the new “Burlington” still sells coats! (As YonWooRetail2 said, "With this shot this really does look like a "Coat Factory".) The Women’s coat department is located in the back right corner of the store, between lingerie and the children’s shoe department. We can also see across the back of the store from here, but I have a better photo looking down the back aisle coming up shortly. 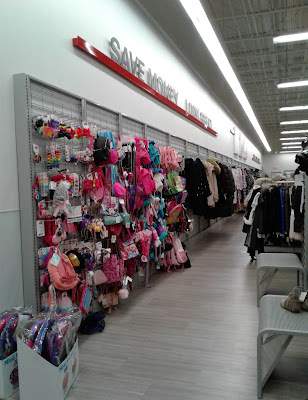 Most of my attempts to photograph the wall signage in this place got washed out by the lights lining the perimeter of the sales floor, like this one. Amongst all of the glare is the sign that reads “Save Money Look Great”, which is hung above the Children’s shoe department. 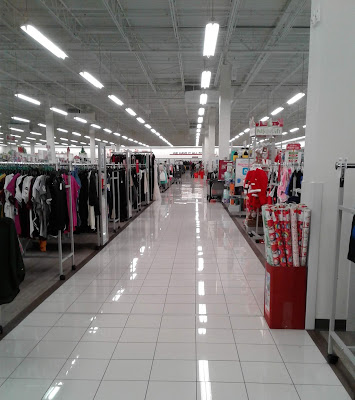 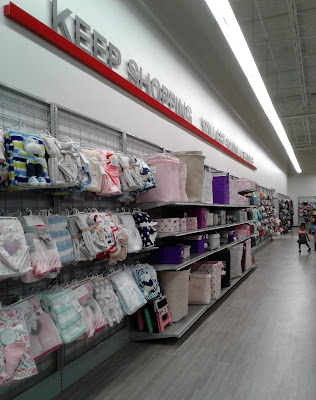 Anyway, turning our attention to the back wall, here’s another glared attempt at capturing one of the wall signs - this one being the “Keep Shopping – You Are Saving A Bundle!” sign. This sign hangs over the back of the Baby Depot department, with the back right corner of the store visible in the background. 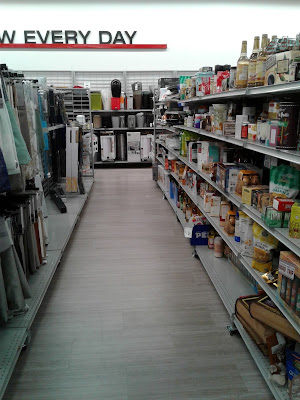 Moving further to the left along the back wall we find the housewares department, as well as some other random assortments of merchandise Burlington carries like As Seen on TV, linens, and the small assortment of food (pictured here). 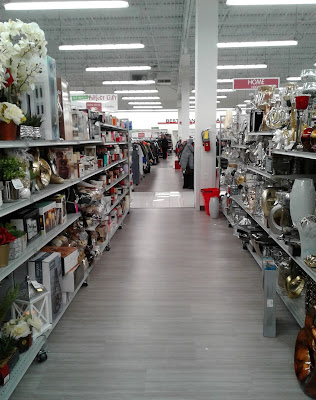 Another one of the aisles in the housewares department, this one containing candles and decorative dust collectors knickknacks. 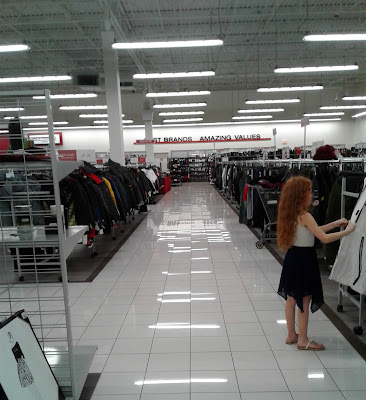 Moving along now to the left side of the store, where the men’s clothing departments are located. This is a look down the main left side aisle, looking from the back of the store toward the front. Here’s a similar view of this area from the Sports Authority days. 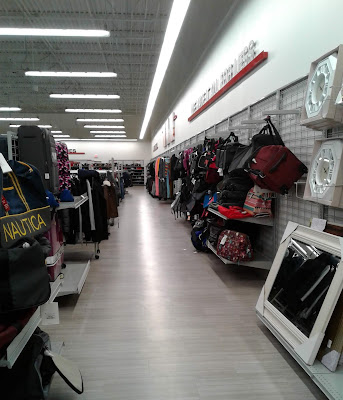 Looking down the building’s left side wall now, what we see here is the men’s clothing department as viewed from the luggage department. Behind me were also two aisles of pet supplies, mostly limited pet toys and beds. 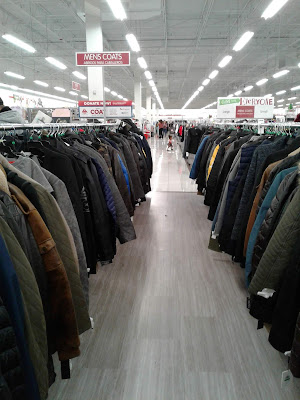 Over on the left side of the store we find more coats, this time the mens' coats. Mens’ coats are located on the exact opposite side of the store as the ladies’ coats, which we saw earlier in this post. With the chilly weather we’re supposed to be getting around here tonight (supposedly the coldest weather so far this winter for us), I bet these coats are in high demand right now! 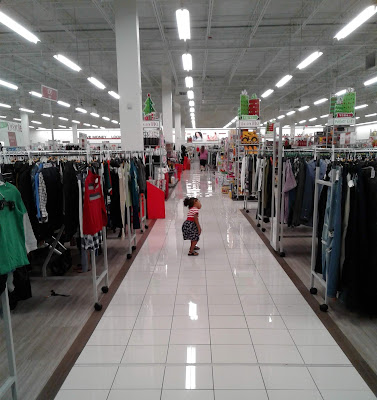 Here’s a look across the store from one of the center aisles, this one dividing boy’s clothing (to my left) from young men’s clothing (to my right). In the distance was a special section Burlington set up with toys and gifts sets to prepare for the Christmas season. 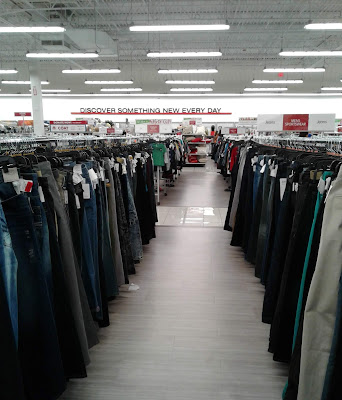 Looking down one of the center aisles of clothing racks here. This photo was taken in the young men’s department toward the back of the store. 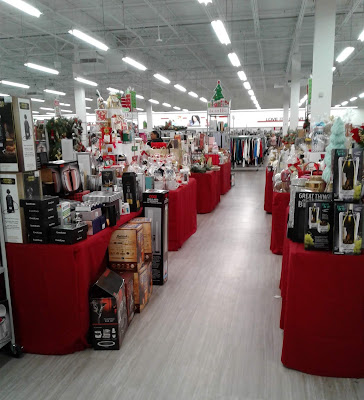 This is a close-up of the special Christmas gift section Burlington set up for the holidays, located in the center of the store near the entrance. I’m assuming this part of the store will serve as a seasonal department of sorts for Burlington, although I haven’t been back since Christmas to see what’s being put here now. 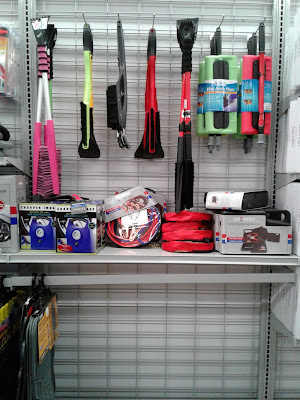 In addition to all of the clothing, housewares, gifts, and coats, Burlington also had a small automotive department in the front near the checkouts. I thought it was funny seeing all of the ice scrapers for sale here (who needs one of these in Florida!), however the weather we’re expected to get tonight might warrant buying one of these things! Some areas north of Orlando are supposed to get near or below freezing tonight! 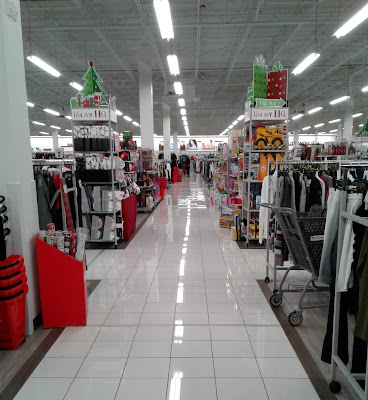 Another center aisle shot, this time taken a bit closer to the special Christmas gift section. Racks of Women’s clothing occupy the space beyond that. As PlazaACME commented here, "I was just talking to my cousin who lives in the Melbourne area, and she mentioned that a Burlington had recently opened there. I'm pretty sure that's this one. Small world!" 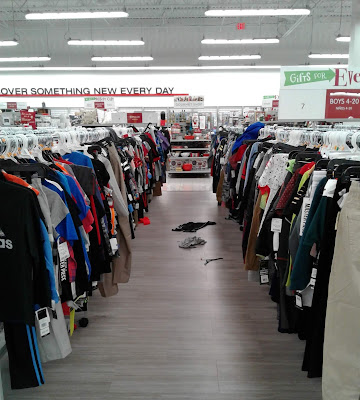 Another random clothing aisle view, this time from the boys clothing department. As you can see here, the fine folk of Melbourne have yet again left their mark on this store… 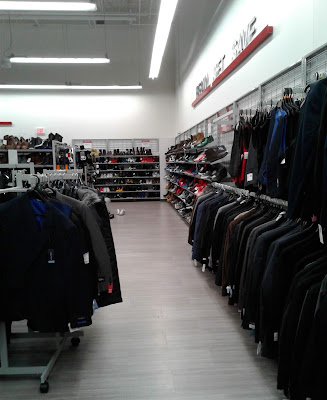 Moving into the front left corner (where Sports Authority’s fitness department was located). Burlington keeps Men’s suit jackets and shoes in this corner. 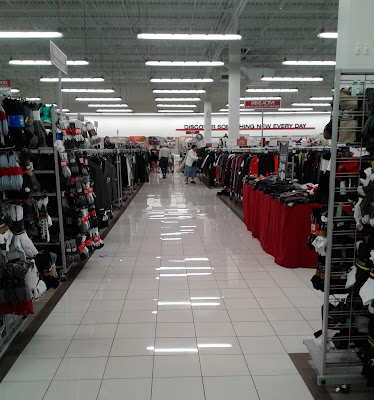 This is the main left side aisle, as seen from in front of Men’s shoes. Housewares are visible in the distance in the back of the store. 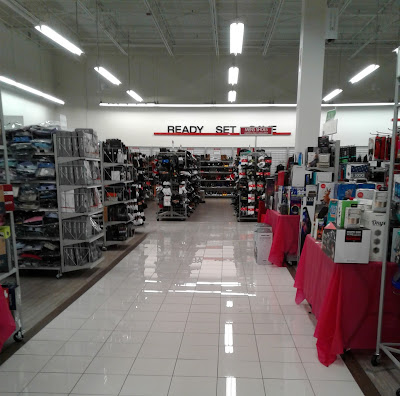 Looking back toward men’s shoes from this vantage point in the main aisle. Some of the extra space in this part of the store was also given to more Christmas gift items, especially electronics, toys, games, and bath sets. 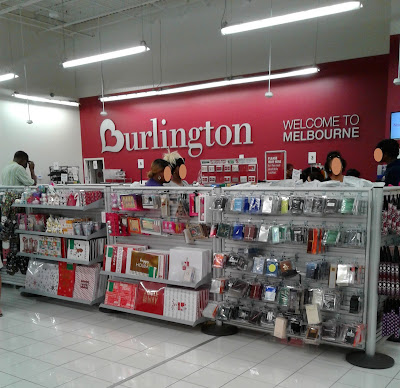 To conclude our interior tour of the Melbourne Burlington, we’ll finish off with some photos of the area surrounding the front registers – mostly for a photo of the wall behind them. This wall includes the Burlington logo and the city name, which is a nice touch to make this store feel more local. 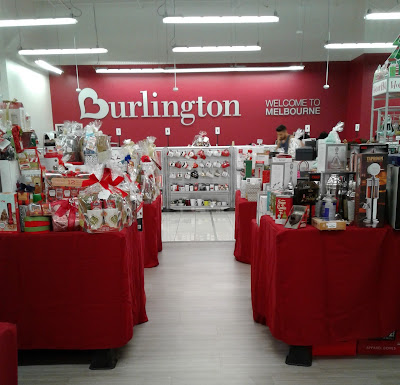 Another view of the front registers, this time from within the Christmas gift section. 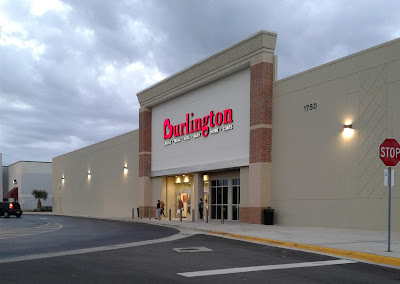 Now we must depart the new Melbourne Burlington (Coat Factory) store, with this photo taken just as the sun began to set. Burlington did a nice job remodeling this place, and it’s good to see something in this building once again! As Sunshine Photos commented, "I forgot to tell you this: funnily enough, Burlington is also opening in Cape Coral's former Sports Authority soon. They sure are taking advantage of all the empty SAs to expand their footprint!" Yes, Burlington is really using Sports Authority's demise to their advantage. Their buildings are a decent size and in strong retail corridors, so I'm sure Burlington finds them to be attractive. Retail Retell also agreed, saying "Burlington sure did take up a lot of former Sports Authorities!" 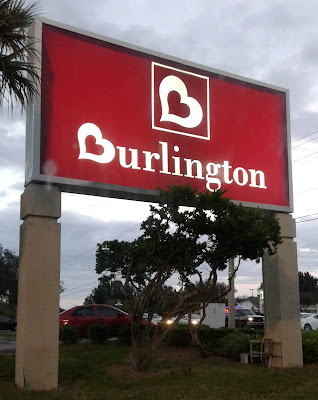 As I was sitting at the traffic light on my way out of here, I happen to pull up in perfect alignment with Burlington’s giant road sign (which was inherited from Sports Authority). I figured it was a good opportunity for this quick photo!

And with that, I will conclude this post on the Melbourne Sports Authority-turned-Burlington. Until next time,