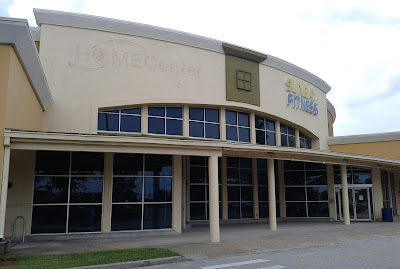 This Kash n' Karry store opened in 2000 as the only Kash n’ Karry to ever be built from scratch on Florida’s East Coast. (Long story short, all of Kash n’ Karry’s other short lived East Coast locations were converted Food Lions, a situation you can read about in more detail here and here). In addition to that, this was also the first supermarket to open in the new Viera mega-development, which was just getting off the ground when this store opened in 2000. This store closed with the rest of the Kash n’ Karrys on Florida’s East Coast and in Central Florida in 2004, when Kash n’ Karry retreated to their core market around Tampa Bay and on Florida’s West Coast. That closure wave began the process of converting the remaining Kash n' Karry stores into Sweetbay Supermarkets. After Kash n' Karry closed, this building was subdivided into Sunbay Fitness and HomeCenter. HomeCenter (whatever that was) closed by the early 2010's, and Sunbay Fitness closed in late 2015 or early 2016. After sitting vacant again for a few years, the former HomeCenter half of the building became home to Brevard County's first Earth Fare supermarket, which opened on January 9, 2019. After 15 years, a supermarket finally finds itself in this plaza once again, which is pretty neat. The Sunbay half of the building is still vacant as of early 2019.

As you can see in the photo above, the former Viera Kash n’ Karry store was one of the really cool ‘circular style’ Kash n’ Karry prototypes built in the early 2000’s. These stores had a very weird circular floorplan and 40 foot high ceilings with windows that wrapped around it in a circle. I have always wanted to see one of these stores in original condition in person due to the strange layout, but I can only think of one that survives into the present day in mostly original form - the Kash n' Karry/Sweetbay/now Winn-Dixie in Wesley Chapel. As long as Winn-Dixie doesn't get any ideas about putting the new Down Down decor into that store anytime soon, the original layout should remain! As vintagefans commented when he first saw these photos, "That's pretty cool, I seem to remember seeing this store in either a commercial or one of Kash N Karry's ads at the time. I remember they were stating in their circulars that they were planning to remodel their existing stores into a circular layout, which never happened, but now I understand what they were talking about."

While this store was the only Kash n' Karry to be built from scratch on Florida's East Coast, I did uncover plans that Kash n' Karry was going to build a second new store in Brevard County at one time. Around the same time plans for this store in Viera came about, Kash n' Karry also submitted plans to build another round prototype store at the northwestern corner of Minton and Malabar Roads in Palm Bay, a store that would have been Kash n' Karry #1918. That new store was to be the anchor of a development called the Palm Bay City Center, which would have transformed (what is still to this day) an empty lot into a bustling shopping center in the heart of Palm Bay. As cool as it would have been to see Brevard County get two round prototype Kash n' Karry stores, the Palm Bay location never came to fruition. Kash n' Karry did sign a lease to anchor the Palm Bay City Center, but I don't know which party terminated the agreement first. While that information really has nothing to do with the subject of this post, I don't know where else I would have been able to share it! Anyway, let's get back to the Viera Kash n' Karry store... 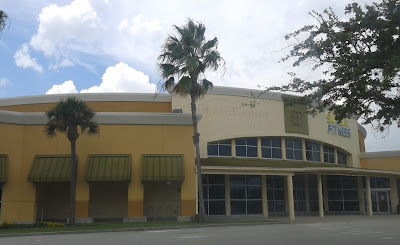 This store retained all of its original exterior elements from when it was a Kash n’ Karry until late 2018, when Earth Fare began their remodel. In this picture, you can make out the rounded shape of the building, which followed the contour of the aisles. As Retail Retell said (in regard to this store's odd design), "Great shot! It sounds like this would've been a cool store to visit :)" Even though this building looks much different from the exterior now that Earth Fare is open, Earth Fare did keep all the clerestory windows from Kash n' Karry, which we'll see and discuss more about later in this post. 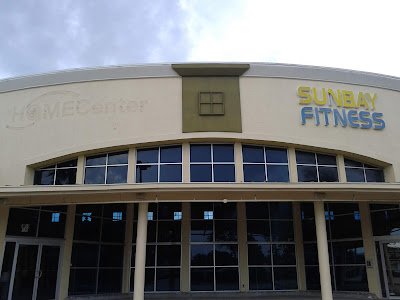 A straight-on view of the large picture window on the curved front of this store. Kash n’ Karry’s main entrance and exit would have been located where the entrances to HomeCenter and Sunbay Fitness were.

A look at the store from further back. The parking lot of this place felt like a forest with all of the trees, and it made getting pictures of this place difficult. However, as vintagefans commented, "As annoying as it probably was for getting pictures, I like this forest look, it's different than the typical sparse thin trees that are in most parking lots. :)" 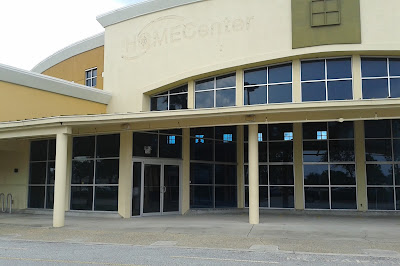 In this photo we're looking toward the left side entrance of the old Kash n' Karry store, which at the time I took these photos, was the entrance into the former HomeCenter space. As I mentioned before, I have no idea what HomeCenter was. I haven't been able to find anything online about them, but I assume it was some kind of furniture store or household design center from what I saw looking through the windows. 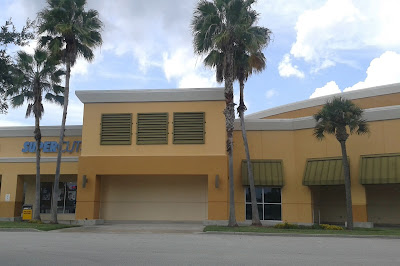 Some of the design elements featured on the left side of the old Kash n' Karry building. 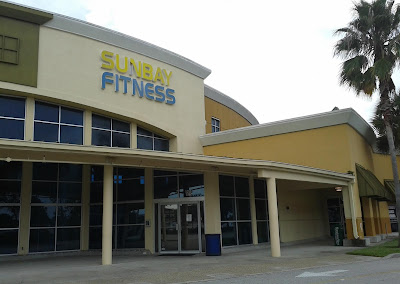 The Sunbay Fitness side of the building is a mirror image of the Home Center half. Sunbay Fitness was a small chain of 3 gyms located in Brevard County, although Sunbay closed this location not long after I took these photos in 2015. As of early 2019, Sunbay only has one of those three locations still in operation, the remaining one being their original location in Merritt Island. 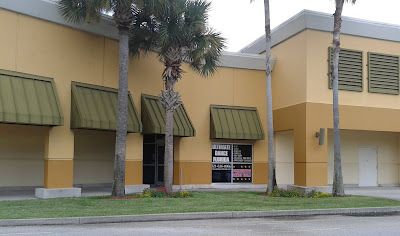 The old Kash n' Karry liquor store was tucked into the right side of the building, and was home to a dance studio when I took these pictures. 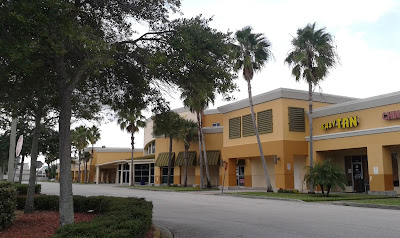 Here is a look across the front of the building from the right side. It’s a very stately looking building hiding behind all those trees. 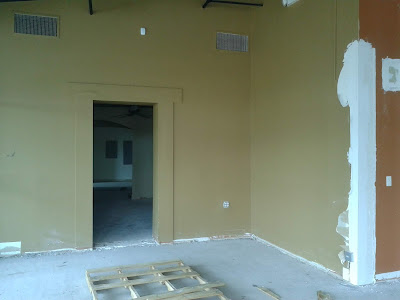 Taking a peek through the front doors of the empty HomeCenter portion of the building, we see this. From this vantage point, there's really not a whole lot to see from Kash n’ Karry, or any remnants explaining how this circular floorplan worked. Everything you see in this photo was added by HomeCenter. 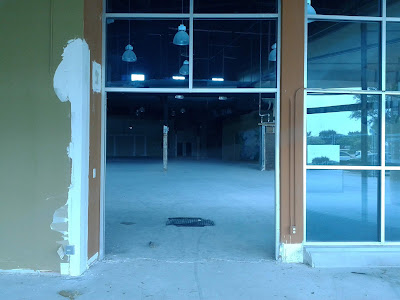 A look through one of the front windows into the vestibule of the former HomeCenter. I don’t know if the interior set of windows are original to Kash n’ Karry or not, but there’s a strong likelihood they might have been. 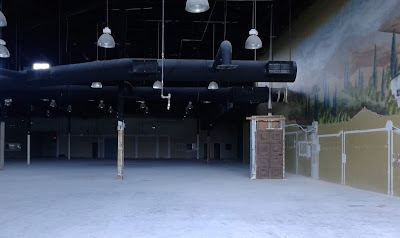 Finally, here we have a peek into the main salesfloor of the former HomeCenter half of the building. Again, no obvious remnants of the circular floorplan to be found here. From the looks of the lighting fixtures and the oddly placed HVAC vents that stop abruptly at the dividing wall, it seems that those could very well be original to Kash n’ Karry (but I can't say for certain). 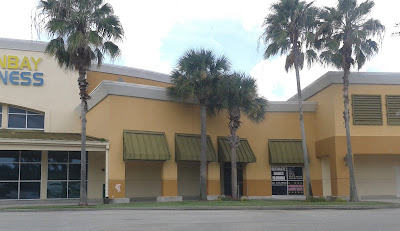 Stepping away from the front windows, here's a slightly different view of the former Kash n’ Karry liquor store space. As BatteryMill Retail said, "Strange to see that this store closed looking quite new like this in 2000, and then divided into multiple stores."

To access the former liquor store, you would have to walk down this curved walkway (which follows the front of the building) to get to the front doors.

To conclude this post, here is one last zoomed out shot at the front of the former Kash n' Karry building and the rest of the shopping center. Even in its the state we saw it in, this was still a neat building, and a reminder of one of the most unusual supermarket layouts to have ever been created. The Kash n' Karry round prototype building is high up on my list of favorite supermarket designs featured in Florida, part due to the design of the building, but also in part due to the mystery of me not really knowing what one of these stores was like way back when!

Anyway, we will be seeing more of this former Kash n' Karry store in the future on My Florida Retail, as I do have some coverage of this place from after Earth Fare opened in early 2019. While the exterior looks completely different now, it's hard to hide some aspects of the Kash n' Karry round prototype store! But before we get to anything new, I still have a lot of old content to move over here, which we'll be seeing much more of as January continues on...

But that's all I have to say for now. Until the next post,