The Toys R Us shutdown occured just a bit before I got into retail, but it was still fresh in everyone's minds. As summer rolled into fall, almost every Toys R Us had continued to sit vacant, only a few finding new tenants after such a short period of closure. The biggest tenant seemed to be the industry's biggest and most profitable squatter: The Seasonal Store.

Across the country, old Toys R Us storefronts were filled by Halloween Citys and Spirit Halloweens, later Toy Citys as the Christmas buying season began. This included my local Toys R Us, TRU #8740. The photos here are from a pair of trips on two dates in September, two weekends that allowed me to collect a decent amount of photos and find some very interesting relics. 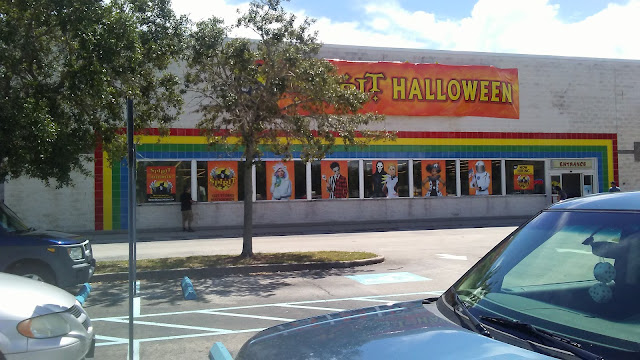 Small trees annoyingly in my way, we see the quick and dirty banner draped atop the Toys R Us sign. Since they left the signage up in this instance, at night you could see the old logo blaring out through the cheap vinyl of Spirit's banner. 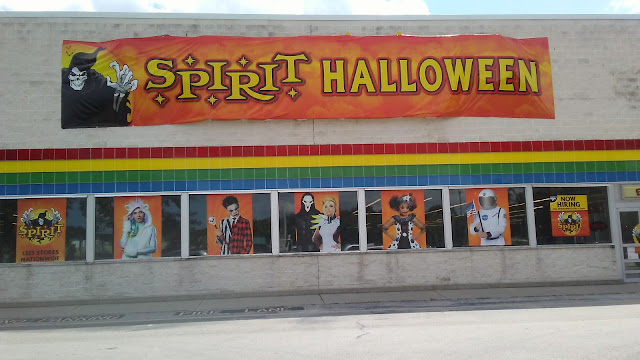 Here's a closer photo that's a bit cleaner, albeit tilter. We get a better look at the various costumes on offer, as well as a Now Hiring sign. I love the tiles on this building, and I hope whatever permanent tenant this building finds decides to keep them. 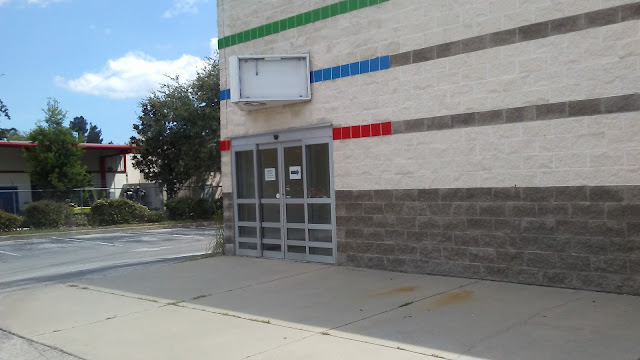 The sad pickup door still sits unused, a panelless sign and some cheap paper signs in the windows telling customers to use other entrances all it can call it's own. 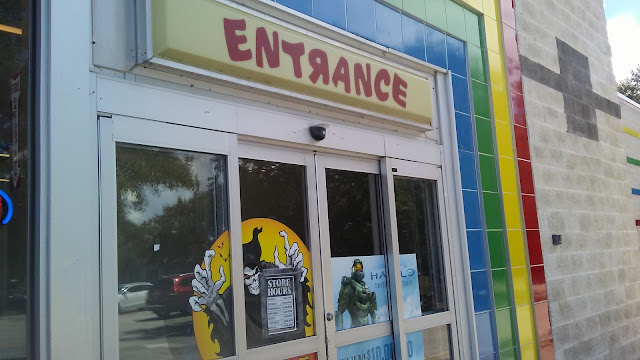 A close-up shot of the Entrance, which features a yellowed vintage TRU entrance panel, as well as the various busy stickers that Spirit plastered on the windows. Spirit Halloween unfortunately did scrape off all the old Toys R Us decals, such as the Store Hours and the Code Adam sticker. 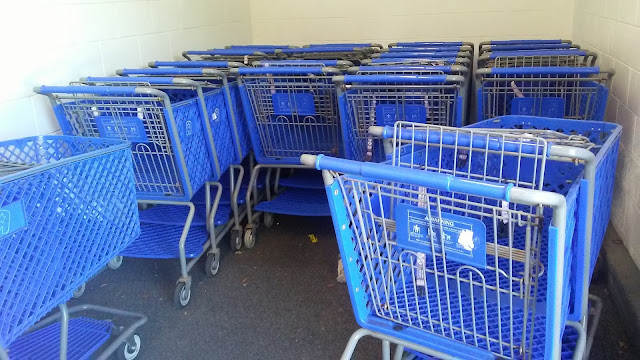 Entering and turning to the right, we see a large pool of carts, left behind and reused by Spirit Halloween. This corner smelled old, unused and forgotten, even though this had only been shuttered for a few months. Such is the effects of Floridian humidity. What fate these will suffer after Spirit's closing is unknown. A recently opened Ollie's in Merritt Island, FL got TRU carts but certainly not from here, but that does mean that even if these carts leave for far away lands we'll have some TRU carts locally. 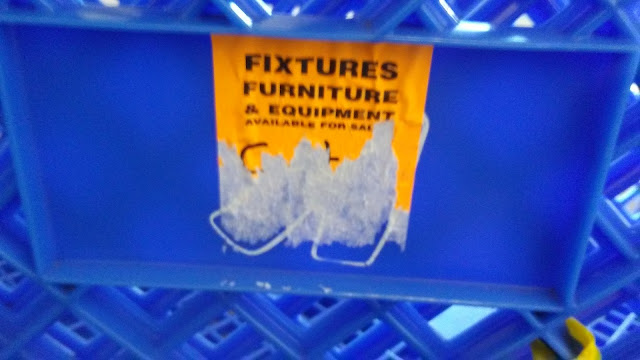 A half-ripped, left over Fixtures Furniture & Equipment tag from the liquidation sale. A more intact and unphotographed label showed these went for about $35 a pop, which looking at prices online isn't too bad for a used cart. 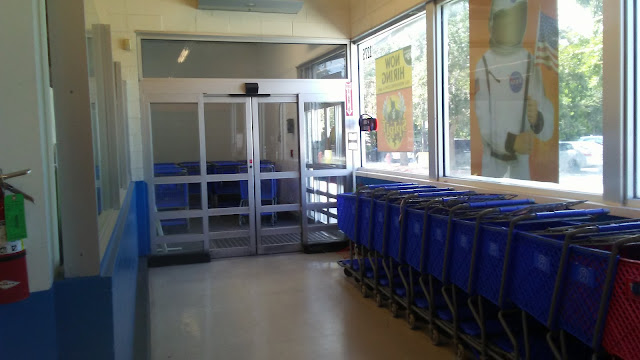 Walking through another set of doors, we see a relatively unmarred TRU entranceway (except for Spirit Halloween's posters) and a long line of TRU carts with one oddball at the end. 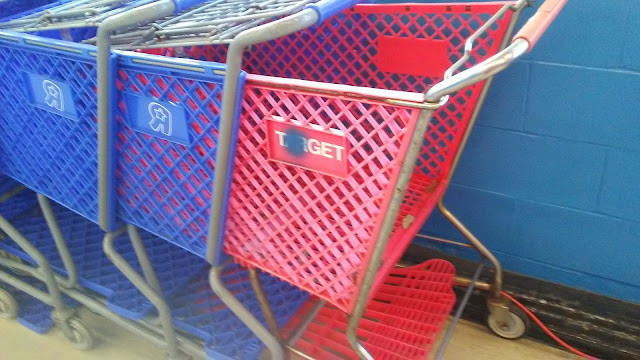 And here's that oddball! Among the droves of TRU carts was this one odd stray. An old Target cart, splotched by blue spray paint, faded heavily, missing a back gate, slightly rusty and sprinkled with leaves. I honestly have no idea where this came from, it looks several years older than it's TRU comrades and looks too ratty to even have been a stock cart. 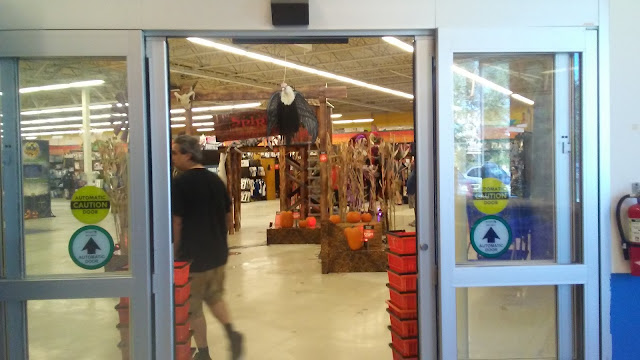 Here we pass through what is the final set of doors, I promise. We begin to see what Spirit has done with the main sales floor. The old shelves have been stripped out, but we can still see TRU lighting and flooring. One TRU aspect is absent, however... 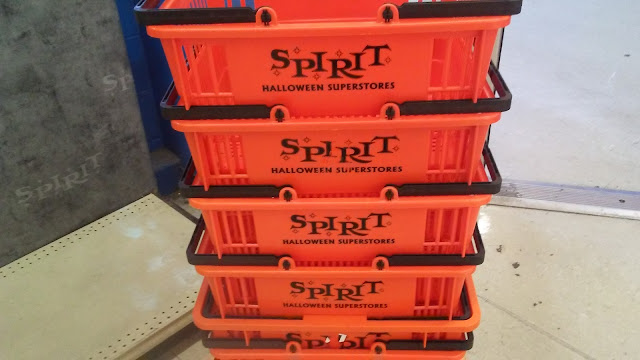 The baskets! Apparently those were a much better seller than the full size carts, because I couldn't find a single TRU basket in the whole store, nothing but these bright orange & black Spirit ones. Behind it is what may be an original TRU piece of shelving. 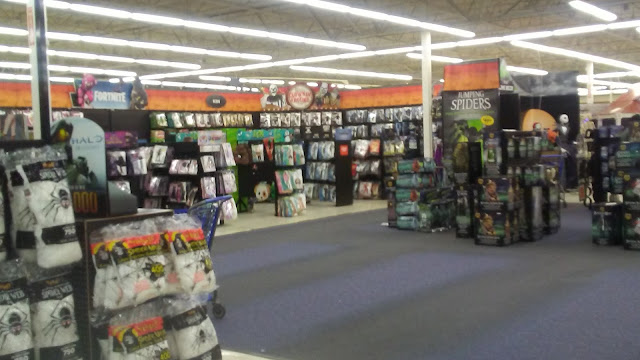 Here we have one of two photos I took of the general sales floor. There's not much to speak of here, save for the Toys R Us carpeting and lighting that Spirit left in place. A TRU cart can also be seen peaking out from behind a display of fake spiderwebs. Knowing this building, I'm not sure they entirely needed to sell fake ones. 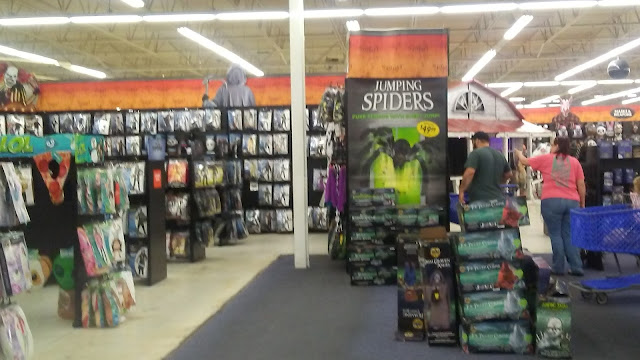 A sea of pegboard, cardboard, tile, and carpet. 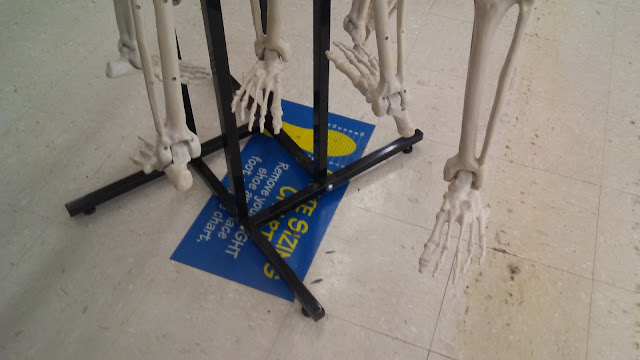 Now we get to the (more) interesting stuff, at least to me. Seen here is a TRU foot-sizing chart, which clearly was too solidly glued to the floor for Spirit to bother to remove. Instead, well, they tried to cover it with a display of skeletons. Keyword here is tried. Prime r/therewasanattempt material. 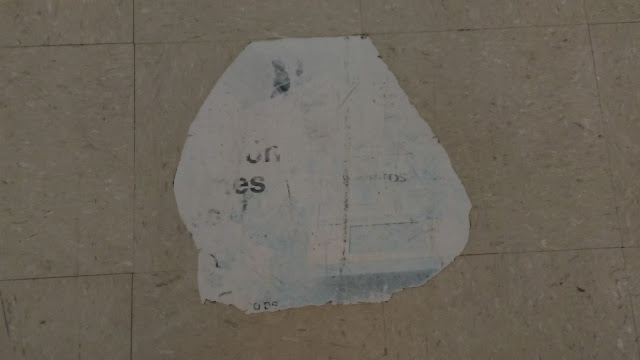 Keeping our eyes glued to the floor, we see an absolutely ancient advert for the original Nintendo DS. Not the Lite, the DSi XL, or the the 3DS, but the good old original brick of silver angles. It's heavily worn, but you can still just barely make out the DS' visage and part of a tagline. Whether this was out for all to see or hidden beneath carpet or shelving is unknown to me, though the extended wear suggests it was probably exposed to foot traffic for an extended period of time. 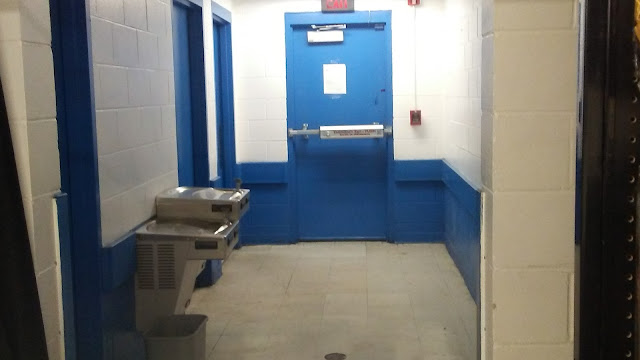 Going through a gap in the endless pegboard, we see the TRU blue bathrooms. Honestly not sure what happened with the lighting to make this corridor look so eerie, but I'm not sure if I'd want to stay in this hallway long. For those interested, the vintage Restrooms sign that AFB found while the store was still operating was sadly absent when I visited. 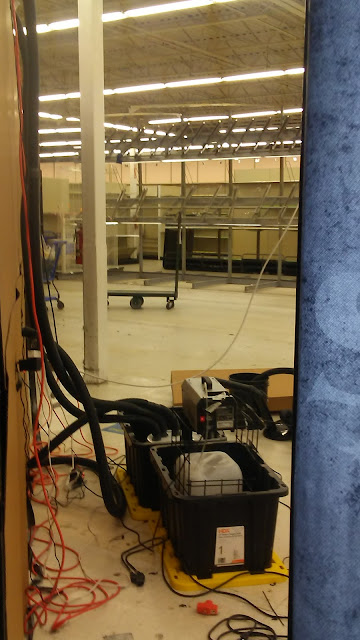 Turning vertical to put our cameras through a much smaller gap in the pegboard near a haunted house display, we can see old shelving lined up and hidden in the unused extra square footage. We can also see the almost fire-hazard worthy pile of cables keeping the electronics running for the display. 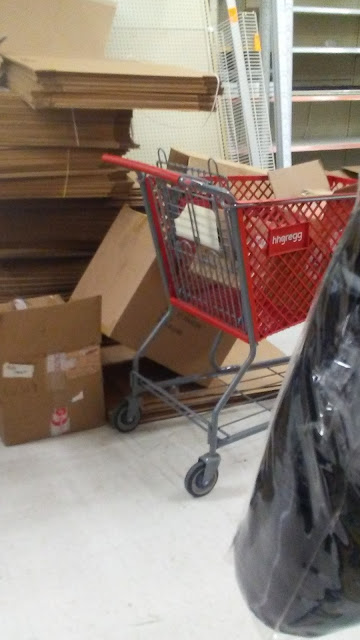 Looking through an employees only flap, amongst the pile of boxes and shelving, we see an hhgregg cart! Whats it doing here? Well, it likely was stolen borrowed from the former hhGregg that Spirit Halloween occupied a previous year, before HomeGoods recently picked up the storefront for their own use. Photos of Spirit Halloween occupying West Melbourne's hhGregg can be found here 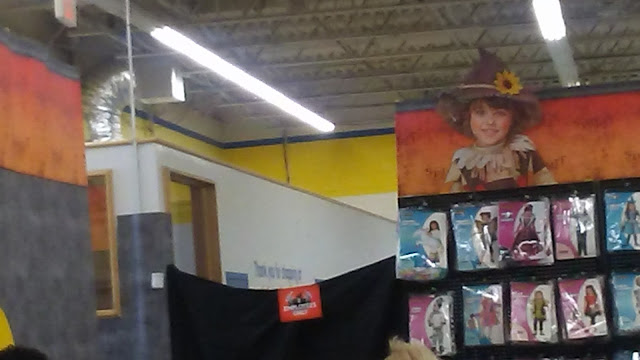 As we venture towards the exit, backing up and zooming in, likely looking like a raving loon to the nearby cashiers in the process, we can just barely see the old "Thank You For Shopping" lettering that adorned TRU's exit, now hidden behind an employees only shroud. AFB's upcoming coverage of this store pre-closure shows that the "Toys R Us" below "Thank You For Shopping" is a delightfully vintage logo probably original to the store's opening date. Shame I couldn't see that. If I wasn't within employee spitting distance I would have stuck a camera behind the curtain directly, but I was paranoid of the whims of bored teenage temps, so I left with just this photo. 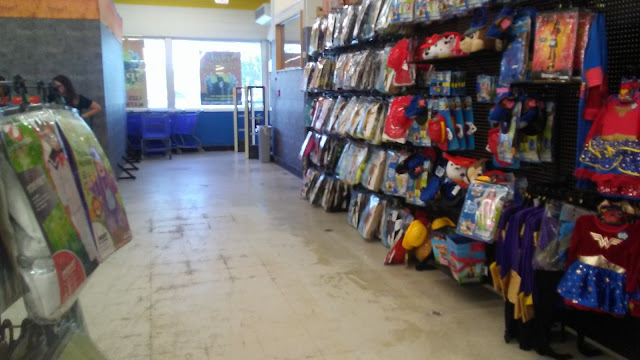 I don't know if this area was underneath carpet under TRU's operation, or was just particulary neglected, but it is nasty. Dirty and dingy tile, surrounded by cheap decorations and flashly childrens costumes all under the roof of a former big-box great. If you could sum up Spirit Halloween in a single sentence, you'd be pressed to do much better than that.

Now, as I left Spirit Halloween for the second time, I noticed something right before I exited. A tarp! Not just that, but a tarp that for whatever reason, was pulled back and had stayed as such, showcasing the well-preserved Returns & Services counter behind. 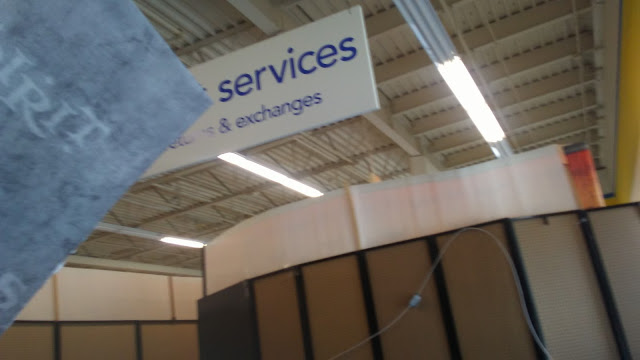 Here we see the tarp making it's presence known, this shot was mostly an attempt to get a photo of the sign, which, I mean sort of worked. We also get a good view of Spirit's numerous card-and-particle board walls. 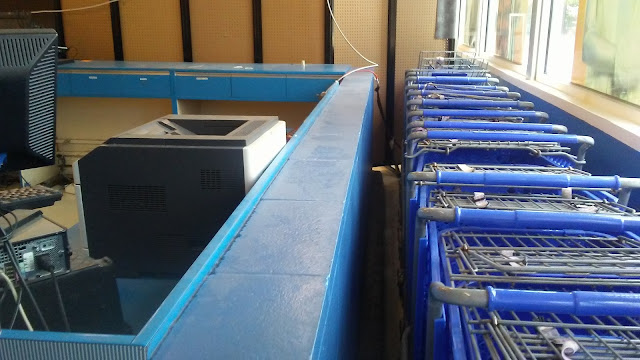 A slightly better photo here, we see the computer system left behind (who wants to bet XP era at least?), as well as MORE CARTS! This place is stuffed to the gills with the things.

Anyways, as we leave this Toys R Us behind, I end my coverage of the store. There is a chance I'll post my photos of it after closure but before Spirit's tenancy, but AFB has similar photos waiting in the wings so I'm not sure if my photoset will escape my Flickr page. This store has yet to find another tenant, and I have no clue as to what may take this space. It's set aside all by itself, unconnected to a larger plaza of any sort, so many tenants that would like to slot into a plaza would be unwelcome here.

Anyways, until next time, this was Cape Kennedy Retail.