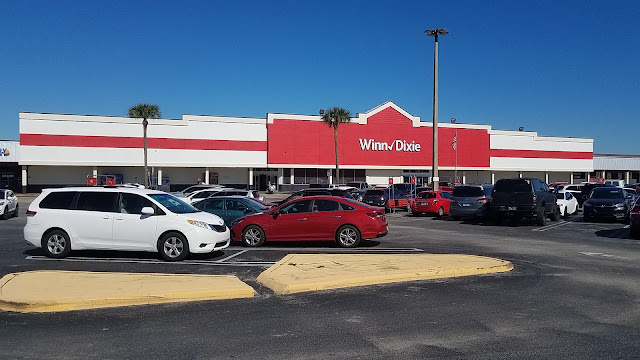 #655 introduced checkout scanning to Pasco County.  Nine NCR 255 registers with scanners were in place on opening day.  Winn-Dixie had begun installing scanners in March 1978, with #655 being the 27th store in the chain to utilize checkout scanning.

This store was one of four Winn-Dixie stores opened throughout Pasco County in the late 1970s; of these, #655 is the only remaining store operating as a Winn-Dixie.  (The others were Pappas Plaza in Holiday that replaced a 1966 unit in the same plaza, East Richey Square in New Port Richey, and Dade Village in Dade City.)

In October 1982, the store was remodeled and expanded on the left hand (west) side.  Twelve years later, #655 expanded again, this time adding 10,000 square feet on the right hand (east) side, to its current footprint at 42,000 square feet, between the existing store and the former Eckerd (now Rent King) in the plaza.  The 2nd generation awning facade was stuccoed over in an attempt to modernize the store's look.

Although news articles refer to this store as being a Marketplace, the facade never carried "Marketplace" signage, instead retaining the classic "DELI - BAKERY" and "THE BEEF PEOPLE" common to Winn-Dixie stores built in the 1970s and 1980s.  This December 2007 Google Street View shows what the exterior of the store looked like between 1994 and 2009.

In February 2009, new Winn-Dixie owner Southeastern Grocers remodeled the store to the post-bankruptcy multi-colored interior (itself a toned-down throwback to Winn-Dixie's pre-Marketplace interiors from the late 1970s and early 1980s), and the original exterior signage was replaced with a 1st generation Winn✔️Dixie sign.

On October 4, 2018, #655 completed its latest remodel, this time to Southeastern Grocers' bright red "Down Down" interior.  This remodel was mostly cosmetic and featured the following changes:

- Self checkouts removed and replaced with two express checkout counters
- New gray checkout counters
- Department names on the walls are now flat decals
- Black tile was installed in the Deli, Meat/Seafood, and Bakery departments
- Refrigerated and freezer cases painted gray
- New signage inside and out
- Three more aisles were squeezed into the store's footprint, increasing the aisle count from 17 to 20

With all its history squared away, let's take a closer look at #655. 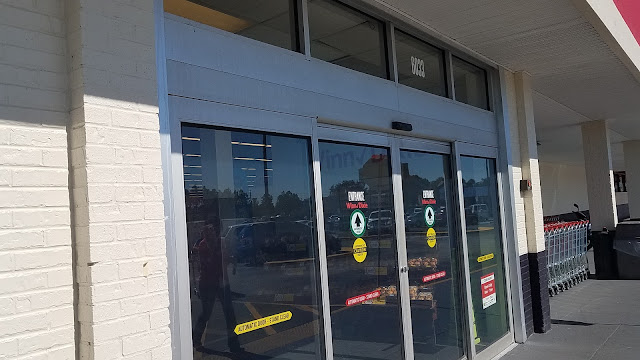 The right hand entrance was added during the 2009 remodel. 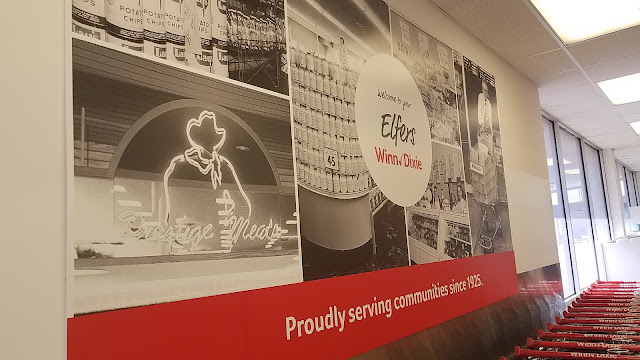 This mural of historic Winn-Dixie photos is on the front wall as you enter the store. 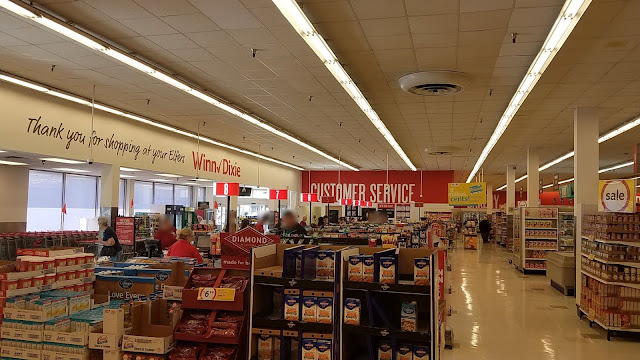 Looking at the front end. The area with sales items next to register #8 used to contain 4 self-checkout registers until the latest remodel. Lighting, round air vents, and flooring were carried over from previous remodels. 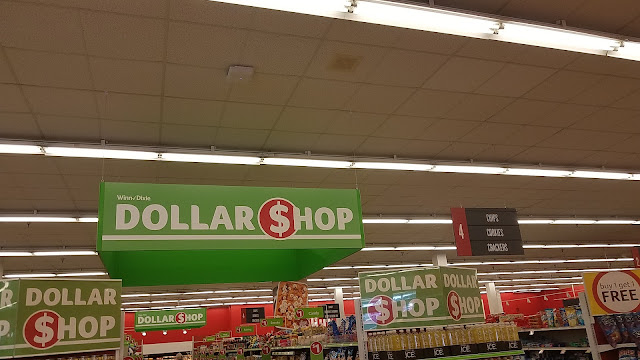 Aisle 5 is signed as the "Dollar Shop", Southeastern Grocers' dollar store-within-a-store concept. All products on this aisle are priced at $1.00 or less. 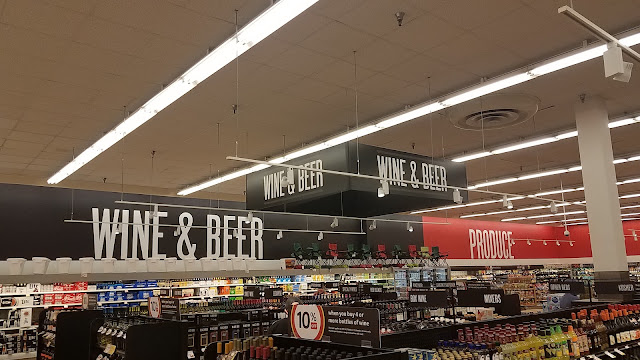 Walking over to the right hand side of the store now, with the Wine & Beer and Produce departments.  The Wine & Beer department and the front end are the only outer walls not painted red (ostensibly to break up the monotonous theme). 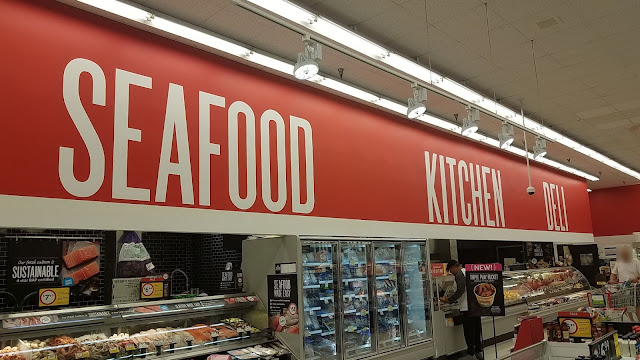 Along the back right wall are the Meat/Seafood and Deli service counters. The Deli department was probably relocated back here from the front left corner of the store during the 1993-94 expansion. 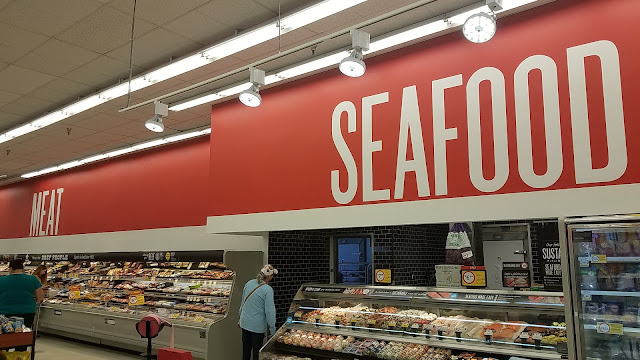 Pivoting over to the left a bit is the Meat department.  The suspended spotlights here and in the rest of the store were introduced with the 2008-09 remodel. 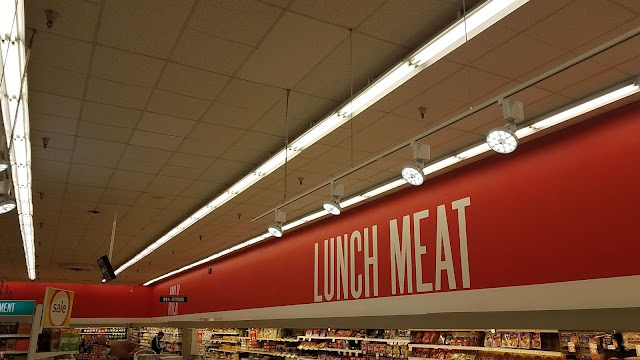 Continuing left down the back wall you'll find Dairy, restrooms, and Lunch Meat. 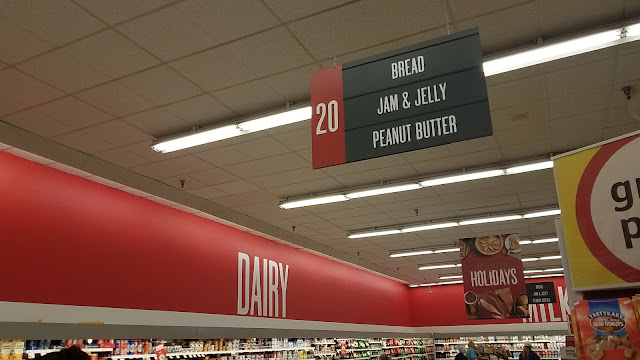 The left wall is home to the Dairy department and Aisle 20, the highest-numbered aisle.  Since this store added three aisles to the grocery and general merchandise areas without any expansion, the aisle widths (except Frozen Food which was left unchanged) are considerably narrower. 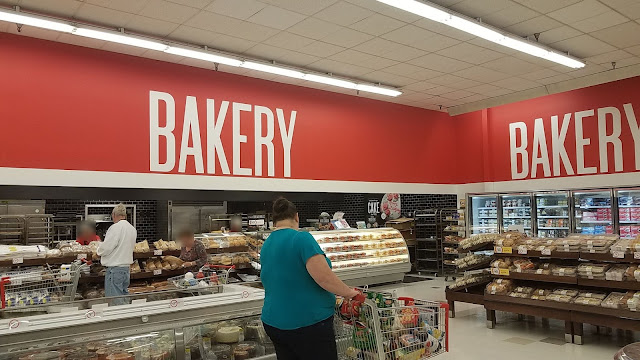 The front left corner of the store is where you'll find the Bakery department.  Until the 1993-94 expansion, the Deli department also shared this space. 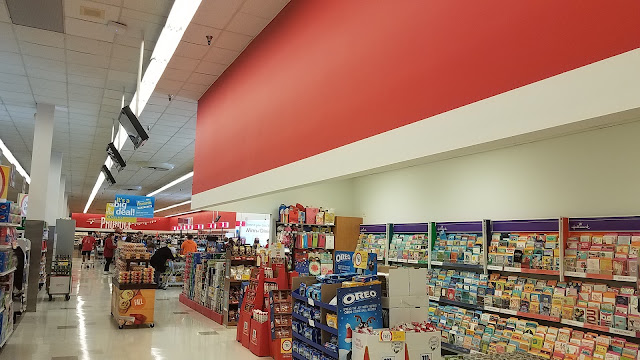 Looking across the rest of the front left corner, this section is a hodgepodge of greeting cards and seasonal items.  In Winn-Dixie stores originally built without pharmacies, typically this space would be where a Pharmacy department would be added.  However, there is already a local pharmacy located in Elfers Square, and thus Southeastern Grocers has no plans to add a pharmacy here for now. 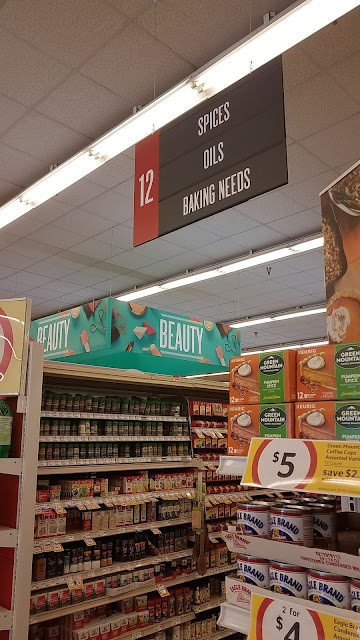 For all of you Aisle 12 fans out there, and a close-up of a representative sign in Winn-Dixie's Down Down interior. 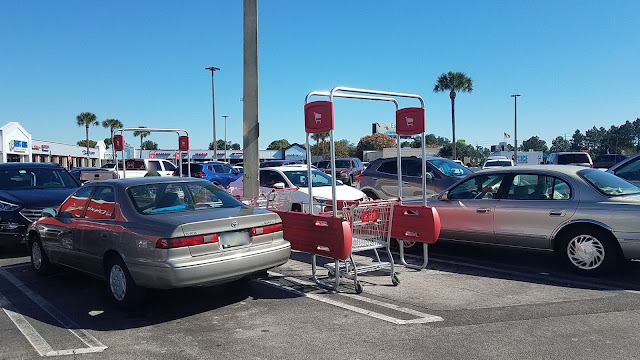 Heading outside now, here are the cart corrals introduced with the 2018 remodel. They look suspiciously like the ones from the former Safeway in Largo.  However, Winn-Dixie #644 down in road in Holiday has the same cart corrals, and was remodeled before the Largo Safeway closed.  Perhaps it's just coincidence. 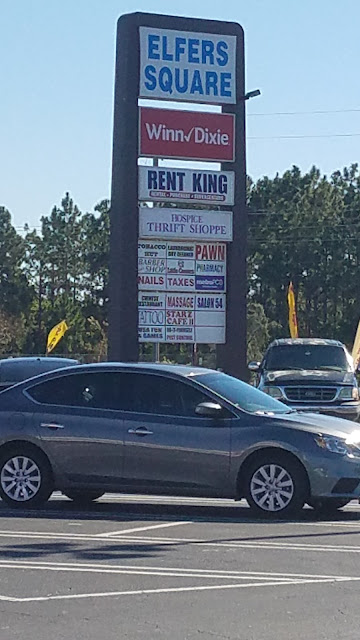