Off to Vero Beach we go to take a look at their rather nice Big Lots store, located on an outparcel of the Indian River Mall. I have to say, this was one of the nicest Big Lots stores I've ever been to. Big Lots did a really good job of converting this store, and it was very clean and presentable when I was here (in addition to looking very modern). 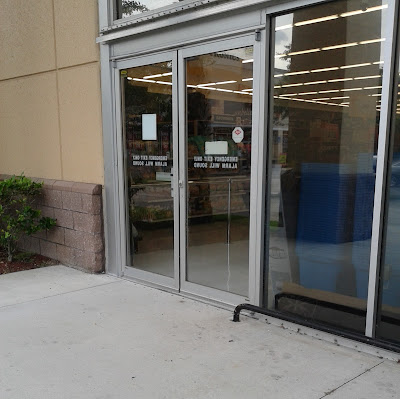 This is a look from the outside toward the emergency exit door at the left side of the building. From a distance, this looks like it's a side entrance into the store (and I wouldn't be surprised at all if confused shoppers tried to walk up to this door and became frustrated about why it wouldn't open). 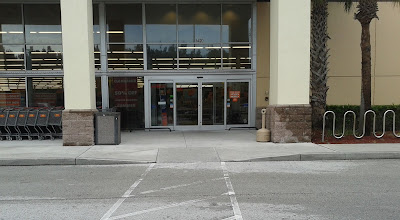 Moving away from that emergency exit, here's a look toward Big Lots' actual entrance. The entryway is set up exactly how Linens N' Things had it from the day they opened. Actually, here's a picture of this store from when Linens N' Things was still around. 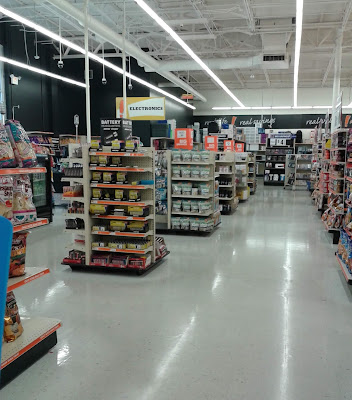 Here we are stepping inside and looking immediately to the left from the entryway, where we see the electronics department and the registers. Big Lots actually attempted to put in some kind of decor here, rather than just using plain white walls like in their older stores. The decor here really did a good job at making this store seem less bland. This store really put off a good first impression too, as Retail Retell said, "Wow! I'm impressed!". l_dawg2000 and PlazaACME concurred by saying, "The Dyersburg Tennessee Big Lots is pretty nice, but this one looks even nicer!" and "Looks nice!" respectively. 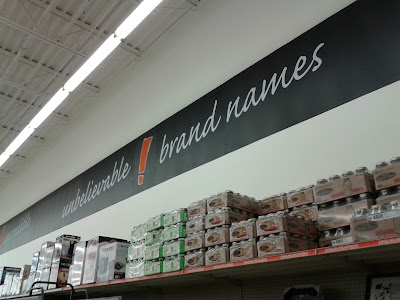 A closeup shot of the stripe that runs around the perimeter of the store. This was taken along the right side wall in the home department. 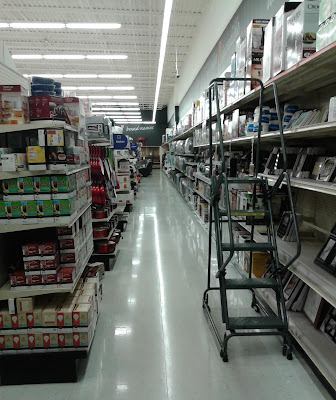 A quick look at the aisle that runs down the right wall of the store. 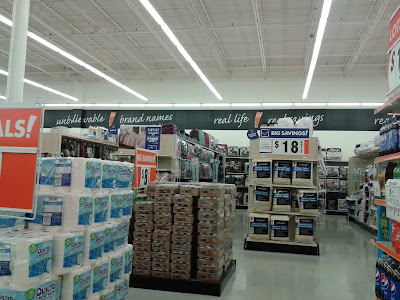 Now we move away from the wall, looking toward some of the home department aisles from the main center aisle. As Retail Retell put it, "This looks nicer than the Greenville Kmart that I may or may not have been in today ;)" 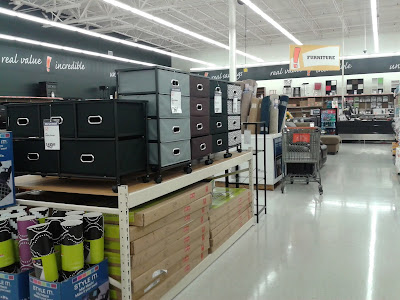 The furniture department, located in the back right corner of the store. I couldn't get many decent pictures of this area due to two employees putting together a fireplace on the other side of that bin of rugs, who kept asking me if I was interested in buying furniture. 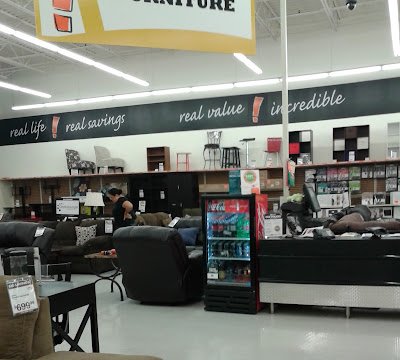 The area around the furniture counter. 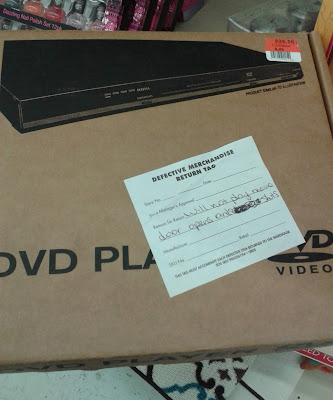 The things a nickel can buy these days... Found on the Big Lots clearance shelf: For only a nickel you could have bought a DVD player that won't play anything. And they say you can't buy anything for a nickel anymore! While it might seem like a strange thing to try to sell, if someone has the same DVD player at home, this is a good buy just for the extra remote (or if you're really technically inclined, the internal parts, as PlazaACME suggested). 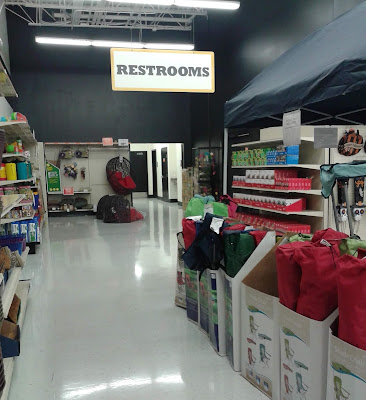 The seasonal department is located in the back left corner of the store, part of which includes this alcove where the restrooms are located. 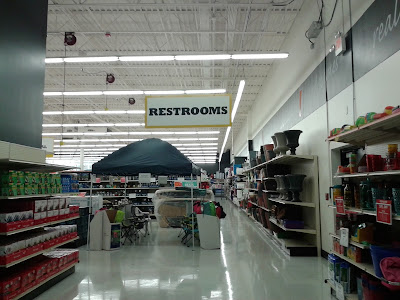 Turning around from the previous photos, we're now looking up the left side of the store from the alcove in the seasonal department. 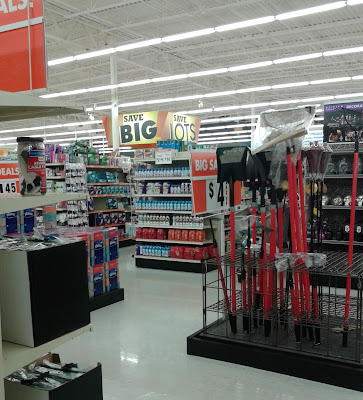 Another random photo from the seasonal department, looking into the center of the sales floor. 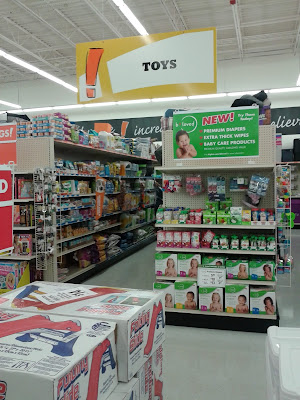 Toys are located in the center left portion of the store. This photo also provides us with a closeup of one of the department signs in this store, which do a good job of incorporating Big Lots' exclamation point logo into the design. 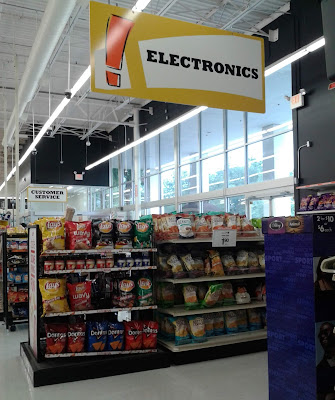 I know in electronics they have "chips", but I don't think that's what they mean!

Actually, the electronics department was located in the aisles behind me. This photo looks across the front of the store, and the placement of the electronics sign actually makes sense if you were to come here in person. I just couldn't resist. 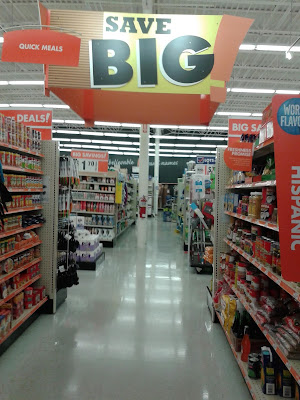 Here we have a view down one of the center aisles in this store. The front section of aisles in this portion of the store is food, and the back section is home to health & beauty and cleaning supplies. Also, there's this giant 3D sign over the very center of the store (more on that in just a moment). 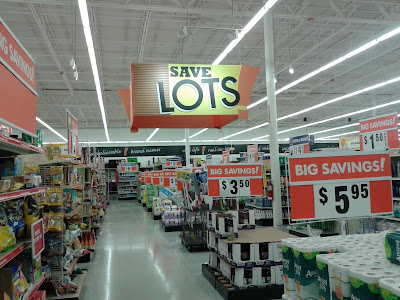 This is the aisle that divides the center aisles in half, looking toward the left side of the store. 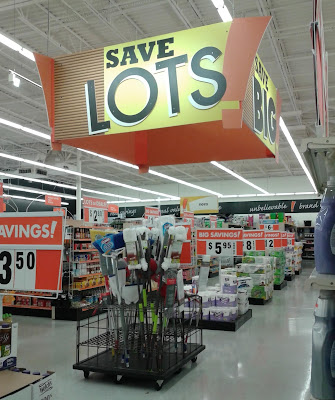 Save Big! Save Lots! This giant 3D sign was another nice way to make the decor in this store seem a little more creative and exciting. I'm pretty sure I saw a picture of a Big Lots store with a prototype version of this decor that used 3D signage for the department signs as well, but I can't seem to find that picture anymore. 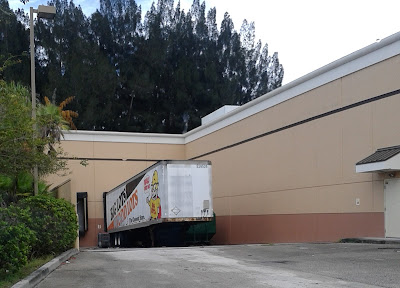 As I conclude this little tour of the Vero Beach Big Lots, what's that relic I see behind this relatively new store? 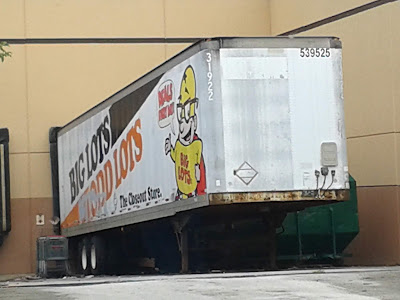 It's a 90's Big Lots/Odd Lots co-branded trailer, featuring Big Lot's old spokesman, Closeout Man! Closeout Man was extremely prominent in Big Lots stores in the 90's, even being featured on all of the old aisle signs, and even got his own bean bag stuffed figure. Also, here's a commercial from 1994 featuring Closeout Man.

So that's the Vero Beach Big Lots! I have some photos of Big Lots' original location in town too, but that will be a discussion for another day.