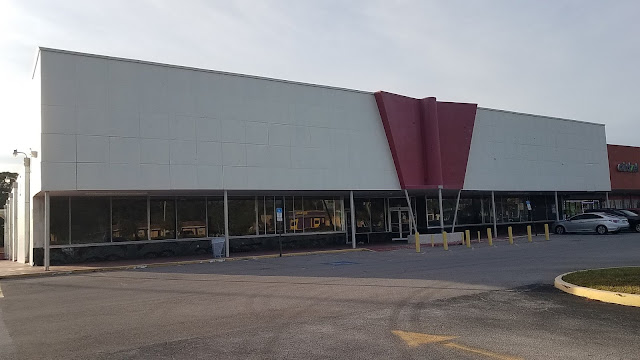 While there are some Wing-era (1954-1970) Publix Markets still standing along the Gulf (west) coast of Florida, I believe this is the last Wing-era built Publix building with its Wing facade relatively intact in the area.  However, its days are numbered as of this post (as we'll see later), so I headed down to south St. Petersburg to take a closer look.

Opening day for #64 was on January 18, 1961, the 63rd Publix in the chain (though actual store #63 was in Tampa) and the 7th location in St. Petersburg.  The Lakeview store featured a Danish Bakery in an adjacent storefront, the third such bakery in Pinellas County.  (The bakery is now a Cricket Wireless retailer.)  The initial building footprint was roughly 21,120 square feet.

The store number, 64, was reused on a subsequent former Publix in Bradenton when that store opened in June 1983.


#64 was the first in the chain to introduce a colorful interior.  The ad above states,

"The balloons go up announcing a new mark of Publix leadership!  Color!  You'll find unique and exciting color throughout the new Lakeview Publix.  Color!  ...  to accent the Happy Difference in shopping at PUBLIX."


To further convey the "Color!" message, Publix attached a colorful hot-air balloon to the building for the grand opening.  One of the store managers utilized his archery skill to shoot streamers up and over the parking lot light poles, where previously a team of installers would run up and down ladders to attach streamers to each pole.  This creative strategy cut the streamer installation process in half and required only one person to do the work.


The above picture represents what the interior of store #64 probably looked like in the 1960s, due to that store's air vents being similar to Lakeview's.  For a color representation of what #64 possibly looked like, take a look at Pleasant Family Shopping blog's post regarding store #70, Coral Ridge Shopping Center in Fort Lauderdale, here.


The surrounding area experienced a significant demographic shift in race and income during the 1960s and 1970s due to desegregation via busing and white flight.  On October 23, 1982, Publix closed #64 outright without a direct replacement, citing poor sales.  Publix, however, would open store #259 two miles south at Bay Pointe, on US 19 near the Pinellas Bayway, two years later.

Like most Publix- developed and occupied shopping centers built in the 1960s, Lakeview also had the signature neon arrow sign.  The picture above was probably taken after Publix left the plaza in 1982, because the usual marquee/Publix sign at the bottom is missing.

A month after Publix closed, a local cost-plus supermarket venture called "Sun World", opened up in the space.  However, Sun World was not successful, and the location was closed by March 1985.

In April 1986, Sunshine Thrift Store opened a location in the old Lakeview Publix, and would operate there for the next 15 years.


Seeking a more modern location, Sunshine did not renew its lease and closed in March 2001.  As you can see in the photo above, the striped terrazzo was then intact.


In December 2001, Associated Grocers of Florida opened a Price Buster location in the old Lakeview space.  A low-cost grocer similar to Save-A-Lot, Price Buster overhauled the store, replacing the floor, cases, and restrooms.  Since the Wing was in its present state dating back to at least this November 2007 Google Street View image of the building, it's possible the Wing was clipped back in 2001 also.


In March 2011, the store became a U-Save but affiliated with Bravo Supermarkets shortly afterward.  Bravo closed up shop in 2014, and the old Lakeview Publix building has been vacant ever since.

So after that long history lesson, let's take a tour of the exterior of the store. 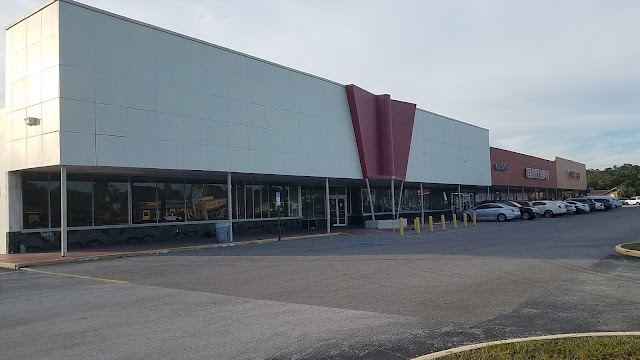 The exterior facade has not been significantly overhauled since 1986. 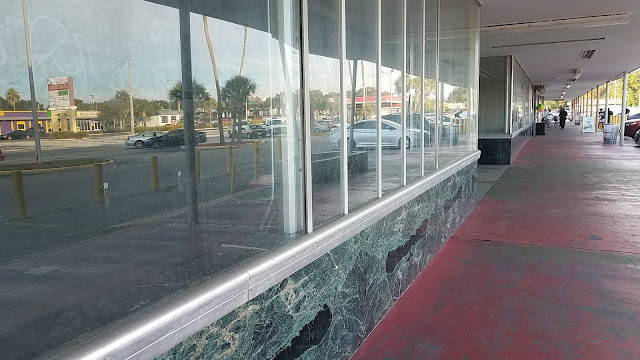 The exterior green marble, characteristic of Publix markets built into the 1970s, is relatively intact. 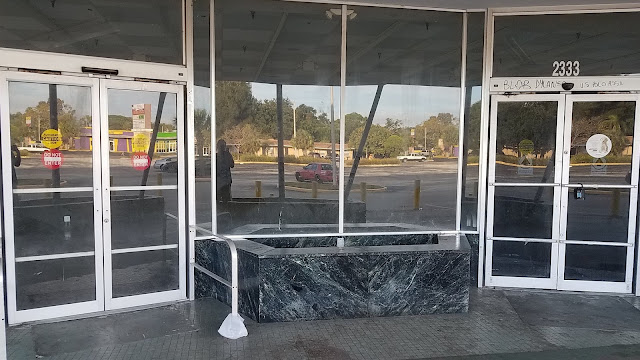 #64's entrance and exit doors are likely the originals from 1960-61.  The entrance door swings into the store, while the exit door swings outside.  Remnants of the original pressure plates on the floor opening both doors are still present more than 36 years after Publix left the building.  These swinging automatic doors were typically replaced with sliding doors during remodels starting in the 1970s. 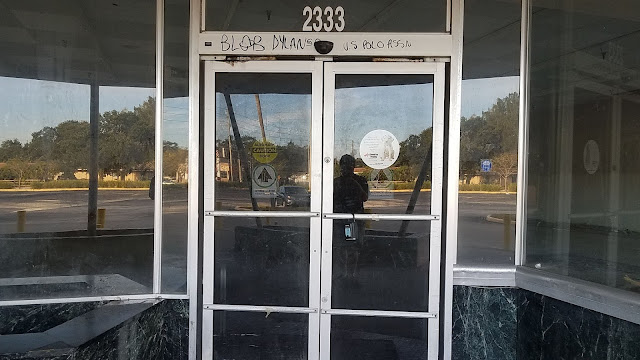 Another look at the entrance door. 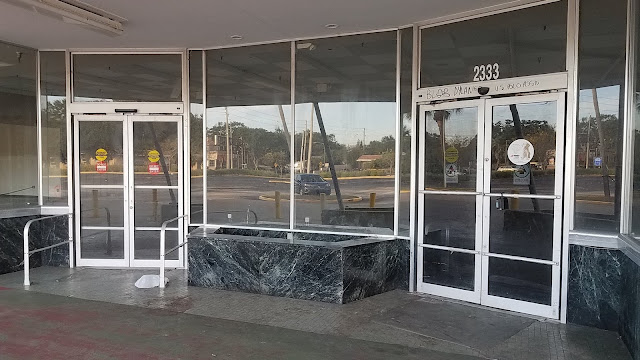 Both doors had pull handles shaped like the Wing, but those pulls were probably removed when Publix left in 1982.

Looking into the Lakeview store now... 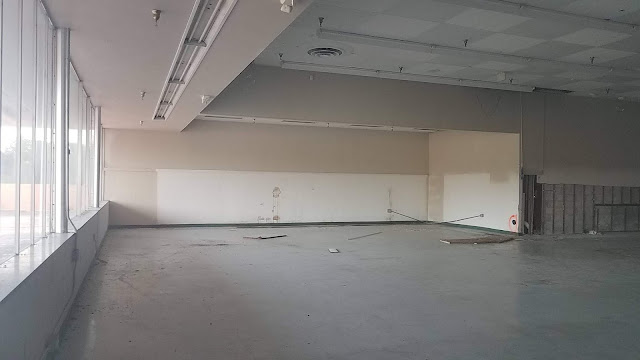 On the left side of the store is where the produce department alcove would have been in the old Publix.  #64 had its Danish Bakery in the storefront to the right of the store (then 2333, the Publix market's address was 2375) until its closing.  Windows, support poles, and cove lighting appear to be the originals. 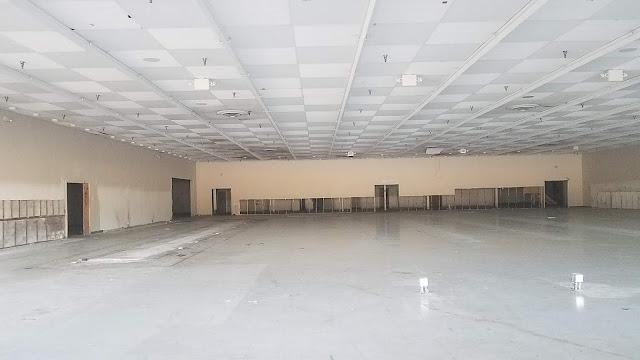 Back wall would have been the meat department, and if this store had a deli, it would have occupied the back left corner of the store.  (Deli was located in the back right corner starting in the 1970s stores.)  The ceiling tiles, air vents, and 8 foot fluorescent light fixtures appear to be original.  The green striped terrazzo floor was redone when Price Buster moved into the building in 2001. 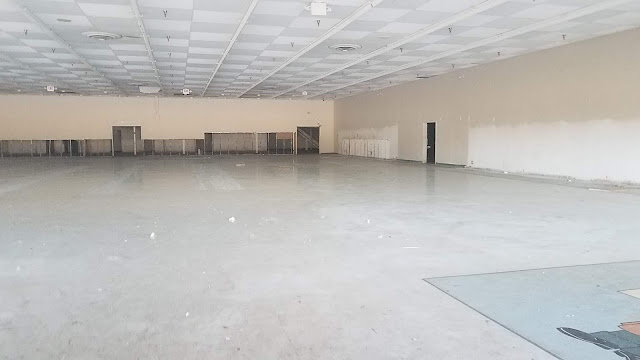 The right wall would have been Publix's dairy department. 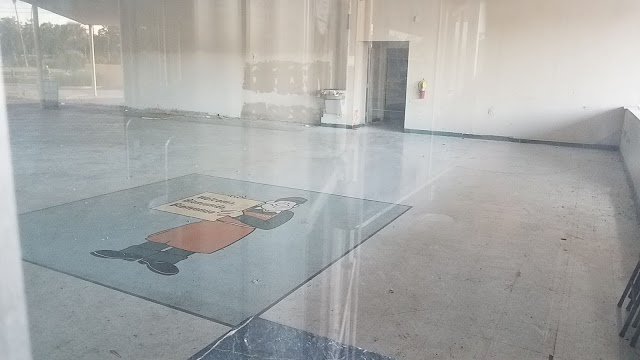 The welcome mat, featuring "Buster", is a Price Buster remnant. 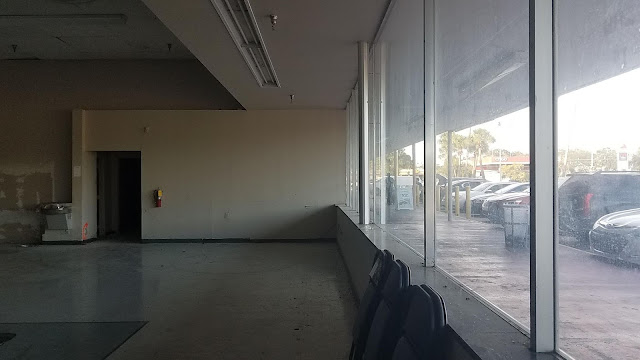 When Price Buster set up shop, the front right corner was reconfigured, removing the original customer service and office space, as well as the restrooms.  The new restrooms were relocated into that dark hallway.  Windows, metal support beam, and marble sills are all Publix remnants from 1960-61. 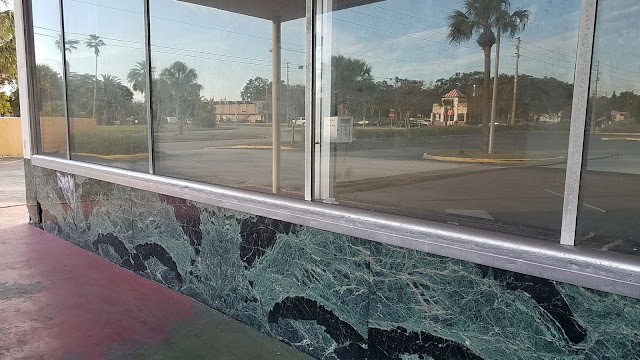 With the store's interior covered, let's take a walk out back... unfortunately, something damaged the green marble under the first window section. 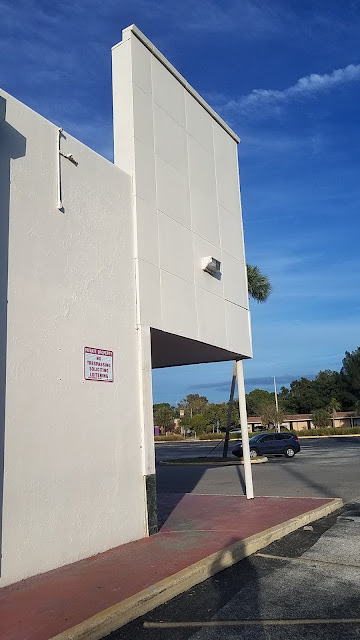 These exterior tiles on the left side and front of the building are Publix remnants and basically have only been painted a few times over the years. 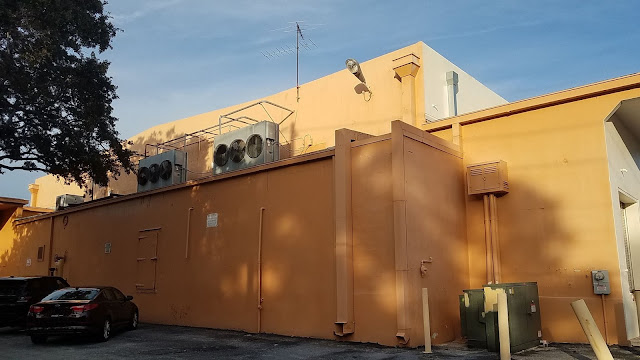 At the back of the store, you'll see a characteristic of early Publix Wing stores - a peaked roof at the center. 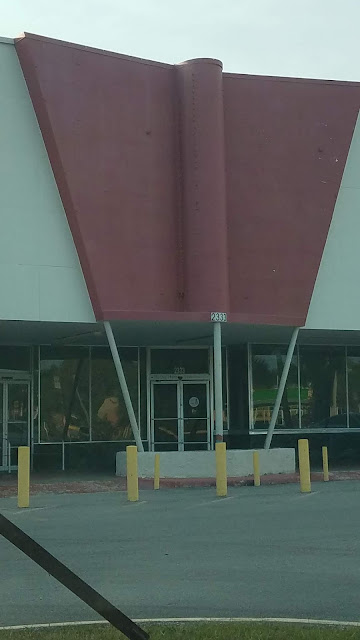 Heading back to the parking lot for a final look at the wing.  The Wing structure has been clipped, and the neon lighting on the center "waterfall" post is long gone.

While there are other former (here, here, here, here, here, here, here, and here) and current (here) Wing-era Publix buildings still standing in Pinellas County, Lakeview/#64 is the only one in the county that as of this post still has part of its Wing.  However, the Foundation for a Healthy St. Petersburg in May 2018 signed a 10-year lease on the building, and plans extensive renovations which were scheduled to begin in November.  More on that here.

By Fall 2019, the Social Change Center in the old Lakeview Publix building will have undergone extensive renovation, and it's likely very few, if any, of the Publix remnants will remain.

Thanks for reading, and until next time,
duckman66