This Winn-Dixie opened in 1971 with the rest of the plaza. After a not-too-shabby 42 year run, this Winn-Dixie closed in 2013 when their lease expired, and Winn-Dixie chose not to renew it even after the landlord pleaded with them to stay (with the landlord going as far as offering to renovate their entire store at their expense just to keep Winn-Dixie from leaving). It has been rumored recently that Walmart Neighborhood Market has taken an interest in this space, and may open a store here in the not too distant future.

On the opposite end of the plaza from the now-closed Fort Pierce Kmart we find the plaza’s former Winn-Dixie store. It was at the time when this Winn-Dixie closed in 2013 that the local newspaper also leaked the fate of the Kmart three years in advance, stating that Kmart was more than likely not going to renew their lease when it expired at the end of 2016 (which did happen). In addition to the empty Winn-Dixie and now-empty Kmart, this plaza also had a number of other vacancies, including most of the plaza to the right of the old Winn-Dixie. If Walmart is indeed interested in this space, it may help boost this plaza back to life. However, I’m still not sure what would want the old Kmart building, considering this area isn’t the first choice for retail these days, and how bad that building was kept by Kmart all these years. A flea market would be the only thing I can think of moving into that Kmart space anytime soon. Roses Discount Store would also be an option now that I think about it, but again, I don't know just how much that building had been left to deteriorate these last few years to where anyone may find it attractive. 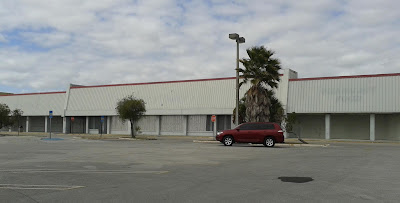 In this photo you can somewhat make out the labelscars from the “Marketplace” (center of the awning) and “Pharmacy Food” (right side of the building) signs. While this store did get a Marketplace era remodel, Winn-Dixie never made any Marketplace era modifications to the exterior other than new signage. 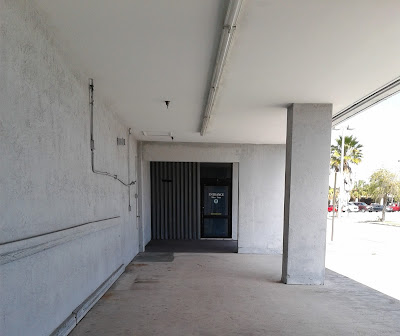 Looking from the plaza’s walkway toward Winn-Dixie’s main entrance we have this somewhat eerie, quiet scene. While most of the building was sealed up tight with hurricane shutters, it looks like they left a panel or two off in order to access the door… 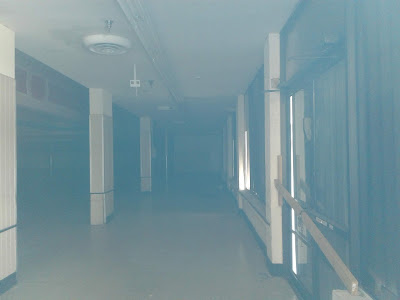 Considering how dark the building was (no lights were left on and almost all the windows were covered), and how dirty the glass in the door was, this was the best I could do for interior photos. Even though the photo is a bit hazy, we can still see much of the entry vestibule. Shopping carts would have been stored directly in front of me, with the registers immediately though the opening into the main store. Winn-Dixie’s emergency exit is that door immediately to my right, with the board through the handles. 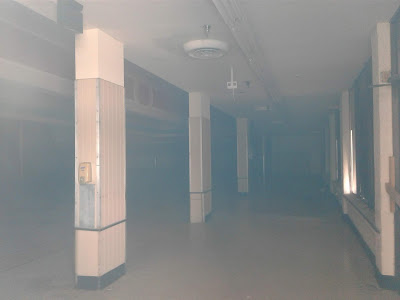 This photo was my attempt to get a better look into the main store. You really can’t see much more in here compared to my other interior photo, although the produce department is barely visible off in the background. You can also see a good bit of decor remnants in here from the old Marketplace interior. If I recall correctly, this store had the late 90’s yellow/white/teal version of the Marketplace interior. 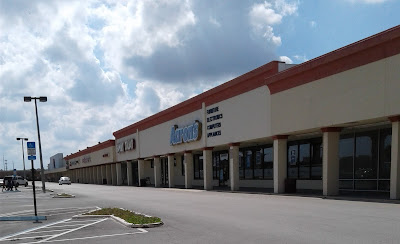 Anyway, while not directly related to the old Winn-Dixie, located between it and the Kmart we find the space that was home to the Fort Pierce Luria's catalog store. Located at 2045 S. Federal Highway, this Luria's store opened in the early 80's. I don't know what this space was originally, as I'm pretty sure Luria's was not the original tenant in this space.

For those of you who don't know, Luria's (originally named L. Luria and Sons) was a catalog showroom store similar to Service Merchandise. They were a chain of well over 50 stores at their peak, all located in Florida. Luria's expanded rapidly throughout Florida in the 80's to most parts of the Florida peninsula, but began to decline by the early 90's after the founding family sold off the business. Not only that, but catalog showrooms as a whole began to decline in the 90's, which led to Luria's eventual demise in 1997. The Fort Pierce Luria's closed prior to the rest of the chain (sometime in the mid-90's), and has since been split between an Aaron's Rent to Own and Family Dollar. In the background you can also see the now closed Fort Pierce Kmart.

That all I have for now. So until the next post,

AFB
Posted by Albertsons Florida Blog at 11:21 AM