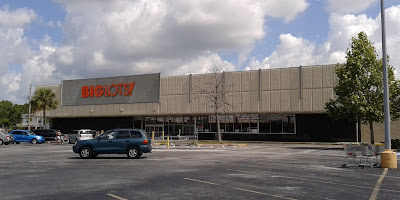 Publix originally opened in this space in 1978, around the same time as the next door Kmart (which closed in March 2017). This store was a relocation from the original store #136, a few blocks to the east of here. Publix moved from this location in 2000 when store #707 opened around the corner on John Young Parkway (just a little to the north of the original location of store #136). This building sat vacant until 2010 when Big Lots opened here, relocating from their older store (#577) a few miles to the east (which was also a former Publix building).

As I said in the above blurb, this store was the second Publix #136. The original Publix #136 opened in 1967 a few blocks away in the Town Corral Shopping Center (1202 N. John Young Parkway, or Bermuda Ave. as it was known back then). The original Publix #136 served shoppers for 11 years before it relocated to this complex with the new Kmart store. For more information on the original store, I discussed that location in more detail toward the end of this AFB post (the original store has a bit of an interesting past).

Anyway, as for the second Publix #316: This building is an impeccably preserved 1970's Publix from the exterior, retaining all of the original exterior elements (well, except for one - I have a rant about that coming up a few photos from now). While the exterior here is completely classic, Big Lots gutted the interior of the building before they moved in, so the interior is all Big Lots now. Unfortunately, I couldn't find any traces of Publix remaining inside, so Big Lots was quite thorough with their remodel. However, we will still take a quick look around in there, as this was actually a very nice (and large) Big Lots. Now with Kmart gone, and with Walmart and Target located on the far western fringe of town, Big Lots will probably be picking up many of the former Kmart shoppers to fill the discount void. The now-gone Kmart was popular with locals in the surrounding neighborhoods that didn't want to deal with the traffic on 192 to venture to the edge of town. 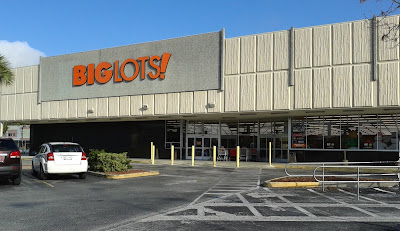 A closeup view of the classic 70's Publix exterior. Seeing an operating Publix that still looks like this is extremely rare these days, if not impossible. One of the last Publix stores to still retain this look in a nearly unaltered state, store #66 in Sunny Isles Beach, FL (near Miami), was torn down in 2017 as part of Publix's never ending effort to keep their stores fresh and modern. 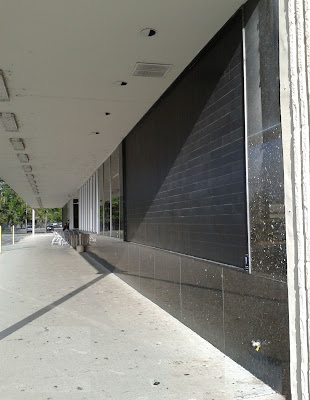 As you may (or may not) know, many Publix stores built from the 50's through the early 80's (and sporadically through the early 90's) had awesome tile murals depicting various food and/or local flare themes on the fronts of the buildings. Many times when these Publix stores close, these tile murals end up getting torn out or destroyed during renovations by the new tenant. Thankfully, the tile mural here was able to survive the remodel here - however - WHAT WAS BIG LOTS THINKING HERE?!?!?!?! They left the mural in place, but they painted over it in black!!! What is even more bothersome is that Big Lots' former Kissimmee store, also a former Publix, still retains its murals to this day in unpainted over fashion (and I have photos of that store which I will post one day). Here's a photo of this building taken right before Big Lots moved in, showing the murals still in-tact. As much as I would love to sneak out here one night with a bucket of paint remover, I will at least be thankful that Big Lots left the mural in place, even if they did this to it. I guess painted over is better than being a bucket of tile fragments. Retail Retell agreed with my sentiments: "I agree, that's awful! Still better than destroying it completely, as you say, and maybe one day it will reemerge. But that is pretty sad that it's just stuck in this state for right now." 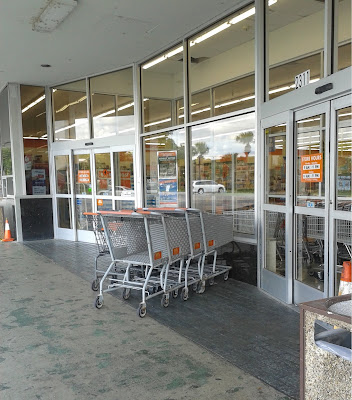 The entryway into the store, which still retains the original Publix configuration. Over the years, many of these 70's stores had glass vestibules added to the front or other entryway reconfigurations. What you see here is the original entryway design this store opened with back in 1978, with the slightly angled doors leading into the main store. Once we step inside, though, all of the classic Publix charm vanishes in favor of semi-modern Big Lots. 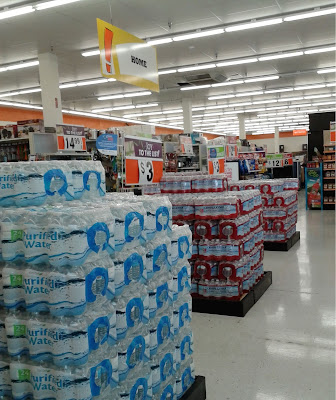 Like I said, no Publix to be found in here. This photo was taken after stepping through the front door, looking toward where frozen food and the bakery were originally. Big Lots tiled over the old striped terrazzo, and they also tore out the raised ceiling over the center of the store. When the ceiling was torn out, the old square-shaped Publix lights were removed and replaced with the fluorescent track lights you see now. For an idea of what this store would have looked like back when Publix was still here (and to see some of those other old Publix features I just described), this album (one of my favorites ever posted to flickr - it doesn't get old looking at those photos over and over again!) gives a very nice tour of a vintage 70's Publix during its final days in 2006. 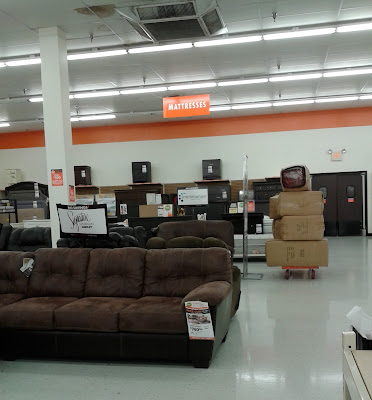 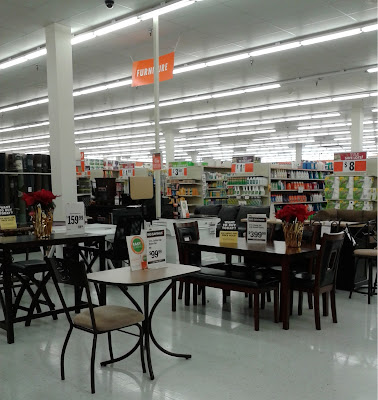 The edge of the furniture department prior to the remodel. For the remodel, it looked like they knocked out a good three or four aisles of merchandise in order to expand the furniture offerings here. 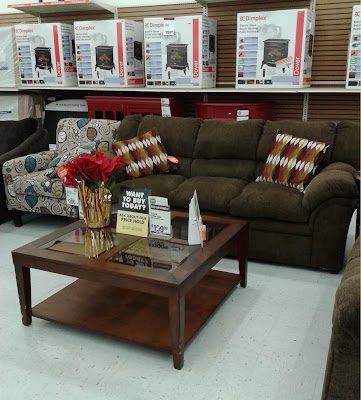 I don't exactly remember why I took this photo, but I think it may have been because that sign next to the poinsettia looked old to me. I don't think it is as old as I first thought after looking at it closer - it's just badly faded. 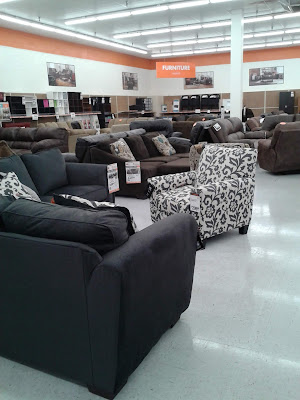 And here's a photo of the furniture department post-remodel. They didn't do much, but it's amazing how a few pictures and new signs can dress up what was previously a rather bland area. The "Furniture" sign you see in this photo is in Big Lots' latest signage style. The store looks much better overall with one consistent signage style over the two older mismatched styles that were here previously. 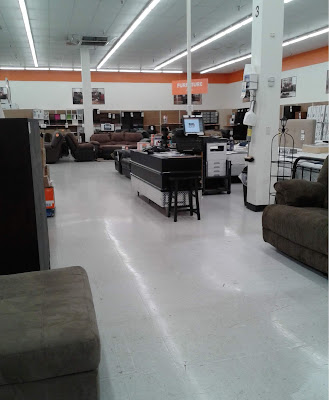 Another look into the expanded and remodeled furniture department, this time as viewed from the back aisle. 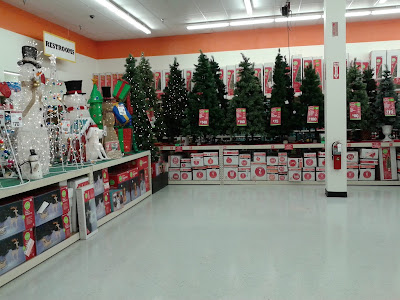 The back right corner of the store is home to the seasonal merchandise. The Christmas merchandise was just being put out around this time, which is why the center of the department looks so empty in this photo. 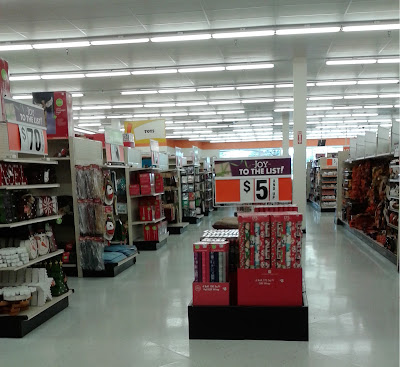 This is the main aisle that runs along the right side of the store, as viewed from the back near the seasonal department. 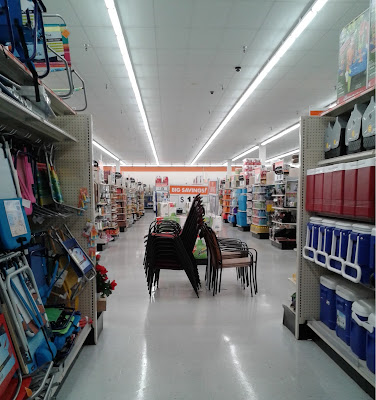 Looking from the right side of the store toward the left side. The center portion of the store was home to the food, health and beauty, pet, hardware and cleaning supply departments. 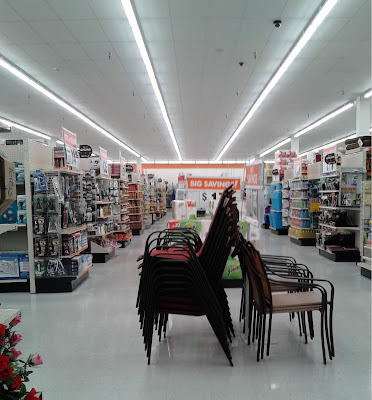 Another look across the center of the store, looking down the aisle that separates food from cleaning supplies, tools, and health and beauty. 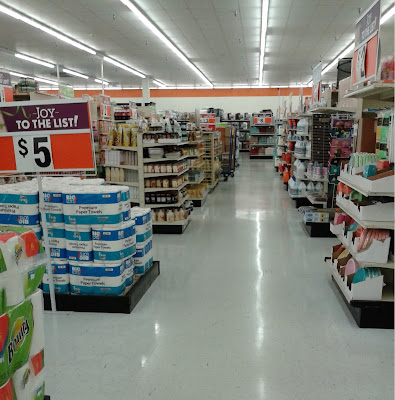 And yet another photo of that center aisle between food and cleaning supplies. 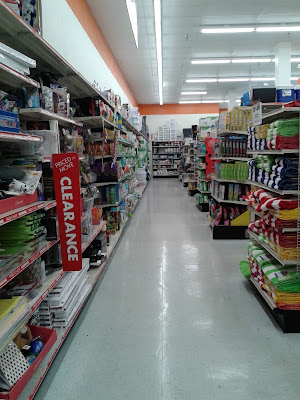 Looking across the right side wall of the store in this photo, toward the front of the building. This is the wall that separates Big Lots from the old Kmart. 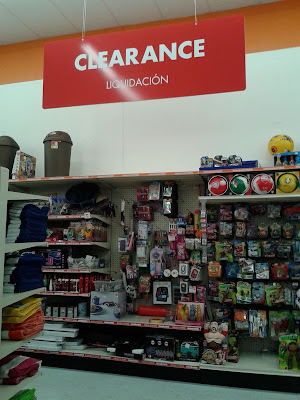 This store had its own special hanging sign for the clearance merchandise, something Big Lots' older signage packages never had. Unlike the other signs in the store, which are orange, the clearance sign is red. 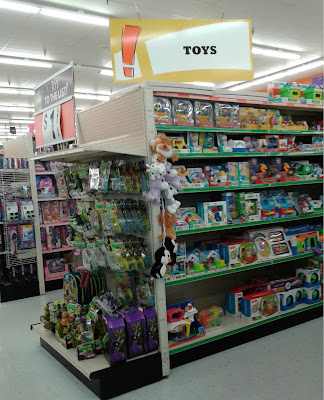 A look at the older style Toy department sign that hung over this department prior to the early 2016 remodel. 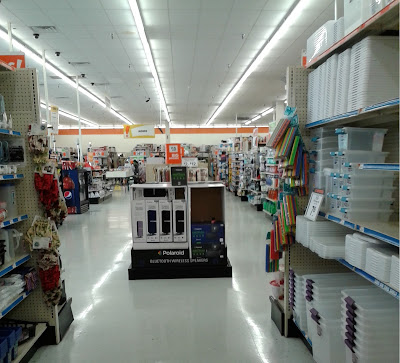 A look across the front of the store, from the right side of the building looking toward the left. 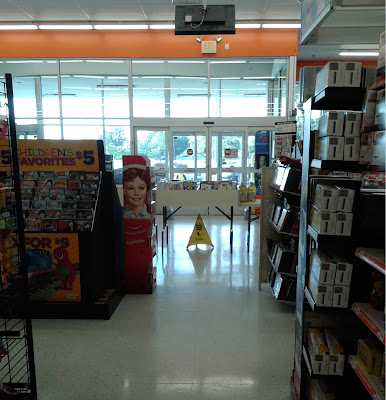 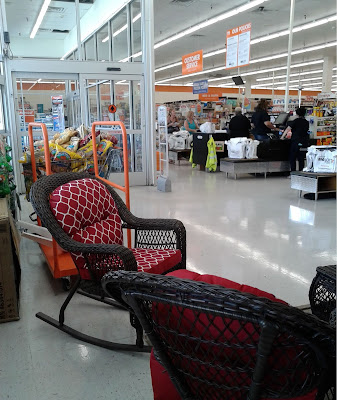 One final interior photo, looking toward the front registers and the exit. Big Lots was using the front right corner of the store for overflow seasonal merchandise, some of which you can see in this photo. 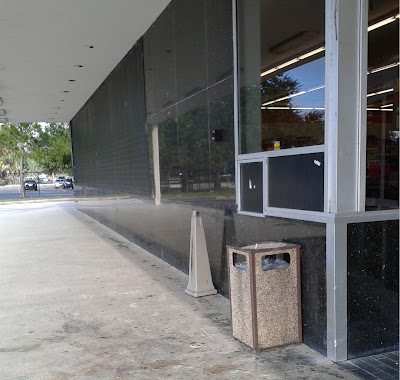 Heading back outside for a few more exterior photos as we wrap up our tour of the Kissimmee Big Lots. This is looking down the left side of the building. Here you can see the covered up holes from the old Publix PRESTO! ATM below the window, and in the distance, a violated tile mural. 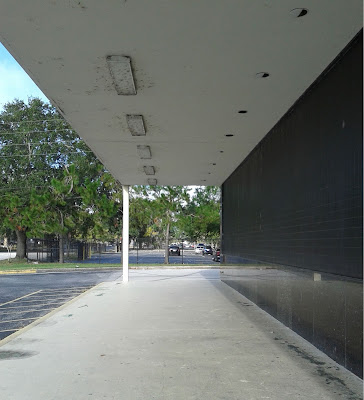 This violated mural was the large one depicting the cornucopia of food and the orange grove. Under that black paint you'd see something like this. In this photo taken from afar, you can see the original mural that was here. 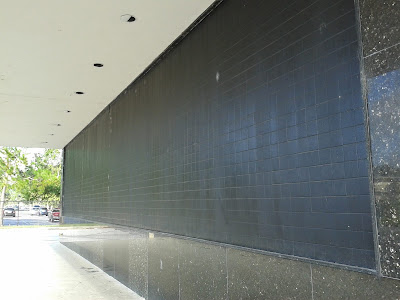 Maybe instead of violating Publix's mural, Big Lots was trying to make an artistic statement of their own here...this is just a new mural they came up with called "Portrait of black cats huddled around a pile of coal in the darkness of an abyss". As Retail Retell caught on, "I'm sure the artist who created this masterpiece appreciates you bringing his creative title out of the dark :P" Yes, the title almost slipped away into the night had I not mentioned it here today! However, styertowne summed up the mural situation quite well, "Pretty pathetic that they could think of nothing better to do with a mural than paint it black. Man! The state of our (collective) public imagination is sad."

So that wraps up our look at the Kissimmee Big Lots. An amazingly preserved 70's Publix on the outside (minus a few murals though), but completely Big Lots inside. Both YonWooRetail2 and styertowne agreed, saying "What a great 1970's-looking store! The porch really reminds me of how Bradlees used to build their stores." and "Couldn't agree more. This building screams the 70's!" respectively. Yes, it's a classic (and great!) vintage design. To the far right of the photo a portion of the former Kissimmee Kmart can be seen, and you can take a full tour of that store by clicking here.