No More Will to Do Good - Former Goodwill (nee-TG&Y), Northgate Plaza, Melbourne, FL

TG&Y was one of many discount stores that once spread across various regions of the United States in the 20th century, offering a dizzying array of cheap goods. A competitor and gatekeeper to Walmart in some areas, TG&Y ultimately became a subsidiary of another five-n-dime, McCrory, who never seemed to have much luck suceeding with the chain. Because of this relationship, with the demise of McCrory Stores Inc in 2001, TG&Y also fell into the annals of history, though this store closed far earlier, sometime in the 1980s or 90s at the latest. 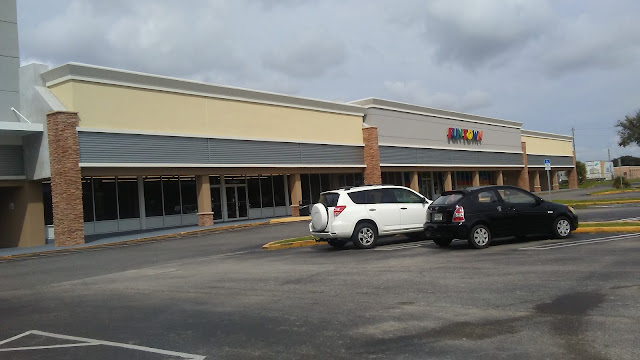 Now, while TG&Y is a very interesting topic, we will have to revisit it another day, as this location retains almost nothing of it's TG&Y heritage. Like the other anchor tenant of Northgate Plaza, Winn-Dixie, TG&Y was quietly subdivided between multiple tenants and recieved heavy exterior and interior facelifts after it's original tenant vacated the space. TG&Y was split unevenly, entertainment center Funtown claiming roughly 2/3 of the space and Goodwill being left to contend with about 1/3 of the structure. Goodwill didn't seem too pleased with this, and in 2016 fled the plaza for a larger store up the road, adding another location to the roster of the many many vacant Goodwills scattered across Brevard County as they flip-flopped locations in the last half decade. 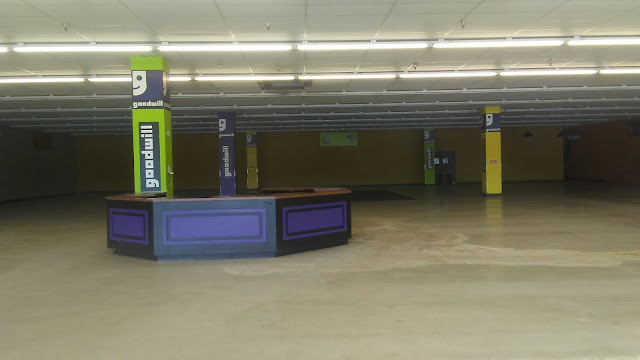 Taking a quick look through the windows, we see that this really was a quite small store. Also highly visible is the fact that Goodwill fled rather quickly, taking almost all of the interior fixtures except the center counter and leaving their logo on every colorful pillar. A small hanging sign also seems to have been left far in the back. 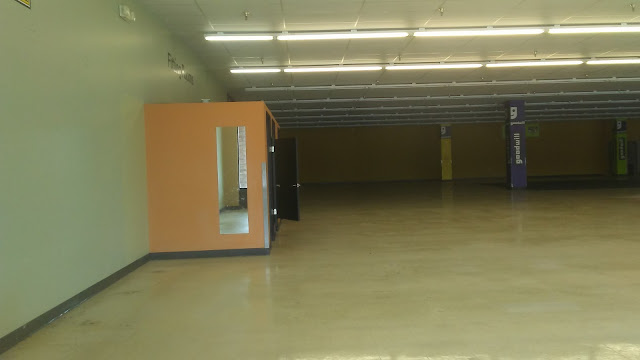 Swinging to the left side of the store, we see the fitting rooms they left behind as well as the corresponding signage above. The mirror confuses me, what was it's purpose? To check how you looked? After you'd left the fitting room...?
Also take note here, oddly enough only a few of the lighting strips have remained on. It was quite early in the day when I took these as well, so these likely blare out into empty space throughout the day. 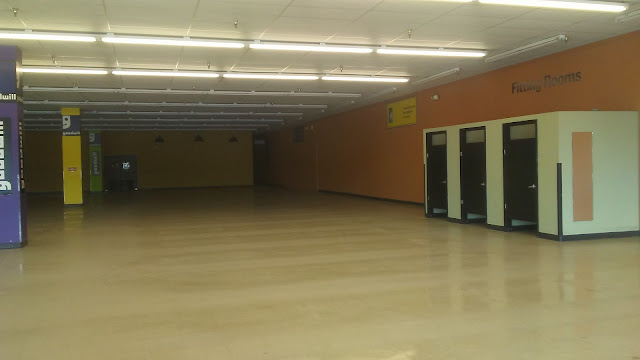 Here we swing to the right side of the store to see the other set of fitting rooms mirrored across the store, down to the signage left on the wall and the oddly placed mirror. They've also left a banner on the wall, which may have been mirrored on the otherside of the room as well, but I can't remember and in my photo the fitting rooms block it.

Unfortunately, this ends my photos of the former Goodwill, nee-TG&Y of Northgate Plaza. However, despite it's heavy remodelling from it's original visage, this will certainly not be the last time we visit Northgate Plaza and it's various pecularities.