We Sold For Less, Merritt Island

The back story here is quite long, but pretty interesting: Walmart first opened their original Merritt Island store here in 1985. However, only 9 years later in 1994, Walmart decided to move to a new (non-super) store further to the east on Route 520. The new location was built on a lot which had much more space for parking, easier access from SR 520, and plenty of room for a Supercenter expansion (which Walmart ultimately added to the new store by 1999). Walmart’s old store didn’t sit empty for long, as it was quickly split into three stores: Books-A-Million #622 on the left, Big Lots #572 in the center, and local appliance chain Appliance Direct took over the space on the right. Books-A-Million didn't last at this location long, deciding to relocate to the empty Woolworth space at the next-door Merritt Square Mall by 2000. Their space sat empty for a short time, until Bealls Outlet (store #635) took over the space. For the next few years, everything seemed to be normal here - that is until the building’s landlord came up with an interesting scheme. Around 2009-2010, the landlord decided not to renew Bealls Outlet's, Big Lots', or Appliance Direct’s leases, forcing all three stores to close without replacement. Why would the landlord do this, you ask? He was trying to win over Kohl’s to get them to open a store in the old Walmart building (at the expense of Bealls Outlet, Big Lots, and Appliance Direct), probably as a way to better enhance the image of the plaza and be able to charge more for rent. Kohl’s was interested for a while, but in 2011, they decided against opening a Merritt Island store, leaving the old Walmart building entirely empty. In late 2013, after giving up all hope of bringing in Kohl’s, the old Bealls Outlet space became a Harbor Freight Tools, and Appliance Direct decided to reopen in their old spot around the same time. Although it sat empty for quite a while, the vacant Big Lots space became home to Appliance Stockade in mid-2018 (although the photos you'll see in this post were taken before Appliance Stockade moved in).
We'll start off today's post with an overview of the front of the old Walmart building. This building was built in one of the two common styles for a mid-80's Walmart, featuring the trapezoidal shaped entryway. While it was a rather unfortunate situation that happened here in the late 2000's with the landlord's greediness, at least this place is filled once again. 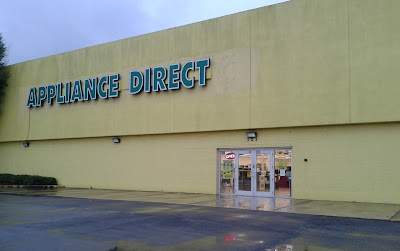 One thing Appliance Direct is pretty famous for in Central Florida is their extremely cheesy and low budget TV commercials, starring the company’s spokesman (as well as founder and owner) Sam, his wife, and occasionally daughter. If you have ten minutes to spare, here’s a link to a compilation of Appliance Direct commercials someone recorded and posted on YouTube (one of Sam’s catchphrases is where I first sentence of this description fron). You’ll get some laughs out of how cheesy most of these commercials are (like l_dawg2000 did, saying "OK, now I know more about appliances than I ever wanted to! Gotta love the velvet cake test and that Lowe's/Home Depot mashup logo! Those prices seem quite reasonable, so I bet they get a lot of business.") 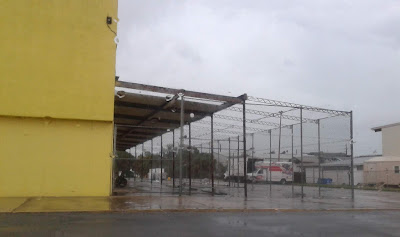 A very poor quality picture of the still intact (but unused) garden center, attached to the right side of the building. 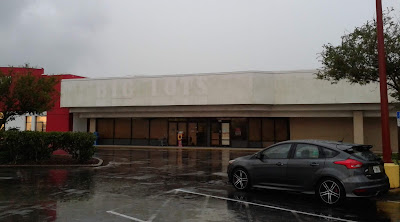 The empty center portion of the building, which was previously home to Big Lots #572. This space sat empty from the time of the Kohl’s debacle around 2009 all the way until 2018, when Appliance Stockade opened here. Walmart’s old awning was still mostly intact as well, except for a small portion of the very left side of it, which Books-A-Million removed in order to build their façade (which Bealls Outlet and Harbor Freight left intact). Although some of the stucco was replaced when Appliance Stockade moved in and the facade repainted, the old Walmart awning still remains in-tact today.

It was a bit of a gloomy day when I came to take these pictures, but it sure added to gloominess of this building! Retail Retell agreed: "The dreary, rainy day adds to the effect!" 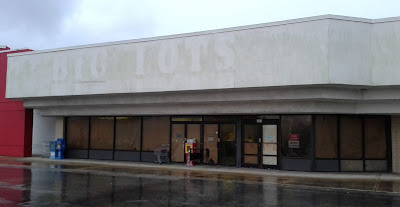 Closeup of Walmart's and Big Lot's old entryway. When this was Walmart, I think there might have been a few more sets of doors than what you see now, which Big Lots closed in. 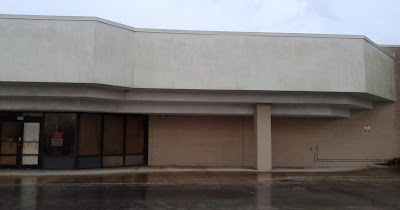 The right side portion of the old Walmart awning can be seen here. 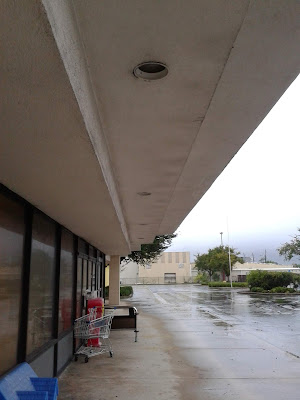 Under the awning we go, looking across the front walkway toward the front doors. 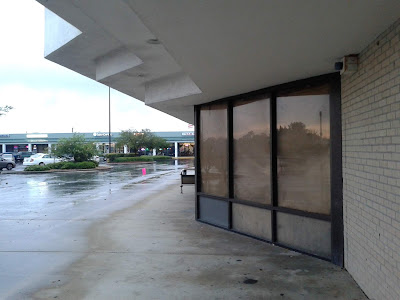 The right side of the entry vestibule. andsome96 said, "I like that diagonal window. There is a Walmart like this in Orlando (on Semoran Blvd) that still has this exterior, with updated signage of course." 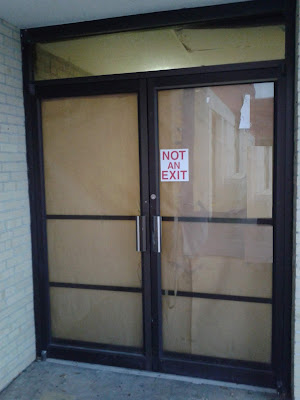 This set of doors was a side entrance into Walmart, which Big Lots didn't use. 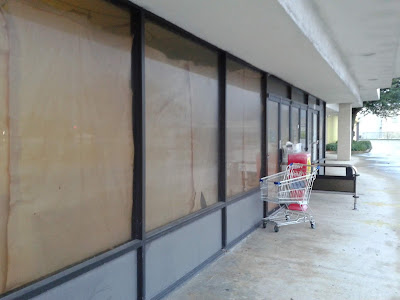 Much of the entryway's front windows were papered over, however I wasn't completely out of luck here! As we'll see in a moment, I was able to get a few photos of the interior of the empty Big Lots space where some paper had fallen off. 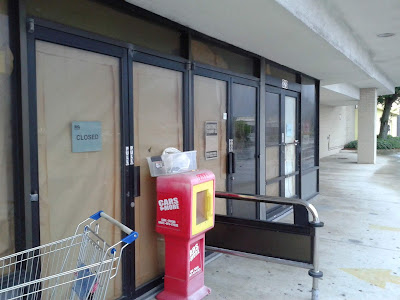 The entry doors into Big Lot's old space, which also served as the main entrance into the old Walmart. 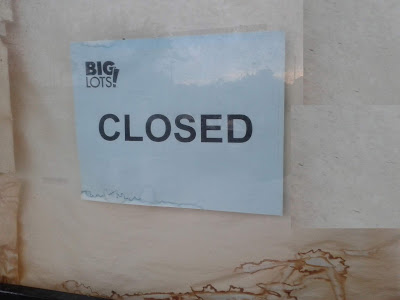 A message from Big Lots about this store's fate, simply stated and to the point. 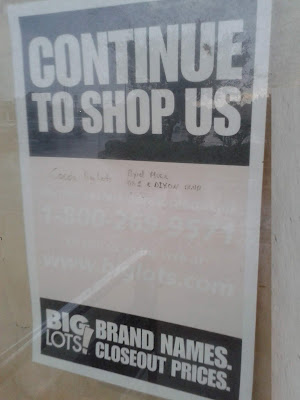 This old faded sign shows just how long Big Lots has been closed for. The "Brand Names. Closeout Prices" slogan has been retired for a few years now. (I think their current slogan is "Serve Big. Save Lots", but they change their slogan so often now I can never keep track of it anymore). It's kind of hard to see, but the sign directs shoppers to go to the Cocoa location on the other side of the Indian River on Route 1, about 4 miles away. 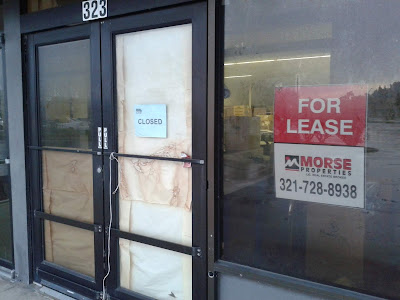 The paper covering the windows here either fell off or was removed from the glass on this side of the vestibule, providing me with my opportunity for some interior photos... 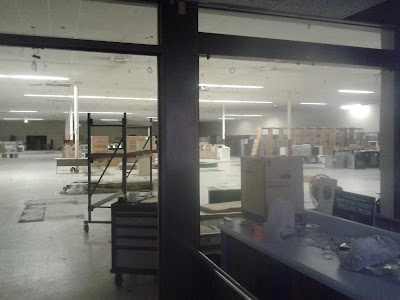 With the removed paper, we can now have our quick look inside the abandoned Big Lots portion of this former Walmart. The inside still feels quite a bit like Walmart too. From these pictures, it looks like Appliance Direct used this place for overstock storage while this space was sitting empty, along with someone (probably Appliance Direct as well) storing some other random things in here as well. 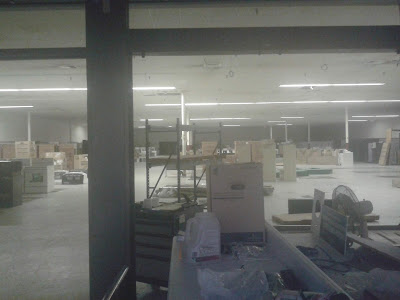 What looks like pieces of a counter are currently blocking where the main entrance door is. There was originally second set of doors in here, which were still present when Big Lots was here. Since the time Big Lots left, someone removed the doors from the hinges (and the door frame was left in-tact). 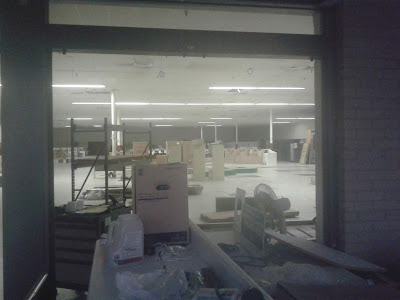 In case you were wondering, that haze you see in all of these pictures was from all the years of dirt and gunk that had built up on the glass. 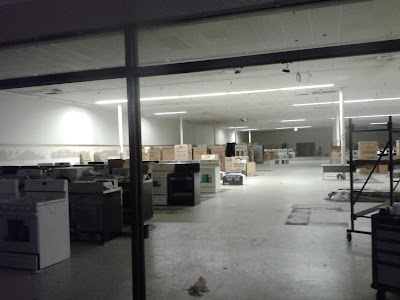 Looking into the left side of the store, which was filled with rows of (overstock?, clearance?, broken???) appliances. When this store was a Big Lots, the Home department was located along this wall. In addition to that, I remember food being in a weird spot in the front right corner of the store next to the registers, and toys being in the center of the store. However, that's all I can recall from my few times in here a long time ago. 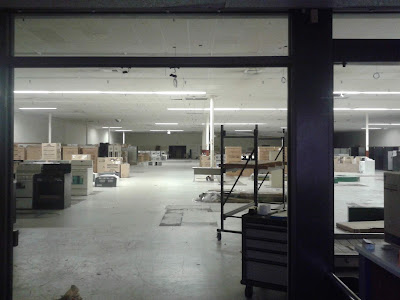 One final look inside before we say goodbye to the former Merritt Island Walmart/Big Lots/almost Kohl's. Much like the exterior, Appliance Stockade did practically nothing to the interior when they moved in, not even bothering to remove the scars from Big Lots' old shelves either! Certainly some low-budget remodeling at its finest!