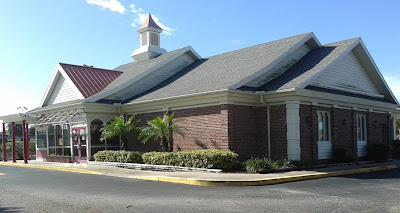 You won't be getting any ice cream here! For this My Florida Retail post, we're going to take a look at an abandoned restaurant which has been sitting empty for a little over 7 years now. This former Friendly's sits on an outparcel of a former Walmart that relocated to a new Supercenter in 1994 (which is now offices for Northrup Grumman, and has been stripped of all interesting Walmart features in case you were wondering). The abandoned Friendly's is also the neighbor to Brevard County's only remaining Hardee's restaurant too. I've always liked how the colonial style architecture stood out from all the other boring restaurant buildings in the area, as architecture like this is not very commonplace in Florida (and as Raymie Humbert described it, "From this angle it looks like an LDS meetinghouse..."). This part of town has become a death sentence for most restaurant chains over the years, and is only a few blocks from Palm Bay's restaurant death row (featured on my flickr page quite a long time ago now! Start at the link provided and go through the "Chinese Checkers" to look at some of the interesting abandoned and repurposed restaurants that once lined Palm Bay Road). As far as sit down restaurants go, this place was pretty isolated from any others in the area, so I guess its death was inevitable (especially as a location of a chain that's had some recent financial troubles). However, it was interesting exploring this place, and I got some really good photos to share with you in this post! 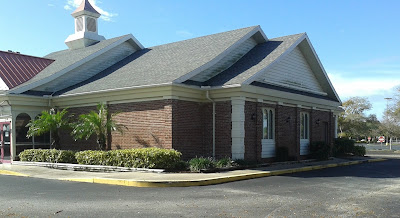 We'll continue our tour of this abandoned restaurant by moving onto the right side of the building, which housed the dining area. Someone is still taking care of this place too. The plants and shrubbery are still neatly trimmed and maintained and there wasn't much garbage strewn around, unlike some other abandoned places I've been to. 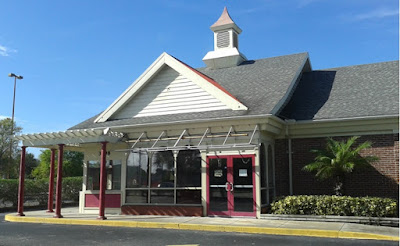 Moving back up front, here's a photo of the front of the building and the entryway. It looks like there was once an awning above the door that must have blown away in a storm, since only a metal frame remains. I also like the little cupola on the roof. It reminds me of something you would see on an old Centennial A&P, although in these parts, a cupola is nothing more than a fancy lightening rod! 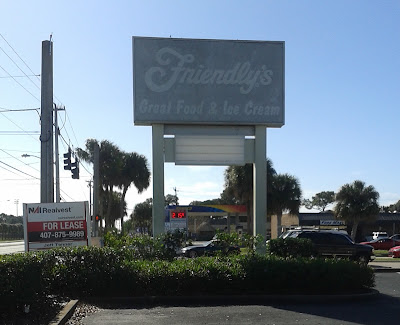 The poorly whited out road sign, which is still clearly readable as you drive by on Babcock St. 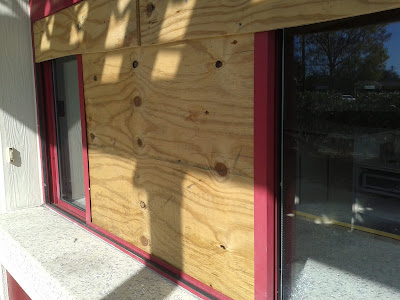 Someone smashed in the walk up ice cream window on the left side of the building, leaving this board to cover the hole. The inside of this place had lots of smashed glass all over (which you'll see when I start posting the interior photos), but this was the only boarded-up window present, so this damage must have been recent. 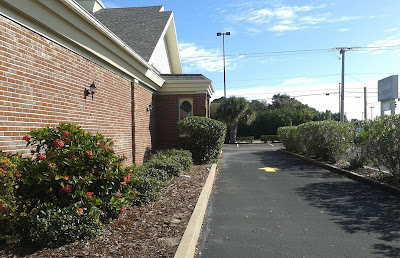 The left side of the building. The way this side of the building was designed gives you the impression that there was supposed to be a drive thru here, but I'm pretty sure there never was. The walk-up ice cream window was behind that part of the building with the window that sticks out in the background, but unless you had unusually long arms, there's no way you could reach it from your car! 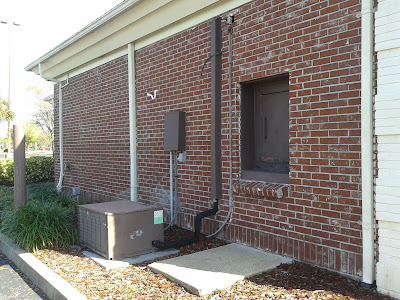 Some of the equipment on the back of the building. As l_dawg2000 said, "I can't believe scrappers haven't swiped that condenser unit. It wouldn't have lasted more than a week after the place closed in most of the 'hoods of Memphis!" I actually thought the same thing when I was here. There's a notorious homeless camp across the road from this restaurant, and a scrapyard less than a mile away, so all of this equipment could have made for an easy snatch for someone. 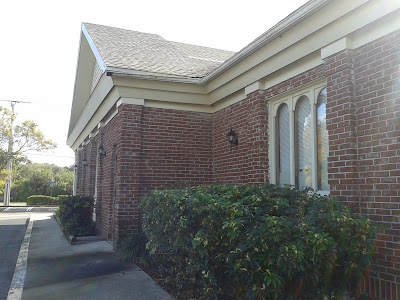 The walkway on the right side of the building is pictured here. 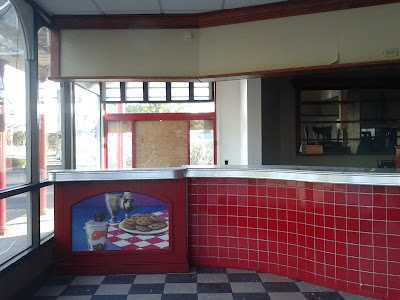 Now for some interior photos from this Friendly's, home of the not-so-happy ending sundae. This is the ice cream bar that you see to your left as you would first walk in. This area was set up like an old school ice cream parlor, with stools along the counter where you could sit and order your ice cream if you didn't want a full meal. And as I keep staring at that picture of cookies and ice cream as I type this, it's really making me want some right now! 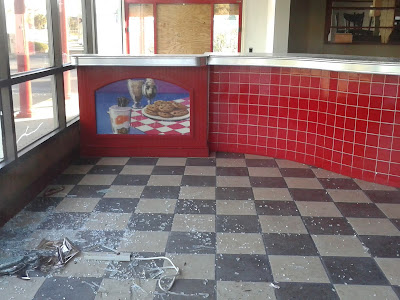 Pictured here is a similar scene as the previous photo, however this one shows all the smashed glass on the floor from previous attempts to break in. I wonder if that random power strip was the object used to smash in the window. If you held it by the cord and really whipped it hard enough a few times you just might generate enough force to smash the glass (although I'm not suggesting that anybody go and try this!). 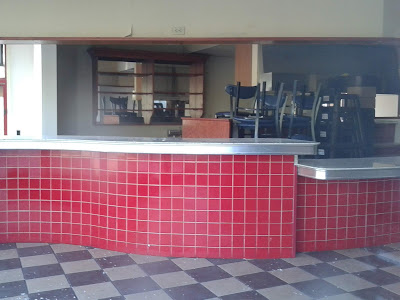 Looking further down the ice cream bar, we see that all of the fixtures are still in here. Most of the fixtures, however, got piled up behind the counter in a giant heap, which you can see here. 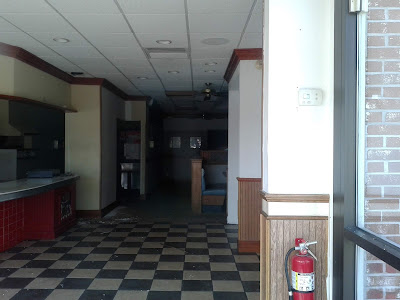 This is the view looking through the front door and into the dining area. Everything is still intact in here, including the Coke machine still in place at the entry to the kitchen. All that's missing are a few customers and some food! 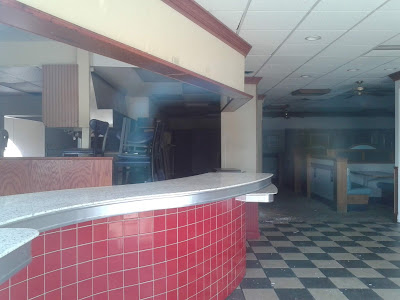 Another view into the dining room, and also a glimpse back into the kitchen. 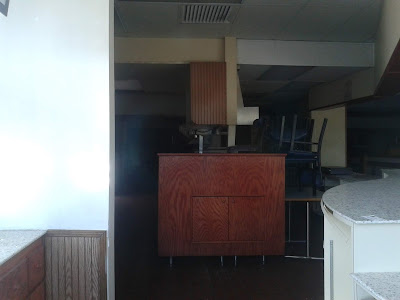 From this viewpoint, we are looking from behind the ice cream bar and into the kitchen, which is now more furniture storage. 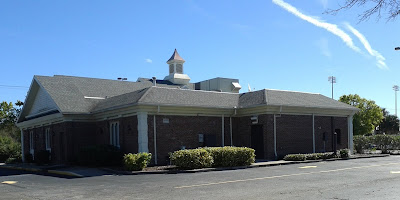 Returning outside for a view of the back and the side of the restaurant. 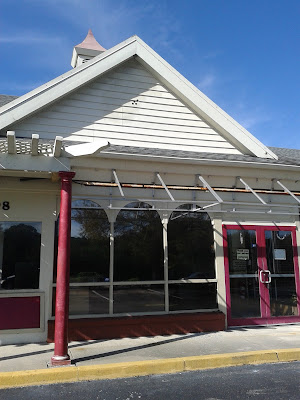 Here's a closeup of the front of the building. If you look closely at the white peaked roofline, you can still see the labelscar left from Friendly's script/curly (I don't know what to call it) F logo. 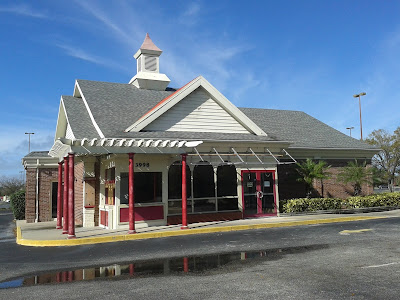 And one final front view to wrap up my photos of the former Melbourne Friendly's. I just like all of the odd architectural features of this place. It'll be interesting to see if anything will ever move into this place and if they'll modify it any, because this place will definitely make for an interesting conversion if left mostly intact.