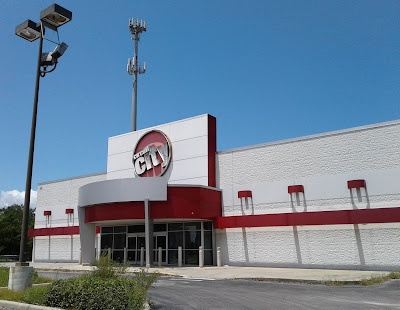 This Circuit City store opened in 2000, featuring a new store prototype and design for the company. This location lasted until the chain’s demise in 2009. Other than serving as a Halloween pop-up store every fall, this building sat empty on this busy stretch of SR 520 for a good number of years. After a plan to convert this building into a call center fell through in 2016, this building would eventually be converted into offices for Physician Partners of America in Summer 2018.

Here in Brevard County, this long abandoned Circuit City store gained a bit of fame in the retail community over the years. Not only was it abandoned for a long time, but this building retained all of its original Circuit City signage and design elements for 9 years after that chain’s demise! As cool as this place was, all good things must come to an end. After 9 years of abandonment and one failed attempt at bringing new life to this place in 2016, Physician Partners of America announced they would be taking over this building for a new medical pavilion. Physician Partners changed some of the exterior of this building (and presumably gutted the interior), although you can still see the old Circuit City design even after the recent modifications. You can click here to read an article about the new Physician Partners office, and that article has a photo of what this building looks like now. As Retail Retell said about the remodeled building seen at that link: "Pretty interesting that the new tenant didn't change the façade too awful much - namely, I'm surprised that they left the round portico area." 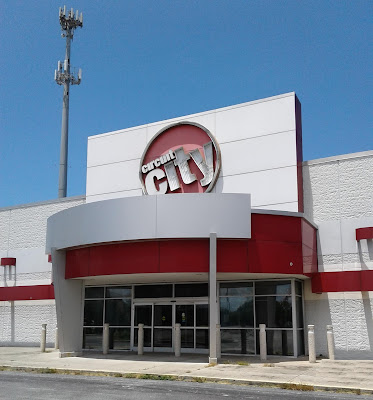 However, with this post, we’ll be focusing on what was here rather than what is here now. I visited this store a little over a year ago, and I’m lucky I got here when I did after procrastinating on getting photos of this old Circuit City for so long. Although a bit faded and battered, the old Circuit City sign looked over Merritt Island for 9 years after the chain went bankrupt. While there are plenty of repurposed Circuit City stores floating around Central Florida and the Treasure Coast either abandoned or repurposed, this was the only former Circuit City store I knew of in the area with all the original signs still up. 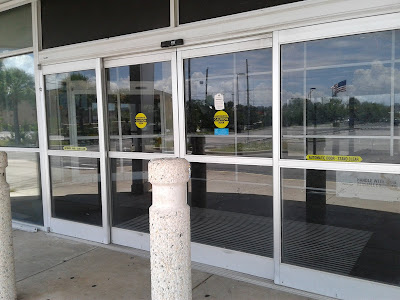 The front doors of the former Circuit City store, locked up tight for much of the last decade. 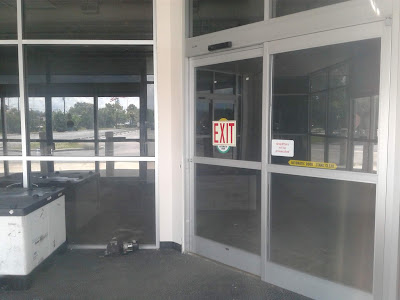 Peeking through the front doors, here we have the store’s front vestibule. Due to the glare on the interior windows, I wasn’t able to get a good view into the rest of the building. From what I’ve been told by others, Circuit City stripped the interior of any old décor or signs after they closed, so the interior was completely empty. However, if you’d like a feel of what the interior of this place looked like back in the day, cflretail has a scan of a map of this store’s original layout on his photostream, which you can view by clicking here. That map was actually taped to the glass of the front window, but all my photos of that map came out horribly glared. At least someone out there got a good photo of it! 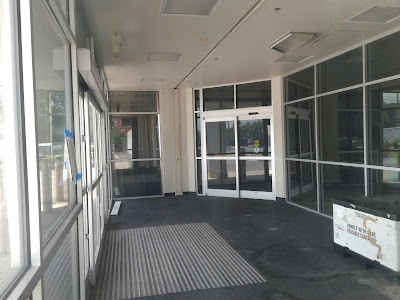 Here’s a look across the entirety of the vestibule, as seen from one of the side windows. 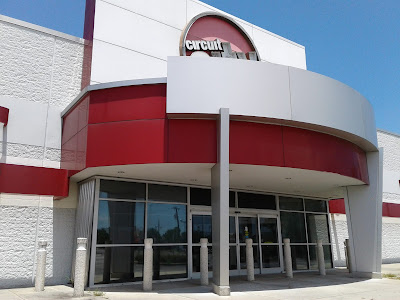 Since I couldn’t get any decent pictures of the inside of this place, why not take a few steps back from the entrance and get some more exterior shots? While part of the sign is cut off, here’s a close-up of the store’s entryway and the awning that covers it. 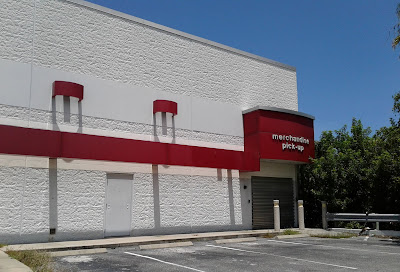 The front right corner of this building was home to Circuit City’s merchandise pickup door, which unlike the main entrance, was covered with hurricane shutters. 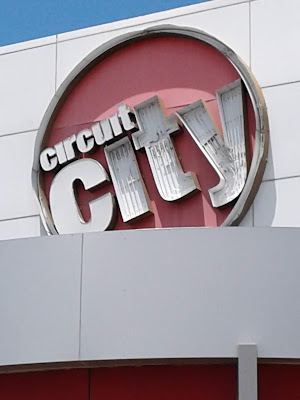 Here’s a zoomed in look at the Circuit City sign on the front of the building. 9 years after the chain’s demise, finding one of these signs is getting pretty rare, although I think a few more are still floating around out there in other parts of the country. As YonWooRetail2 said, "[Hurricane] Matthew probably took the front part of "ity" lettering away. This is still neat that this place lasted with all the signage for as long as it did!" 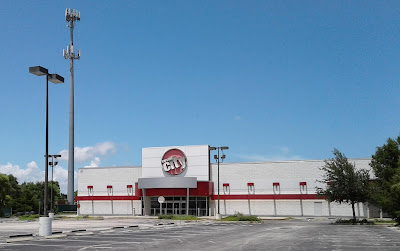 Here’s an overview of the entire building, even though the merchandise pickup door is blocked by some trees. It’s early 2000’s Circuit City as its finest. 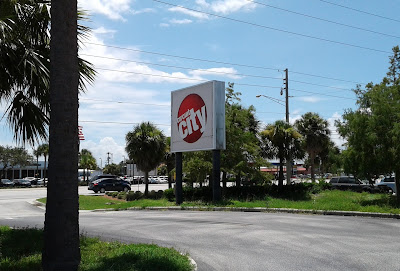 Lastly from the Merritt Island Circuit City, here’s a photo of the large road sign that faced SR 520, which also remained completely in-tact with the Circuit City logo until early 2018. With this photo, we’ll wrap up our short look at the Merritt Island Circuit City. Even though you can still see some of the old Circuit City design after the medical center’s renovations, this place certainly isn’t as exciting as it once was anymore. But, it is one less empty space on Merritt Island, which has been having a pretty good track record of filling some long empty vacancies of late. For instance, the abandoned Sports Authority in Merritt Square Mall became the area’s first Ollie’s Bargain Outlet on October 17, 2018, the empty Publix strip behind the mall, mostly vacant since 2002, is on track to become a U-Haul Storage Center, and the former Big Lots recently found a new tenant in Appliance Stockade (who apparently took inspiration for their commercials from our other local king of cheesy commercials, Appliance Direct, which duckman66 does a good impression of: ""White Porcelain" "Wasting laundry money is Wakkie Nu Nu!" "Plus... (slaps delivery truck) Same day delivery!" "Appliance Direct!" Permanently etched into my brain after viewing one too many AD infomercials on CW-18 when I lived in the Orlando area."). I guess it’s a new day or sorts in Merritt Island with all of these abandoned places finding new tenants after so long.

Anyway, that’s all I have for this former Circuit City. Until the next post,