This Publix store opened 1986, presumably as a relocation of the Searstown Mall Publix store. Publix remained at this location for just shy of 30 years, at which time they relocated to store #1421. Store #1421 opened in February 2015 and is located a mile to the south of this former location in the Colonial Coast Crossing shopping center (located at the intersection of SR 50 and Barna Ave.). In 2017, Legacy Charter School announced they would be opening in the old Publix building. The school opened in August 2017, although it has faced some controversy from the Brevard County School Board since its opening due to their operation standards.

Yes everyone, Publix has left the building. For the subject of this My Florida Retail post, we will be taking a look at this abandoned Publix in Titusville. At the time I took these pictures way back when, this store had only been sitting abandoned for 6 months. I had assumed this place would be sitting empty for a while, as this store wasn't built in the greatest location to begin with. It was built in the middle of a residential neighborhood with very little other retail around it, so it's not a very attractive location for most retailers. When Publix got their opportunity to relocate to the new store on busy SR 50, one of the main East-West routes in Titusville, they took full advantage of getting the better location with better visibility. It's really no surprise that a school would ultimately be the new tenant to take over this space, as that type of reuse fits in with the mostly residential nature of the area in which this plaza was built. I'm surprised that after only two years of abandonment the landlord was able to find a new tenant, as the abandoned Florida Choice up the street waited 20 years to find itself a new tenant! Anyway, at the end of this post we will take a very quick look at the new Publix store (which really isn't anything special), but let's take this time to get a much better look at the (much more interesting) old store... 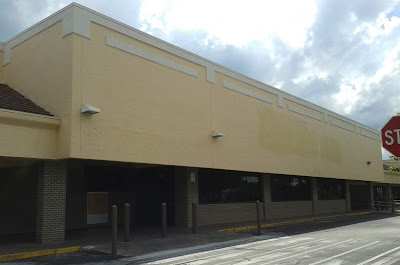 This store was a fairly average late 1980's style Publix in just about every way. One of the typical exterior traits of this style store was the single glass vestibule with entrances on either side. This Publix also never had a pharmacy department in store, as those didn't make their debut until the year after this store opened. The replacement store does have a pharmacy department, the addition of which possibly played a role in this store's relocation too (as Publix has a very profitable pharmacy operation that is constantly expanding). 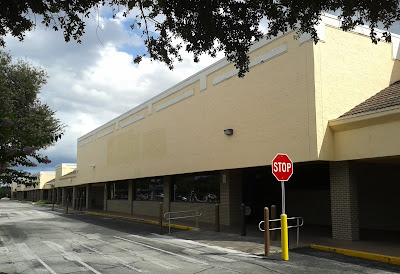 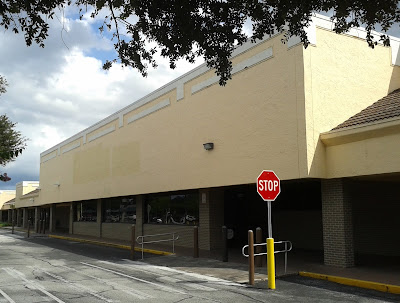 Turning the camera a bit more to the right, here we have a closer look at only the Publix building from this angle. 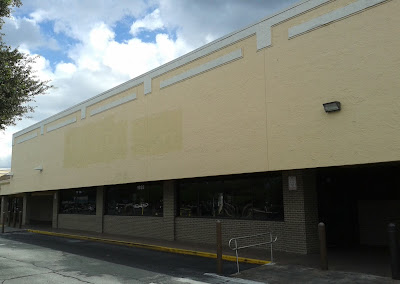 The labelscar blotch to the left was where the Publix logo once was, and the blotch to the right said "SUPER MARKET" (with the word super above the word market). This old FourSquare photo shows this place when it was still open to better visualize the old signage. Oddly enough, even though this store closed almost 4 years ago now, it still pops up on Publix's store locator with a full description of store amenities too. Just don't expect to find any of those services here now, as the only food you'll find in this place today is in the school cafeteria (and I'm sure none of you want to eat school cafeteria food!). 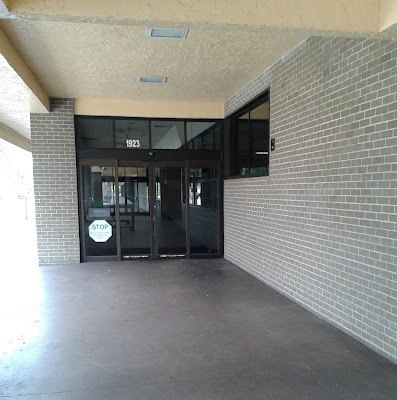 Stepping onto the front sidewalk, here we have a view toward the right side of the entry vestibule. 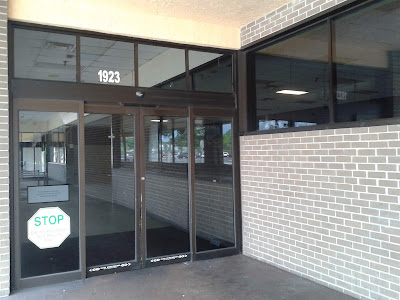 Close-up of the old right side entry doors. While intimidating looking, that stop sign decal on the glass actually reads "STOP - Did you remember your reusable grocery bags today?" (Everything under the STOP part got glared out for some reason). I don't recall seeing this decal at any other Publix stores I've been to. 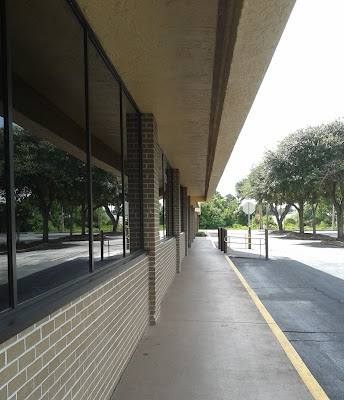 Standing in front of the entry vestibule (which is behind those windows to my left), here's a look down the front sidewalk in the direction of the right side of the plaza. 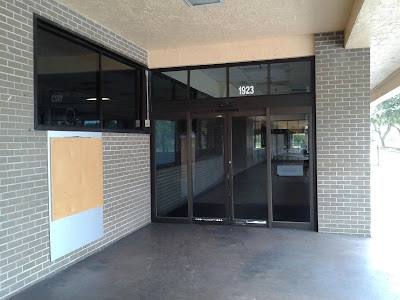 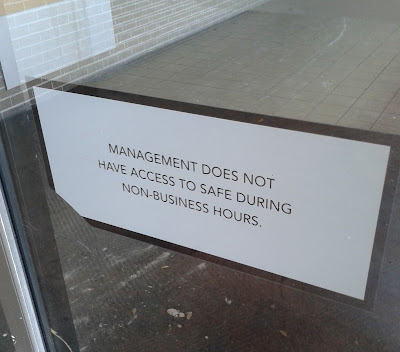 A closeup of one of the window decals that Publix left behind. 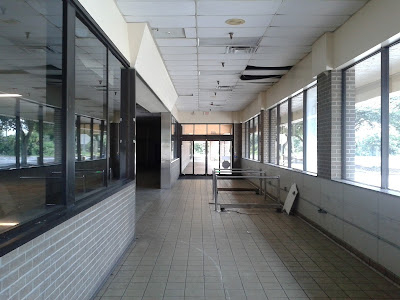 Looking through the door and into the vestibule. This is the typical entryway design for one of these 80's Publix stores (the single hallway surrounded by windows). Many older Publix stores from the 70's and early 80's were also remodeled to have vestibules similar to this one. 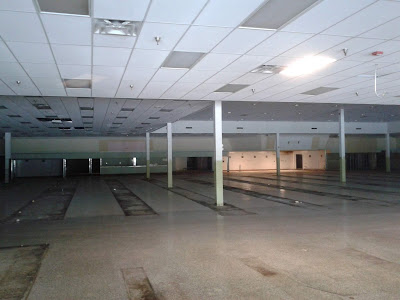 Our first peek inside, as seen from pressing the camera against the glass of the vestibule windows. This view looks across most of the center portion of the store. The Meat and Seafood department was located along the back wall to the very left in this picture, with the Deli located to the right of that in the space where the wall projects out. This is the typical late 80's Publix layout. As for the old decor in here, the lighter pastel color remnants seem to suggest Classy Market 1.0 (as Classy Market 2.0 used a darker color scheme than this). While rolled out around 2004, Classy Market 1.0 is now essentially extinct from Publix's current fleet of operating stores. Heck, even 2008's Classy Market 2.0 is nearly extinct now that I think about it, and 2011/2012's Classy Market 2.5 is gradually getting phased out on its way to extinction as well! But that's Publix for you! 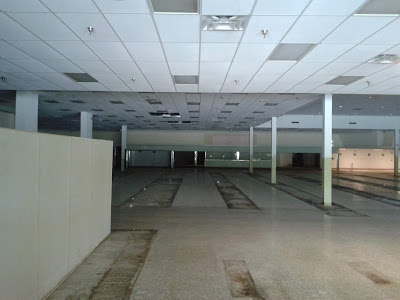 Continuing along with out interior photos of this former Publix, this one is looks straight back toward the former meat department and seafood counter. On the other side of that wall to the left was the bakery. Frozen foods were also off to the left. 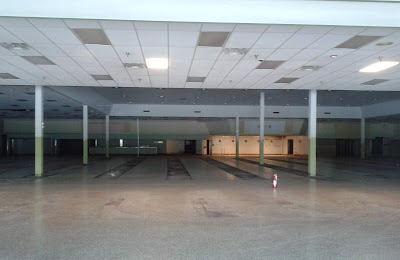 Another look into the back of the store toward the deli. You can also see in this picture where the ceiling raises up over the grocery department, another typical trait in 70's to early 90's Publix stores. 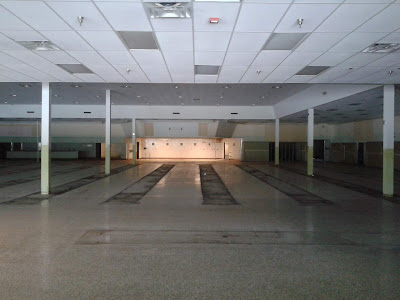 This photo looks straight back into the old deli department. 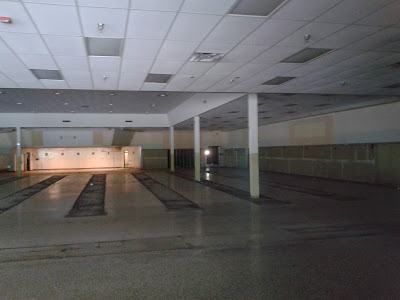 The dairy department ran along the right side wall, with the old customer service desk and restrooms just out of frame from the right edge of this photo. 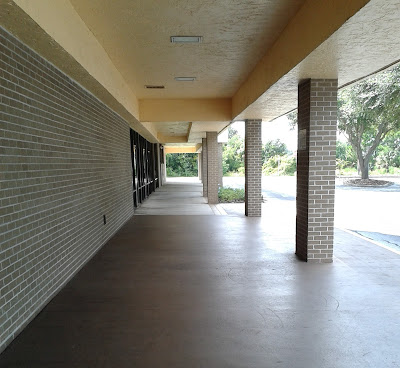 Returning outside, this photo looks down the walkway leading from Publix's right side entrance to the rightmost portion of the plaza. At the far right end of the plaza is an interesting abandoned storefront that held an obscure place in Florida's retail history. If that's the case, then let's walk down there and learn more about that!... 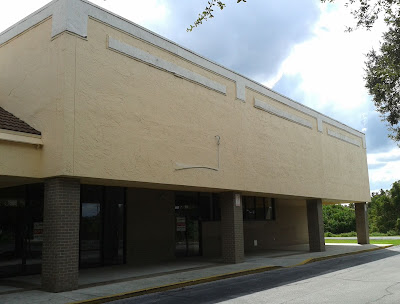 Rite Aid opened at this location in 1986 with the rest of the Royal Oaks Plaza. More than likely, this location closed with the rest of the Florida Rite Aid stores in 1995. After Rite Aid closed, this space became home to a Family Dollar store, which lasted into the late 2000's. Most recently something called Bella's Marketplace was in this space, but that has since closed as well. The old Rite Aid space still sits vacant as of late 2018.

While there are many vacant and repurposed strip mall drug store spaces out there, this one happens to hold a little bit of significance. This is one of the few ground-up built Rite Aid stores to have opened in Florida, this one opening shortly after Rite Aid entered Florida too. In 1986, Rite Aid bought Kroger's SupeRx Drug stores in Florida and a few other Southeastern states. As for Florida, Rite Aid kept their presence limited mostly to those old SupeRx stores, although a few new build strip mall Rite Aids were added during that chain's short tenure in Florida (mostly paired in strip centers with a Food Lion anchor). Back in the late 80's and early 90's, Rite Aid's small Florida presence didn't stand a chance to the long established presence from Walgreens and Eckerd, who easily crushed Rite Aid and caused them to pull out of Florida entirely in 1995. 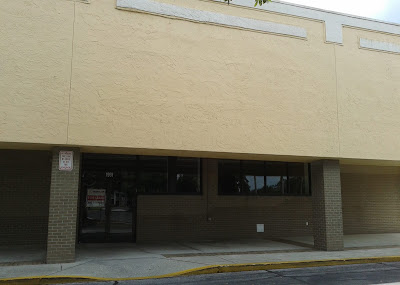 Here's a closeup of the old Rite Aid's exterior. 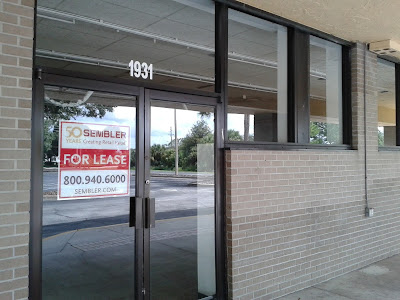 The entryway is set up exactly like a typical older strip mall Rite Aid you'd find up north, with the single set of double doors and a few windows off to the side of the door. 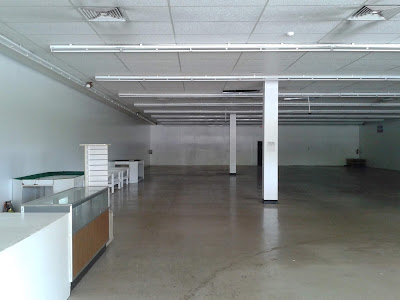 Peeking inside the old Rite Aid, it looks fairly original in here. The random fixtures you see are probably from Bella's Marketplace, although I'm not exactly sure what that was. I want to say it was a small thrift store/flea market type establishment based on those random display cases left behind. 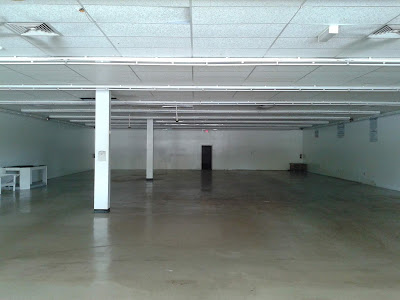 A more centered look into the former Rite Aid space. The back wall would have been home to the pharmacy counter, but Family Dollar covered that up before they moved in. The fluorescent strip lights are what really strike me as an original fixture to this place.

So that concludes our look at the original Publix store and its neighboring former Rite Aid. If you're interested, this website has some pictures of what the old Publix building looks like now as Legacy Academy Charter School. The building was completely gutted inside (as would be expected for such a renovation), however the exterior appears to have been kept mostly original. With our look at the old Publix now out of the way, let's head down the road for a very quick look at the new store:

Publix #1421 opened in February 2015, replacing store #298 about a mile to the north in the Royal Oaks Plaza. This store had been in the works since 2011 according to news articles, but construction was delayed slightly due to a wetland mitigation issue. This property was originally the proposed site for a Food Lion store (#958) back in the early 1990's, but that Food Lion project never came to fruition.

To wrap up this post on former Publix #298, we will finish off with a small set of photos from the store that replaced it. I was in this store for no more than three minutes (I had a lot of other, more exciting places to photograph this evening, and a modern Publix certainly was not on my priority list), so my tour of this store won't be very comprehensive or elaborate like I'm accustomed to do. 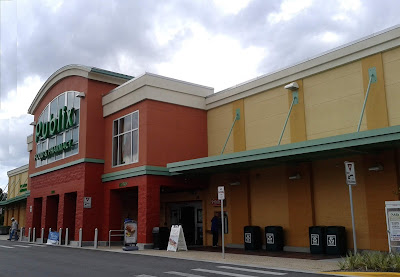 This exterior design has been used by Publix ever since the dawn of the Classy Market era around 2004. Publix will do custom exterior designs depending on the area or the shopping center, however this is essentially the default modern Publix design (therefore making this store even less interesting). 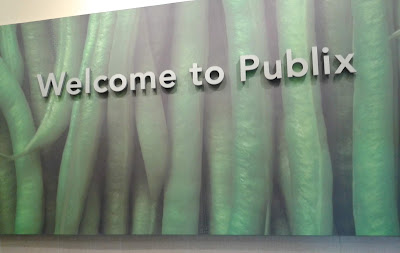 The welcome sign directly inside the front door. The background is supposed to be green beans. 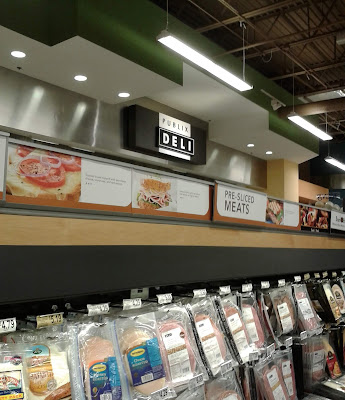 A horrible picture of the deli department. The deli is located on the right side of the store, between the bakery and produce departments like you'd seen in most average Publix stores. This store uses the 45M prototype, which is the most common for a modern Publix (and can be seen in more detail here). Also in this store was the Classy Market 3.0 interior, which just about every Publix store seems to have these days. 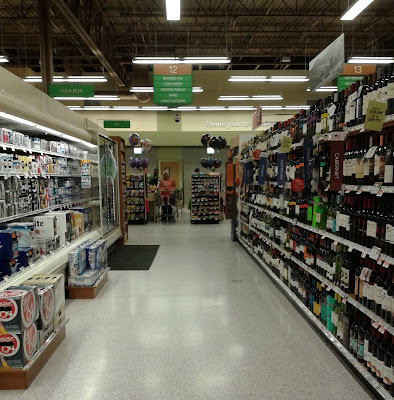 One of the grocery aisles. Coincidentally, it just so happens to be Retail Retell's favorite aisle, aisle 12. 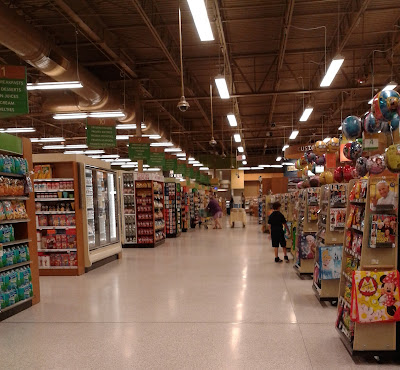 Looking across the front end in my final photo from Publix #1421. As andsome96 noted, "The painted ceiling is a nice touch. The last time Publix tried that out was in some of the stores they built in the early 2000s, in which the ductwork was painted mint green."

Like I said before, I wasn't in here long, so six photos was all I got of this place. There's always a chance I could come back here for more photos, but I have photosets from about 3 or 4 other Publix stores that are essentially exact copies of this one, so I'm not in any rush to get back here anytime soon!