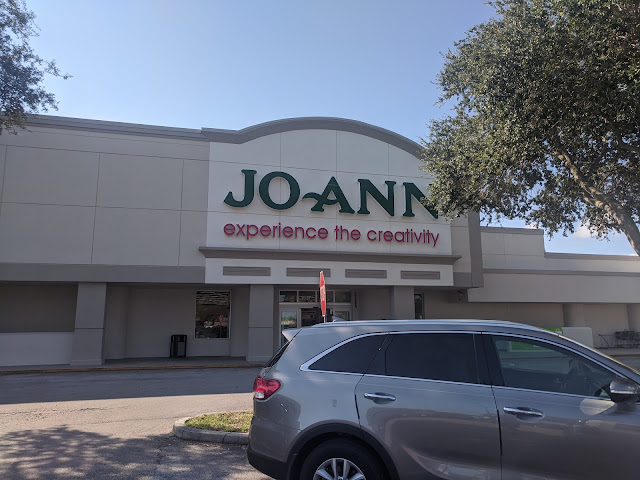 Boy am I glad Blogger doesn't have a title character limit.

This Jo-Ann's has a very interesting history, tracing back to January 1985, when it opened as the then-largest SupeRx Food & Drug store.

The store's exact opening date was January 27th, 1985, however like many later SupeRx stores, it didn't carry the banner long. 1986 would see it converted to the also short-lived Florida Choice banner, before 1988 brought that chain's collapse.
It wouldn't sit vacant for long however, as it would reopen as Phar-Mor on (or by, the ad's a little confusingly worded) December 7th, 1988.
Phar-Mor and it's power-buying would only buy it about 7 years however, as the West Melbourne location would close it's doors in 1995 as Phar-Mor went down in flames in bankruptcy court.
Books-A-Million rolled in quickly, on the heels of the chain's first Brevard location in Merritt Island, opening in early December 1995 with a grand opening on December 7th.
The book was closed on Books-A-Million around the turn of the millennium, as it disappears from newspapers in 2000 and is next mentioned as a former location in 2002. There's no clear indicator as to what directly killed this BAM, though I suspect the opening of a new 30,000 sq ft Barnes & Noble farther along New Haven in 1996 didn't help, a store more than double the size of BAM's previous area competition, a 12,000 sq ft Bookstop.
Regardless, 1537 W New Haven would move onto the next chapter of it's life (Okay, I've gotten the book puns out of my system) in 2002, when Stevens Furniture would open an Ashley Furniture Homestore in the spot, opening first as a temporary liquidation center on March 23rd, 2002 and later as a full line store on June 29, 2002.
As an aside, I have a feeling that this plaza was in a bit of a slump at the turn of the millennium. It suffered a 1-2 punch, losing both Books-A-Million and Service Merchandise, with the sign from the latter still being up by mid 2002. Thankfully, the plaza was able to pull itself back out of the slump.
Ashley Furniture wouldn't last long though, and I believe they were gone by late 2004 when Ashley opened up a bigger and better showroom at 4360 W New Haven on October 15, 2004. It would take a few years for Jo-Anns to show up, opening by Summer 2007. Certainly not a great time for new stores to open, but this one managed to hold on! Speaking of holding on, thank you for bearing with the history of this location. Onto my recent photos! 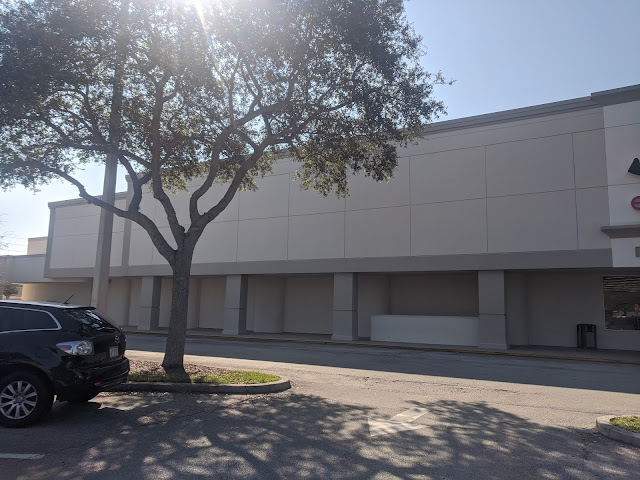 Jo-Ann's entrance is offset to the right, and the rest of the facade is pretty bland. 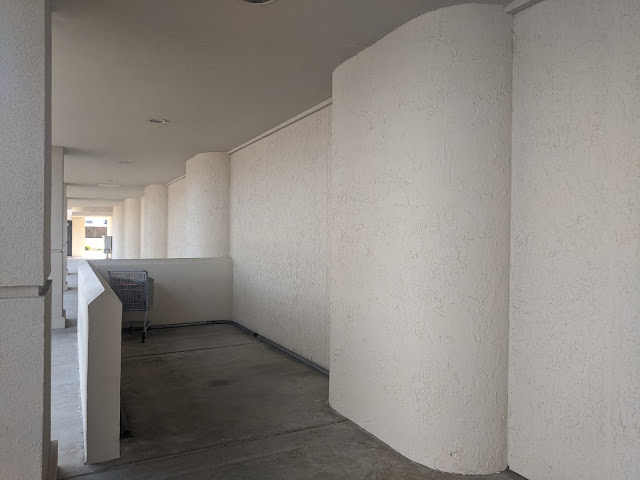 One of the biggest SupeRx remants is visible here- the facade! Despite a revolving door of tenants and a new upper facade, SupeRx's old school rounded, wide pylons are still plainly visible here. If I had to guess, this cart corral is also a holdover from a previous tenant, as Jo-Ann's doesn't make much use of it. It looks like it's designed for bigger carts than what Jo-Ann's has, and Jo-Ann also has a smaller indoor corral that seems to take care of their needs. 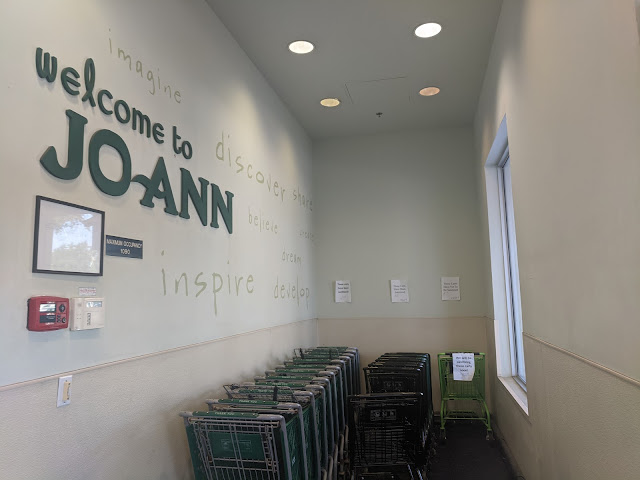 With the exterior covered- Welcome to Jo-Anns! Here's that indoor corral I was talking about, split between the store's 3 varieties of carts, oldest, new, and newest from left to right. The plastic carts likely date from the store's opening, whereas the lime green metal carts look almost brand new. It's interesting to see them all in use at once. 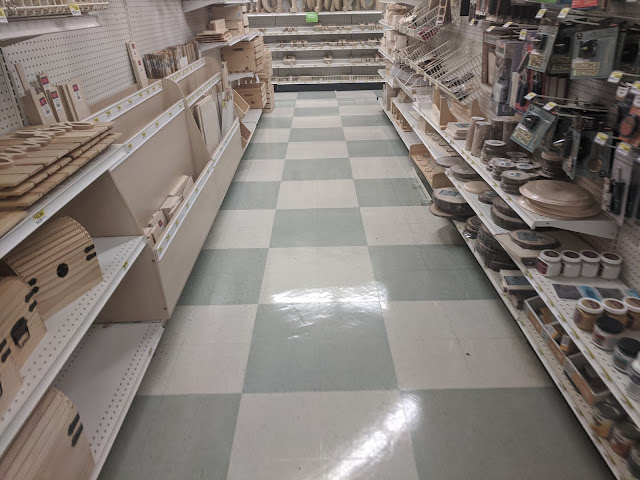 Jo-Ann's tile is a bit dated, and while it does have supermarket vibes, I highly doubt it's a survivor from any previous tenant. It is nice however. 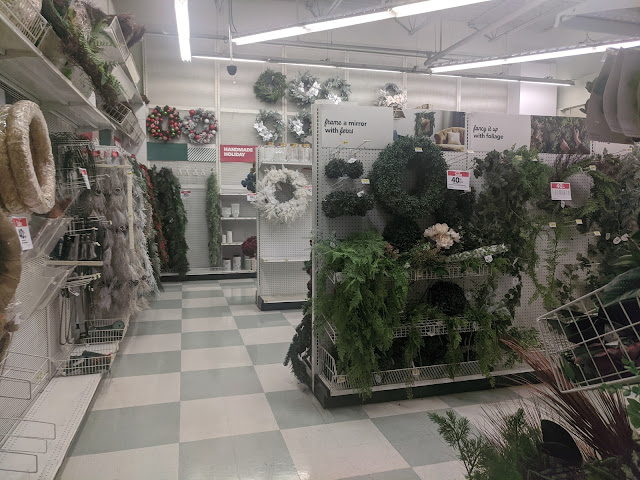 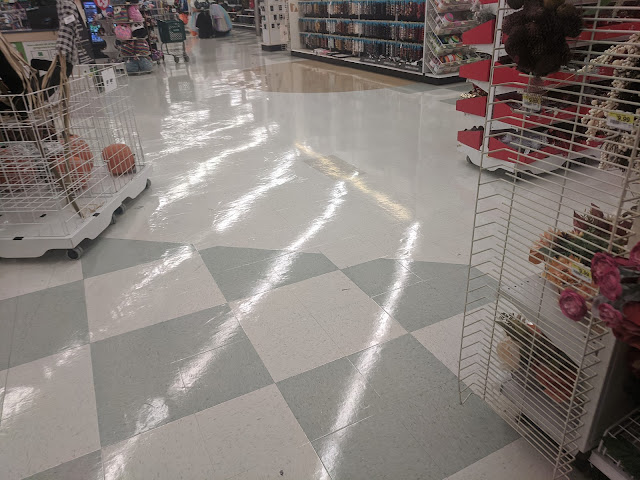 The mis-alignment of tile and aisle here is a plain sign that while the tiles haven't been swapped out in a while, the floorplan has, leaving awkward sections like this. 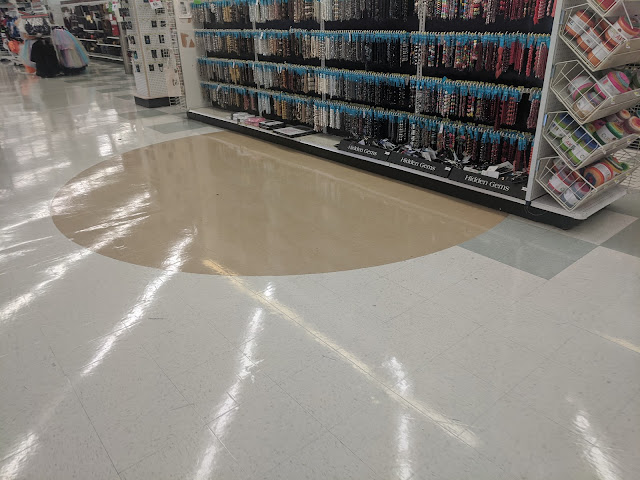 Another awkwardly placed floor feature is this large circle, which was probably once a centerpiece before the shelves got shuffled. 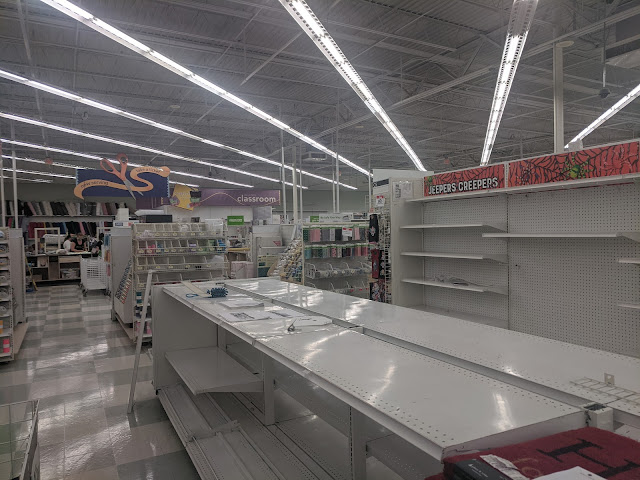 These photos date to October 14th, 2020, and I guess they hadn't fully set out the seasonal aisle by this point. I'd imagine Covid-induced shipping issues and stock shortages also had a role to play in this, so I don't take it as any sign of a uncared for store. 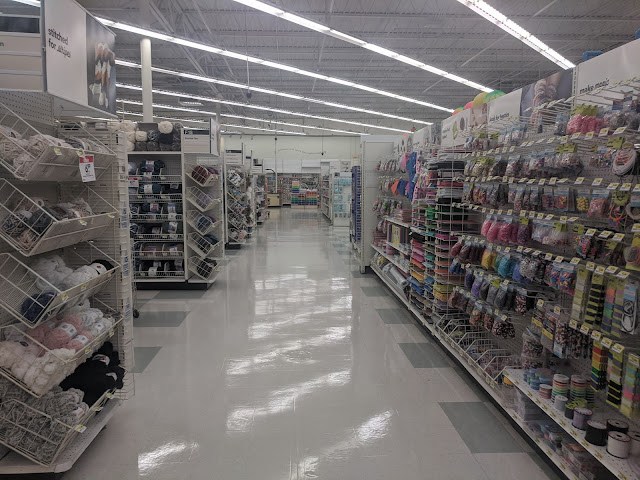 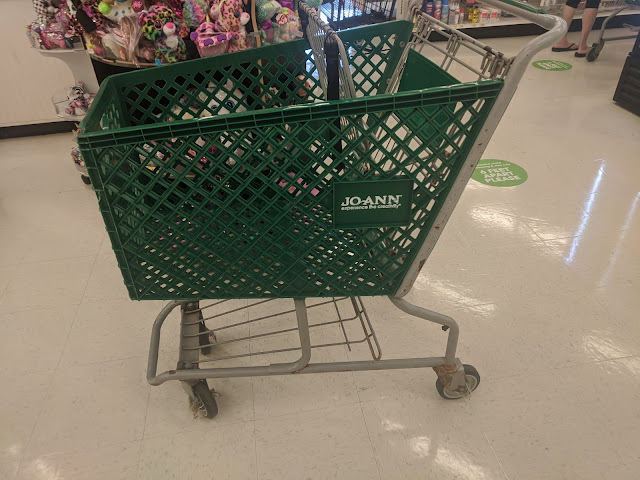 Here's a photo of one of those original, plastic-bodied carts. It's a little weather-beaten, but in better shape than most carts of this style these days. 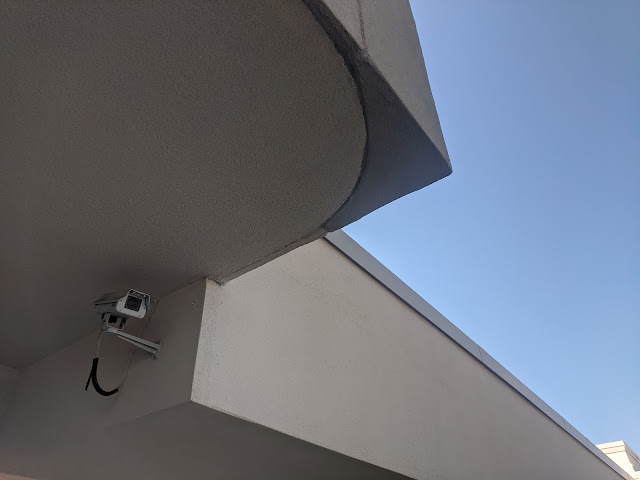 To round off our post, let's take a look at something hiding underneath the current facade... another SupeRx relic! While Jo-Ann (or one of the previous tenants) would wall over the original curved facade, it's profile can still be seen from below. While I didn't grab a picture of it, much of the plaza's facade still retains these curved corners, an interesting relic from days past for those looking for it.
With that, it's been Cape Kennedy Retail. Until next time.
Posted by Cape Kennedy Retail at 2:18 AM