Buffets are never the cleanliest places. 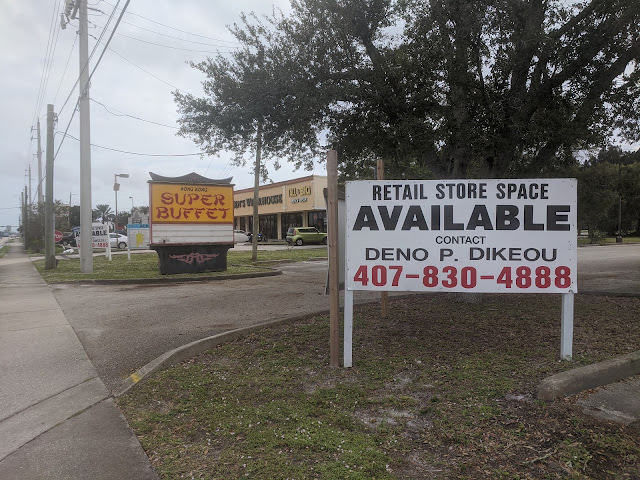 I mean I think it kind of comes with the territory. You let the general public serve their own food, and there's just some implicit risk involved. Now, for many Americans, that's a risk they're willing to take for cheap food, and, I'm a little ashamed to admit, a risk I've happily taken a few times. 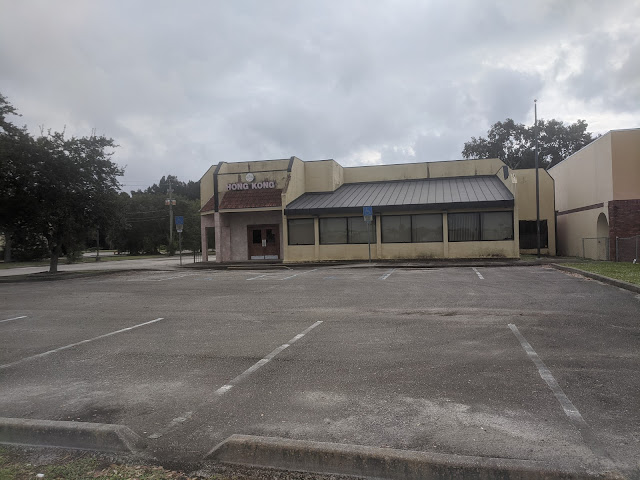 Situated along W New Haven Avenue, not far from the successful Melbourne Square Mall, sits this dire looking former buffet. A location of Hong Kong Super Buffet, which some research revealed is at least a small chain, was built as a Ponderosa Steakhouse in 1984, a tenant it would quickly lose, with O'Charley's opening in 1988, and lasting until 1996. Another steakhouse, this time the seemingly independent Remington Steakhouse, would take over the space for 1997, before disappearing in favor of Hong Kong Super Buffet, which would open in 1999.
Despite not lasting even 5 years as a Ponderosa, it still retains the very distinctive exterior architecture! 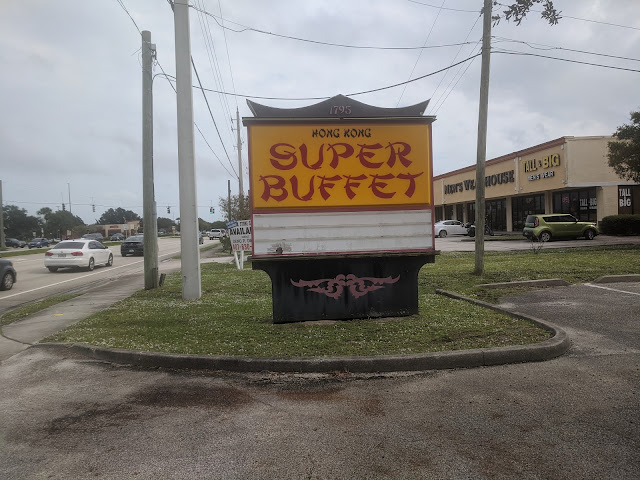 It would last, shockingly, until early 2019, before finally closing. There's a chance it may have closed in late 2018- one review notes it was "closed for Christmas" and then closed for good by February, so they may have never reopened. Either way, with the state the building is in, I'd have guessed it'd been vacant since some time in the 2000s. 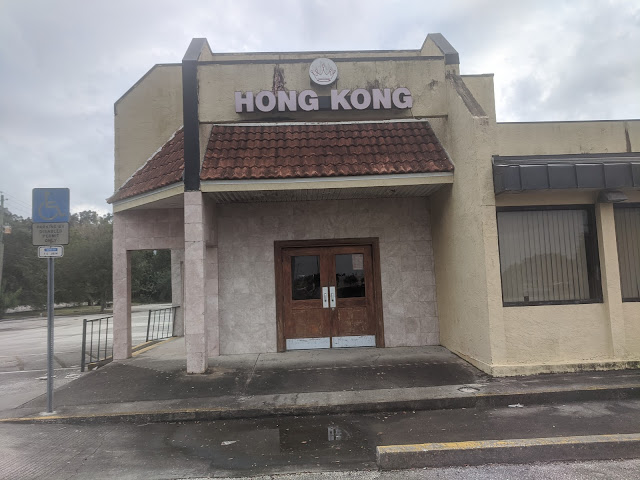 However, it's external state does reflect something else- the seeming state of it's kitchen during it's entire lifetime.
Shortly after opening in 2000, we see the first health inspector's report I can get my hands on- May 2000. Flies in the kitchen, a missing business license, missing sanitizer, and a badly sealing door among other issues. October 2001, roaches in the dish room, sanitizer in wash clothes at "toxic levels", a malfunctioning walk-in freezer. August 2002, food stored on the floor, a leaking sink, loose, unbagged trash piled up behind the building. 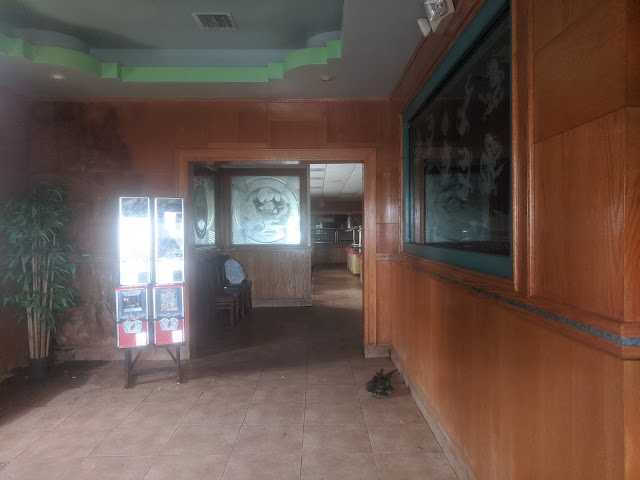 While the reports would usually say the issues were corrected upon re-inspection, there seemed to be a trend growing here. A 2009 Florida Today column would espouse it's sushi bar and food options, all at amazing prices, but things would fall south again. 2010 would see it slapped with the 2nd-biggest fine issued by the health department that year- a cool 5 grand for repeat offenses including a lack of hair nets on kitchen staff, unsealed raw pork stored next to ice cream, and a filthy can opener (they use the word "crusted"). 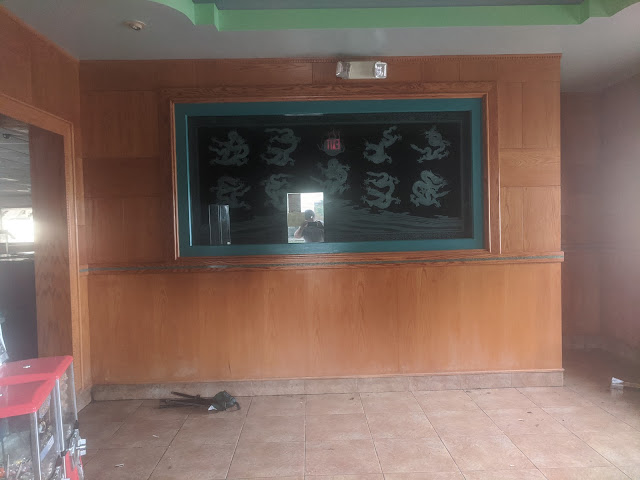 2011 would see the restaurant make headlines again, as a report penned by Florida's Fish & Wildlife Commission indicted employees from it and several other Brevard & Indian River County Chinese restaurants in the black-market buying of fish. 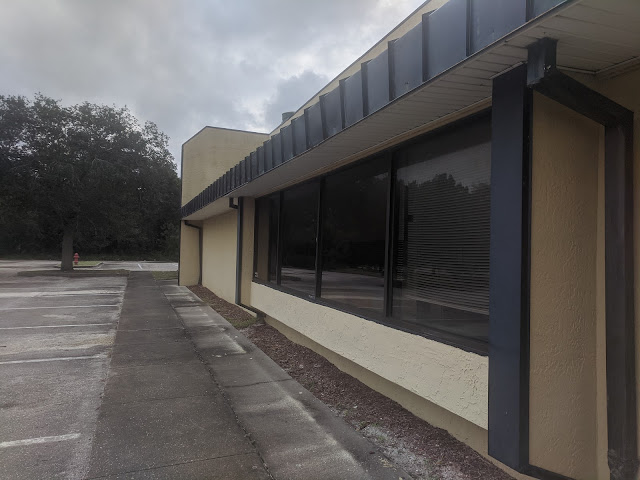 Contemporary reviews remark that the restaurant was in an increasingly dire state. The exterior was beginning to become run down and dirty, and already mediocre food would be served cold if the buffet was stocked to start with. One of the two last reviews called it's closure "merciful". 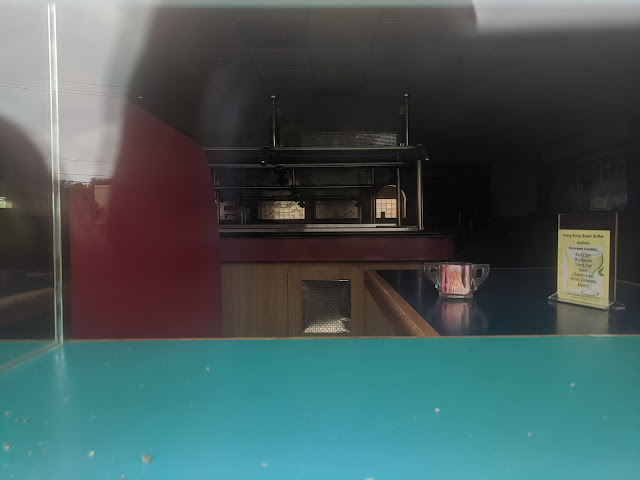 Photos of the interior or this place are hard to get, due to the blinds covering the majority of dining room windows. AFB, who dared to dine here before it's closure, says that the interior still had dividers throughout the dining room with western themed glass panels- either a long lived remnant from Ponderosa, or more likely from Remington. This photo shows some kind of counter area, they did have a decent selection of teas, so maybe that cup there was for that. The side of the building, showing more Ponderosa architecture. 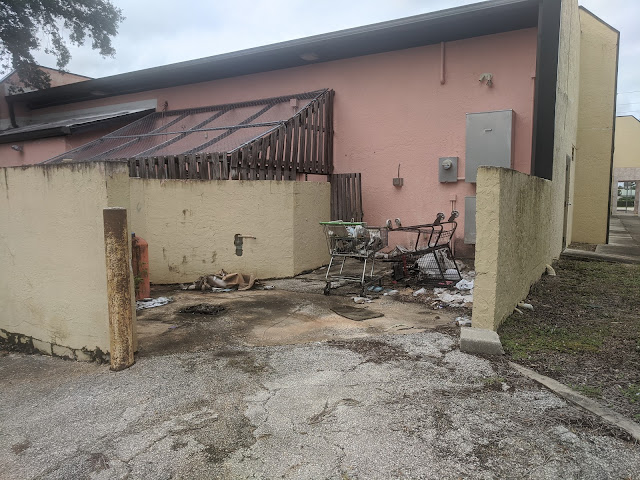 The back of the building has become home to a pile of dumped garbage, and a few shopping carts. I guess they never did truly remedy those problems about trash piled up behind the back door. 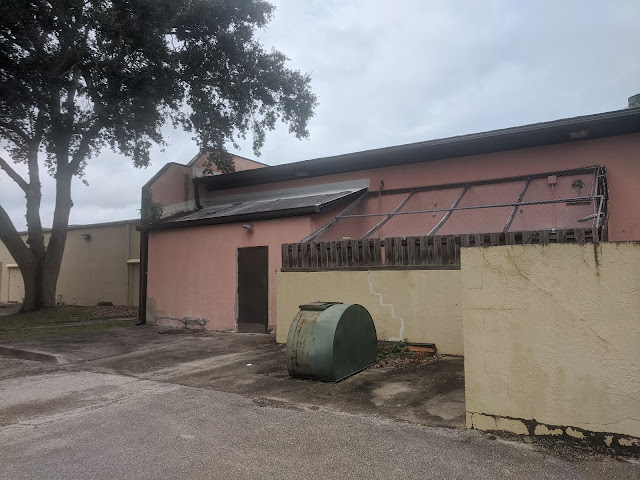 If there was an awning over the back, it's long gone now. 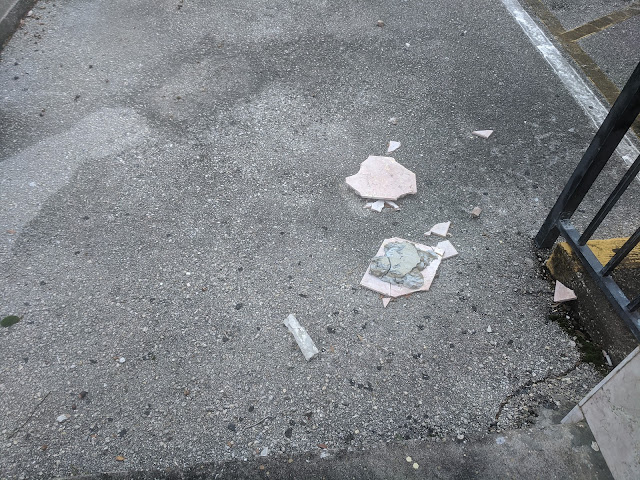 As one could guess, from the building's overall look, it's not in great condition. Near the side entrance, you can find this pile of tiling that has broken away from the facade.
I have a feeling if anyone moves into this property, they will likely demolish the building, and put a sad end to this long living Ponderosa building, which may be the only one remaining in the county.
Anyways, this has been Cape Kennedy Retail. Until next time!