Welcome to your new Winn-Dixie!

Yesterday, December 9th, 2020, marked the re-opening of Winn-Dixie at this spot, five years after it was kicked out for Lucky's Market. The old store was oft-described as dingy, run-down, cramped- an old store, untouched by time, and desperately in need of a renovation. Lucky's Market was taken as a breath of fresh air, and their total renovation made the store a place people actually loved to shop again.

But early 2020 brought a rollercoaster of emotions. Kroger would abruptly pull their funding, sending the suddenly cash-strapped chain spiraling. Plans initially called for the West Melbourne store to remain open, but, in what some may call an underhanded move, they were bid out of their own home by none other than the previous tenant- Winn-Dixie. Now with the full might of a leaner, meaner Southeast Grocers behind them, Winn-Dixie wanted to do it again, but properly this time.

As documented in this post on my personal site, work would begin in August with a basic interior strip-out, followed by serious demolition in October, and a quick turnaround and polish during November. All in the lead up to the big day- 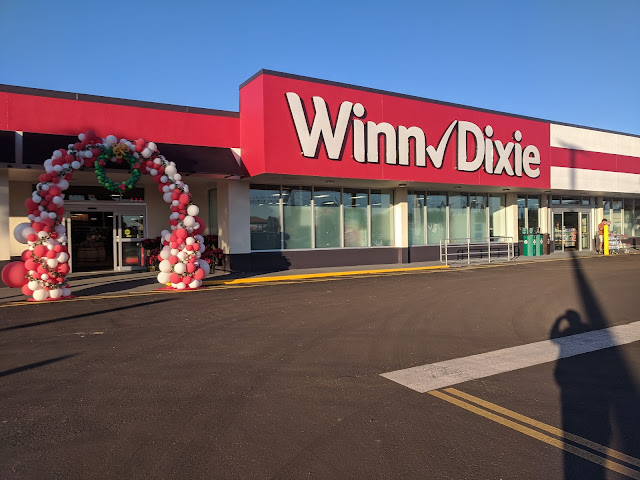 Grand opening! The store would open to the public on a crisp, cold-front morning with giveaways and confetti. I didn't make it there that early, other commitments made me wait until the afternoon. But the store was still abuzz with activity! 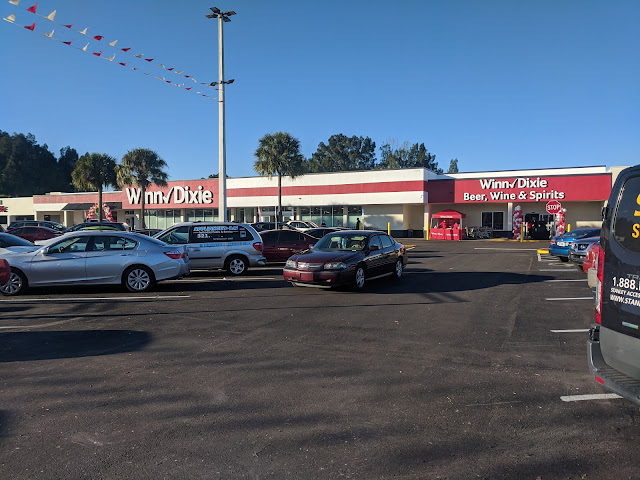 A packed- and most importantly- repaved! Parking lot. It had not faired well over the years, and was a sunken, pothole ridden mess. Winn-Dixie's bright new exterior is also a welcome change- Lucky's was premium, but understated, and the original Winn-Dixie color scheme was just dingy. This facade is bright and eye-catching. 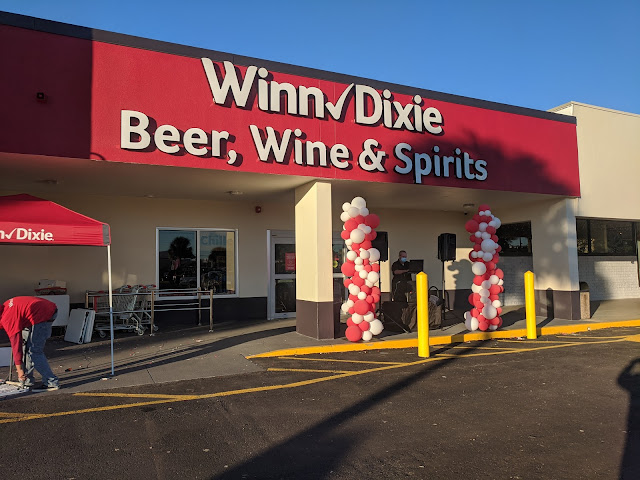 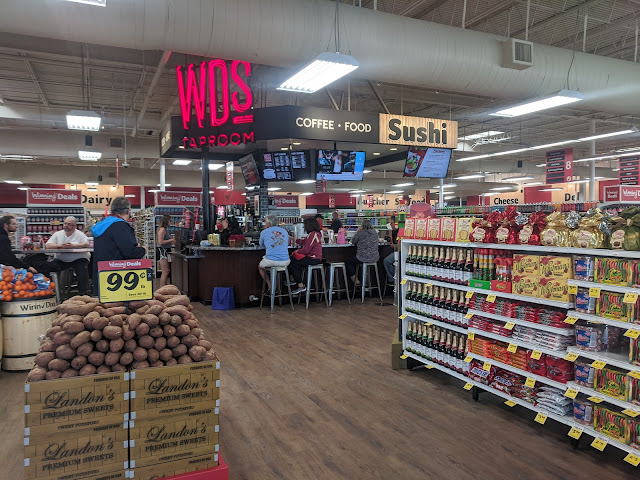 Front and center when you enter the store is "WD's Taproom", located roughly where Lucky's ramen bar lived. The space provides coffee, beer, snacks, and sushi, and is the only food service area in the store. 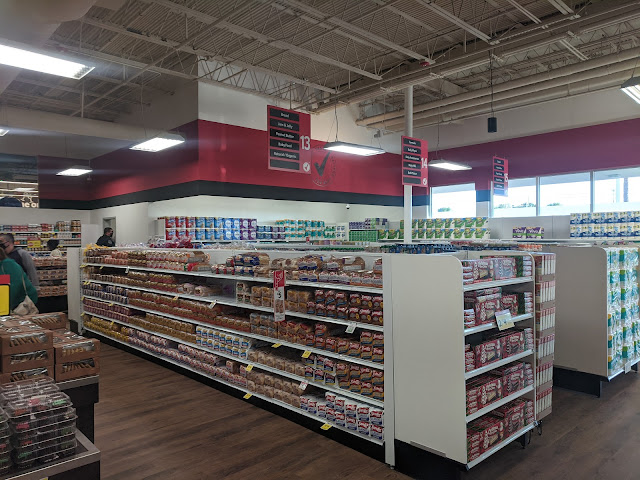 Lucky's original cafe area, seen here, has been quietly converted into sales floor. To my left would have been the "apothecary", or health & beauty, section of Lucky's. 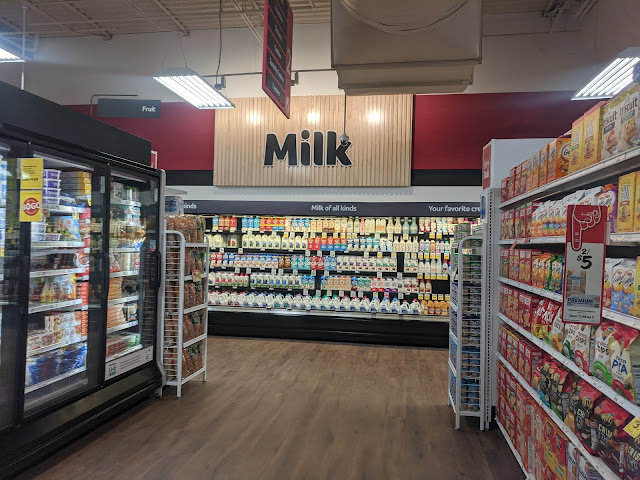 Dairy products live along the back wall, with some fun smaller signage about Milk of all kinds, Your favorite cream cheese, etc. Speaking of- this is a new decor! The tentative name being "Made in Florida", based on it's emphasis on local products. 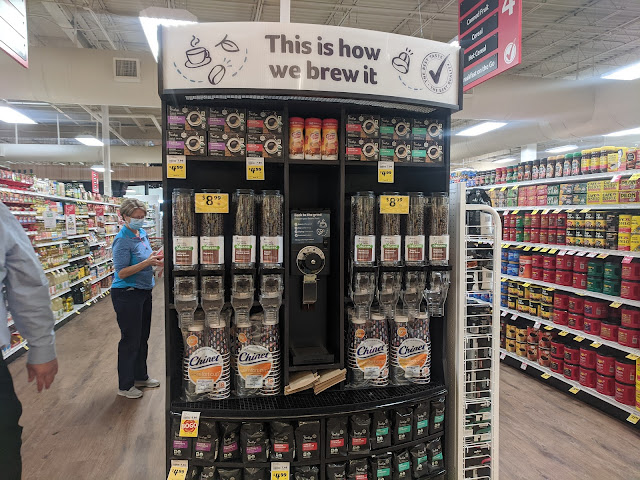 This coffee section is a small reminder of the bulk goods section that used to be a trademark of Lucky's, taking up an entire aisle. 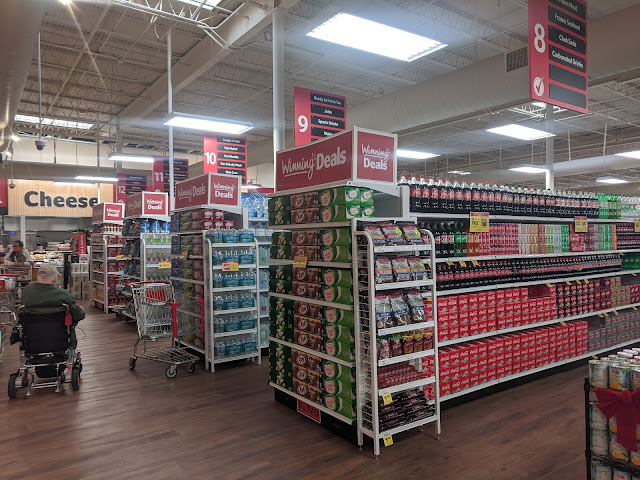 The more normal aisles here, starting with soda. Made In Florida aisle signs are flat with raised plates, as opposed to the otherwise standard triangle design. 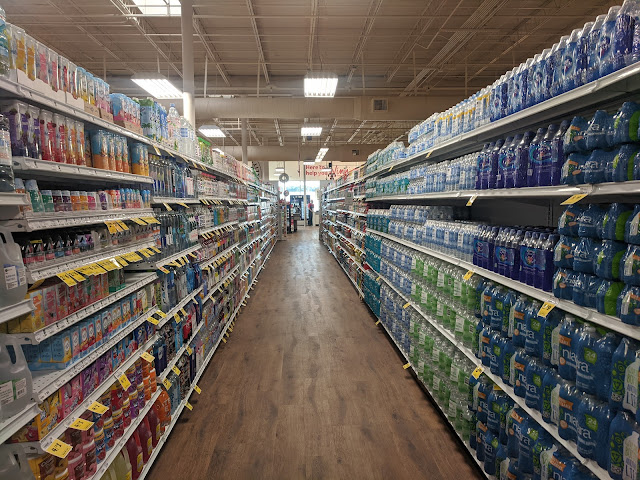 Unlike many stores that collate soda and other water/sparkling water/kool aid/etc into one aisle, they're two separate aisles here at Winn-Dixie. 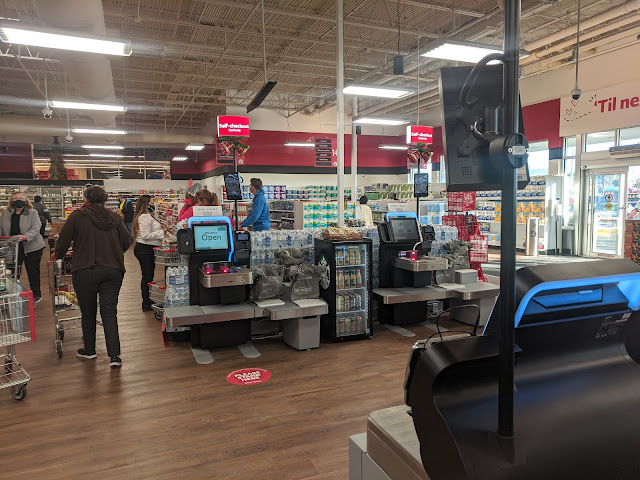 Our first look at the front end shows the self-checkouts, a fixture of any newly opened store these days. 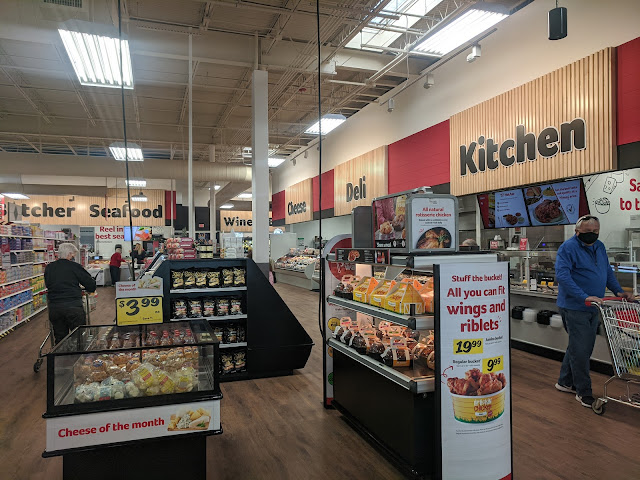 Winn-Dixie's Cheese-Deli-Kitchen and Butcher & Seafood sections roughly follow Lucky's pattern- the Deli & Kitchen are located where Lucky's "The Kitchen" section was, however Winn-Dixie shifts the hot bar into the counter and out of the middle of the aisle. The Butcher & Seafood section can be seen in the back, lining up exactly with Lucky's Meat & Seafood counter, and off to the right, the "beer corner" can be seen. 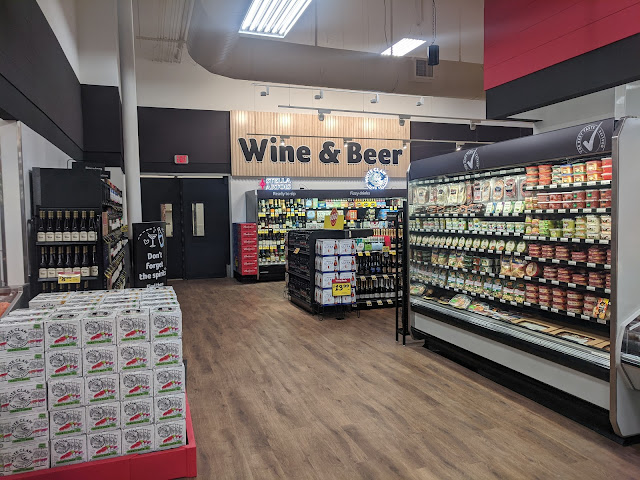 While Winn-Dixie added their own full liquor store, they also re-built a beer & wine corner in the same place Lucky's had it. While it would make sense for this to connect around the back to the liquor store, I don't think Florida law would allow such. 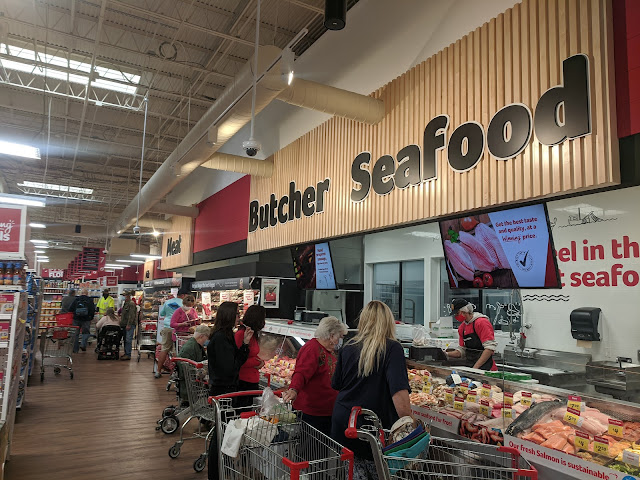 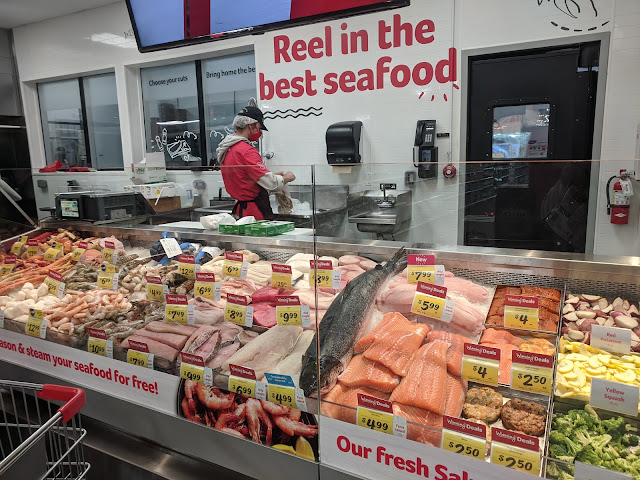 A photo of the fully *ahem* fleshed out seafood counter. 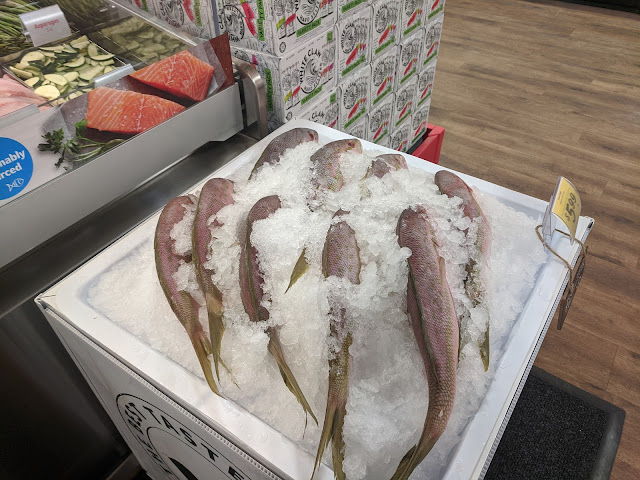 Sitting on two crates outside the counter are full fish, on ice. I think this is the first time I've seen this in a conventional supermarket (as opposed to something focused on Hispanic foods, or a wholesale/business supply grocer). 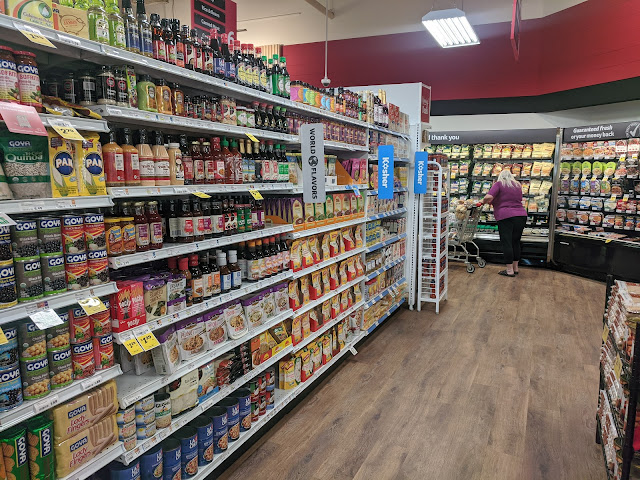 This shot shows the end of the International Foods aisle, showing the "World Flavors" signage that also pops ups briefly elsewhere in the store. 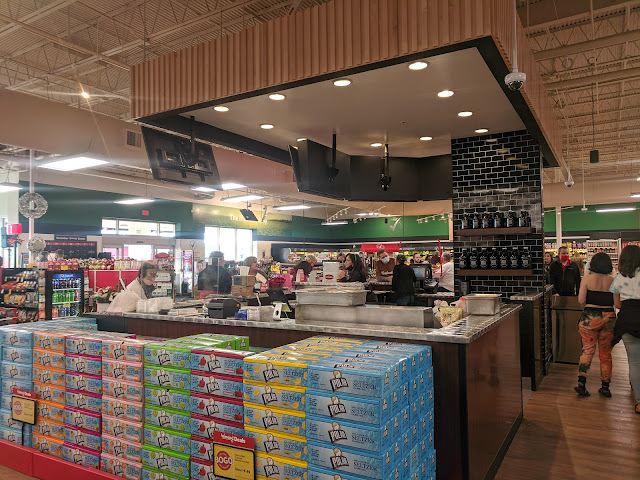 A back view of WD's Taproom- but what's that, along the wall? 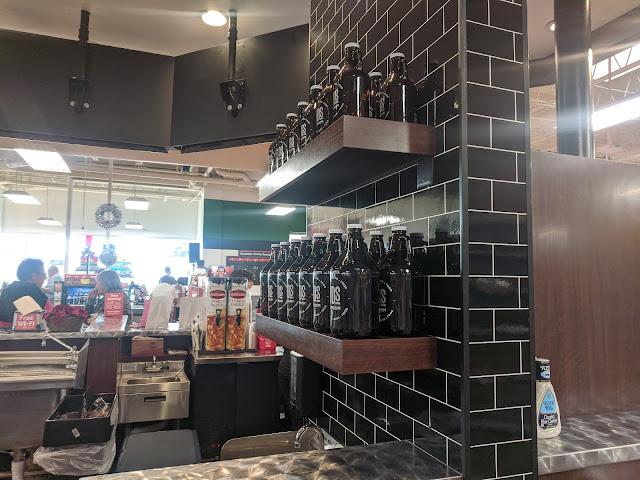 Some WD's Taproom decorative jugs! I wonder where they got those from?

I really, really do wonder.... 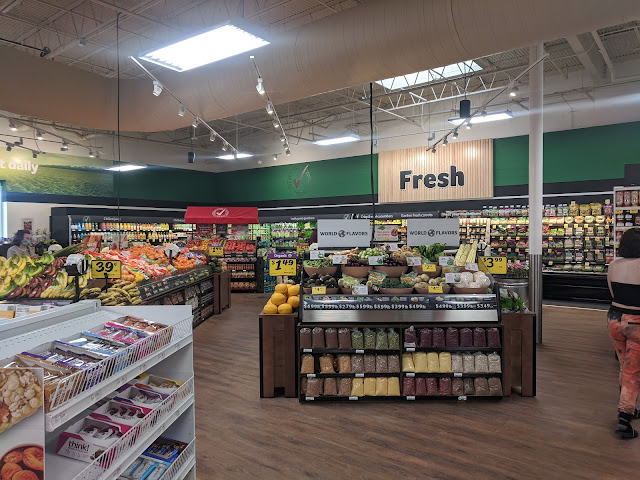 Anyway, going back to the store, we get an overlook of the produce section, again in the same place as Lucky's had it. 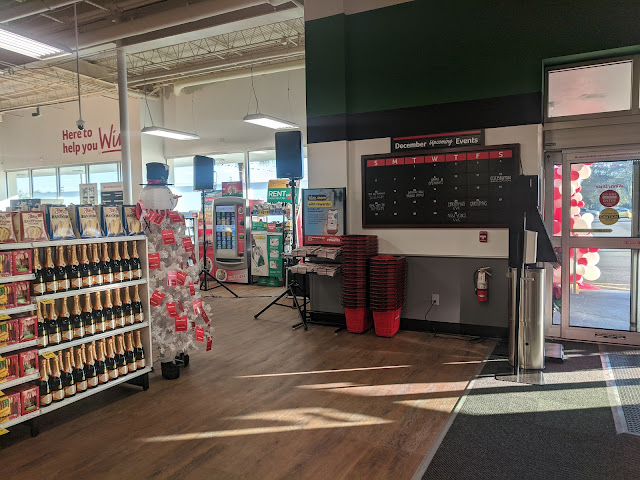 A feature new to Winn-Dixie is this calendar near the front, which is a nice touch. The whole front end is a little bit jumbled, but very nice overall. 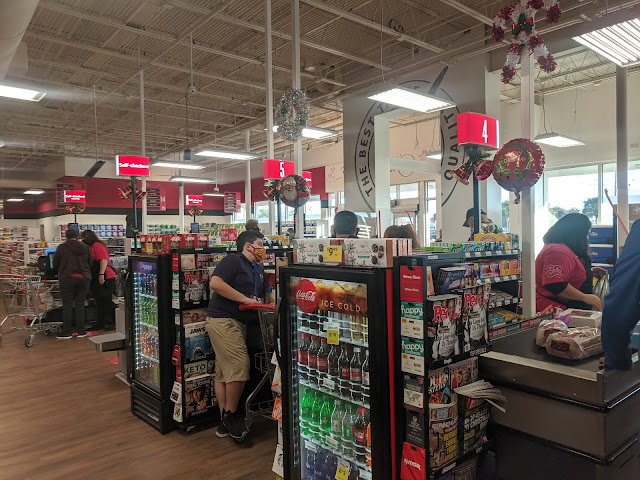 This photo shows the crowded checkouts- pretty well designed and sharp looking. Better than the badly refurbished Marketplace-era units in many other stores. 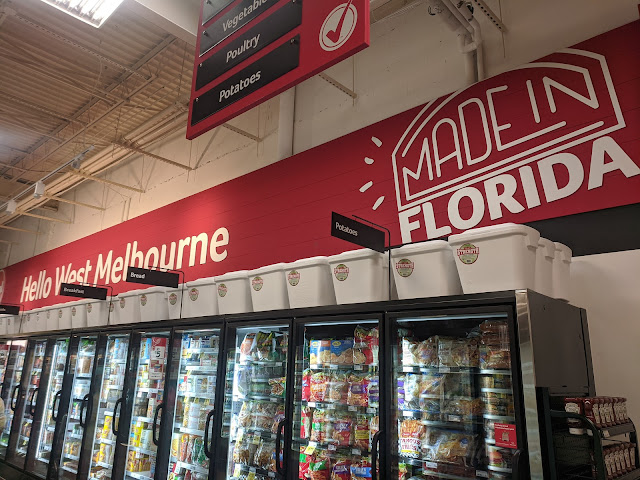 Unlike many stores, the name of the local community is emblazoned along the right wall, instead of near the front of the store. This area, under Lucky's, would have had a large Lucky's "L" logo on the wall, with "Frozen Foods" signage mounted on the coolers. We also have the large "Made In Florida" emblem, which gives this decor package it's name. 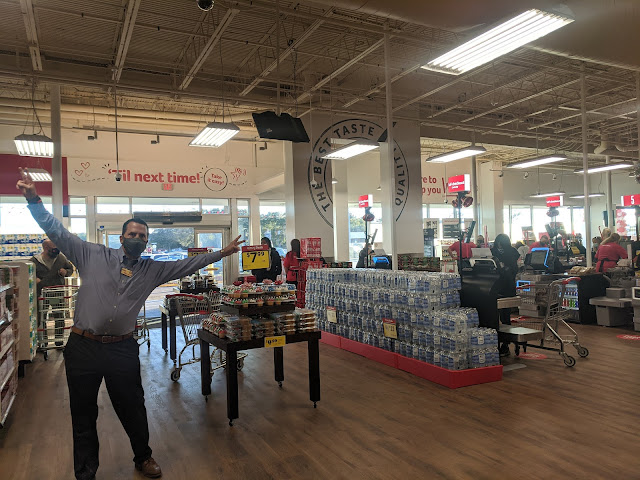 We'll end off with my favorite photo- the front end is always the hardest part of the store to photograph, because of the abundance of employees milling about to keep a watch over and staffing the checkouts. But this time, an employee (I presume the manager) saw me taking photos, but instead posed to photobomb! It's nice to get noticed taking photos, and get a positive response, not a negative one. This was a good way to top off the visit, which was overall very positive. This may actually be the first grand opening I've ever been to, and even though I arrived around 4 PM, everyone was still very cheerful and the mood was great.
Overall, I have high hopes for this store. I loved Lucky's, and I found the last minute bid a tad underhanded, but Winn-Dixie has done a great job with this store, and in the end, I have to question how well and for how long Lucky's could have kept it afloat, as an out of the way Floridian satellite from their now Colorado-based operations. Is Winn-Dixie's decor as flashy as Lucky's? No, and I still like Lucky's decor more. But Winn-Dixie's decor has grown on me greatly since I saw it in the opening photos of the first converted Lucky's/Earth Fare stores, and it's a pleasing evolution from the very in your face "Down Down" decor.
In the end, this has been Cape Kennedy Retail. Until next time!

Posted by Cape Kennedy Retail at 7:56 AM