The Tiniest Publix You Ever Did See - Melbourne Shopping Center - Melbourne, FL 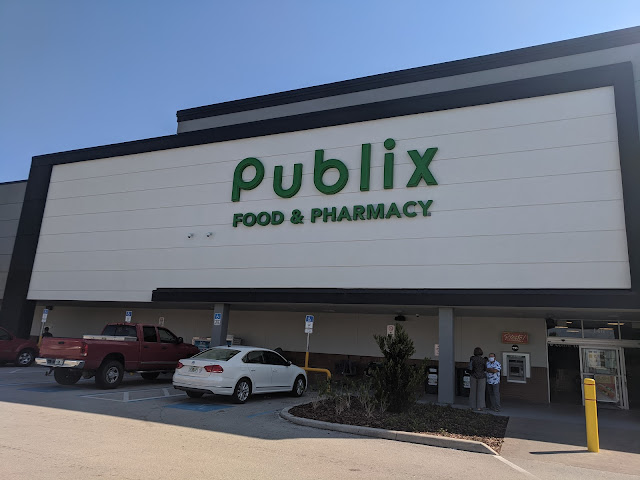 This Publix would open in 1959, along with the Melbourne Shopping Center- at the time, the biggest and brightest shopping center south Brevard could boast! The store opened with the then-standard "wing" style facade, but would remodel many times over the years. The current facade was installed earlier this year, and while it fits Publix's newest Evergreen decor very well, this store still sports Classy Market 3.0
(EDIT May 2021 to correct information, thanks to AFB)
While this store is quite small, it's actually a relatively modern 28M format Publix. This plaza's original Publix was closed in 1999, when Publix demolished the former Woolworth to build this store. The original Publix space has long been subdivided, and is roughly where Cato Fashions and Bealls Outlet are now. 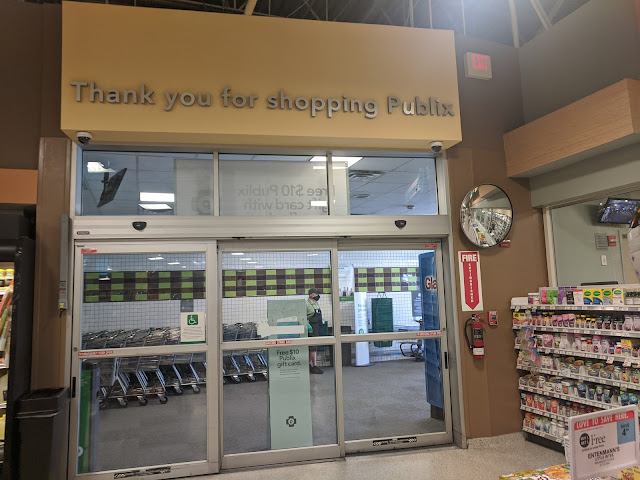 The entryway of this store was hard to get a photograph of, due to the loitering, cart-disinfecting employee you can see behind the glass. It's very small, and turns towards the right to enter the store. 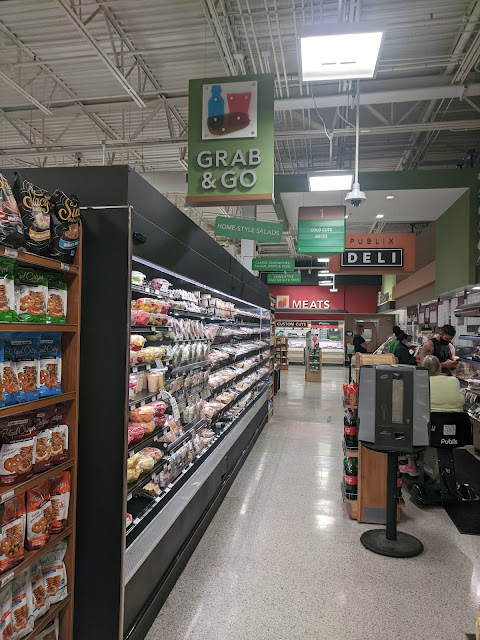 One of the more modern amenities this store has gained is a Grab-n-Go cooler, wedged next to the bakery and deli. 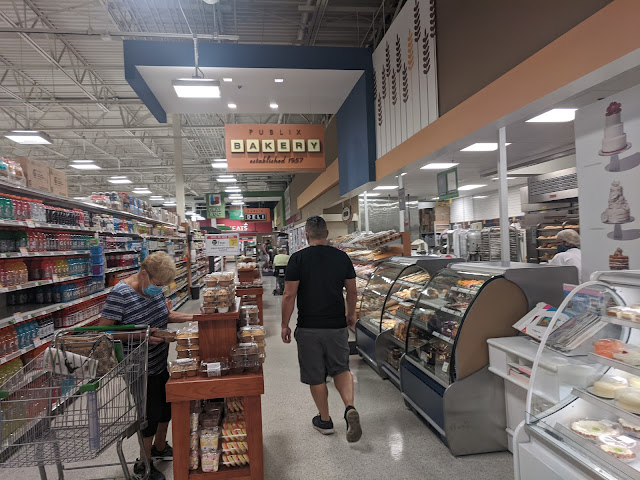 You heard that right, despite it's tiny size, this store does feature a deli and bakery, though they're smaller than normal. When this store was built, I don't believe Publix was installing bakeries in their stores, so this must have been bodged in at a later date. 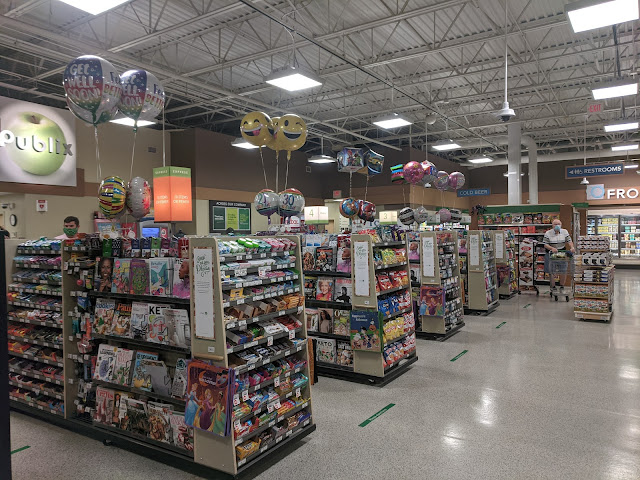 Even with only a handful of checkout lanes, you get the option of Express or normal. 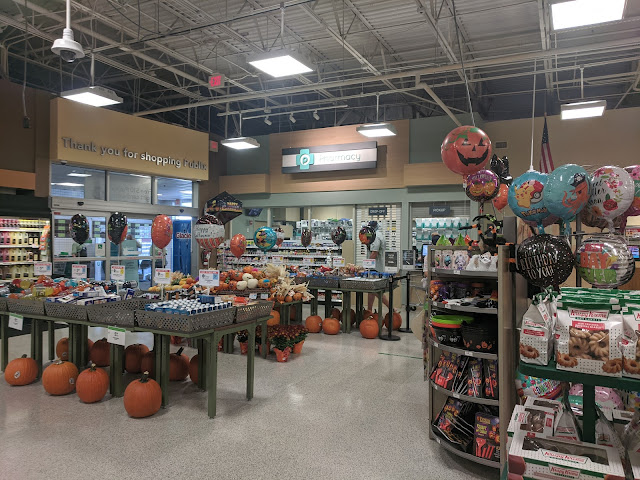 Another assuredly bodged-in addition is this pharmacy counter, located in the front of the store near the entrance, and is more of a boxed-in island, as compared to Publix's more common, more traditional pharmacy counters. This one actually reminds me Albertsons' pharmacy islands, a bit. 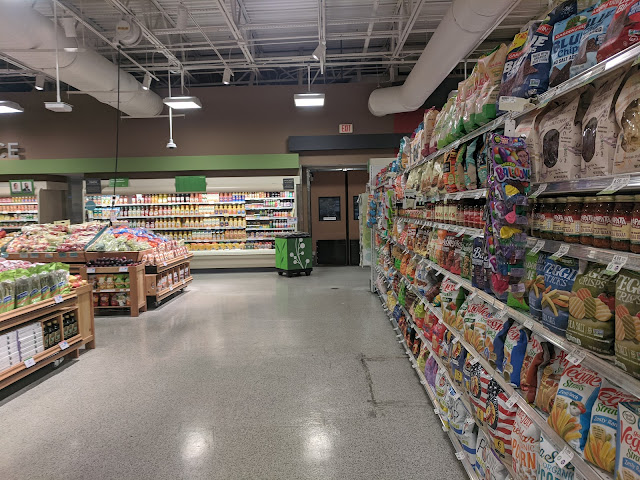 Looking towards the back of the store, showing the produce section to the left with chips on my right. 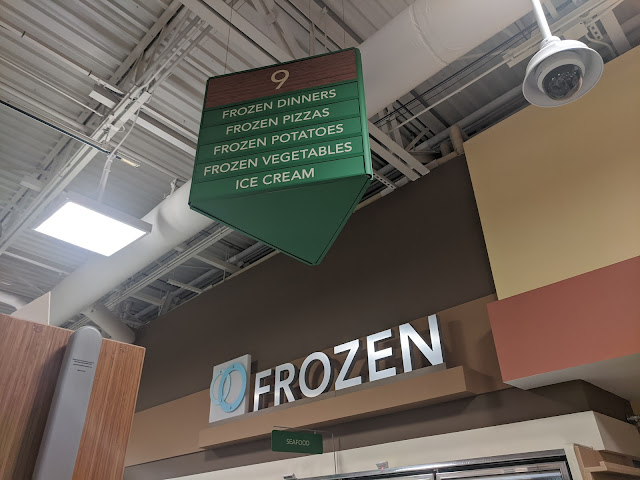 While this is just a standard CM3.0 aisle sign, there is one thing to note- This is the last aisle. Yep.  The entire store only has 9 aisles. It's a small one! 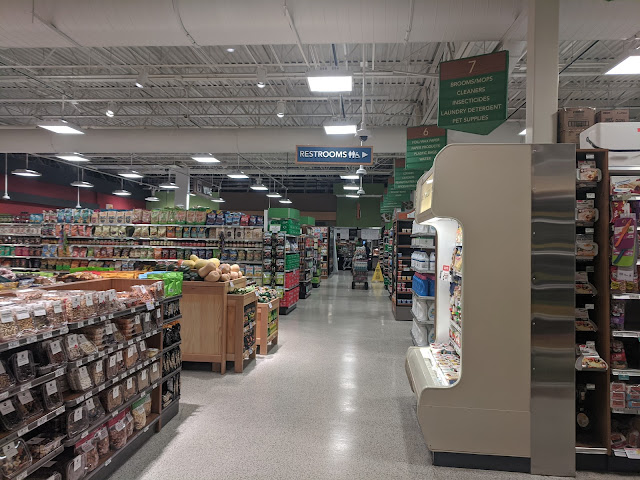 Looking down from Aisle 7 to the other end of the store. The cooler to my right, it seems to be a standard install in every Publix I've seen. I have to wonder how old they are. 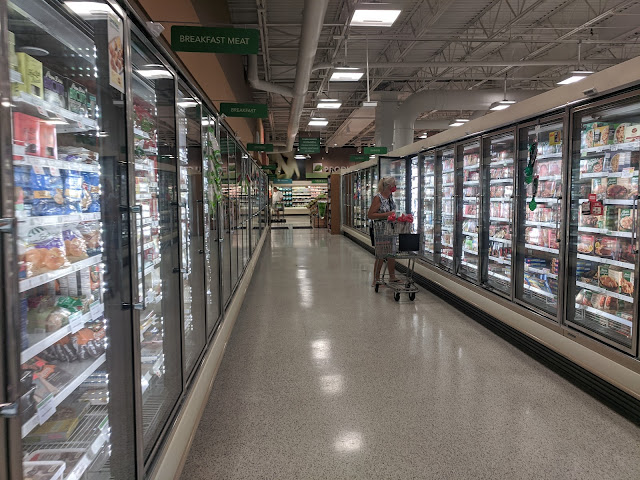 I can't remember if this was the only frozen aisle, or maybe one of two. Still impressed they got a decently sized frozen section in here at all. 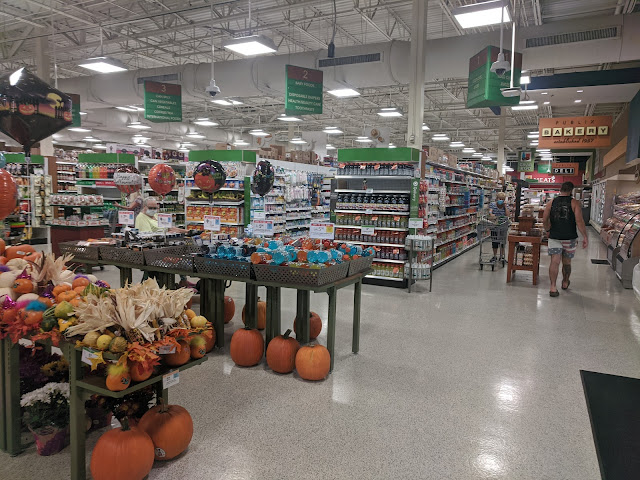 The store also managed to cram in both a seasonal display of pumpkins and fall decor, and a table of BOGO sales. This store really, despite it's size, does it's absolute best to be a fully featured Publix. And it's doing an admirable job! especially for it's age, with it's opening date making it the oldest operating Publix in Brevard County.
Until next time, this was Cape Kennedy Retail.
Posted by Cape Kennedy Retail at 8:40 AM