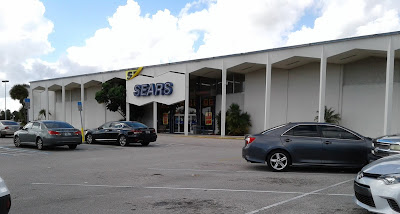 This Sears store opened in 1968, coinciding with the opening of the neighboring (now dead) Brevard Mall, which featured Montgomery Ward and JCPenney as its anchors (more on that here, though). In 2015, this store was sold to Seritage Properties as part of SHC's controversial REIT deal, which is typically not a good sign for the long-term future of a Sears or Kmart store. Even with that being the case, this Sears location was supposedly a "Top 200" store from what a few employees told me, citing this Sears location had particularly strong sales in clothing. As usual, Eddie doesn't care about any of that, and this Sears store was marked for closure during SHC's initial bankruptcy filing in October 2018. Liquidation sales had begun here in late October 2018, with the store closing for good on January 6, 2019 at 1:45pm.

Tuesday, November 13, 2018, approximately 11:00am: With the liquidation sale at the Melbourne Sears in full swing, AFB sets out to see just what has changed since his last visit, which took place prior to the sale beginning. Let's jump into this post and see what has changed, as we begin part two in AFB's four part series on the Melbourne Sears store: The Closing Begins.

When we last left off with our coverage of the now-former Melbourne Sears store, we toured it in its pre-liquidation form. Jumping ahead nearly a month from when I took that last batch of photos, we find the Melbourne Sears store in the dreaded liquidation mode. The red and yellow liquidation signs of doom are now up, and a large "Store Closing" banner had been hung above the Sears logo on the front of the store. However, as you can see in the above photo, a nice wind gust had gotten the best of said "Store Closing" banner, but I won't complain about that. With the banner now mostly hidden from sight flipped up on the roof, we don't have that distraction to take away from the great mid-century architecture that graced this Sears store into its final days. 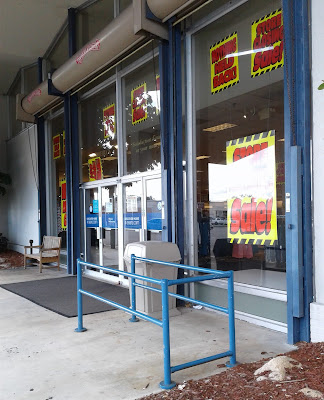 In the previous post we took an extensive look at this store's exterior, admiring the unique architecture of this very 60's Sears store. With that extensive exterior tour out of the way, we'll just skip along to the front entrance as we begin to head inside, where we will see just what has changed since the liquidation began three weeks prior. Approaching the front door, there was no shortage of store closing signs plastered to the front windows... 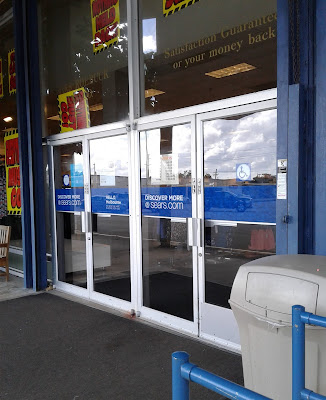 I believe this was my best attempt at capturing the "Sears, Roebuck, and Co. Satisfaction Guaranteed or your money back" lettering above the doors. That lettering, in addition to the architecture, just made this a great example of a 60's Sears store - a Sears opened at a time when this company was seemingly indestructible. 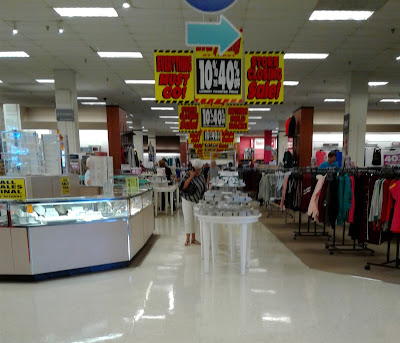 Stepping inside, yet more store closing signs can be seen lining the main aisles as far as the eye can see. The liquidation discounts began at 10%-40% off (a fact that was reinforced quite a bit here!), and most of the departments were still mostly stocked even three weeks into the liquidation process. However, the folks of Melbourne had gotten word of this closing, as a decent crowd of people showed up on this day to pick over the remains of this once proud department store. 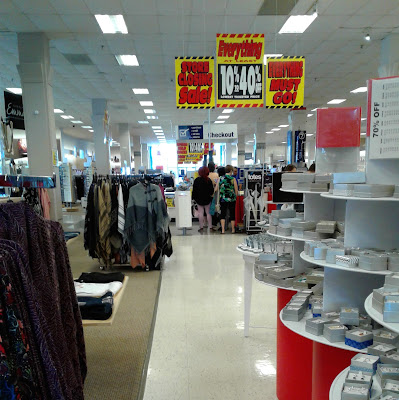 Here's a look across the front of the store and the women's clothing department, as seen from standing in front of the jewelry counter. The front register can be seen in the distance here, a line beginning to form with shoppers wanting to pay for their discounted goods. 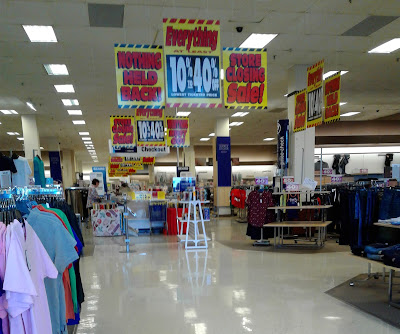 Moving deeper into the right side of the store, here's a look across the men's clothing department. Like I said, there was still quite a bit of merchandise to be found here, as the clothing departments still appeared fully stocked three weeks into the liquidation sale. 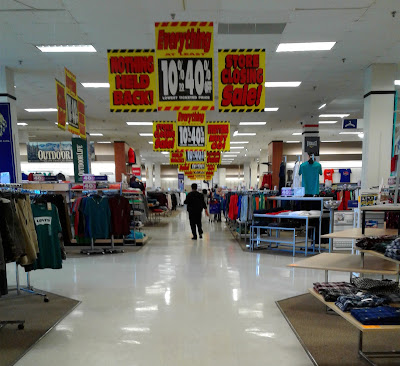 Here's yet another look at the men's clothing department, this time looking back down the main aisle toward women's clothing. 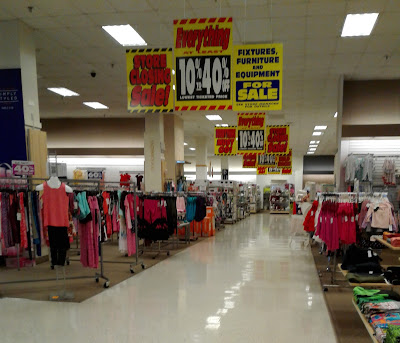 To the left of the men's clothing department was children's clothing, pictured here. Things were beginning to thin out just a little bit here, but again, still plenty of merchandise to be picked through. 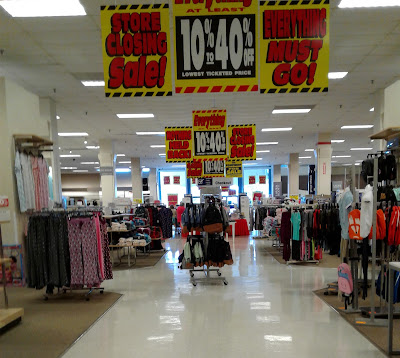 Stepping out of the children's clothing department, here's a look back toward the front of the store and its main entrance. Women's clothing and the main register lie just ahead in the distance. 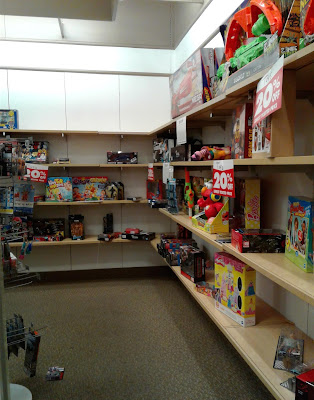 This store's new toy department was never really given much of a chance to get off the ground. Almost as soon as it was set, the announcement of this store's closure came out. In typical store closing fashion, the toys in this area were now thrown around and shoved wherever there was room. However, this was really the worst destruction I saw at the closing of the Melbourne Sears store. Overall, the employees were able to keep things neat and orderly here, or at least as neat and orderly as you can get at a store closing. Thankfully, I saw nothing like this scene here! 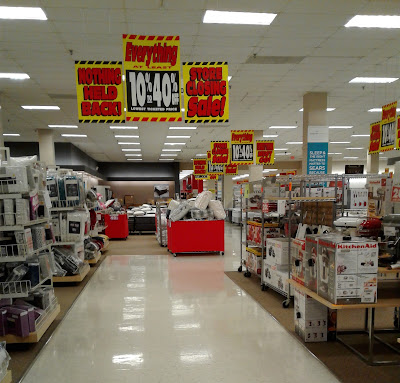 Moving along to the left side of the building, here's a scene from the housewares department, looking toward mattresses in the distance. 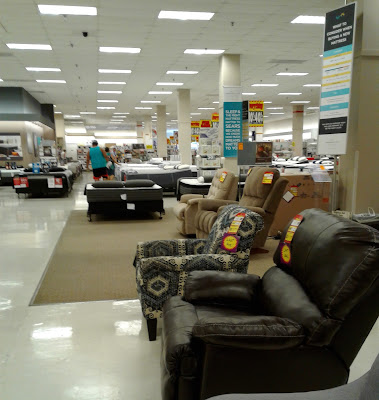 Plenty of furniture and mattress displays were up for grabs this day, all marked down and ready to go. All of these displays needed to be sold in order to convert this part of the store into the main fixture sales department in the coming weeks. 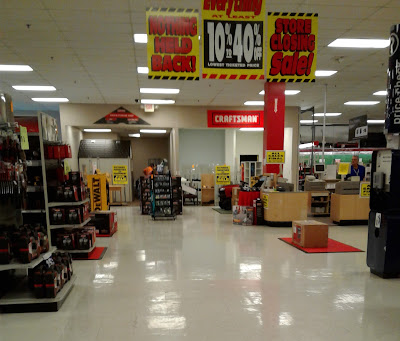 Leaving furniture behind us, we now enter the hardware department in the back of the store. Straight ahead (where the plastic shed and Craftsman banner are along the back wall) were two small alcoves. The alcove on the left was formerly an H&R Block office, while the alcove on the right was a hearing aid center. I touched on that a bit in my last post, however this photo gives us a better, straight-on look at the placement of those two alcoves. At this point in the closing, the first few fixtures up for sale were placed in these two alcoves. As time progressed, the fixtures sale would gradually grow out of those alcoves and take up most of the salesfloor space you see in the above photo, with the main fixtures staging area overflowing into the former furniture and mattress department behind me. 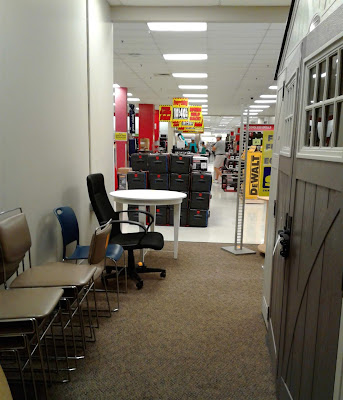 Here's a quick look at the scene from within the old H&R Block alcove. Not too much for sale here just yet in terms of fixtures. Most of the fixtures up for sale at this point were some random furniture odds and ends that appeared to come from some of the offices in the back. 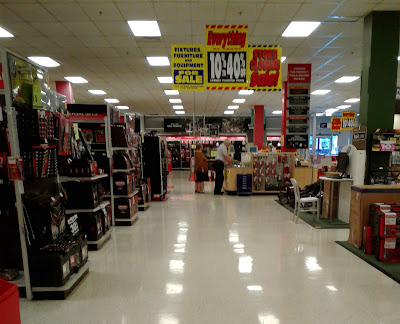 Here's another look at the hardware department, as seen looking from the right side of the department toward the left side. 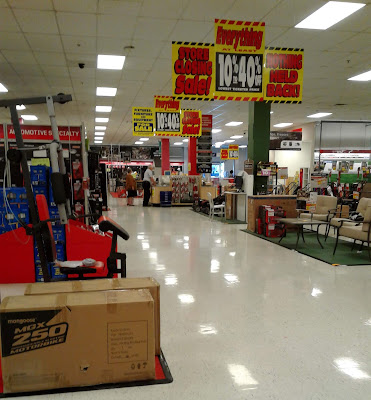 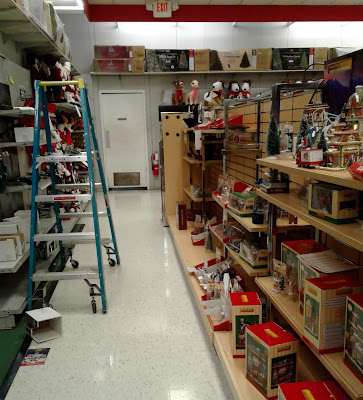 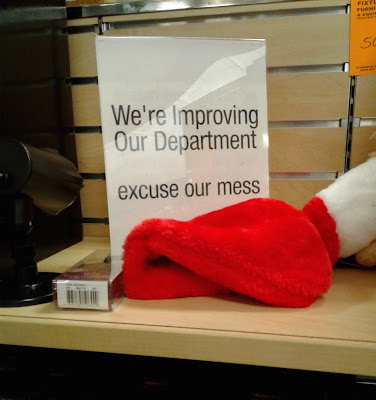 Ah, "improving", so that's what they're calling all that strewn about stuff these days 😀 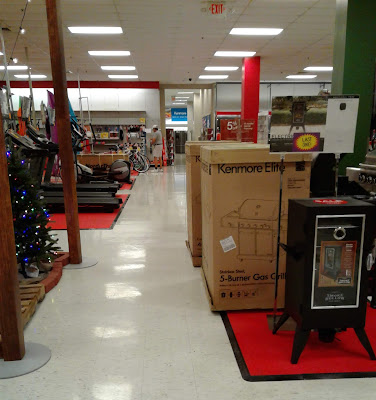 Emerging from the Christmas department, here's a look toward sporting goods and the corridor that leads into the appliance department. 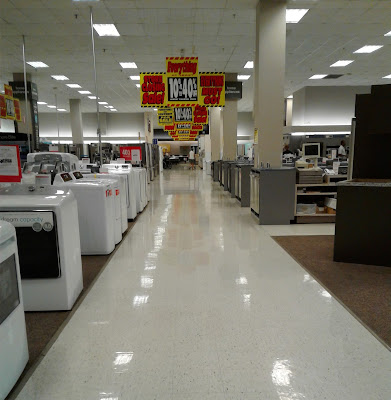 Speaking of appliances, here they are! The appliance department was unusually quiet this day, even though the clothing and hardware departments were hopping. During my visits to this store during normal operations, the appliance department always seemed like one of the busiest parts of the store, with plenty of salesfolks wandering around in this area too. However, at discounted prices, it wouldn't be long before the selection of appliances here would begin to dwindle. 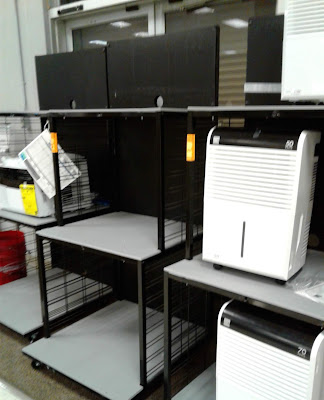 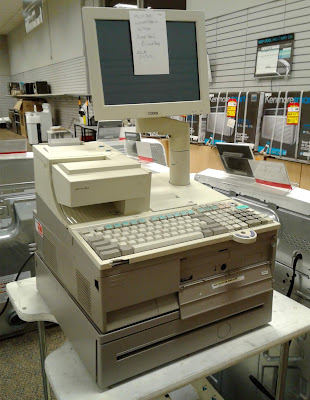 It doesn't look like this register would be ringing any sales anymore... 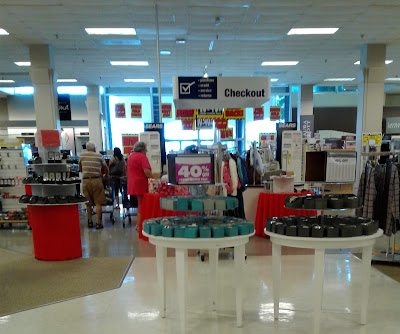 Since not a whole lot has changed here at the Melbourne Sears store three weeks into the liquidation, we'll keep today's update brief. Here's one last look toward the front of this store and the main front register. 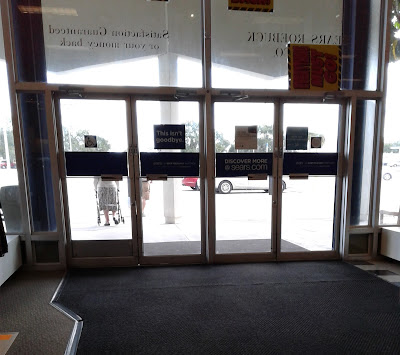 Only three weeks into the liquidation, and already one of the store closing signs hanging from the window had fallen down! 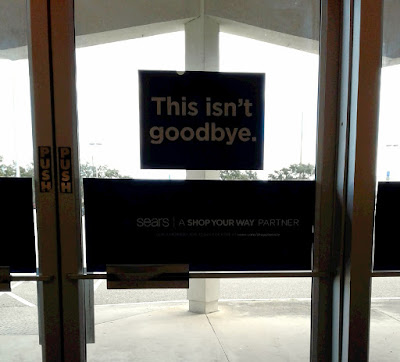 As the sign on the door states: This Isn't Goodbye from the Melbourne Sears just yet. For the next installment in my series on the closing of the Melbourne Sears store (Part 3 of 4), we'll jump ahead a few more weeks. In the next post we'll begin to see some pictures that will really make this liquidation sale feel like a real liquidation sale, emptiness and sadness and all. Stay tuned!

AFB
Posted by Albertsons Florida Blog at 10:43 AM