Crafts & Stuff - A Liquidation and a Lost History 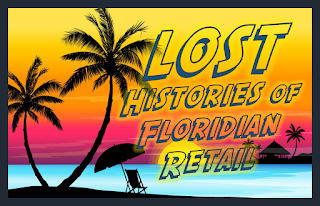 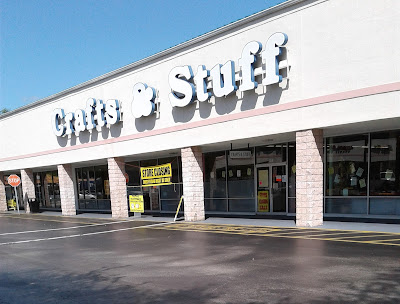 Even though we're in the midst of covering the closure of the Melbourne Sears store, we're going to jump south about 30 miles to take a quick look at another store closing. This store closing is one I was completely unaware of when I found myself down in Vero Beach on this rather nice March morning. I came really close to not visiting this closing at all, but in the end, I'm glad I did. Until visiting this store and doing some research after the fact, I never realized Crafts & Stuff was once a decent sized chain that had slowly fallen from grace as the 2000's wore on. And considering this was the very last location in the entire chain, I guess it was meant to be that I found this store before it met its end...

After making a Kmart run on this particular morning, I decided to drive around Vero to hit up some thrift stores before heading back home. Next door to Crafts & Stuff was one of the thrift stores I decided to visit in my quest to potentially acquire more junk I probably don't need. Since I parked at the far end of the plaza by the Fresh Market (which I wanted to stroll through after the thrift store), I walked over here to the thrift store, not noticing the banner hanging on the front of the building announcing Crafts & Stuff's liquidation. It wasn't until I was in the process of driving out of the parking lot that I saw the closing banner in front of Crafts & Stuff. After thinking about stopping in for a moment, I decided against it and pulled out of the lot. Driving away, my curiosity about the liquidation began to grow for some reason. Just as I began to approach US 1 a few blocks away, I decided to turn around and see the liquidation for myself. The photos you'll be seeing today are a product of that decision. 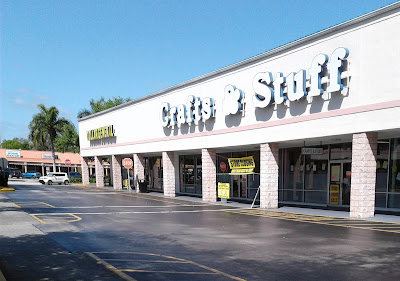 Before we jump into the closing, we first need to take a moment to go over the history of this now defunct chain. There isn't much about the history of Crafts & Stuff online, however I was able to compile together some information about the company from its old websites. Crafts & Stuff was founded in 1976 according to the old website. I wasn't able to pinpoint where the first store was, but I assume it was one of the Palm Beach County locations, as Crafts & Stuff's corporate headquarters was located in North Palm Beach until the majority of the company dissolved. Since Google tells me this was Crafts & Stuff #2, I'm assuming this was the second store to open in the Crafts & Stuff chain. I can believe that, as this place felt pretty old inside. Crafts & Stuff's stores, while a bit smaller than the modern Michaels or Joann store, provided a rather extensive selection of crafting supplies and framing services, in addition to offering art classes. What Crafts & Stuff seemed to do as a way to differentiate themselves from the big chains was to position themselves as a neighborhood crafting store. With this approach, Crafts & Stuff placed many of their stores in smaller towns or parts of larger towns that weren't directly served by a major crafting chain. Crafts & Stuff focused on providing informative customer service and larger community involvement, sponsoring local arts programs and offering a variety of in-store arts classes for adults and children. And of course, as a Florida-based chain, Crafts & Stuff also featured some very Floridian touches, such as a seashell section.

As the 80's and 90's wore on, Crafts & Stuff was able to expand to 16 stores. The majority of those stores were located in Florida, with locations appearing in Boynton Beach, Cocoa, Cooper City, Gainesville, Lakeland, Melbourne, Ocala, Orange City, Orlando, Palm Beach Gardens, Sanford, St. Petersburg, Stuart, Vero Beach, and West Palm Beach, in addition to Crafts & Stuff's lone location outside of Florida (located on St. Simon's Island in Georgia). While some stores slowly closed during the early 2000's, Crafts & Stuff was able to maintain a store count above 10 locations until the 2007-2009 timeframe. It was as that point when Crafts & Stuff dropped to 3 locations from 12. I don't know what exactly caused the mass purge of stores, but the purge occurred right as the economy was falling as the recession of 2008 started, so I'm guessing Crafts & Stuff's sales may have begun to suffer because of that. Moving into the 2010's, Craft's & Stuff's three remaining stores (Boynton Beach, Palm Beach Gardens, and Vero Beach) continued to operate as a loosely related group of crafting stores. It appears Crafts & Stuff's corporate office also shut down during the store purge of the late 2000's, so the three remaining stores, while still sharing a webpage and similar merchandise, were now mostly autonomous. By 2013, the Boynton Beach location had closed, leaving Crafts & Stuff with two stores. By 2016, the Vero Beach Crafts & Stuff store was all alone with the closing of the Palm Beach Gardens store. And as we'll see by 2019, Crafts & Stuff would be no more. 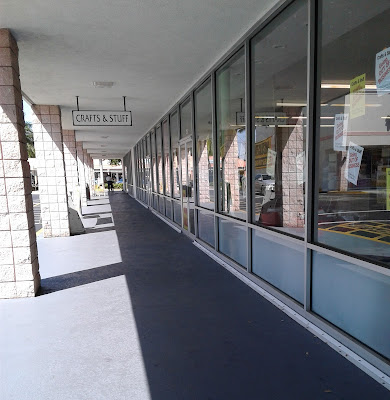 With that background history out of the way, let us begin to take a look at what Crafts & Stuff was all about. So please join me for a trip that was both my first and last visit into a Crafts & Stuff store...

Stepping up to the front walkway, here's a look across the front of the store. There certainly was no shortage of windows here, letting in plenty of natural light to brighten up this place! The natural light was working in my favor this day too, as the store had half of its lights off inside (probably as a way to save money). 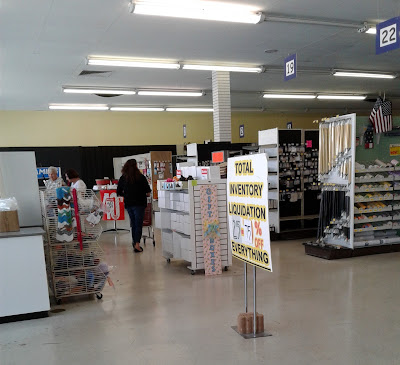 In the photo above is a look across the store's front end. The register counter is to the left in this photo, with the former seasonal department behind me. The old seasonal department was being used as a home for small fixtures that were for sale due to the liquidation. 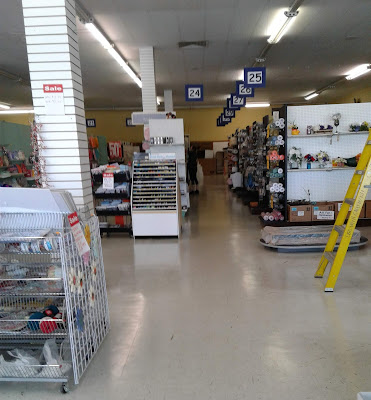 Looking straight back from the right side doors, this is the store's main right side aisle. Of what little decor there was in this store, most of it appeared to be homemade (which I guess would make sense for a crafting store). All of the aisle markers in here are homemade, featuring some good old Microsoft Word generated numbers glued to a cardboard backing. And if Walmart gets wind of these photos, these aisle markers may inadvertently serve as inspiration for a future Walmart decor package too 😀. 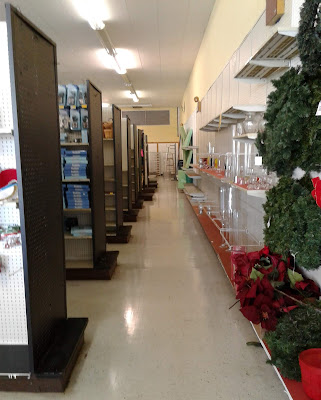 Stepping over to the right side wall now, we see the first of many empty shelves we'll be coming across as we wander through the salesfloor. Besides that leftover Christmas floral froof and some glass vases, much of this wall was barren. 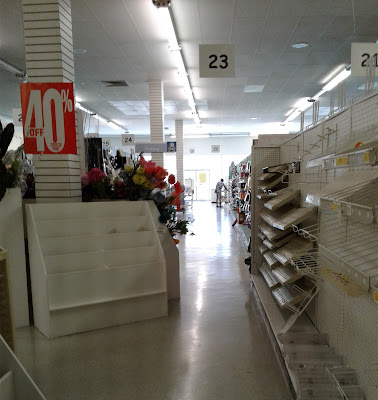 This perspective looks from the back of the store toward the right side doors, visible off in the distance among all the sun glare. 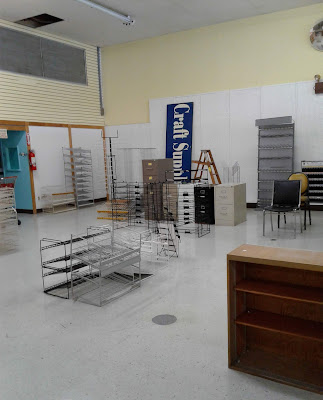 The fixture sales continued here in the back right corner of the store. I'm not entirely sure what was in this corner prior to the liquidation sale beginning, but I'm assuming it was more aisles of merchandise. Additionally, one of the only department signs I saw during this entire visit was leaning against the wall in this photo, announcing the former location of the "Craft Supplies". For $50, that giant sign could have been all yours. 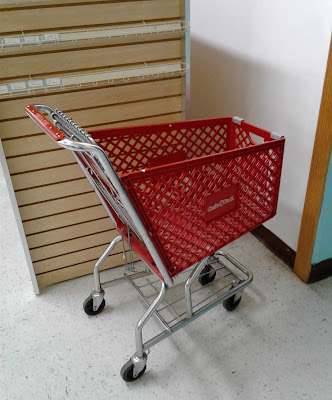 A random Crafts & Stuff cart found lurking in the back of the store near the fixture sale. 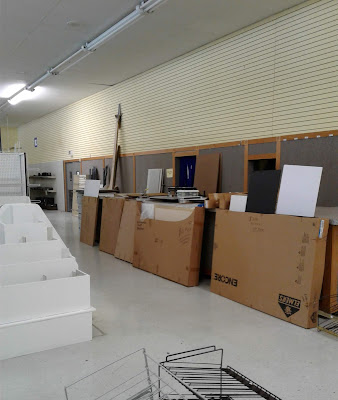 Along the back wall of the store was the framing counter. The old counter itself is hidden behind those large cardboard boxes, which contained surplus framing supplies that were now for sale as part of the fixture liquidation. 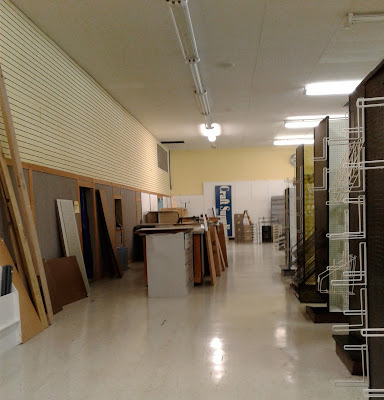 Here's an overview of the back of the store. For whatever reason, the back of this store was giving off a 60's supermarket vibe to me (even though this space never housed a supermarket), probably due to the (now painted over) wood paneling on the back wall and the rectangular air vents near the ceiling. 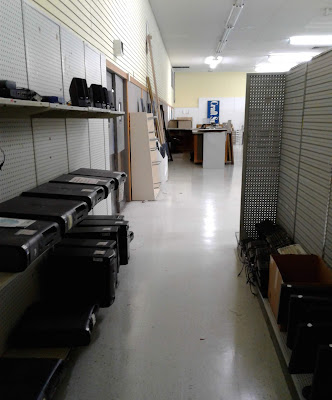 This aisle in the back left corner of the store contained a bunch of old computer equipment that was now for sale. For a mere $30, you could have bought one of these fabulous computer towers, and as an added bonus, these computers even came pre-loaded with Windows XP for no additional charge! While Windows XP was a good operating system, I don't think there are too many buyers for 15 year old computer equipment left out there, especially at $30 a piece. 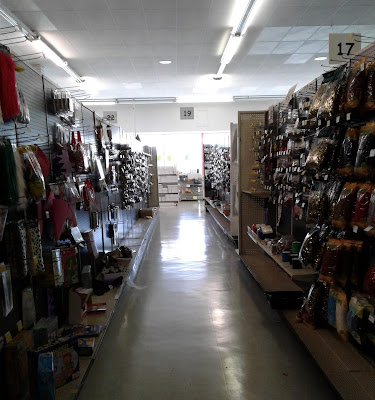 Moving into the center of the store now, here's a look down one of the aisles. It looks like this aisle was home to the pom poms, glittery things, and feathery stuff. 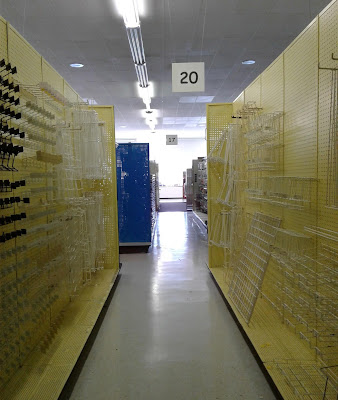 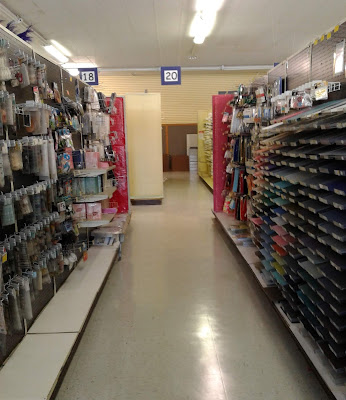 Moving closer to the front of the store, we find where much of the remaining merchandise has been consolidated to. Lots of crafty stuff left in this aisle... 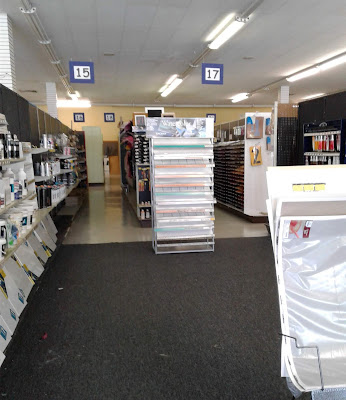 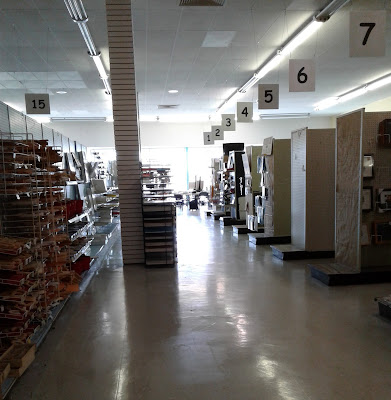 Here's a look down this store's main left side aisle, as seen from the back of the building. I like the effect of the numbers 1-7 counting down in this photo. 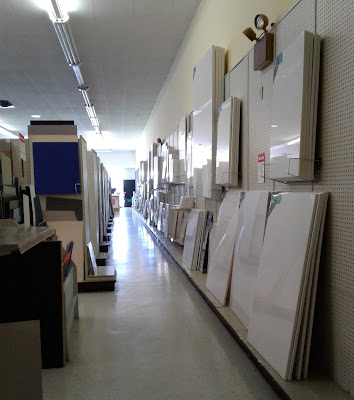 Art canvases found their home on the left side wall. 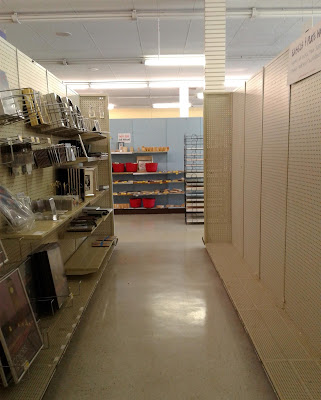 Picture frames and more nothing in this aisle... 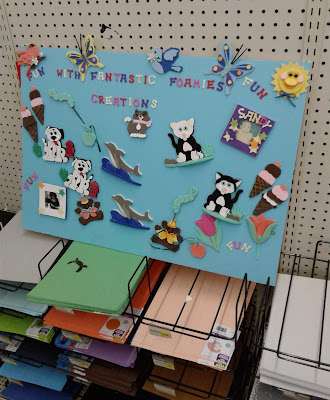 All the fun you can have with these fantastic foamies will be coming to an end soon, however, the additional 25% off discount on these foamies can make the fun go a little but further. 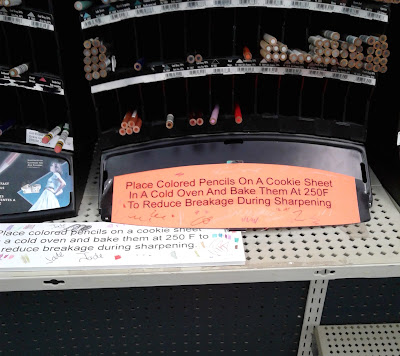 Some helpful crafting hints too while we're over in this aisle. I never would have thought to bake my colored pencils. I guess when you take the pencils out of the oven, you can either sharpen them like the sticker says, or serve them over a bed of pencil shavings with a side of crayons and a garnish of parsley. 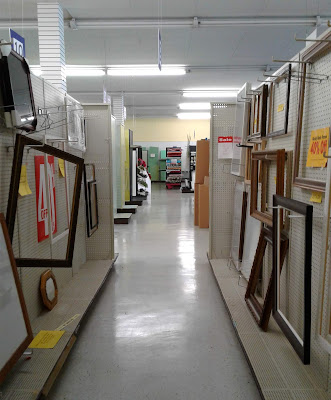 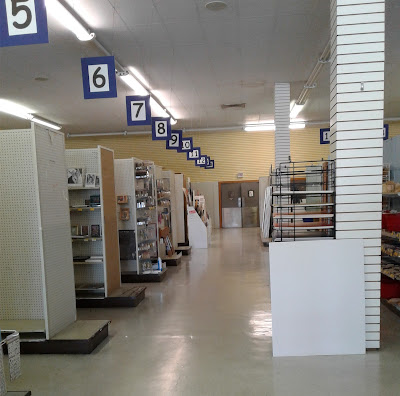 Returning to the main left aisle, here's another look down it, this time looking toward the back of the store. 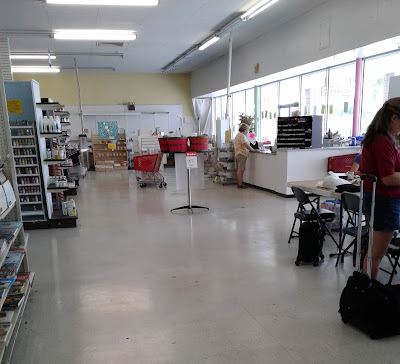 For my last interior photo, here's another look across the front end. Immediately to my right was a painting class, which was still going on even with the store's closing in full progress. Even though the store is now gone, these painting classes will continue according to a flyer I saw in the store. According to the flyer, the lady who ran the classes announced she will move them to the local Elks lodge after the store closed for good. So even with the store gone, art class will continue.

Besides the art class, the front registers can be see at that counter in front of the window, with the small fixtures for sale just beyond that.

So even though I never really thought much about the Crafts & Stuff chain until I accidentally stumbled upon its demise, here on My Florida Retail, the chain will not be forgotten. It's always interesting when you stumble across one of these chains that has gone from prosperity to practically nothing over the last few decades. As you saw from our interior tour, this place certainly gave off the feel of a locally ran art store than a chain store, probably due to the last decade or so of this place running as a semi-autonomous operation after the corporate headquarters closed. So good-bye Crafts & Stuff. You served Florida well for the last 43 years, and unlike the demise of most chains you see me cover, I can't blame Publix for this one!

AFB
Posted by Albertsons Florida Blog at 7:24 AM