Live Life With Extra Sprinkles, 'Cause I Wanna Go To Friendly's! 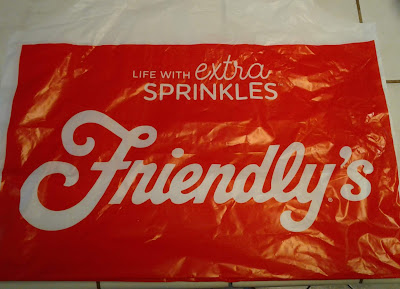 Hello everyone, and welcome to a new feature here on My Florida Retail! Today I introduce to you "Dining With AFB & Friends". While we've seen some restaurants here on My Florida Retail before, most of the ones covered so far have been abandoned, repurposed, or casually looked at from the outside. While we'll still see plenty of restaurants from those perspectives in the future here on MFR, there are lots of obscure, rare, faltering, or otherwise interesting restaurants that not only would I like to photograph for posterity, but that I'd also like to try the food from too! So that's how Dining with AFB & Friends was born, as myself and the other contributors of the blog (if they ever wish to do something like this) from time to time take you all into the restaurants with us. For our first Dining with AFB & Friends post, we'll stop by a restaurant chain that's made the news this week due to another round of closings being announced... 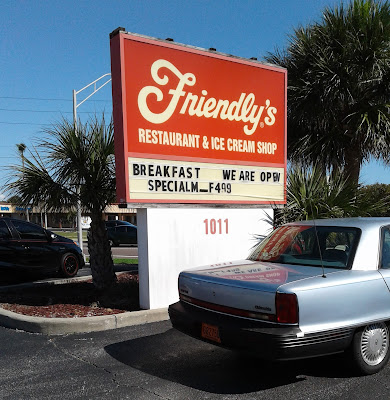 This Friendly's Restaurant opened in 1988, built in the classic Colonial building style of the chain's restaurants in the Northeast at the time (which fit in nicely in New England, but stand out quite a bit here in Florida). Today this Friendly's in Indian Harbour Beach is the last of its kind in Brevard County, as well as one of only three Friendly's Restaurants left in all of Florida (the other two being on International Drive in Orlando and the other in Port St. Lucie).

"We are open," reads the road sign on this Friendly's Restaurant on the morning of April 11, 2019. Considering how rare an operating Friendly's Restaurant is in Florida these days, in addition to last week's announcement that 23 Friendly's locations in New York and New England would be closing, the employees at this location in Indian Harbour Beach probably want to reassure locals and tourists alike that they aren't seeing things when this Friendly's sign appears on the horizon along Route A1A.

Friendly's made their way down to Florida sometime in the 1980's I believe, during a time when the company had over 500 locations in the Northeast, Midwest, and Southeastern US and was growing rapidly. Friendly's skipped their way down to Florida like many other companies hoping to find success in the sun, that their legacy in the Northeast would resonate with all the transplanted Northerners now calling Florida home. Friendly's continued to build restaurants in Florida into the 2000's, when the chain began entering its period of decline. It seemed like most major cities in Florida had a Friendly's at one time, so there were a decent number of them down here at one point. While I don't have an exact count of how many Friendly's in total operated in Florida, I can say that Brevard County had either 4 or 5 Friendly's of its own at one time (including the location we'll be seeing today in Indian Harbour Beach, as well as former locations in Melbourne, Melbourne Square Mall, Merritt Island, and possibly one at Searstown Mall in Titusville, however I couldn't confirm if that Titusville one ever opened or not). Taking that into consideration, I'd have to guess there were at least 30-40 Friendly's in Florida at the company's peak.

Anyway, while some of these Friendly's locations closed in the early 2000's or even before that, the company expedited closures as the 2010's began, many of these closings triggered by Friendly's bankruptcy in October 2011. Other closure waves trickled out after that, bringing the company to where it is today. While Florida was always an isolated market for Friendly's (the next closest locations appearing in Myrtle Beach, SC), the three random Friendly's left down here after years of shrinking are even more of an anomaly, all clustered in East Central Florida and fairly out of the way from the next closest cluster of Friendly's Restaurants. (Which is a situation that sounds quite similar to one that a certain supermarket chain tried to pull off a few years ago, doesn't it?)

With news of those recent Friendly's closures floating around, in addition to just recently realizing that out of Friendly's 174 remaining locations, only three of them are in Florida, I made a note in my mind to try to patronize my local Friendly's at some point soon. I figured today would be a good of a day as any to visit Friendly's, especially after browsing their menu online and noticing some $5 weekday breakfast specials that sounded like a good deal. Hungry and ready to go, I took a nice morning ride up A1A for some Friendly's for the first time in many years... 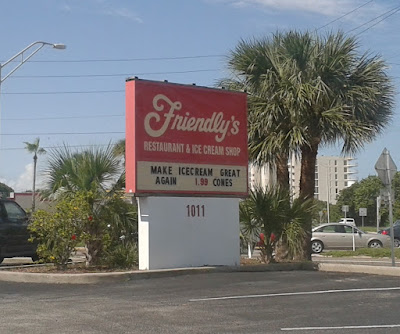 In addition to the photos I took in April 2019, I also have a few photos I took of this Friendly's location a few years ago. I posted these old photos to flickr, which I believe I left on there when I started to delete content to conform to the new uploading restrictions. Three years ago, instead of a plea that this restaurant was still open, the message on the signboard featured a little play on a famous political slogan going around as the election of 2016 neared. 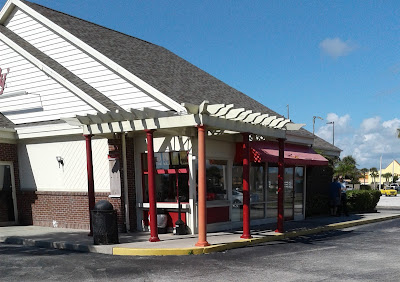 Moving away from the road sign, here's our first look at the building itself. This is the classic Friendly's building style, modeled after the Colonial architecture common in the New England area. The entrance into the restaurant is located under the red awning. 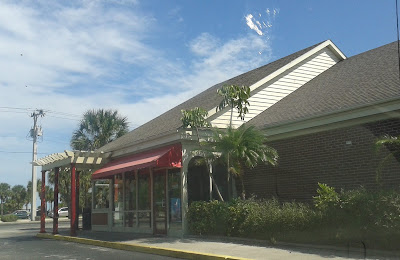 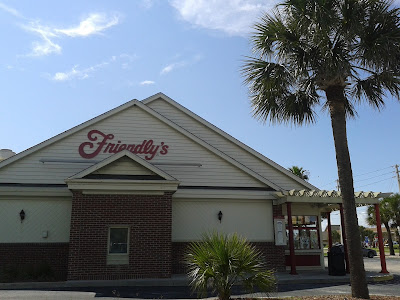 Turning our attention to the left side of the building, here's one of those signs I mentioned. This particular sign faces Route A1A, as does the main road sign. When I took this photo a few years ago, everything looked good over here... 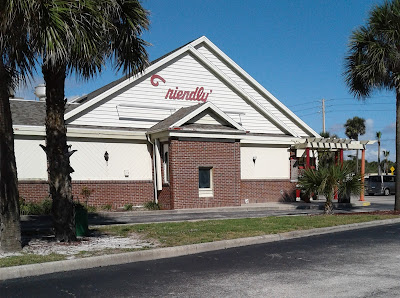 ...however, a few hurricanes later, Friendly's has been reduced to nothing more than "riendly" now. The last hurricane to have any impact on this area was Hurricane Irma in 2017, so that's how long this sign has been broken like this. There's also the off chance a passing storm could have done this damage, but it's pretty rare for a passing strong thunderstorm to whip signs around so much to where they begin to fall apart like this.

Anyway, on this side of the building we also see the now closed off drive-thru window, visible where that brick wall jumps out from the rest of the building. At one time you could order ice cream at that window, but it looks like it's been a long time since that was possible here. I think some Friendly's still offer drive-thru windows according to the website though. 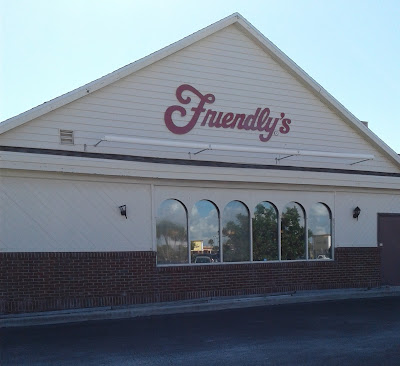 Moving around to the right side of the building, we see the other sign, which is still fully intact. Those arched windows look into the main dining room, which we'll see in just a moment. 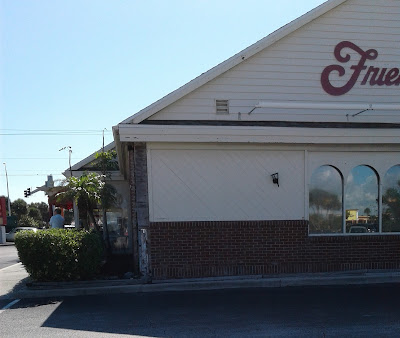 Here's a look at the front right corner of the building, the main entrance located just behind those bushes and palm trees. This building was looking a bit rough around the edges, not only because of the broken sign on the other side, but also due to the missing brick on this corner of the building. I don't know how that brick went missing, but the wooden framing of the building became exposed when the brick came down. While the outside of the building was looking a bit rough, I discovered looking through county records that Friendly's actually renewed their lease at this location. The original lease on this building expired in 2017 according to records. I couldn't find a copy of the new lease to see how long the term is, but for Friendly's to renew, I guess this place does decent business. Being right across the street from the beach in an area with a decent amount of tourists probably helps this location. Not only that, but ice cream is always nice after a day at the beach 😀 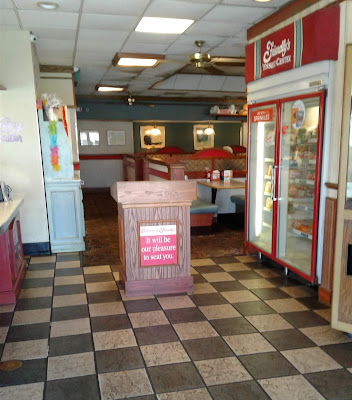 Stepping inside the restaurant, this is the view we see. Like most Friendly's, to the left when you enter is a small counter where you can order ice cream, and to the right is a cooler with prepackaged cartons of ice cream and ice cream treats for purchase. I didn't get a picture of the counter to the left (as a bunch of waitresses and cooks were hanging out behind it), but it was identical to this one. 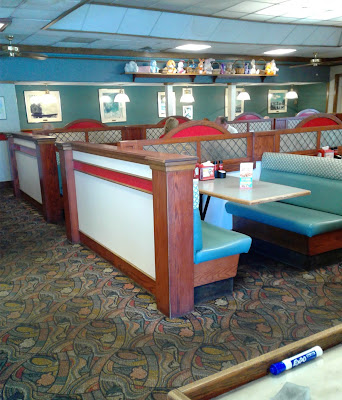 I didn't actually eat my food in the restaurant itself, opting instead to order my food online and pick it up to go. However, as I waited for the cooks to finish preparing my order, I was able to get this picture looking into the dining room. It doesn't look like much has been updated in the dining room since this place opened in 1988, but the building looks much better maintained on the inside than it does from the outside. I personally don't care if the furnishings are old, just as long as they're clean! Friendly's also had all of their Easter decorations out too, some of which you can see up on that shelf along the restaurant's back wall. 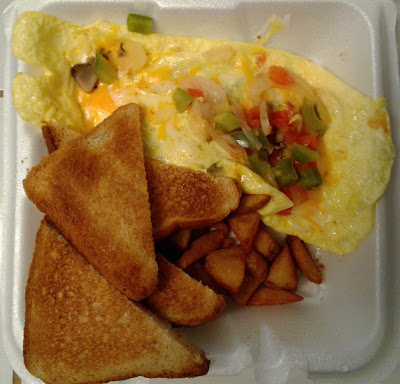 Now that we've seen the restaurant itself, it's time to eat! For my late breakfast today, I ordered the vegetable omelet with home fries and wheat toast. Since Friendly's takes 50% off select breakfast entrees during the week, I got all of this for only $5 plus tax - a great deal I must say. The omelet was very good too. Friendly's didn't skimp on the vegetables in the omelet either, with plenty of mushrooms, peppers, onions, and tomatoes cooked into the egg, as well as garnished with more vegetables on top. It was a very filling breakfast, and well worth $5. One of these days I'll have to try the lunch menu, as there were some good lunch specials I saw online too. I hope the Indian Harbour Beach Friendly's sticks around for a while, as I was quite happy with my breakfast! 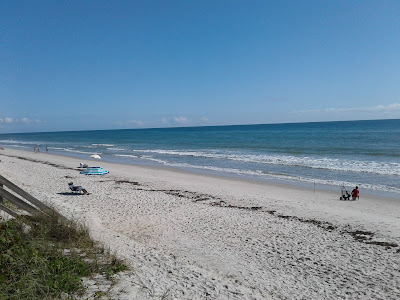 As I said before, the Indian Harbour Beach Friendly's is located directly across the street from the beach. It was a nice day so I hopped across the street to Canova Beach to see what was going on over here, as well as grab a few photos to include with this post. 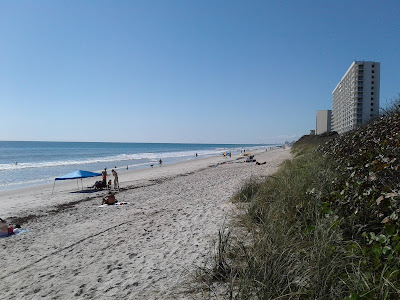 With temperatures hitting 90 degrees for the first time in 2019 this week, the beach had a bit of a crowd for a Thursday morning. Come this weekend, there will be people everywhere here!

So I hope you guys liked this new feature. This isn't going to be a common one (at least from me - I don't know if any of the others will pick up this feature up more often), but I might do a Dining with AFB & Friends every once and a while to keep things interesting.

Anyway, that's all I have for now. I'm slowly progressing on getting the next portion of the Melbourne Sears closing series ready, so hopefully that will be coming up before too long!