Could it be? Was Shopping A Pleasure here before? 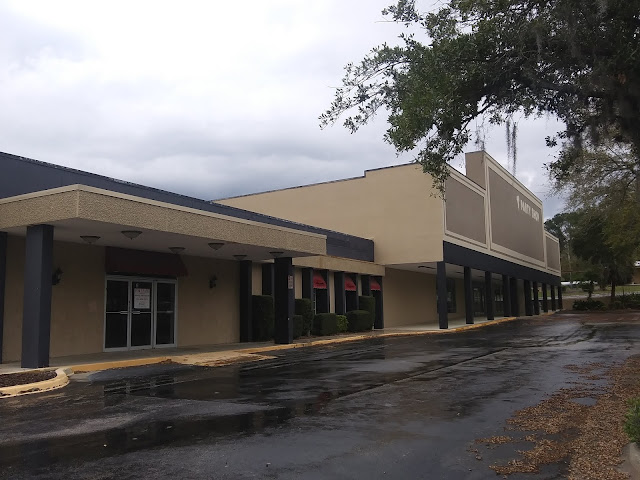 What is this exactly? We know from the look of it that it is a former Party Store. This is actually two buildings put together to make one small strip center. While I have focused a lot of my attention on Florida's former Albertsons store locations (in fact former store #4314 is located diagonally across the street from this place), I haven't taken the time to address this little gem located literally minutes from my home! For the longest time I thought maybe this building was an old drug store, like Eckerd. After all, this part of Gainesville was the area that housed the original Gainesville Mall. The Gainesville Mall to my knowlege contained stores such as Sears, Maas Brothers, Woolworth's and various other small specialty stores. 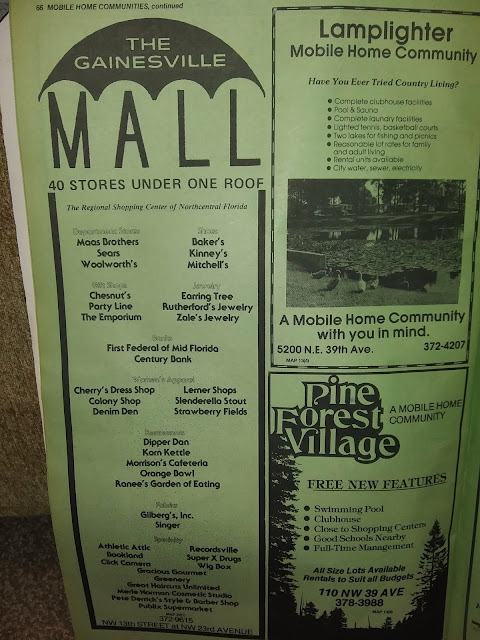 Last year I stumbled upon this above Gainesville City Atlas from 1979. I acquired this atlas from an old home on the outskirts of Gainesville that a real estate friend of mine was renovating and I was helping him. Besides this neat find I also acquired several Albertsons grocery store bags (much to my delight- I know I'm an Albertsons fanatic!) But what I saw interesting in the city atlas was an ad for the Gainesville Mall which I thought was pretty cool!

With all that aside, let's get right into the subject of this post. I'm almost 100% sure what I'm about to reveal in this post is the remains of a former supermarket of a certain chain which just may very well be located in Polk County, FL. Anyone wanna take a guess?

Here's the walkway leading up in front of what I remember being 2 stores; Goodwill Industries on the left, and The Party Store on the right. But what original tenant was occupying this building during the 60's, 70's, and 80's. Could it have been a certain store that uses the color green a lot, and who's employees wear green aprons or green shirts? I think I might be getting onto something. I will say this; the wide awning ceiling going over the sidewalk reminds me of a George Jenkins' enterprise which sold food. 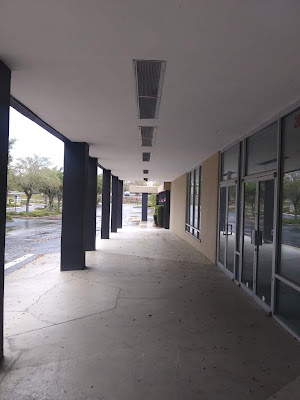 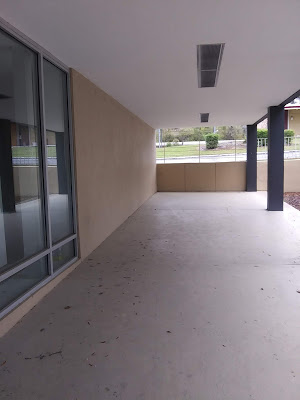 Looking inside; tiled floors and some support columns and an old looking air diffuser you might see in an old Kmart or perhaps that Polk County chain which may or may not have operated here? 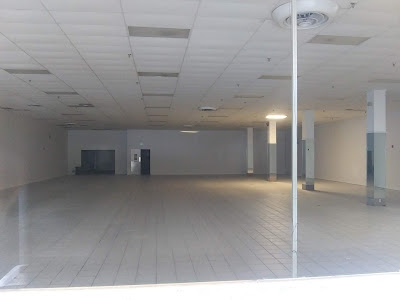 By the way, this is what used to be The Party Store, or what I would simply refer to as the 13th Street Halloween store, as I have shopped here several times in the past 10 years in the month of October for Halloween costumes.

This below photo was looking into the entrance door to the abandoned Party Store. 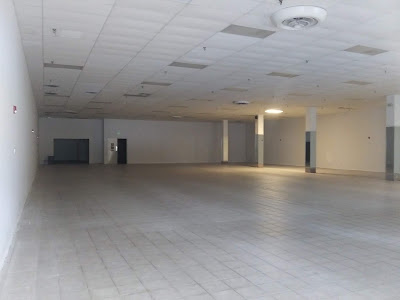 Here's another look down the walkway at an angle showing the windows to the  Party Store. 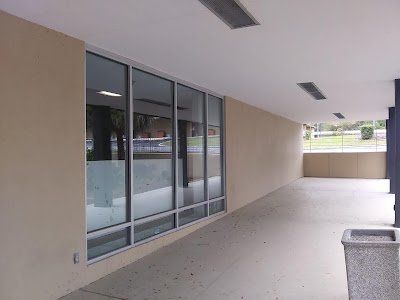 Taking a step back for a photo, here is what the entrance doors look like for Goodwill Industries' store and The Party Store on the left and right respectively. When we look into the doorway at left, things get pretty interesting! 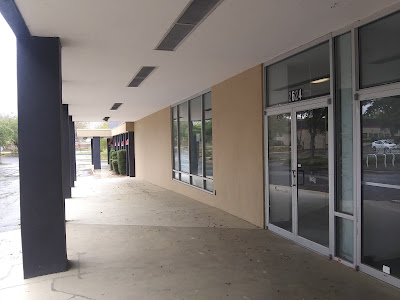 Hey, look at that! Doesn't that floor pattern look familiar? 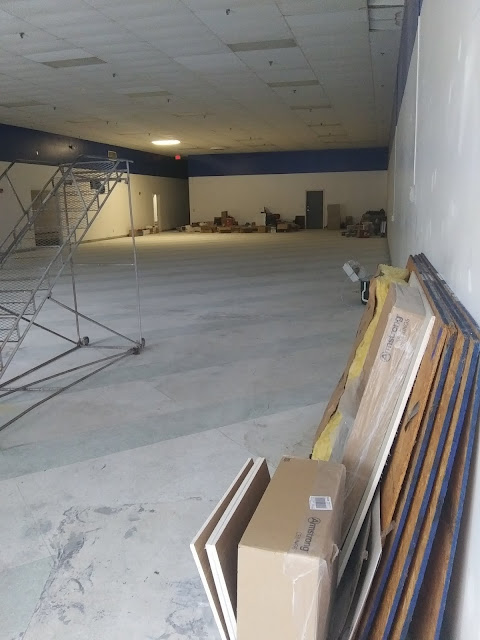 I'm almost certain now that this place was an old Publix from way back. Those white with green stripes tiled floors are exactly like the ones used in Publix stores from the 60's and 70's, like this store 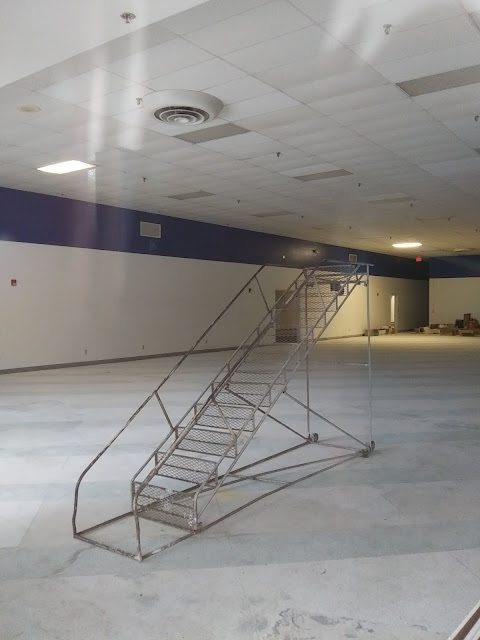 Well, I'm ready to board that plane that takes me back in time, but there's no plane. A sad reality, that we can't travel in time. I hope we can one day. I would like to have been able to have seen Gainesville back in the late 70's, when this Publix was still open and when Skaggs Albertsons #4314 had just opened nearby!

below is another look at the space that used to be occupied by Goodwill. It never occurred to me from the tiles that this may have been a Publix grocery store. This building overall is pretty small for  a supermarket. 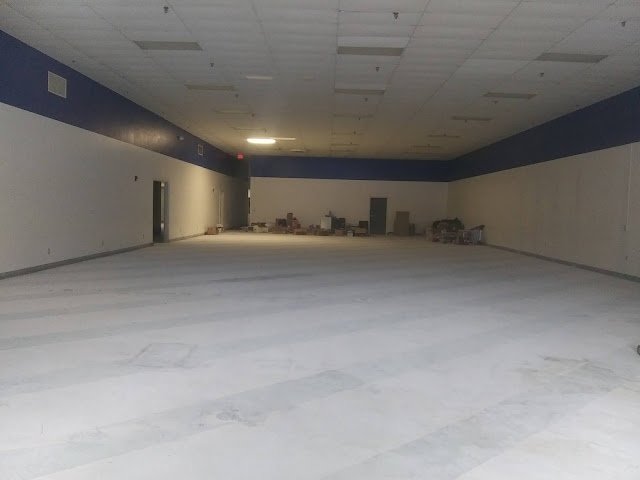 Walking over to the left and looking back at the main building, the facade even gives indications that this may have been an old 60's wing style Publix. 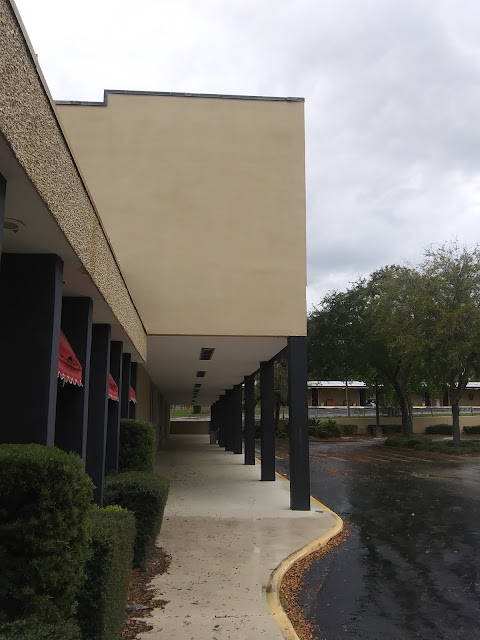 I need to give up on these inside car shots. They never work well. I think at one point located at the bottom part of this stucco facade were the words "Where Shopping Is A Pleasure". 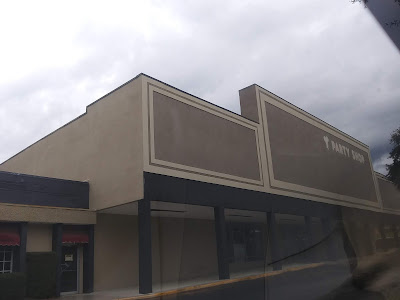 Moving over to the left is another place of interest. Up until 2012 this portion of the building was home to Piccadilly Cafeteria (formerly Morrison's Cafeteria). Cafeteria style restaurants became pretty unpopular from what I can tell. Its possible that food waste and price could be attributed to the decline of this type of restaurant. I came to this Piccadilly one time back in 2009, and while the food was decent, it wasn't anything to write home about. On top of that, these cafeteria type restaurants where you choose what you want on your plate and pay for each item added, your tab can add up really fast! 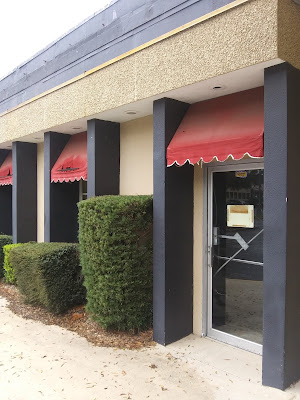 Above is an emergency exit I believe for what used to be Piccadilly. 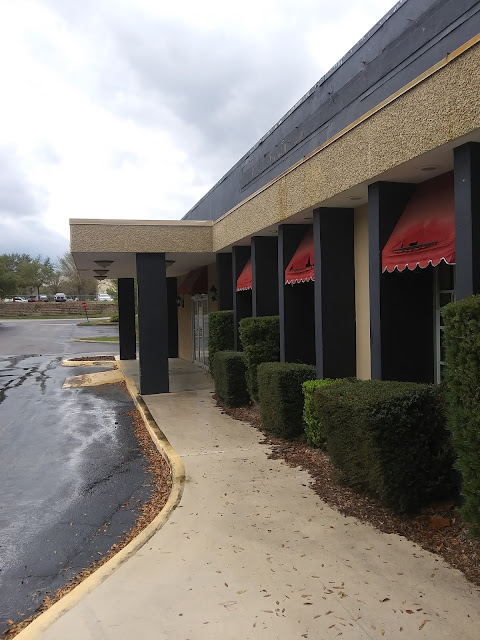 There's the former Piccadilly from an angle looking at those red awnings over the windows. That is part of what makes this look like a restaurant, but boy is it abandoned! 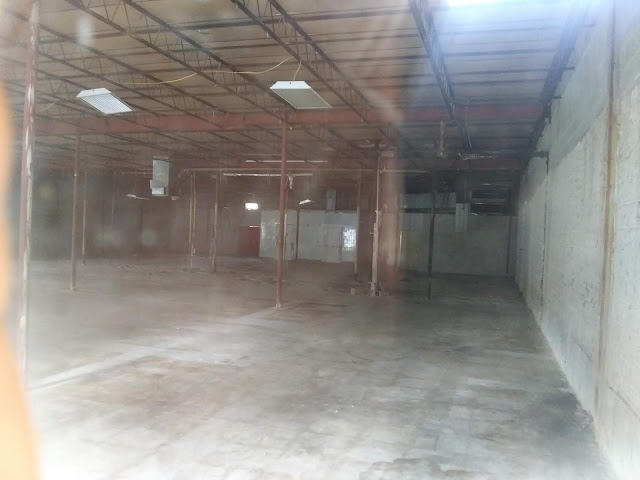 Looking inside the emergency exit door, it has definitely been a while since a restaurant operated in here. I'm not sure what the future holds for this little strip center of this restaurant space. Over the past 10 years 13th Street in Gainesville has changed a lot. Albertsons closed, Walmart closed and relocated, the furniture store in front of Albertsons closed recently. Redevelopments have occurred in this part of town, but there is still just a little bit of blight, namely the piece of property I'm looking at in this post. 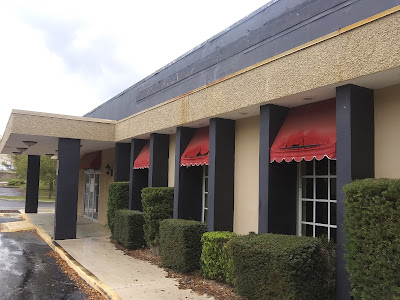 Here's a better shot of the front which used to house the sign Piccadilly Cafeteria. 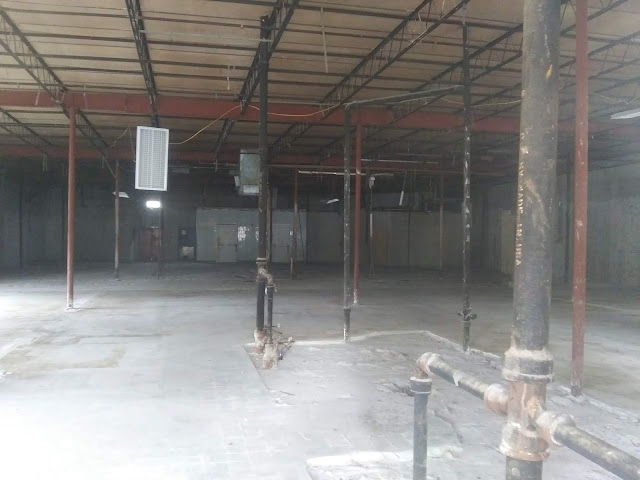 Eeek! Somthing looks creepy and unappealing about this picture! Ripped out drop ceiling, and exposed plumbing pipes are not exactly nice visuals when imagining a restaurant used to be in here with people seated around tables chowing down. 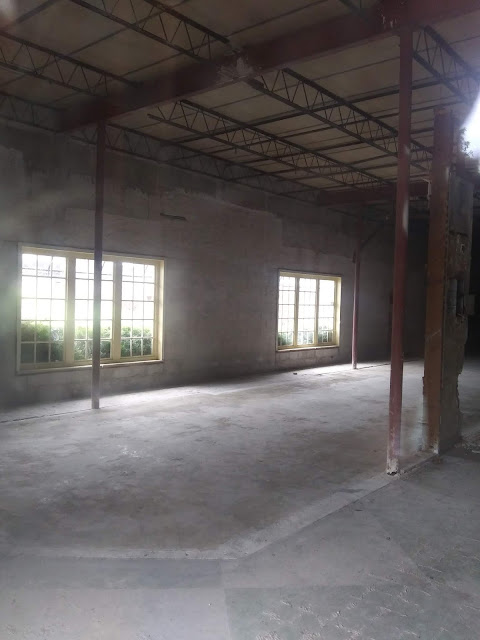 The windows at left, made this place feel a little homey when it was still in business. They remind me of windows you'd have at home while seated down for a nice home cooked meal in the dining room. 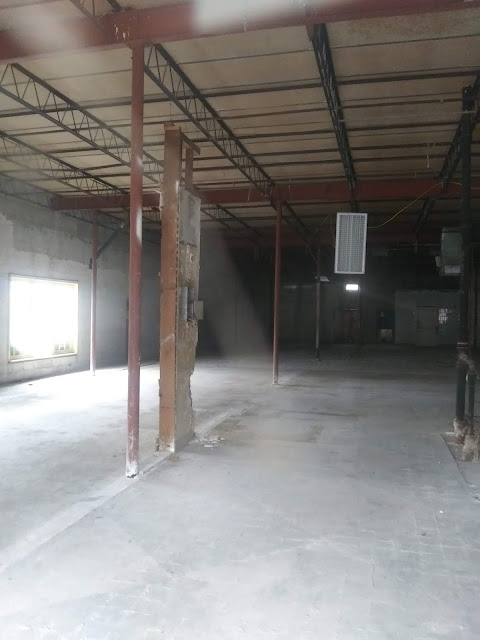 A place where a wall once stood reveals a barren electrical panel. No need for any electricity in here for now.

Well, well. There is our Piccadilly Cafeteria still in business back in 2012. This photo is courtesy of Yelp.com.
Someone posted this not long before the place closed. 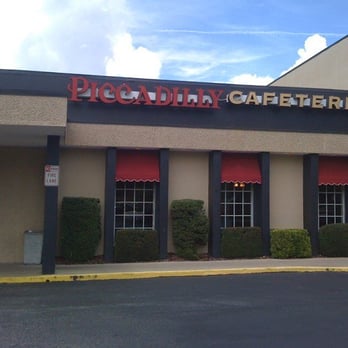 Here's another couple of quick photos of the original facade of what used to be (and I'm pretty sure) was a former Publix wing style supermarket. 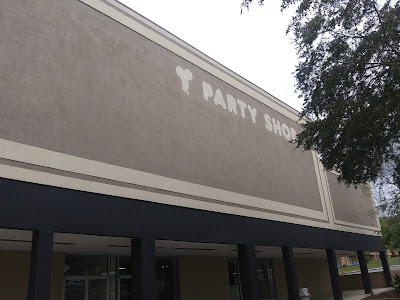 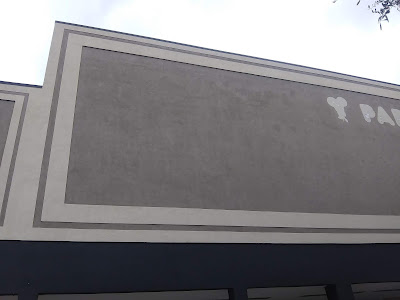 Here's a backed out view of the former Piccadilly (Morisson's Cafeteria) from the parking lot. 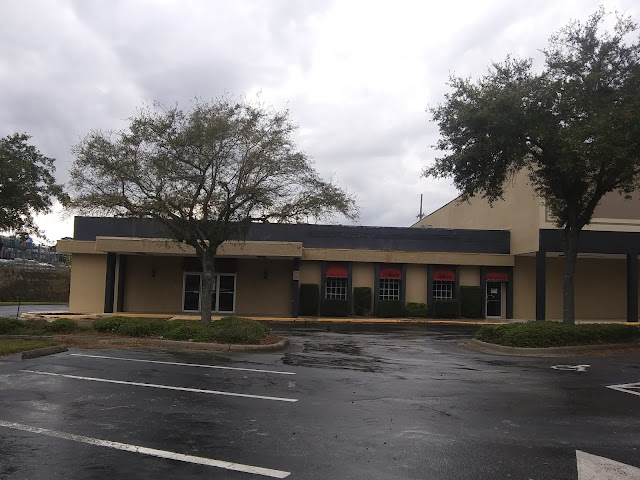 From the time since the original tenant of this building has left trees were planed in grassy islands in the parking lot. These Laurel oaks have grown pretty high, obstructing the view of the main building facade. The parking lot lighting looks as if it was also updated during the past 20 years. 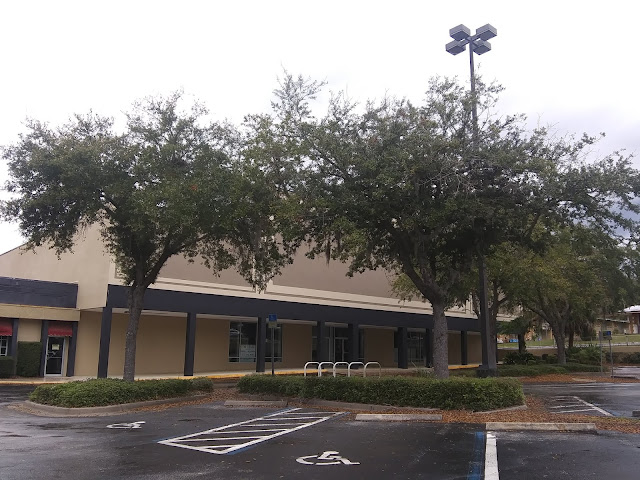 After doing a little photo searching I discovered this Gainesville Publix photo C/O Florida Memory from 1971. After looking at it closely, I realized this was the Gainesville Mall! And even more interesting what that the building which I have always known as Goodwill and the Party Store previously housed what was probably the original 13th Street Publix, long before Publix #537 opened in 1996 at the corner of 39th Ave and 13th Street.

Those are some interesting looking Parking lot light posts! They look like flying saucers on top of a pole. The buildings which made up the Gainesville Mall in the Background are now the site of the current 13th Street Lowe's store in Gainesville. There is sloped retaining wall going alongside the Lowe's even today in roughly the same place. That retaining wall was a giveaway to me that this was the original Gainesville Mall Publix store! 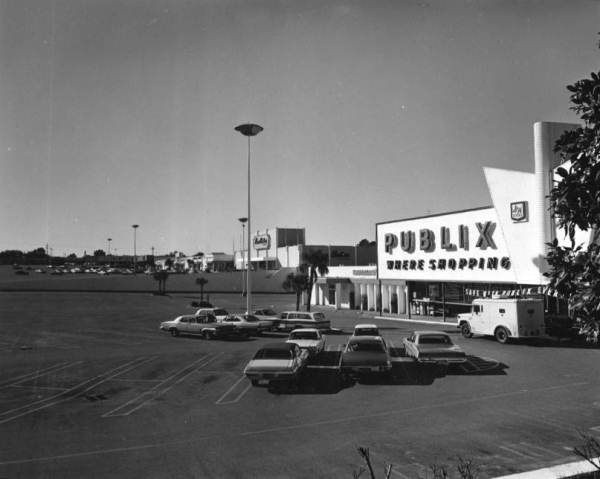 Now that I have shared my exciting discovery with everyone, it is time for me to go (literally to work, as I wrap up this post). I hope you enjoyed this post. It's surprising to me that this original Publix building still stands here over 50 years later! Personally, I'd like to see Publix bring back these retro wings style buildings to some of their future stores. I think they would make for a nice treat!

Until the next time I get around to doing a post,
YonWooRetail2