You ever walk into a store, and you can just..... feel it? In the air, in your nose, on your skin. Not a smell of rot or decay, not a feeling of spiderwebs or built up dust. Not even really humidity, though that probably plays a part. But it's there, and it's so very noticeable. A pervasive feeling of age, of, I hesitate to say "antiquity" since we're dealing with something from the 80s at earliest, but that word feels right. It's a feeling of a quickly rehabilitated store, of slightly shoddy paintwork, of faded and cracking plastic, of uncleand and unshined floors wearing every scratch, whether it be from unruly customers or from construction crews.

This is the feeling that I felt in unmistakable spades when I opened the no longer automatic doors to Appliance Stockade in Merritt Island, FL. It's a smaller store, fashioned out of the awkward, left-over middle bit of a long former Wal-Mart (that is exactly how it is spelled, corporate restyling be damned) after Big Lots left and it was carved up between Appliance Direct on one end and Harbor Freight on the other. When I first visited this spot, it was on one of my very first "retail expeditions" where nearly an entire day was dedicated to running my dad around an area so I could feed my new hobby. At that time, I was hunting for a highly visible vintage logo Big Lots label scar. 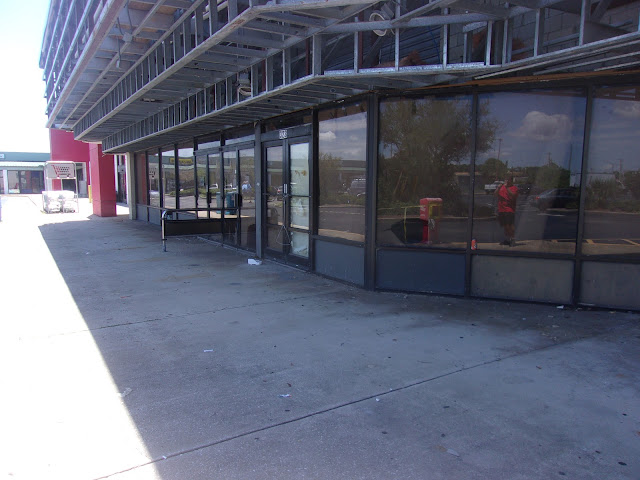 One could of course, imagine my dismay when I found it in the middle of construction work, completely stripped to the bare metal skeleton. While it does look, pretty ahem metal, (yes, booo), at the time I assumed it meant the facade was about to be ripped out entirely, which in the end thankfully turned out untrue. 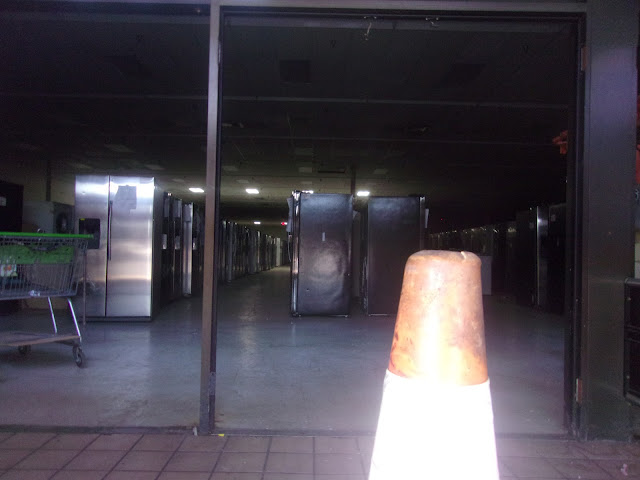 While an unhelpful orange cone has eaten my camera flash, we can still see a proto-interior of what would soon become Appliance Stockade. When I photographed this back in July 2018, I thought it was just overflow storage for Appliance Direct, but as we'll see later, minus the cone and stray Publix shopping cart, this was likely just setup for Appliance Stockade's opening day.

But enough waffling about with photos of a dim, dark, unopened store from a dreary July afternoon, let's move to the much newer photos of Appliance Stockade in operation. 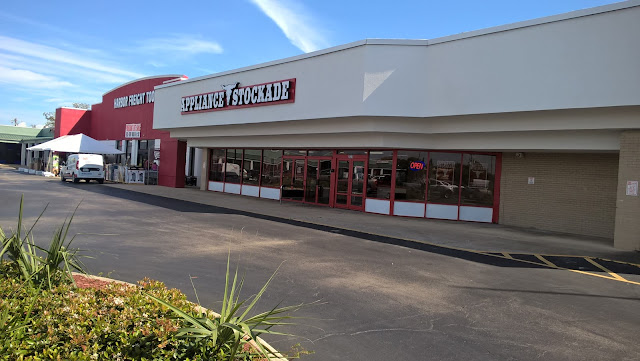 Sorry for the tilt, but this is the best shot I ended up with of the overall exterior. Much to my joyful surprise, Appliance Stockade did not rip down the old Wal-Mart facade for a flat faced new one, but instead quite lovingly rebuilt it. While this of course did obliterate the existing Big Lots label scar, I think it's a fair price to pay to see this old Wal-Mart "staggered rectangles" style facade preserved. For a store located in Florida, Appliance Stockade follows a very western theme, for what little branding it has. 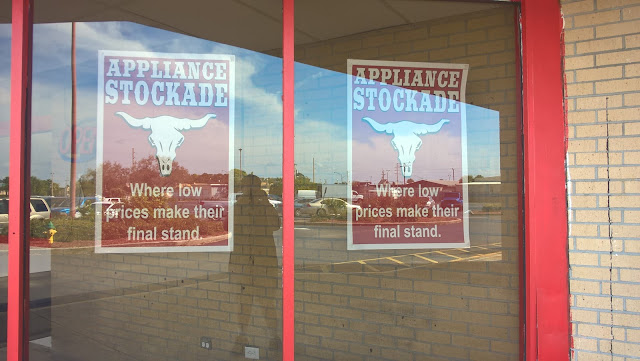 These paper fliers taped to the glass brand Appliance Stockade as "Where low prices make their final stand". Slogans like this, as well as the ever-present skull motiff, gave the building a slightly Ollies-like feel, that is, a feel of a store that doesn't take itself so seriously, unlike the modern incarnation of Big Lots.

Getting closer to the doors, we find the very much non-functional handicap automatic-door button. Having this sitting here, non-operating, probably breaks some sort of law or regulation on disabled accessibility, but who cares, not like this place doesn't have automat-.... oh. I didn't get a photograph of it, but the doors at Appliance Stockade are all manual, presumably any automatic functionally was either never there or was just dummied out by age. Anyways, let's step inside.

Imagine any one of those for me, the rest stops and McDonalds on long road trips are particulary potent, as well as the weird little beaches like the ones next to docks, at least for me. Just picture it. Got it? That's the feeling I had in this vestibule. It's a place designed to funnel large amounts of people and hold shopping carts, in a store that is now both very low traffic and entirely devoid of shopping carts. (Though it would be a great place to store some dollies or something to help people move appliances. Just a thought) 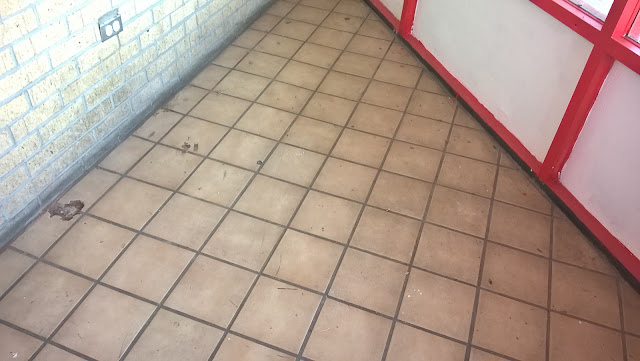 You know how I mentioned this tile being the best flooring in the store? Yeah, that doesn't necessarily mean it's in good shape. These gouges are likely the result of clumsy movement of appliances or other equipment, which I know was stored in the vestibule before opening. 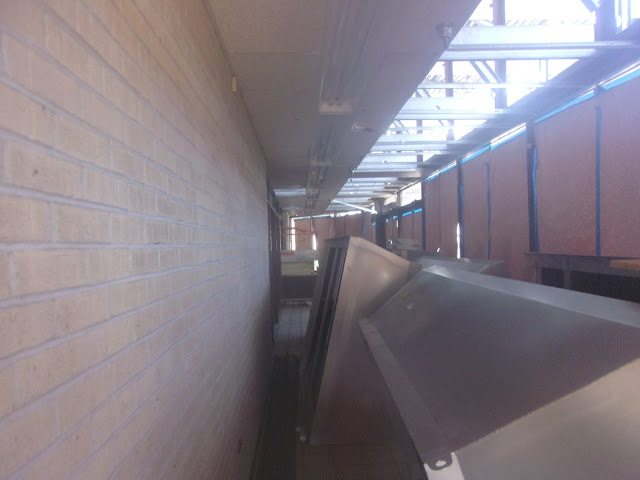 I know, because I photographed it back in July! While the majority of the vesitbule was covered in boards and paper, age and clumsiness had allowed me peaks inside, include this shot from the far left side. All this stuff being crammed in here, and then the requisite "creative" movements to get it back out without breaking windows is probably what put the gouges in the floor. General cheapness, plus the fact that "Wal-Mart 1987"isn't an available tile choice at Home Depot likely influenced the fact that the damaged tile was left in place. 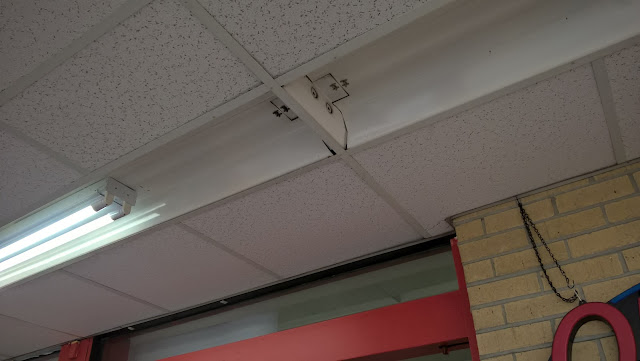 I was initially going to comment about the fact that Appliance Stockade cheaped out so much that they decided not to put bulbs back in every light fixture, before realizing that despite leaving the original light fixtures in place, they've crammed newer (presumably LED) fixtures into the old ones. Bizarre. 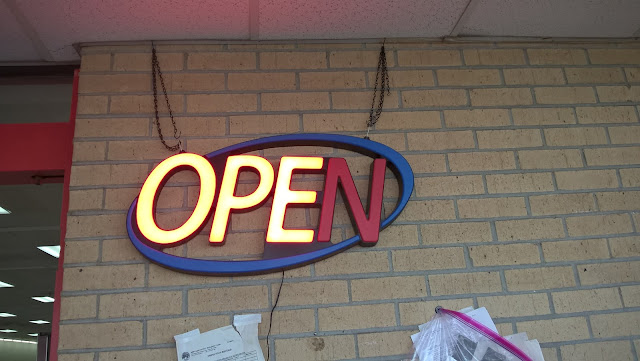 Our last photo of this wonderfully vintage vestibule is a shot of the cheap little "OPEN" sign, which you'd think would be mounted on the glass but what do I know? It's quite elegantly mounted too, premium dangling cable there. The hilter-skilter paperwork at the bottom of the shot is permit paperworkleft in place from when they were renovating the place for re-use. I'm not sure why it's been left here, but it sure adds to the feeling of quick-and-dirty that this place exudes.

But before we enter, traveller, herald this warning. This very large banner whose word count outdoes some of my smaller school essays outlines Appliance Stockade's 24 hour return policy and 1 year functional parts/labor warranty, and the many things it does not cover as well! I guess it needs to be well communicated, and this is better than an employee taking 10 minutes to rattle it out after purchase, but it's a little bit imposing. Also, "but not limit of items not included" is an interesting word salad of a sentence fragment. 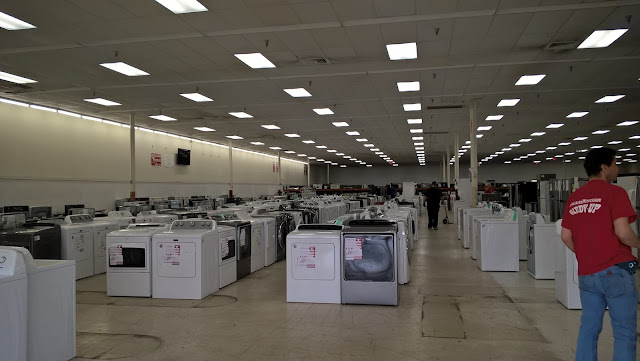 There's been a bit of appliance shuffling, fridges have been moved from the front of the building to a bit farther back, but the basic 2 appliances wide lines style has been preserved. However, let's address the elephant in the room, at least to me. Can you spell "Shelving Scars"? 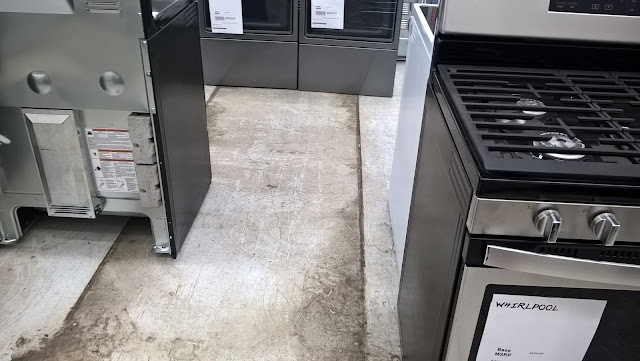 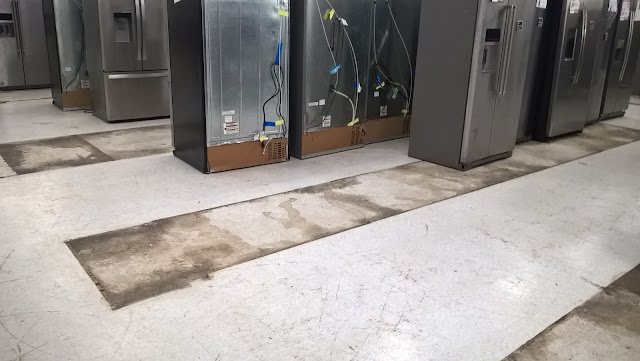 I don't believe I've ever seen shelf scarring as severe as this. Seriously, you could map out the entire floorplan of a Big Lots of yore with minimal effort. I don't think this floor has ever been properly, heavily deep cleaned (though with all the scratches across almost every square inch of floor, you might as well replace it). I kept expecting to find a price tag or receipt or flyer from the Big Lots days, forever stuck in place by decades of under shelf grime. 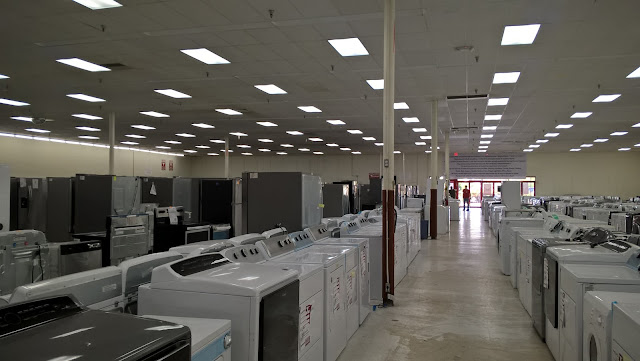 Here we are transferring to  some general photos I took of the store's interior. Appliance Stockade sets itself aside from Appliance Direct next door by being a "manufacturer's returns" store, or the appliance store equivalent of a bent-and-dent store. It's stuff that's been returned to the manufacturer under warranty or through some service program, and then bought by the pallet load by Appliance Stockade. They then fix them up (at least internally, not necessarily cosmetically) and sell them on at reduced prices. 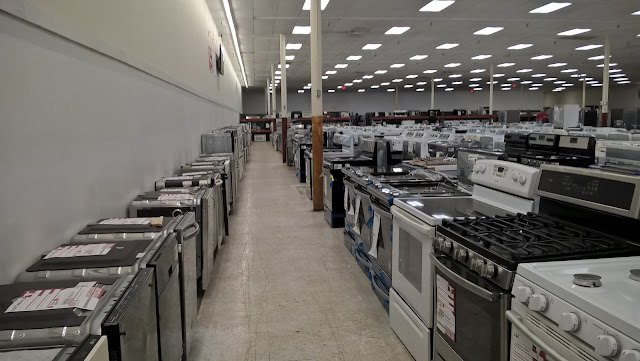 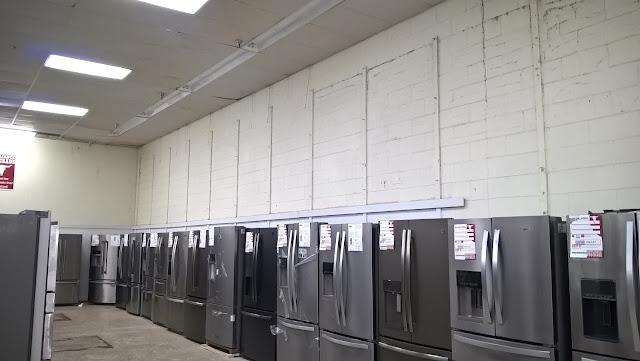 Maybe I'm just behind the times (don't answer that), but look, they even got stainless steel fridges! These are all nicer than what I have at home, at least. Admitably, none of these have Samsung's overstock smartphones jammed in the water and ice machine slot, which seems the newest trend, but all of these look completely serviceable. 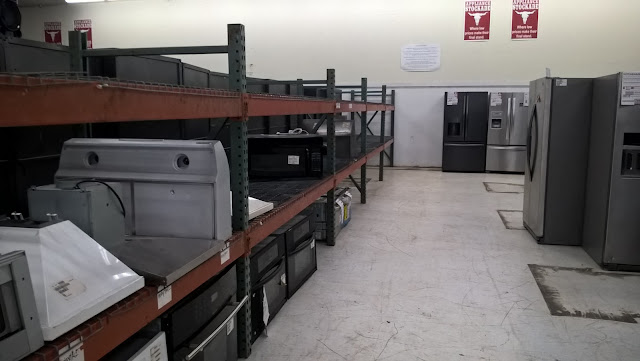 These very industrial looking metal shelves line the back of the store, seperating the "showroom" from the backroom storage. This is the right set of them, which as far as I can tell is mostly parts? That's what it looks like at least. The left set of shelves (they're seperated by a gap that leads to the backroom) holds mostly microwaves. 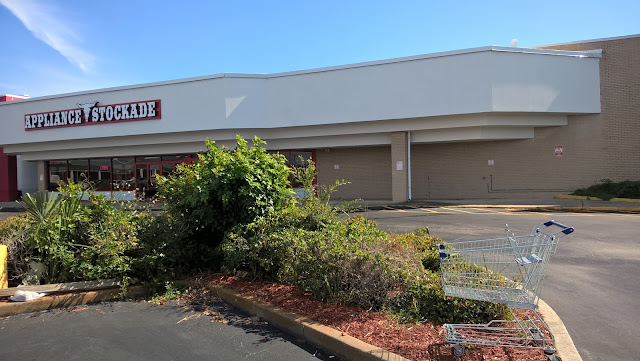 To wrap up our post, we have another picture of that classic staggered rectangles facade on the outside. By the way, Appliance Stockade definitely does not have carts, the one in the photo has just wandered over from Harbor Freight next door. I have to say however, despite the fact that it's been cut up and remodeled, this old store still has....