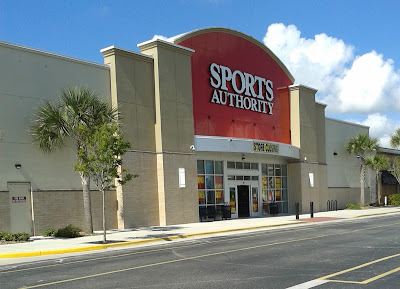 Merritt Square Mall originally opened in 1970, and as of 2019 is anchored by Sears, JCPenney, Macy’s, Dillard’s, Cobb Cinemas, Ollie's Bargain Outlet, and Books-A-Million. Merritt Square’s Sports Authority store was one of the newest anchors added to the mall, opening on August 10, 2013 in a space that previously housed a few smaller storefronts. This Sports Authority store lasted until July 2016, when all remaining Sports Authority locations closed during that chain’s bankruptcy liquidation. In October 2018, Ollie's Bargain Outlet would open in this space. For more details on the history of this mall, please click here! 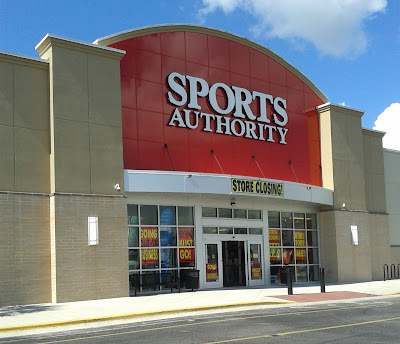 Here is a close-up shot of the former Sports Authority’s entryway. As you may recall, back in 2016 I managed to photograph the two other Brevard County Sports Authority stores as they liquidated, located in Melbourne and Viera. This store had a similar feel to the Viera location, but a much different layout as this store was a bit smaller. As YonWooRetail2 commented, "I actually miss Sports Authority. They had a great selection, just the prices weren't anything to rave over." 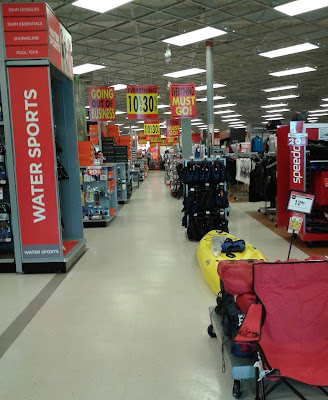 Heading inside, we find ourselves on the left side of the store for this first photo. On this side of the store was the location of water sports and fishing equipment as well as the shoe section, which is visible in the distance. 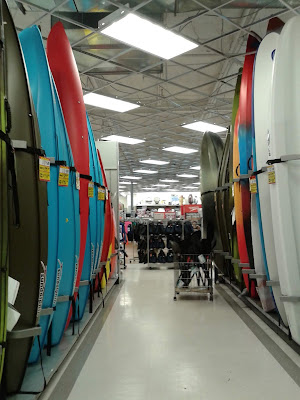 A photo from one of the aisles in the water sports department. I thought all the boats standing up straight made for a neat effect in this picture. 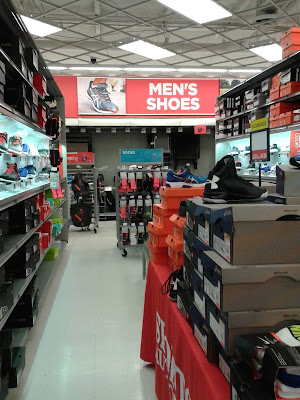 This photo shows a scene from inside the shoe department. The signage and decor you see in this store was the last design Sports Authority used before their liquidation, which had been in use for quite a while prior to the liquidation now that I think about it. 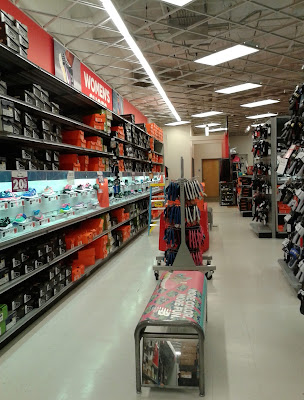 Looking down the store’s left side wall, as seen from the shoe department. The mall corridor is located behind that wall you see in the distance. 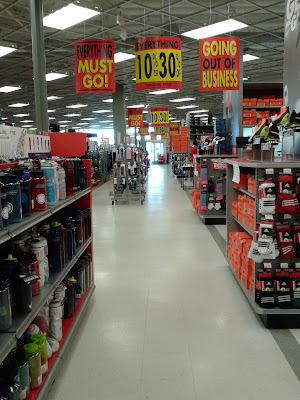 Looking back down the left side aisle, with Sports Authority’s exterior entrance visible in the distance. 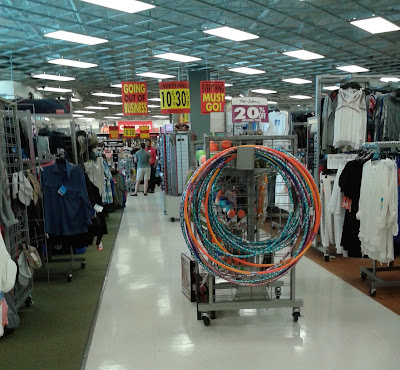 A random shot down one of the aisles in the store’s clothing department, which took up the entire center portion of the store. While browsing the deals on clothing, you could have also scored yourself a deal on a hula hoop too! 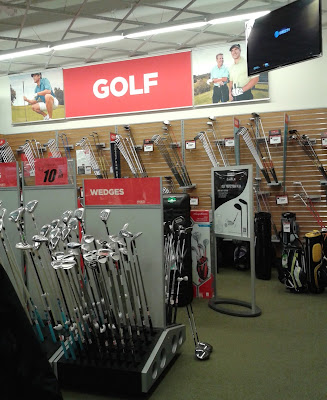 Golf equipment was located in the front right corner of the store. Some Sports Authority stores (like the one in Melbourne) apparently had rooms where you could practice your golfing skills. Since the Merritt Island store was much smaller, it lacked some of the deluxe features like that putting green. 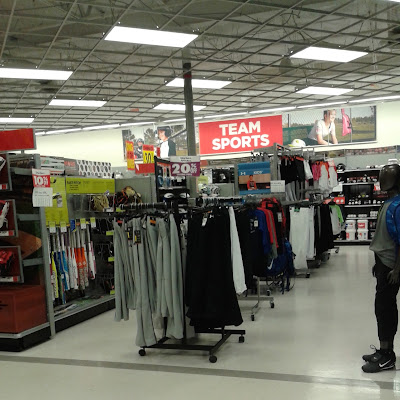 The next department back from the golf equipment (where we left off last time) was team sports, home to the baseball, football, soccer, basketball, etc. equipment. 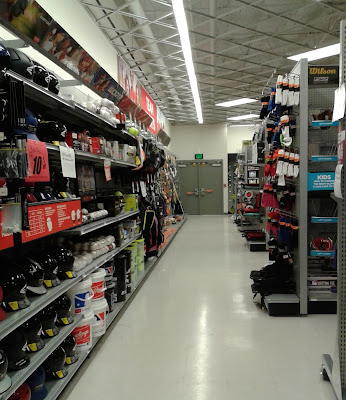 Here we’re looking down the store’s right side wall, from the team sports department toward an emergency exit at the front of the building. I visited this store rather early in the liquidation process, so there was still plenty of merchandise left as the discounts weren’t all that deep yet (as you can see from that 10% off sign on the shelf to the left). 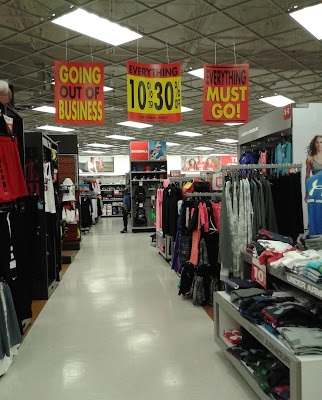 Another view of the center store clothing department, this time looking toward the right side of the building. 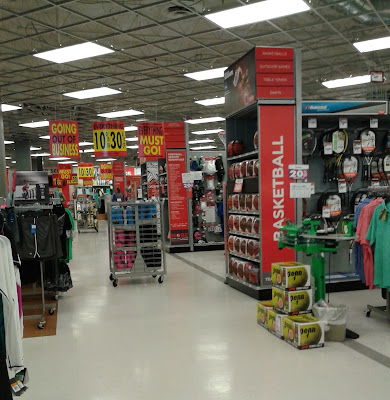 A look down the main right side aisle, which separates the clothing departments from the aisles of merchandise in the team sports department against the wall. 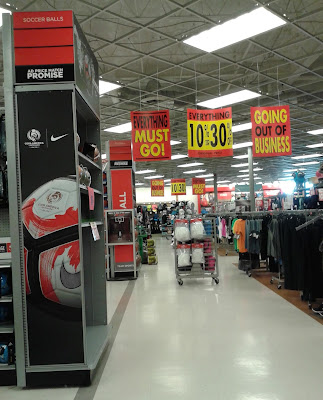 The right side main aisle again, this time looking toward the front of the store and the exterior wall. 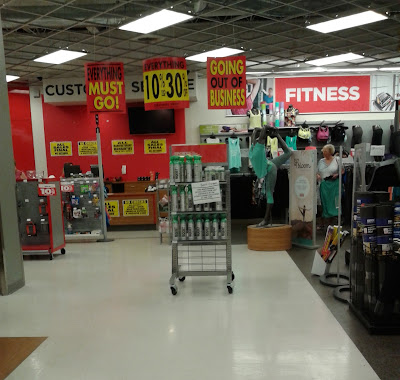 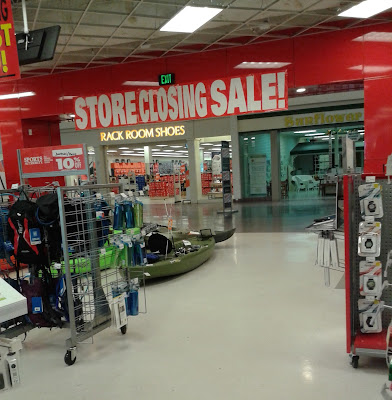 Lastly for the interior photos of the Merritt Square Sports Authority, here is a look toward the store’s mall entrance. The register counter is just out of frame to my right. 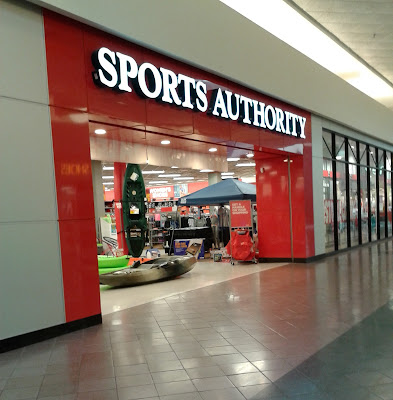 Stepping into the mall corridor, here’s what Sports Authority’s mall entrance looked like. When I visited Merritt Square Mall in May 2018, nearly 2 years after this store closed, I was able to peek through some gaps in the paper covering these windows. Inside the old Sports Authority were two guys working. It looked like they were ripping up the floor, but whatever work they were doing appeared to be stripping down the space to make it more appealing to a new tenant. Little did I know then that they were preparing this space for the arrival of Ollie's Bargain Outlet, although we'll see much more from Ollie's in a future MFR post.

Back outside once again for a final overview of the former Sports Authority store, with this photo also showing Ruby Tuesday, the main mall entrance, and part of the JCPenney building too. My fellow local flickr member pokemonprime (aka Cape Kennedy Retail here in the blog) has a few photos of Merritt Square’s Sports Authority space post-closure, including a few exterior and interior pics, viewable in his album here. I didn’t get any photos of Sport’s Authority’s abandoned exterior myself, so his photos will have to fill in for that!

Like I said before, more from this store will come to MFR when we see what it looks like now as Ollie's!

AFB
Posted by Albertsons Florida Blog at 10:34 AM