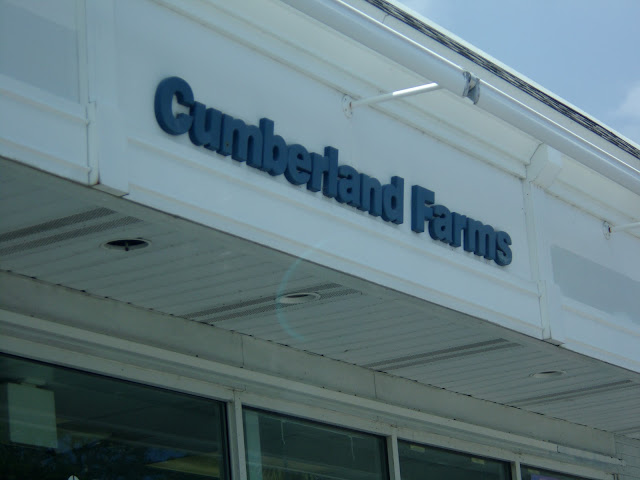 Ah, Cumberland Farms. Almost everyone on the Space Coast now knows them, it's hard not to. While preceded by Racetrac's larger stores and quickly superceded by the honestly scarily quick and rather destructive expansion of it's other Northern, state jumping friend, Wawa, it secured a sizable place in the Florida scene. However, before this era of convenience stores the size of small housing developments that have selections bigger than some local grocery stores, the world was simpler. Smaller stores with simpler signage and simpler designs, but their own charm all the same. While fewer and farther between in the age of superstores, inbetween the titans and on the quieter parts of the highway, they still survive.

Today, we'll visit one of Cumberland Farm's earlier stores, still largely unrenovated. There's not many of these left, and I imagine corporate isn't too keen to advertise them heavily while they're so very focused on their expensive and shiny new stores as they fight for profits in an increasingly crowded market. The only other location of this kind that I know of in Brevard is in Titusville,outside the recently de-Sears'ed Searstown Mall, which now trades under the much blander name of the Titusville Mall. 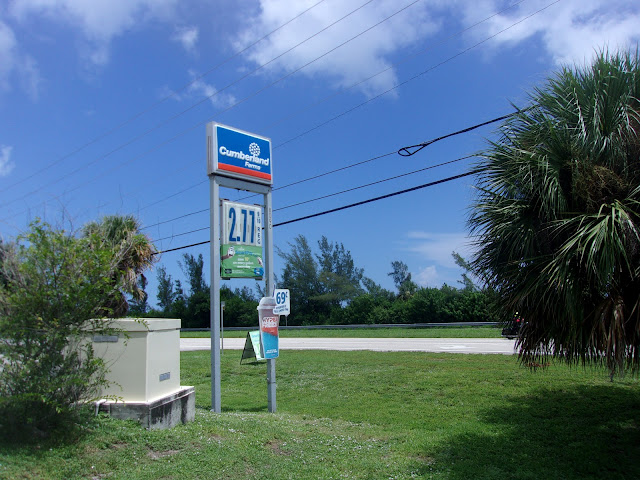 But before we take a closer look at the store itself, we'll look at the rather spartan road sign. No fancy designs here, just two metal pillars, a small square sign, and a numberboard, the way god intended. The one in Titusville is even more spartan I believe, just a pole and a logo on that one, so I guess this is the "deluxe" model....

A simple close up of the sign, which shows the more colorful old logo. If you've visited a modern Cumberland Farms, you know it's a sea of the dreaded modern design. White, green, and gray, dont like those? Well pick a different gas station, because that's all you'll get. Thankfully, this older location isn't nearly as stark. Also, for anyone with a good memory, the gas price probably helps roughly pin down the timeframe of this picture.

This is the closest I got to a complete overview shot of the station, as being located right on the corner of two fairly active streets (as gas stations tend to be) made it tough to get an overview shot without being smeared across the faded ashphalt of the Dixie Highway. Now, just barely visible at the edge of frame is a gas pump, though something seems... odd

Feels a bit breezy under here, doesn't it? I'm not sure if it was ripped off in a particulary violent storm, or if maybe they were just on a really shoestring budget, or maybe the designer had forgotten his umbrella that day and was feeling particulary vindictive. Whatever the reason, I wouldn't want to pull into this place for gas during one of Florida's nearly ever-present rainstorms.

Here's a photo of one of those gas pumps. I can't really pin down their age, but they probably aren't much newer than the station itself. The advertising sign in it looks fairly new, but has been rendered back to glorius faded pastel fairly quickly by the uncaring rays of a Floridian sun. A design flaw of this open concept canopy is also highlighted in the rust that's begun building up on the corners of the metal posts.

Looking back towards the more convenient portion of this gas station, we get a good look at the front of the building and all the signage it displays. Cigarette prices, a boquet of slushies, exactly how much you're going to overpay for the jug of milk you need at 2 AM because you have a craving for cereal and the shops are closed, everything one could ask for.

Not entirely sure why I took this shot, I believe it was because I didn't get the full structure in that first shot. While the parking lot is slightly less active than the highway, I still don't wanna stand in the middle of it for a photo. Im not sure what those yellow bins are. Obtuse mop buckets maybe? They look the wrong color and shape to be trashcans. 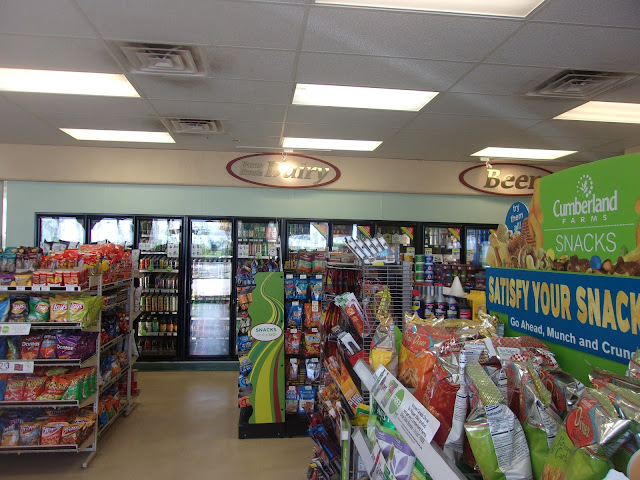 Here's a shot from when you just walk in the door. I'm sort of right up against a display with gag modern branding! But you can still get a good view of the store. This decor package (that I like to call Ovals & Gold) is just about standard for these older stores, based off the two I've seen. 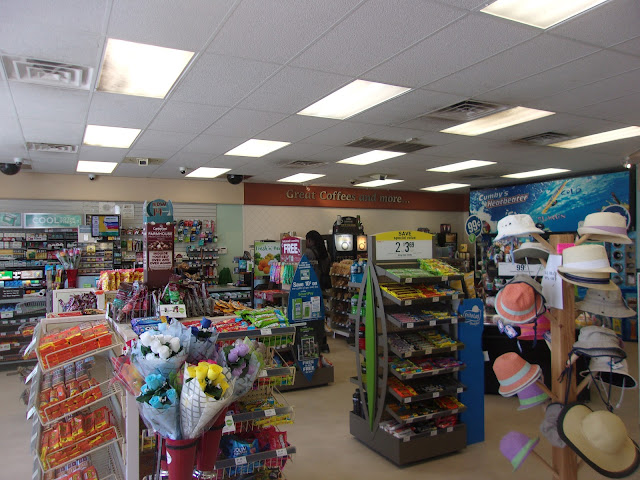 Turning to ourleft, we can see the cluttered area of candy, flowers, and kitsch that occupies the space leading up to the registers. Micco isn't exactly on the tourist circuit, but I guess they still gotta sell hats and other junk. Maybe it's part of the franchise agreement. We can also see the soda and cofee dispensers on the far end of this area. 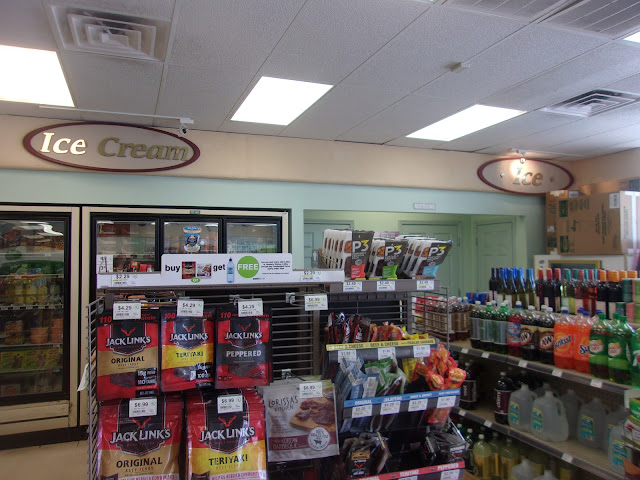 Turning to the right, we can see a fairly well stocked selection of jerky and other protein-y quick foods, as well as some rather low shelves that contain the two liters, jugs of water, and the wine (because that can't be near the beer, that'd be silly). I'm surprised they sold enough ice cream for it to feature it's own sign on the fairly limited decor package- I don't think there was even a sign for "soda" or "soft drinks"- but they still do sell ice cream, so the sign isn't lying. The "Ice" sign also is sorta shoved off in the corner, but I think that results from the decor package being forced into buildings of wildly varying size. so it's not like they could carefully design it. The Titusville Cumberland Farms, soon to be featured I'm sure, is way smaller and more cramped than this, with the same decor package.

And that rounds off our photos from Micco's little vintage gem. However, this is not a totally happy ending. I mentioned that this store was kind of forgotten, not really promoted amongst Cumberland Farms' newer, bigger stores. However, it sadly was apparently noticed by someone in the company.

Yep. A "next generation" store is coming to Micco, razing the old gem in it's wake. Sad really, as this one was closer to me and far less out of the way compared to the Titusville one. The one in Titusville also has the dreaded modern signage, not the more pleasing orange & blue panels this one has. But, as they say, all good things must come to an end, and I'm glad I could experience this little store while it lasted. On that somber note....