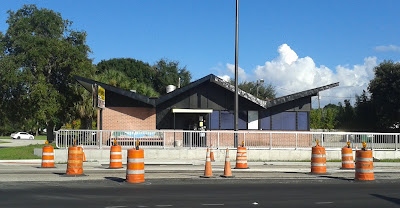 This Mr. Donut restaurant opened in 1971, featuring the signature Mr. Donut zig-zag roof design. This location closed by the early 90's when the Mr. Donut brand was mostly phased out in the United States. Currently, this building is home to a restaurant called The Cuban Sandwich.

I really like the look of this building. What you see here is a classic example of a 70's built Mr. Donut shop. Mr. Donut was the second largest donut chain in the US (behind Dunkin Donuts) for many years. Then in 1990, the parent company of Dunkin Donuts purchased Mr. Donut, and most of the American Mr. Donut franchisees switched their affiliation to Dunkin Donuts. However, some Mr. Donut locations in the Northeast (who already operated in close proximity to existing Dunkin Donut locations at the time), chose to form a new donut chain called Donut Connection in response to the buyout. Donut Connection offers a menu that's almost an exact copy of what Mr. Donut offered from what I understand. As far as Mr. Donut today, their presence in the US practically vanished in the early 90's after the purchase by Dunkin Donuts. However the Mr. Donut name is still used in Asia, where the chain continues to grow and prosper. However, there is apparently a single Mr. Donut location left in the United States all these years later, located in Godfrey, Illinois. Even though there's only one US Mr. Donut holdout, there are still plenty of these former Mr. Donut location sprinkled throughout the US, some of which are still operating as independent donut shops today (like the one in Winter Haven). 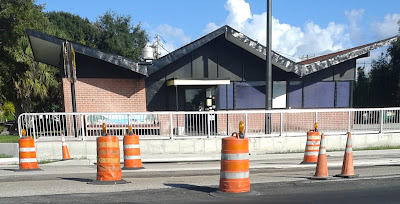 Here's another view of the front of the former Mr. Donut building. It's too bad the current owners covered over most of the windows, however, the interior still looks pretty interesting (if not somewhat original). 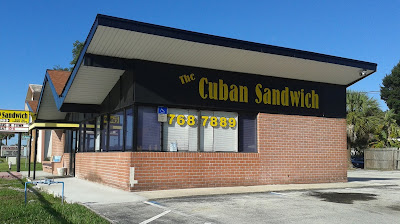 Side view, looking under the awning created by the squiggly roof. It's hard to see in that interior photo I linked too, but the squiggly roofline is still visible inside the restaurant as well. 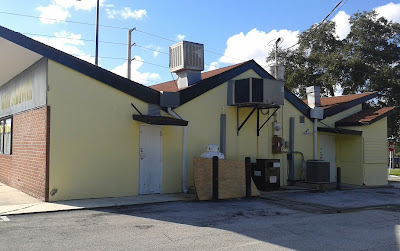 Here's a quick look at the back of the building. 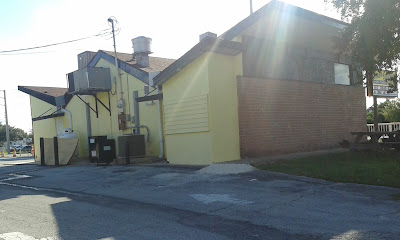 The back of the building again, but this time viewed from a different angle. Sorry about the glare in this photo, but as you know, the sun never wants to cooperate with me sometimes!

Now really in the mood for a donut, until the next post,