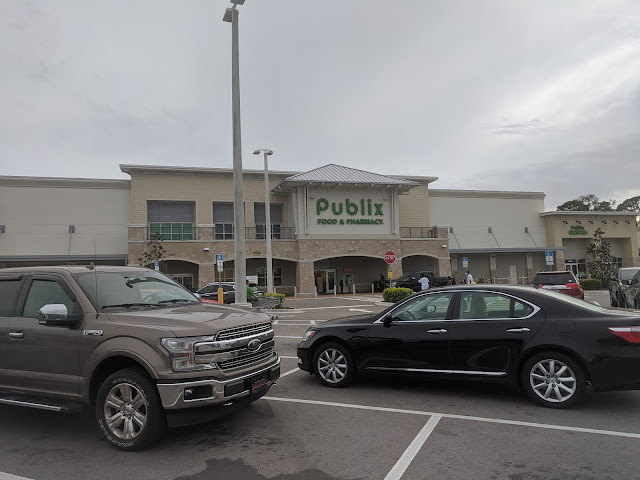 While we've seen plenty of older Publix stores on this blog, and I have a lot of them to feature soon, we haven't had too many looks at their newest model- featuring their new "Evergreen" decor. The rollout for this package has been painfully slow, with lots of stores presumably planned in the Classy Market 3.0 era opening with that decor, months after Evergreen first surfaced. 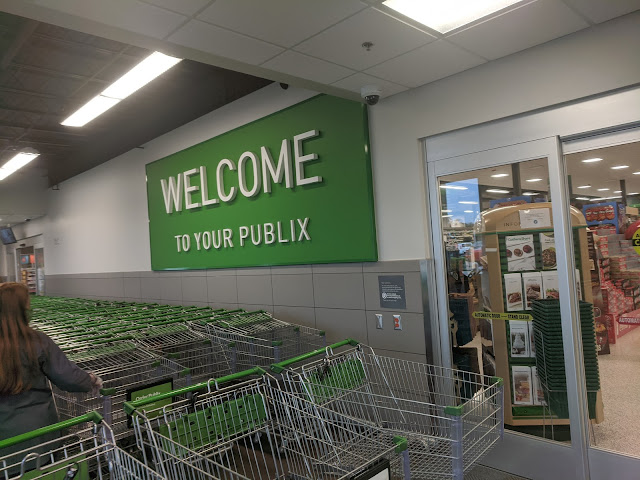 Welcome indeed! I mean, don't you just feel absolutely at home with this sea of cold greys and..... more cold grays? At least the ol' Publix green seems intact. 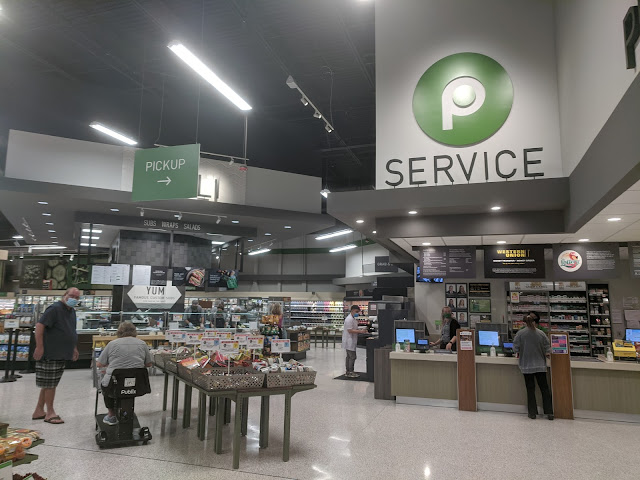 Now, unfortunately, these photos are actually from several months ago, and I had very limited time to make a racetrack-run of this store. So my knowledge of its layout is about... 0.2, if I'm being generous.
The service desk and the all-important sub & salad bar are visible here, in a stark departure from typical Publix stores. In a lot of older stores, this service desk is really shoved into a wall at the front of the store, and the subs are with the rest of the deli, again against a wall. This store, being a complete ground up, was able to be more free with its layout. 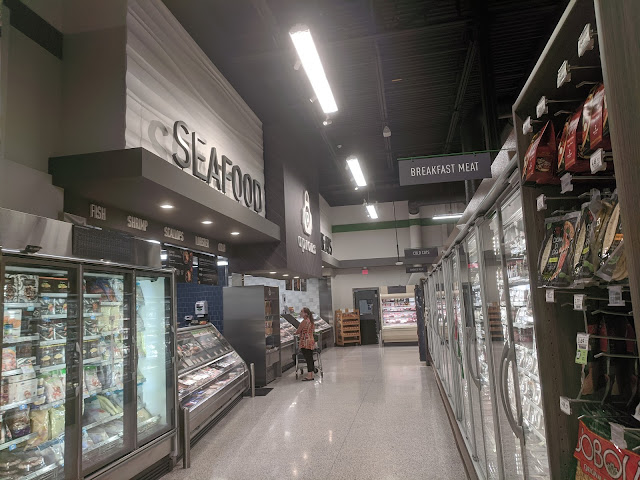 The seafood counter, however, wasn't as lucky, and did get shoved into a wall. A little splash of color can be seen here, with the dark blue tiles. Also note that the Aprons (Publix's cooking school/sample counter/recipe rack) area has been extended into a full-sized counter, instead of a kiosk like at older stores. 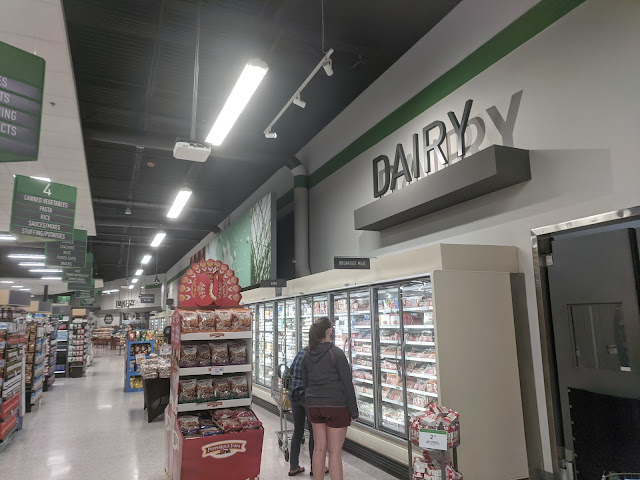 Dairy here really "stands out".... okay, bad joke. It's following the tried-and-true method of shoving the staples at the very back, in order to make you browse through and hopefully buy as much extra junk as possible. A little bit of color shows up in the photo panel above the coolers, but it's mostly green. They're really sticking to a limited color pallet in this package, which is a stark change from the more colorful Classy Market 2.0 and 3.0. 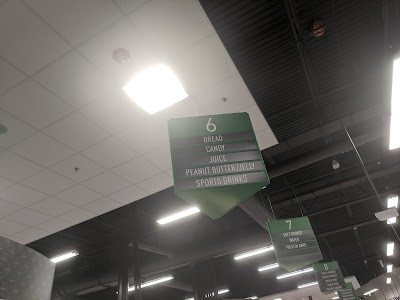 This annoyingly blown out photo (dang modern LED lights) is my best shot of the aisle markers. They seem largely the same as those from CM 3.0, just with gray placards. 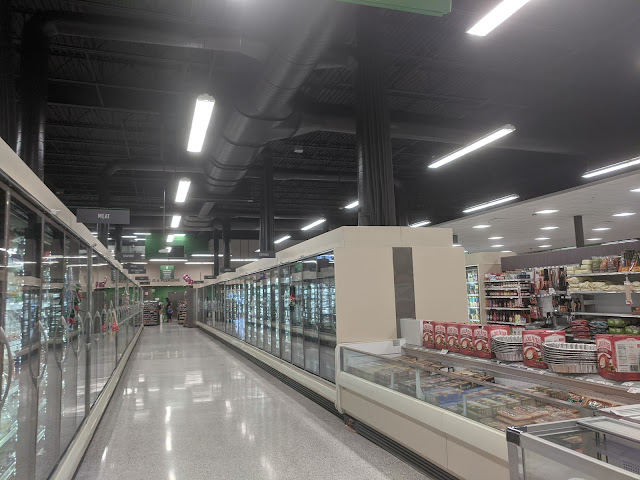 Here we see both a good shot of a freezer aisle, as well as a good look at the exposed ceilings Publix sprung for in their newest models. 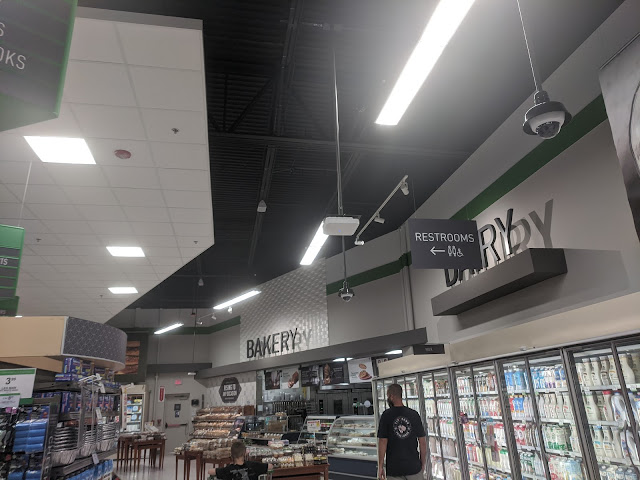 The bakery can be seen here, along with another Dairy sign- this time actually above dairy products. The bakery is another section that lost a lot of color coming over from 3.0, and it makes me sad to see it so gray. Also visible to the left is the sort of "suspended ceiling" Publix did for the center of the store. It's a neat feature, though I don't want to imagine how much dust will be up there after 20 or so years. 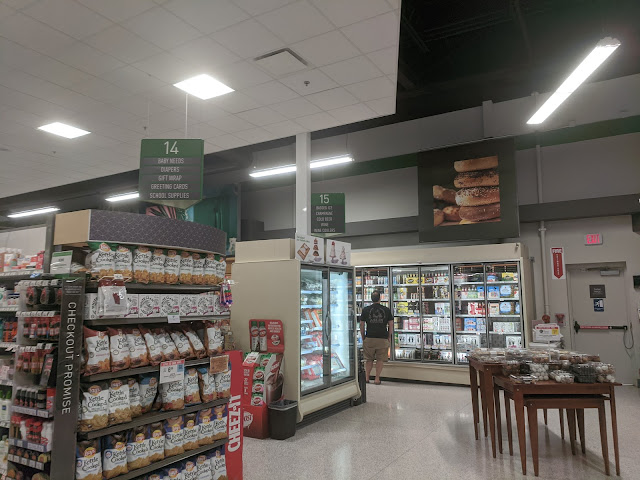 We'll round off with this shot, showing the end caps- which, well, haven't changed awful much. Whadda you expect, I guess. Another survivor are the tables visible to the right- I'm surprised they didn't get switched for gray ones! I am confused as to why they're double stacked like that.