Once, there were three gas stations.
The first to fall was the New Haven Chevron, located at 15 E New Haven Avenue.

Disappearing quietly from at least the news press in the late 1990s, a rare non-Eckerd conversion CVS was built on it's site in 2003.

The second, was Gene's Shell.

A vintage, peaked roof Shell station, it was operated for likely it's entire life by it's namesake, Gene L Johnson, an Ohio native who had moved to the area in 1969. It's likely this station was built not soon after. Gene L. Johnson would pass away in 2002, at the age of 75.

By 2007, it had suffered a common fate for old service stations; converted into a used car lot, named "Car Cabana".

By 2011, while much quieter, there appeared to still be some activity at the site. However, this vintage building was not to stand.

Car lots and mechanics determined an urban blight, the wrecking ball fell in 2015, with the lot redeveloped into an AT&T store to buy new phones, an iFixGalaxy to fix that when you broke it, and a Tijuana Flats to numb the pricetag of the latest iPhone in beer and burritos.
The final one to fall, was the New Haven Exxon. 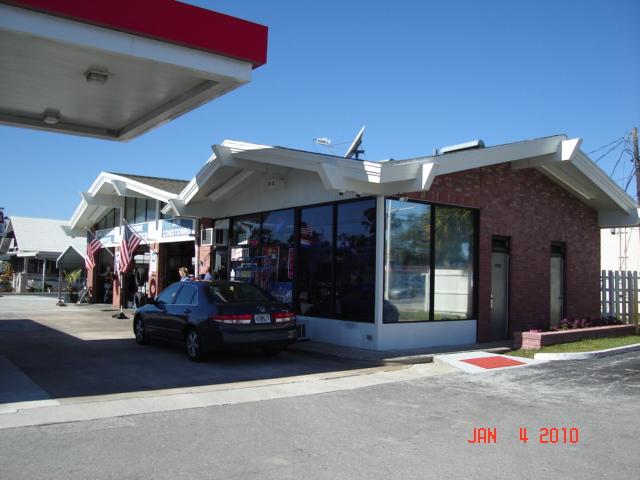 A wonderfully preserved, and still operating, vintage Exxon, which, to the very end, offered Full Service at one of it's pumps. A fly in amber, it seemed perfectly stable in it's little lot, situated on the corner of New Haven and Babcock.

Until it very abruptly wasn't.

One unremarkable morning in September, terrifying words rolled onto a local Facebook page.

"Does anyone know what's going on at the old Exxon on New Haven & Babcock? There's an excavator parked next to it." 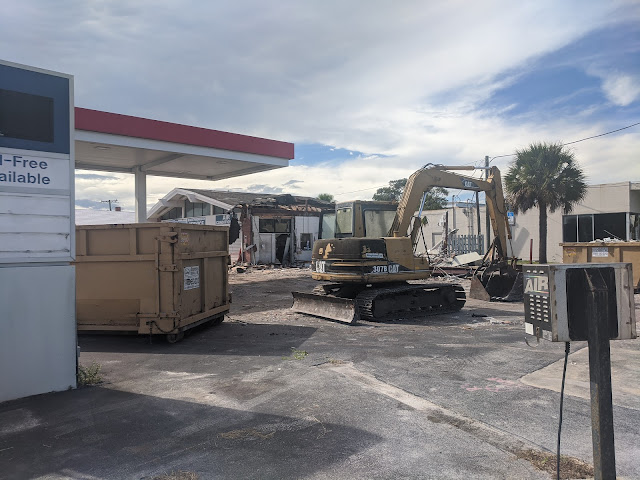 A quick trip to the scene revealed the worst. Demolition crews had come to pull down the intersection's final gas station. By the time I had arrived, the office half of the building had already been pulled down, with only the damaged repair bays and the canopy still standing. 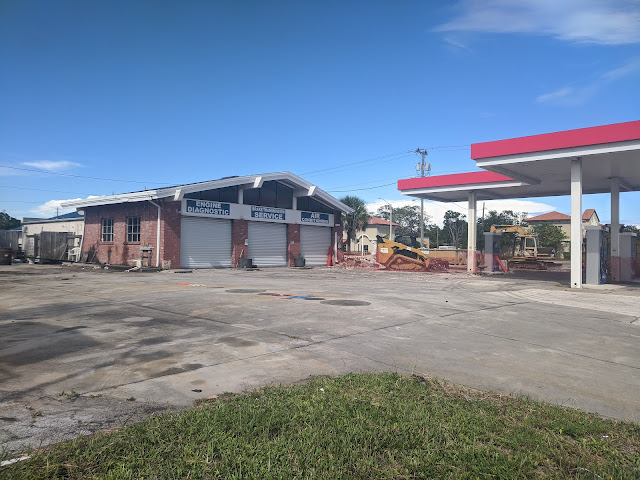 The one silver lining to this situation is that by the time I'd arrived, the demolition crew had parked their equipment and left for the day, giving me essentially free rein around the property. 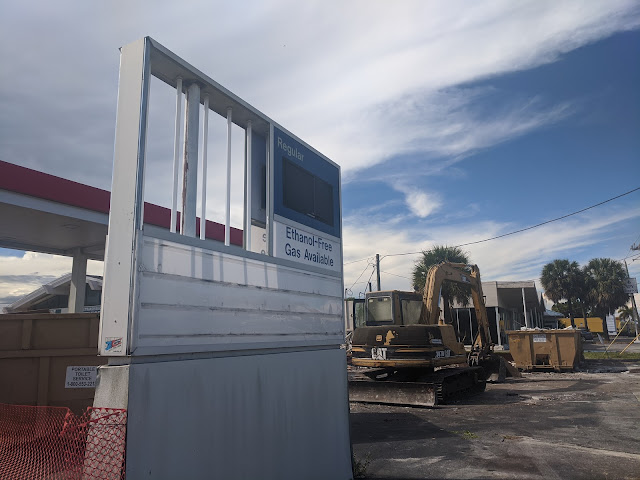 The road sign was already stripped out, the panel presumably shipped off to be reused at another Exxon station in Florida. 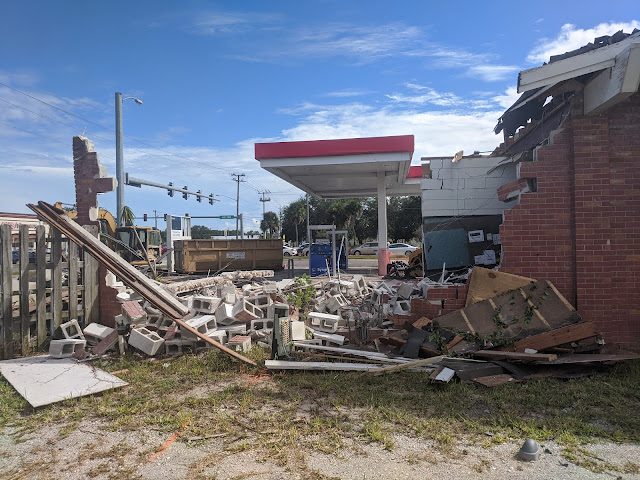 One minorly amusing thing revealed by demolition was that the building was not in fact brick, but actually cinderblock with a brick facing. 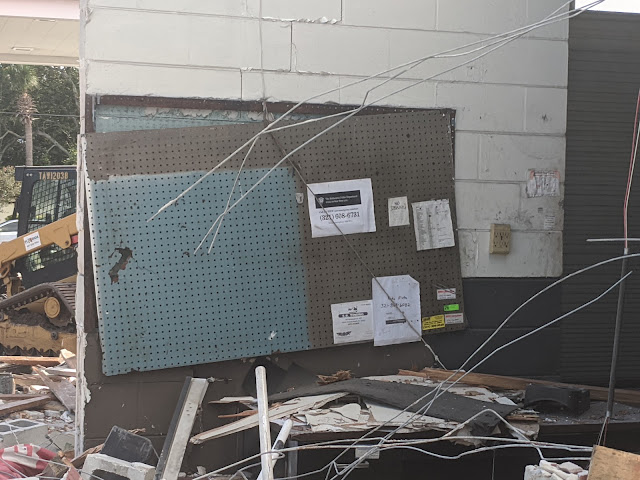 Paperwork, notices, and convenient phone numbers are still attached to this pegboard, clinging to the half-demolished wall. 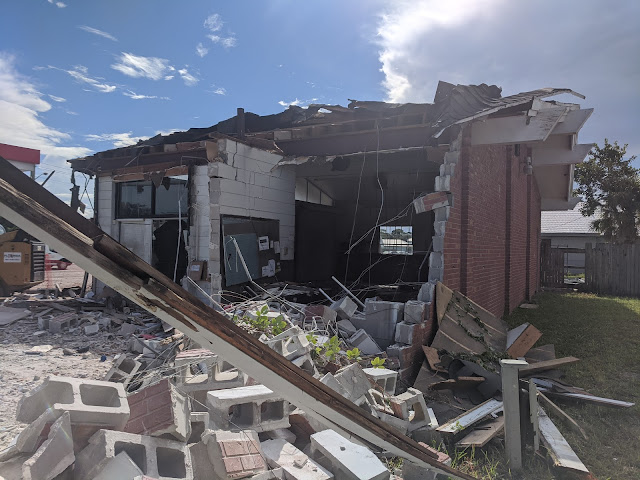 I considered taking a cinderblock from this pile just as a souvenir, but ended up not doing it. 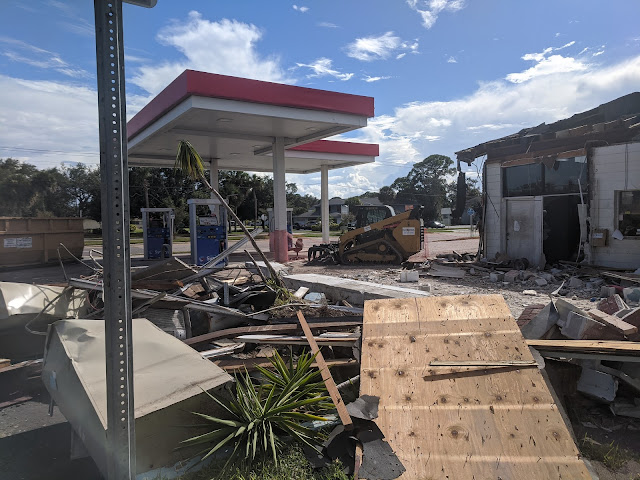 A pile of scrap metal, old cabinets and support beams, lays separated from the rest of the rubble, likely to be hauled off to a metal recycler. 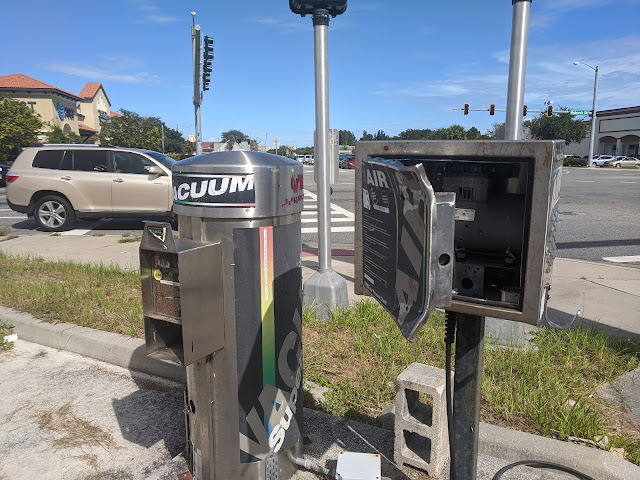 I'm not sure what happened to this air and vacuum kiosk, (maybe stripped of copper or something?) but they've taken a beating since they were in use. While the styling does remind me of Amoco, this has been an Exxon station since the day it was built in 1968.
Also notable is that you can see both former gas station lots in the background here. 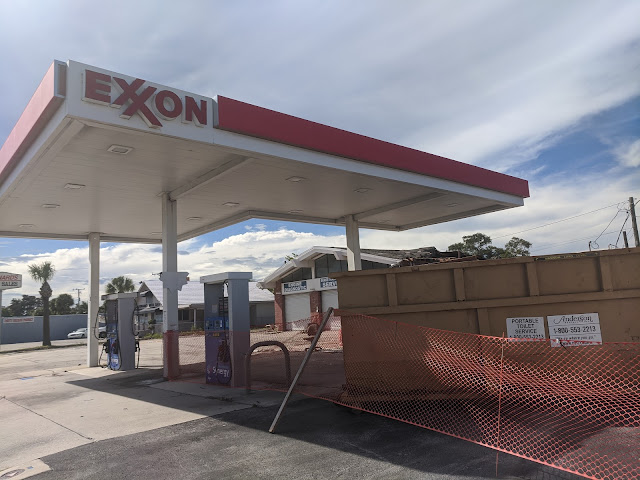 The canopy and the pumps were the last to fall, with it being torn down shortly after the tanks were removed, about a week after I stopped by. 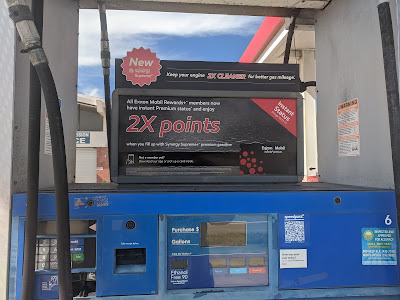 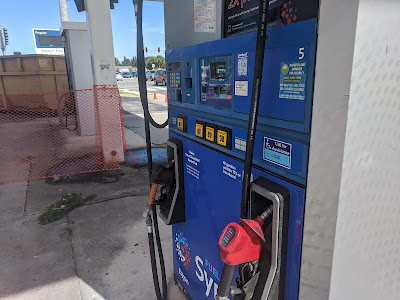 Despite all the branding thrown around, a review I read indicated that this station didn't actually sell Exxon-branded fuel, despite carrying the name. 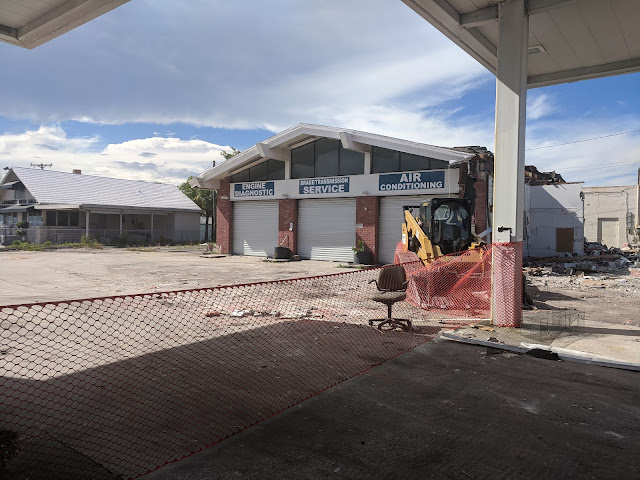 A shot of the remaining repair bays here gives us a good view of the peaked roof and the windows installed in the roof. I almost wish someone could have come in to salvage these, but I'm not sure what use they'd have in another building.

I also enjoy the random office chair, floating around. Boss has to sit somewhere, I guess. 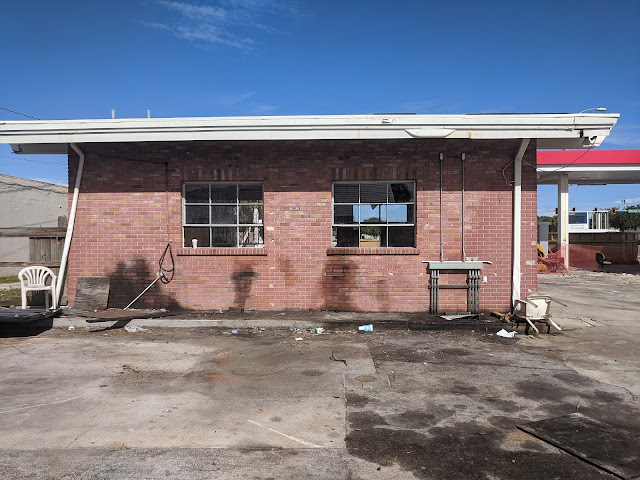 This side of the building must have been where they stored junk and other parts, and there's enough stains to indicate a miniature superfund site worth of spilled oil, antifreeze, and gasoline over the decades. 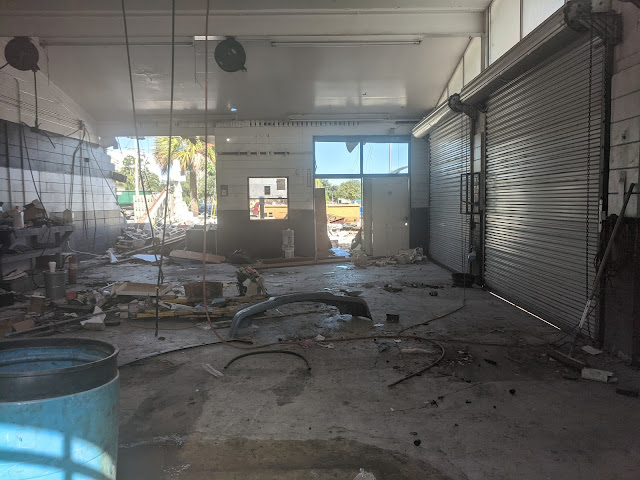 A look through the windows shows us the debris and rubble strewn interior of the garage. 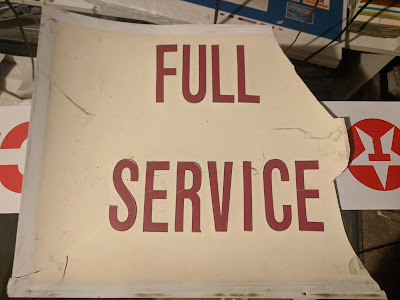 I'll leave off with a photo of this Full Service sign that I picked off the ground and saved, despite it's damage. I'd read that there was one pump, closest to the building, that was still full service up until the day they closed, so this likely adorned that pump. Despite looking quite weathered and old, the other side has a more modern Exxon advertisement. So I'm not sure how old it really is.

The Texaco sign behind it is a cheap repro I bought at a gift shop, so don't get excited about it.
Now, I haven't mentioned it yet, but the new business taking over this site is a car wash, called Dirty Dog's Car Wash. Now the issue is that their typical car washes are all bigger than this plot alone, which means... this wasn't the only building destined for the wrecking ball. 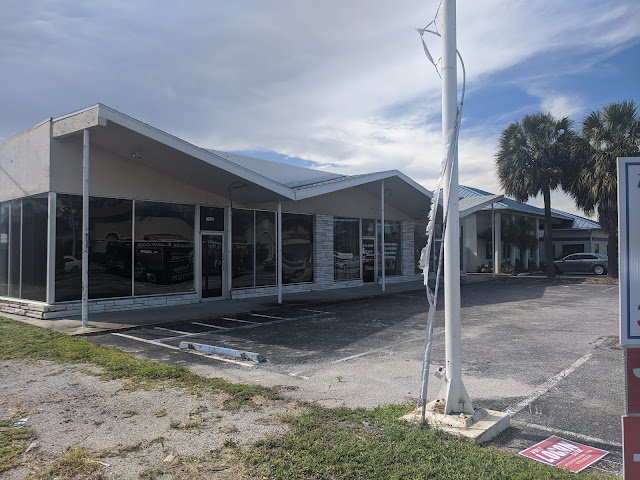 The other building to come down for the new car wash was this zig-zag roofed strip mall, which actually pre-dates the gas station by 6 years, being built in 1962. By this time, it was totally vacant, so it being demolished wasn't surprising. Thankfully Leonard's Auto Sales, next door to the Exxon and originally a private home built in the 1920s, isn't being demolished. 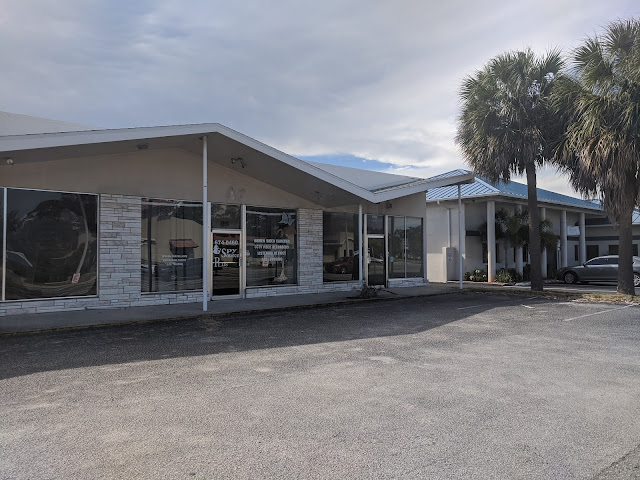 The only real visible remnants came from the cutely namely Spy Source Plus, an interesting store selling hidden cameras, CCTV equipment, and other gear. It also had a small road sign, which was the only road sign the plaza ever appeared to have, but my photo of that came out blurry.
With that, until next time. This was Cape Kennedy Retail.

Posted by Cape Kennedy Retail at 9:56 AM