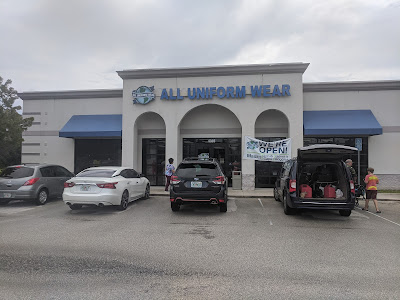 All Uniform Wear, as it's name suggests, specializes in uniform wear, primarily for the medical field and for private & charter schools. They're a weirdly scattershot chain- there's a swath of stores spread across Florida, and, bizarrely, one each in North Carolina (Charlotte), Nevada (Henderson), and Texas (San Antonio). This location was originally located in a generic strip center, farther up the road, before moving to this building, a former Hobbytown USA, in 2019.


Let's talk about that location, by the way. While I'd visited the store a few times, I never took photos, so these photos will be sourced from various other places. The store was a nice little place, and the closest chain hobby store unless you wanted to drive to Viera to visit Hobby Lobby, which had an arguably worse selection for actual model kits and supplies. However, it did have one crippling flaw.

Location, location, location. While the store faces US-192, it doesn't have a direct access to it. To get to the store, you have to drive into what ostensibly is the entrance to the CW Theaters behind it, and then drive in around the back of the store. It's the most baffling layout I've ever seen, and I imagine it in no small part contributed to the store's closure.

Inside, the store was fairly generic- most of the walls were filled with merchandise, and not much decor.

The store seemed to be focused towards RC vehicles of all kinds, but had a decent variety of items. 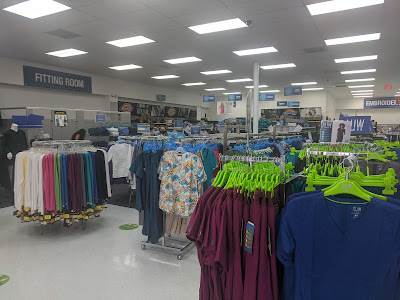 Switching over to my photos now, we can see the interior of the store. The front of the store is home to a large amount of medical clothing. A sign for the fitting rooms installed by All Uniform Wear can also be seen to the left. 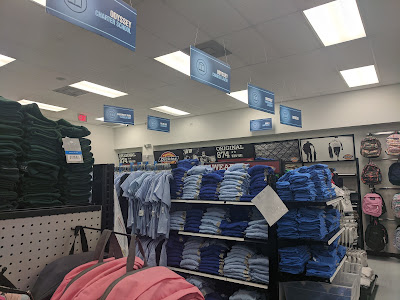 This section shows one of the shop's more distinct sections, selling specially embroidered clothing for local charter, private, and religious schools. You can also see some generic displays of backpacks- I wonder how quiet this section gets outside the school months. 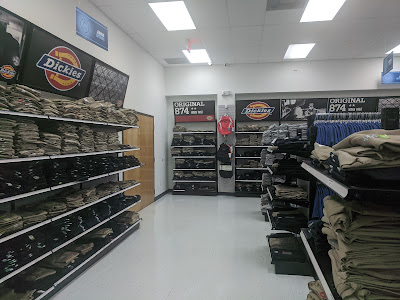 Less specifically branded but still ever-present in dress code tan khakis have taken over this department, along the back right corner.

I think this is the department I see in my nightmares. 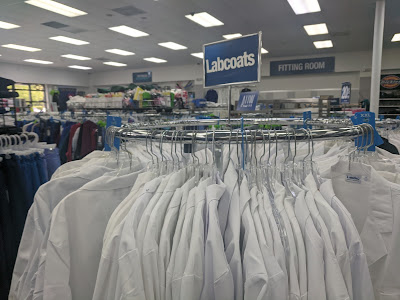 A display of labcoats also lurks amongst the majority of hospital clothing. (You don't use labcoats in medical settings, do you? Well, unless it's a medical lab). 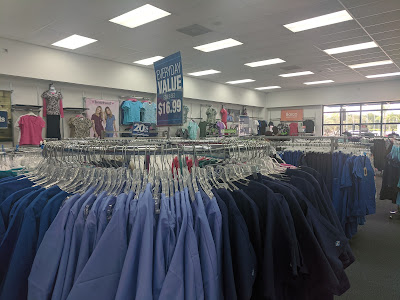 More clothing racks fill the majority of the floor. 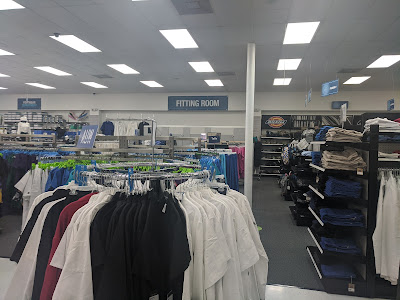 Fitting Rooms on the other side of the building 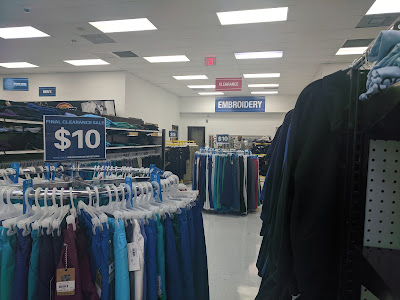 A view of the embroidery counter at the back of the store; I'm not sure what this area was during HobbyTown's stint here, and I doubt All Uniform Wear carved it out themselves.


Now, while there is a very nice HobbyTown label scar on the back of the building, I was unfortunately unable to get a photo. So, I guess that's it for now.