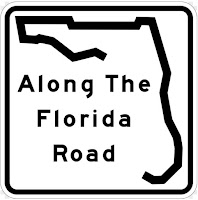 Driving home from an outing to Vero Beach, we passed this amazing empty sign. Despite being painted out and peeling away from it's frame, this sign still catches a lot of attention sitting on the side of the road. Initially, me and my parents thought it was some sort of drive-in establishment. The sign's about the right size and looks about the right era, and the arrow fit thematically too. However, checking the much smaller and less impressive secondary sign, we can see that it was actually a showroom or store for Hale Groves.

Despite serious effort put into blanking out the large sign, this smaller sign had it's logo left intact. Though in recent years, it seems the paint's started trying to escape on it's own. 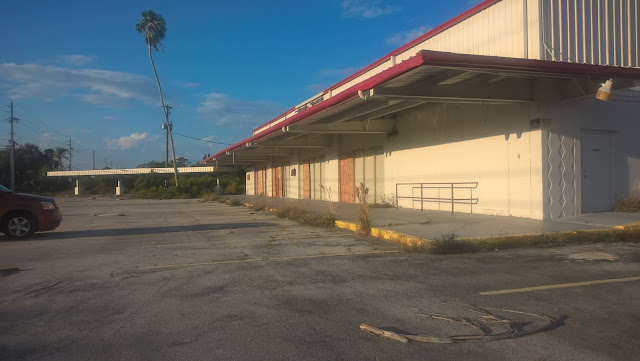 Vintage awnings oversee a parking lot of faded asphalt, increasingly consumed by plant life run amok. If one wanted to sum up the probably hundreds of former roadside delights throughout Florida, that would be a pretty good start. I love the architecture here, even for a rather simple building built out of what was once just a packing house. 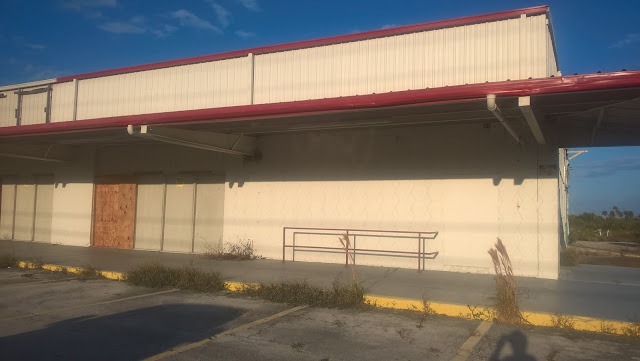 Getting ourselves closer to the main building, we can't see too much, save for the large amount of plant life that has begun to spring up in the cracks even after a relatively short period of abandonment. 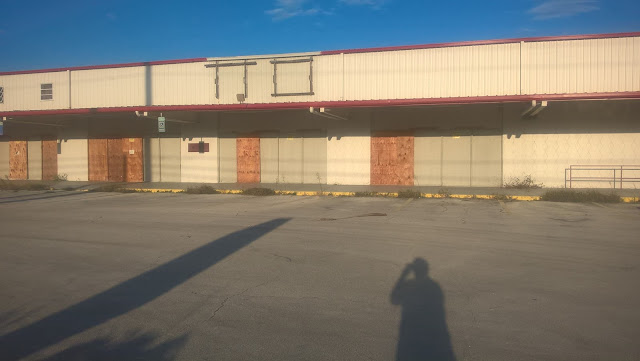 Not much here of note except a decent amount of plywood nailed to the front of the building. This must have had plenty of doors/big windows in it's day, part of me wonders if the other panels next to them might have once been windows as well. The bricking up of extraneous, large windows in department stores and other commercial architecture of the 50s and 60s seems ironic, considering the money-demanding feature it has become in houses decades later. 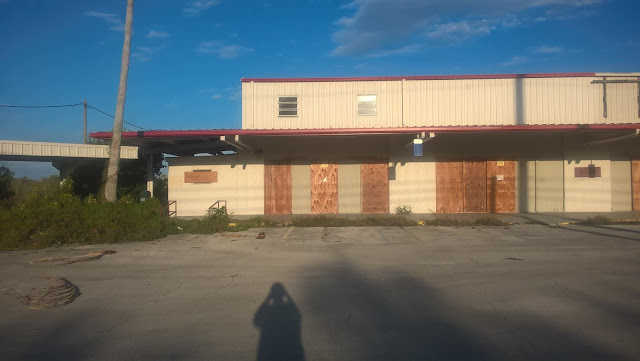 A nice shot of the end of the building, transitioning into the covered parking area. Notice that massive pile of plant matter there, I'm really not sure what's caused it to take off like it has. Proximity to the ocean? Decades of spilled oranges rotting into the soil making the world's greatest fertilizer? Who knows. All I can say is that in a few decades if this building hasn't collapsed under it's own weight or into the sea, it's gonna look like a giant hedge with some roofing poking out. 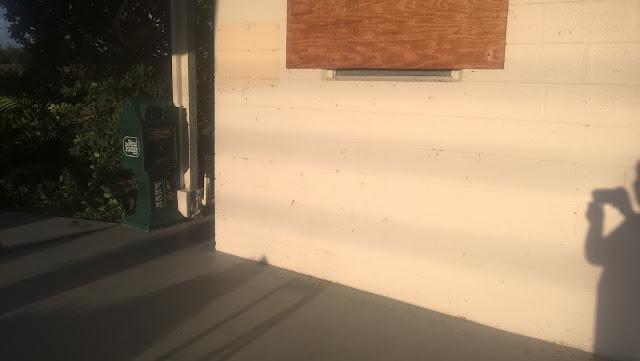 This is the last time you'll see plywood prominently in a photo here, I swear. We reach the end of the building, with a small unknown window covered with more of the USA's favorite budget wood sheeting. Alas, even in abandonment, we cannot escape the reign of the crappy free newspaper/circular either. Actually, let's get a little closer to take a look around the corner.... 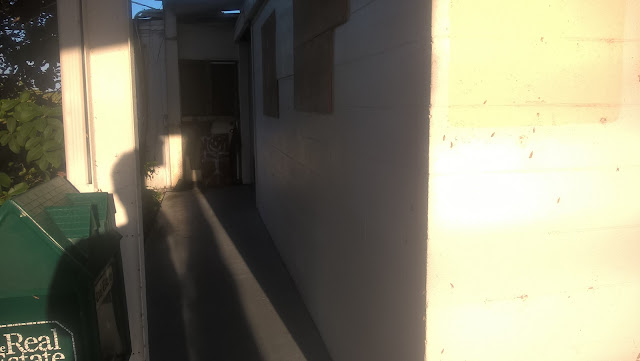 and look down the hallway of darkness. Despite a sunny day, overgrowth has shaded this hallway in such a way as to make it quite eerie. I considered going down here, but the feeling of weird unease I got just looking at it prevented me from exploring it any further. 99% chance I would have been fine, but you know, sometimes you just don't have a great feeling. 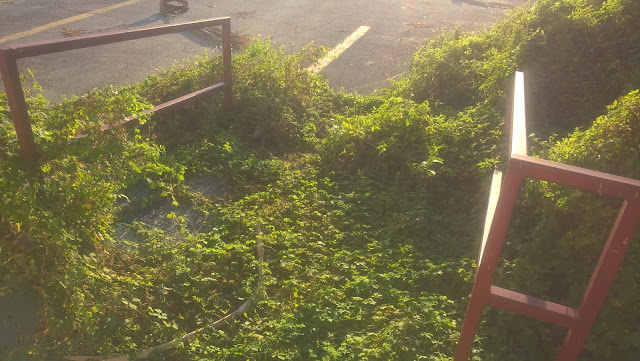 Albeit slightly blurry, this photo illustrates very well how the plant growth has taken over this ramp. Whether this was a disabled access ramp, a loading ramp, or possibly both, I do not know. The railings are still in good shape though. 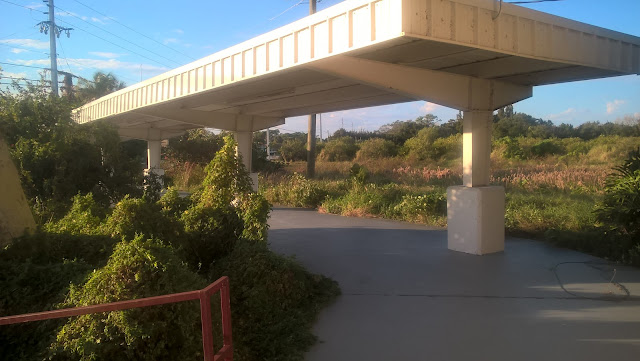 This shot came out pretty well I think, showing the small shaded area next to what I believe was parking. I really like the architecture on this little canopy, even if it's not that fancy. How this chunk of concrete has escaped any large amounts of overgrowth is beyond me, I can't imagine just being shaded has been that effective. 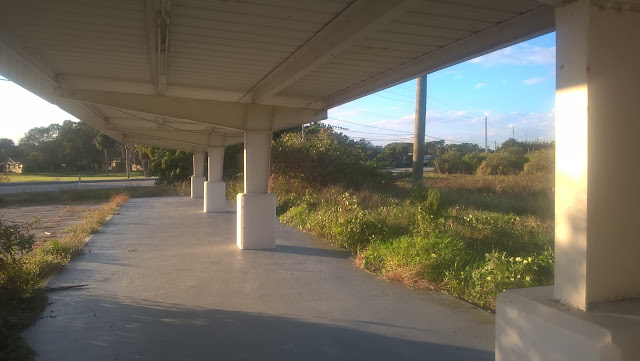 Here's a shot from underneath the little vintage canopy. I wonder if there was ever anything under here, as it seems a decent sized space to be completely empty. 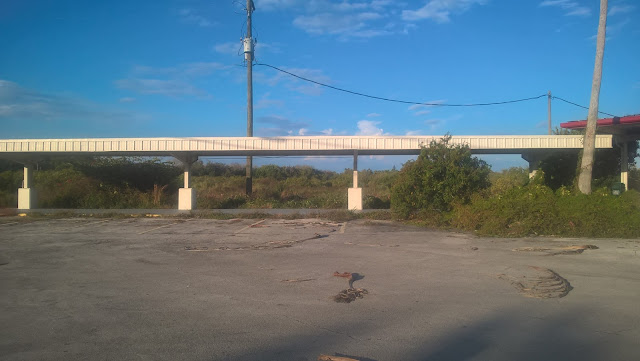 Reminds you a little bit of a book cover doesn't it? It's not perfectly frame, but I still do like this shot. 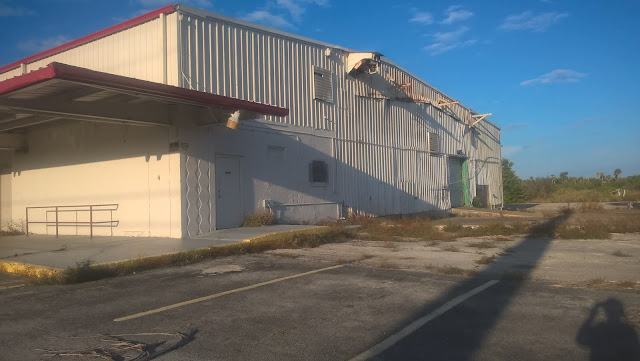 To round off our post, we'll end with this quick photo of the side of the building- which makes the structure's packing house origins a lot more obvious.

Florida, despite it's nearly nationwide fame for citrus, doesn't have a great citrus industry anymore. Least not in this part of the state. Up and down Brevard and Indian River counties there lays a string of abandoned packing houses- Old Victory Groves, Oslo Growers Association, Quality Fruit Packers, Greene River Packing, and Nevins Fruit Company, just to name a few. Retail outlets, too. In recent years Harvey's Groves closed it's two retail locations in Rockledge and West Melbourne, and Policicchio Groves in Merritt Island. All shuttered. The one in West Melbourne is now a vape shop, the newest addition to the list of common low-end tenants.
Posted by Cape Kennedy Retail at 7:48 PM