Among all the fast food concepts fed nearly wholesale into the incinerator of obscurity, there are few so thoroughly as forgotten as the purely drive-through fast food joint. Minimal footprint, a simple menu, some drive thrus, and a couple tables outside if you felt like splurging. Some chains built entire empires in this sector- from the cheerful Central Park to the angular, efficiency driven Hot n' Now, and many national chains, such as McDonald's and even Chick-Fil-A, had experiments in this market as well.


Evidently Burger King also threw their hat into this ultra competitive ring, opening this location as the first drive-thru Burger King in 1992, before closing at an undisclosed date sometime before 2007 (since it was already closed by that Google Streetview image). So suffice to say it wasn't a roaring success. It's current state is actually somewhat improved from a few years ago, the result of exhaustive work with a chainsaw and a hedge trimmer, keeping the aggressive plant life from swallowing it whole. 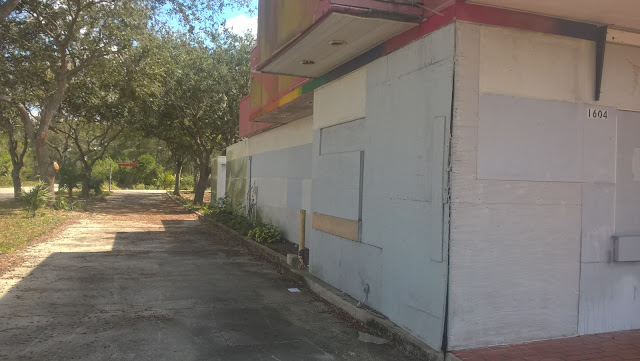 However, despite the foliage cutback and a shiny new for lease sign facing the road, this building continues to waste away. It's colors faded, it's drive-thrus coated in acorns that crunch like gravel when walked on. Despite it's proximity to EFSC and several other schools, this strip of Clearlake Road isn't home to much. Some gas stations, a combination Domino's/Boost Mobile in what looks to have once been another convenience store, an abandoned bank. 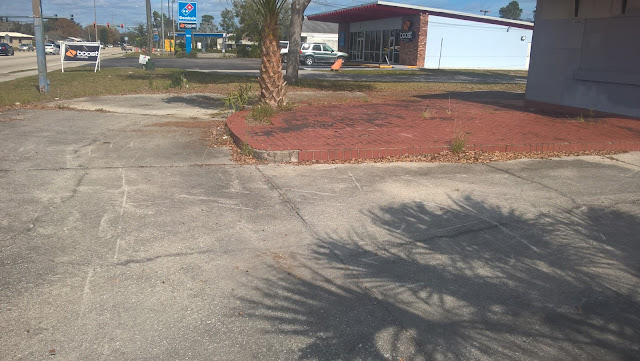 This shot, while awkwardly framed, does better show the small brick platform out in front of the building, which I presume would have held just a few tables and chairs, likely removed officially when it closed, or unofficially shortly thereafter. And note the customary palm tree, that I'm beginning to suspect is required by law. 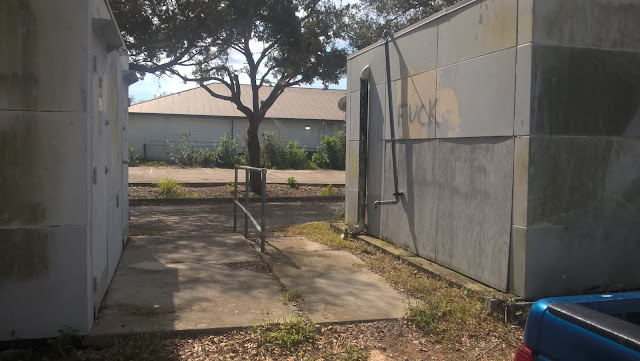 Amazingly, for a well-weathered and several years abandoned building, nearly adjacent to a college, in Cocoa of all places, this building had almost no graffiti, except for this one simple piece on the old HVAC block(?). I don't remember any doors on this to indicate they were walk in freezers.

To end off this post, I'll add a newspaper clipping from the September 12th, 1992 issue of Florida Today, discussing this location's opening. Massive thanks to cflretail for digging this up for me.

That's all for now!
Posted by Cape Kennedy Retail at 10:24 PM