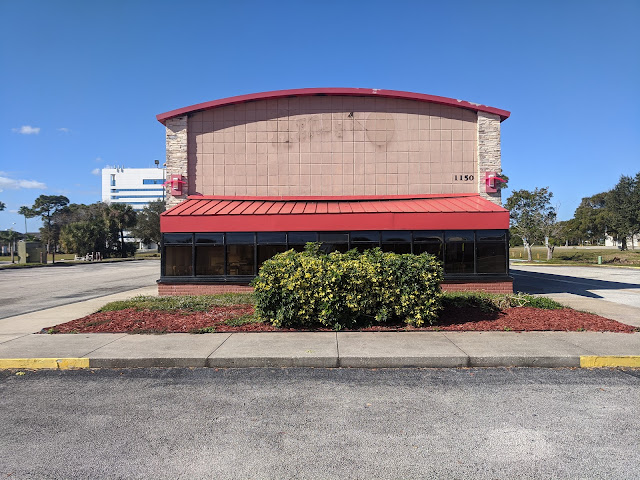 Now on this blog, I photograph a lot of vacated retail. Usually they close due to lack of profit, or parent bankruptcy. But rarely do they close because of fire.
While the exterior is fairly clean, all it takes is to walk up and peer through the smoke-fogged windows and... 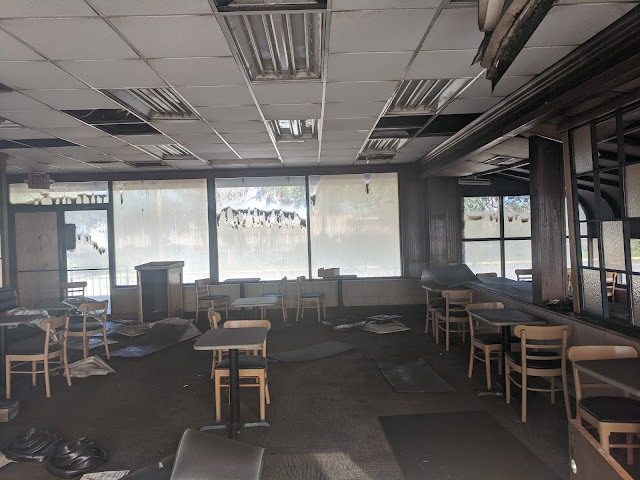 it's clear something happened here. Now, I can't find info about this fire, which I guess is a good thing, because it means it didn't cause enough damage to warrant news coverage. (It was in 2020, however) And I also think this scene is more a result of cleanup crews with little regard for already-ruined furniture, than of a panicked evacuation. 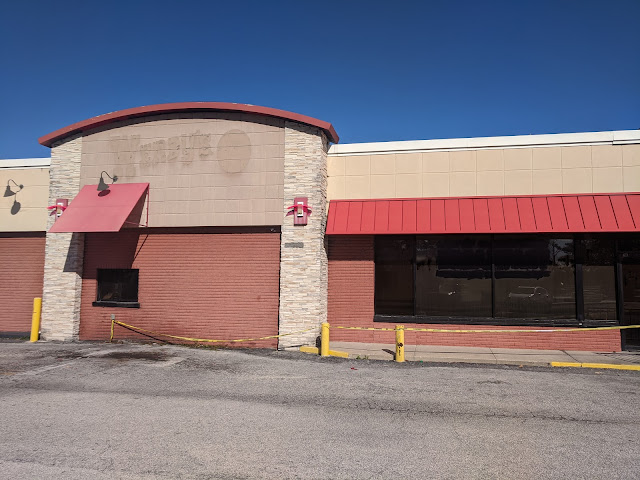 The caution tape strung along the side of the building is another red flag, if you didn't want to get close enough to check out the interior. 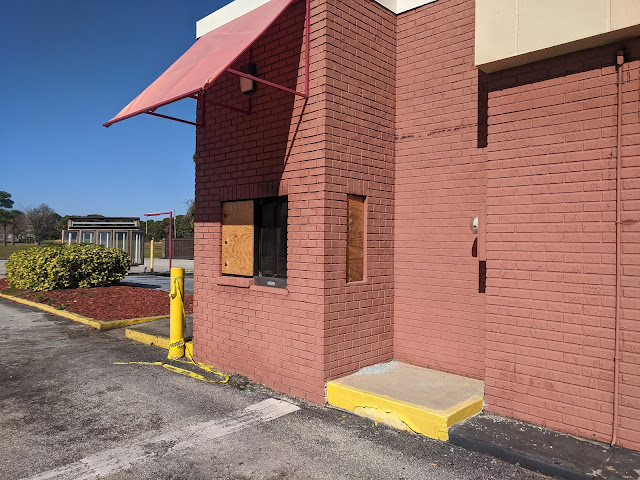 The drive through is also in a pretty rough state. Not sure what caused some of the windows to be busted out, aside from just petty vandalism. 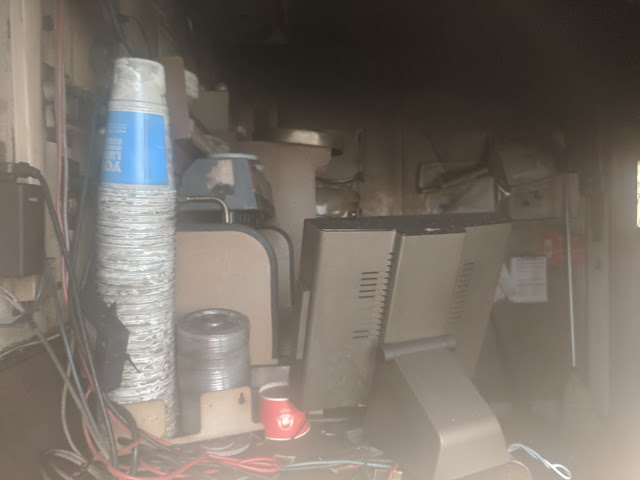 Looking through one of the few intact windows, we see pretty much everything has been left in place. Smoke is an unexpectedly pervasive and destructive force, and even with relatively small fires it can completely ruin an entire room's worth of stuff. If I was corporate, I wouldn't even dream of re-using any of this, so it's not too surprising it was all left behind. 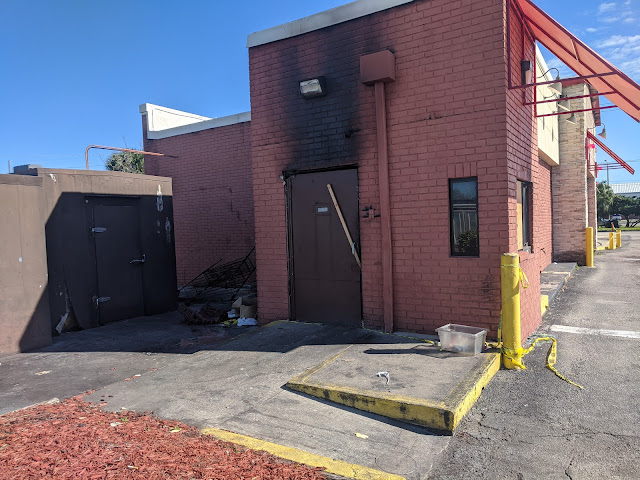 The back of the store has a pretty gnarly smoke scar, as well as some scattered piles of leftover cleaning supplies. While the fire had happened relatively recently before these photos were taken, it didn't feel like it was so recent that there'd still be junk strewn about. But I guess not. 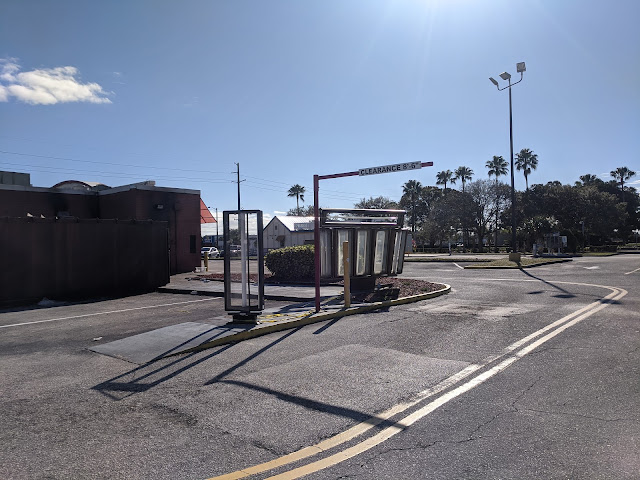 This location must have been fairly low-volume before the fire, since as you can tell from this photo and previous ones, they completely abandoned the property after doing minimal cleanup, instead of re-opening. Which wouldn't even be out of character, as several years ago the location on New Haven Ave suffered a small fire, and was closed for a few years before re-opening. But I doubt similar will happen here- they've left for good. 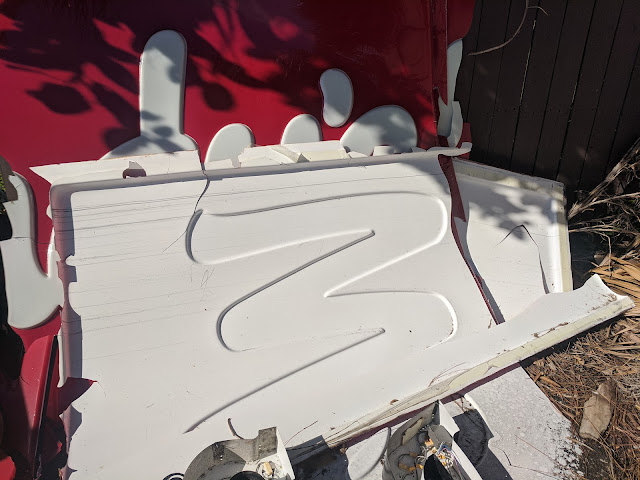 One of the most heartbreaking discoveries here was to find all the signage from the store, which would have been an amazing find as a memorabilia piece (this was inside the dumpsters so I would be fine taking it), but unfortunately as you can tell, everything's been completely destroyed. I believe you're looking at what would have been the panel in the road sign, with some chunks of the individual building letters at the bottom of the frame.
With that, this has been Cape Kennedy Retail
Posted by Cape Kennedy Retail at 7:13 PM