When the 2020s Meet the Thrift Store 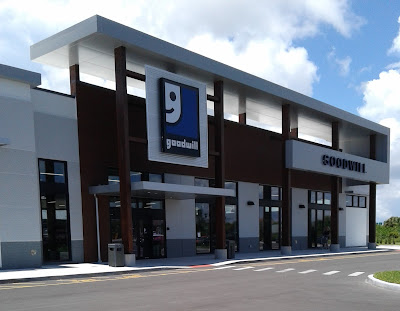 If I were to ask most people to describe the stereotypical thrift store, I'd probably get a description of a very low-budget place located in a washed-up shopping center anchored by Big Lots, Save-A-Lot, and a pawn shop, cramped and messy on the inside, with mismatched fixtures and signage throughout. While the thrift stores described like that are usually the best ones to rummage through years worth of piled-up junk, sometimes it's interesting to see the other end of the spectrum - the sleek modern thrift store (yes, never would I have thought I'd use the words "sleek" and "modern" in the same sentence as "thrift store"!) The "sleek modern thrift store" will be the subject of this post, where we'll be taking a peek at Goodwill of Central Florida's fancy new look!

If any kind of thrift store is going to make it in the upscale-leaning Brevard County community of Viera, it's going to be one that looks like this. The Viera Goodwill opened on May 28, 2020, in a brand new building constructed across the street from the former Earth Fare store (and future Winn-Dixie). The Viera Goodwill was the second store in Goodwill of Central Florida's fleet to feature their new look, following the opening of the Lady Lake Goodwill on May 14, 2020. For quite a while now, Goodwill of Central Florida (who operates all of the Goodwill stores in the greater Orlando area) had been using a colorful interior palate, which we saw a little bit of in my recent post about Kissimmee's Mill Creek Mall. These new stores opened in the last few months have switched to a completely new interior decor package, featuring a gray and blue color scheme. But before we move along inside, I just have to say this place has one fancy looking exterior for a thrift store too! 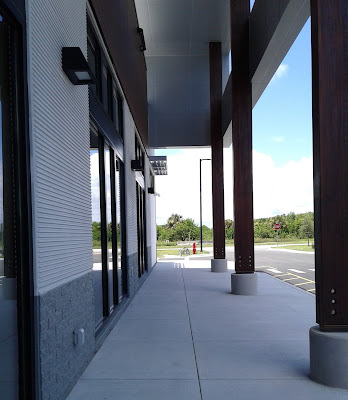 Before stepping inside, here's a look across the store's front walkway. One thing there isn't a shortage of in this building is natural light, as there are windows wrapping around the front and sides of the building, which was a nice touch. 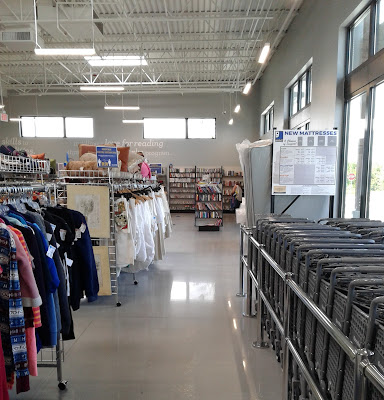 You enter into the middle of the building here, stepping into racks of clothing. Clothing takes up 75% of Goodwill's sales floor, and like most thrift stores, is the majority of what is sold here. All of the non-clothing merchandise is located along the store's right side wall, visible in the distance here. 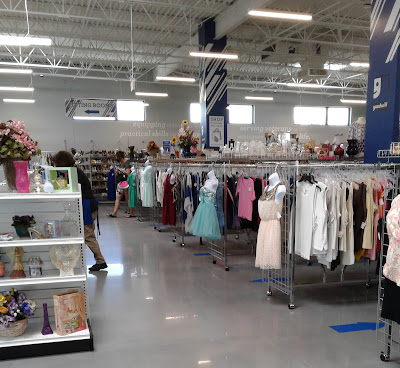 Here's a better look at what you see when first walking through the store's front doors, looking straight into the racks of clothing. The new interior decor also comes off quite clear in this image. The walls are primarily gray, with little sayings and pictures describing Goodwill's mission around the store's perimeter. The support poles throughout the sales floor are painted blue to accent the gray throughout the rest of the store, and feature additional advertisements and posters for Goodwill. 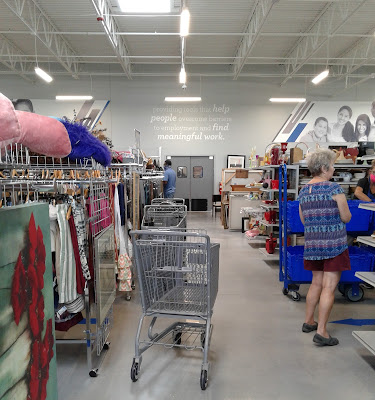 Heading over toward the non-clothing aisles, here's a look toward the back of the store, where we get a clearer view of the wall decor. The book section is located behind where I was standing to take this picture. Usually, Goodwill of Central Florida has really large book sections in their stores. The book selection here seemed a bit smaller than normal, but that could also be because this store didn't have the bookshelves broken into numerous small aisles like the older stores typically do. While I didn't get a close-up photo of the book department, you can see it in the background of the very first interior image of this store. 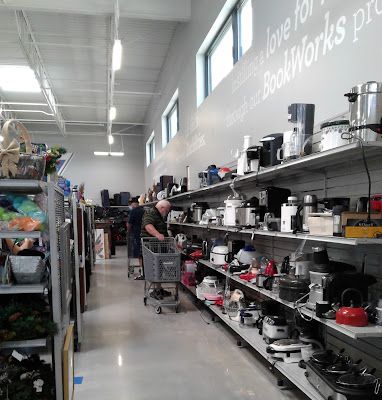 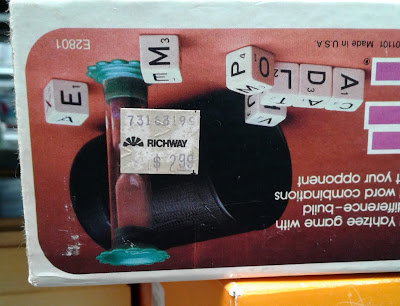 A Richway price sticker on an old boardgame (Word Yahtzee to be precise)... 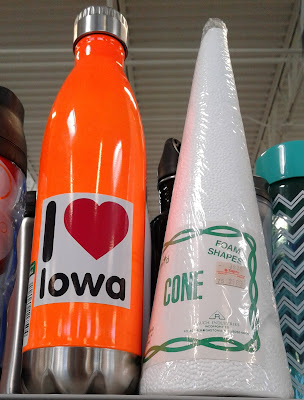 ...and an old Zayre price tag on a foam cone, placed next to an I ❤️ Iowa water bottle that must have been donated immediately upon its former owner's move to Florida. 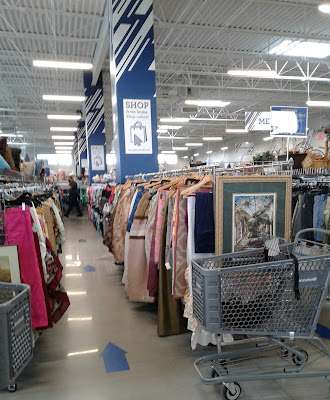 Retail relics and people's love for corn country aside, we'll bring our attention back to the main sales floor of the new Viera Goodwill. Here's a look across the center of the clothes racks as seen from the et cetera aisles, showing off some of the store's decorated columns. 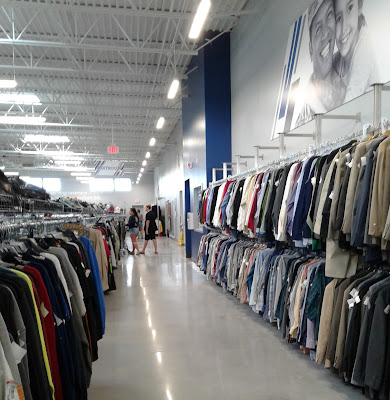 Moving along to the back of the store, here's another look through the clothing. 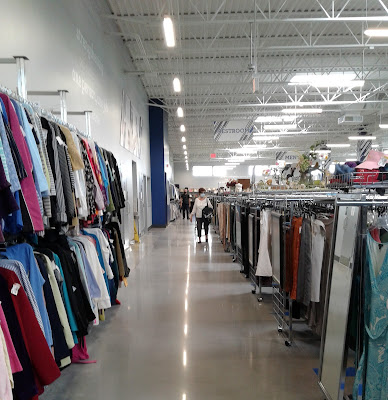 The back wall again, but this time as seen from the opposite side of the building. 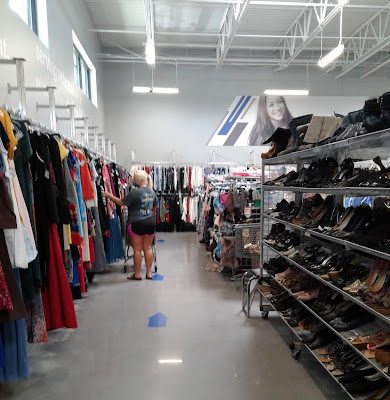 Turning the corner to the left side wall of the building, we don't only find more clothes, but also more windows. 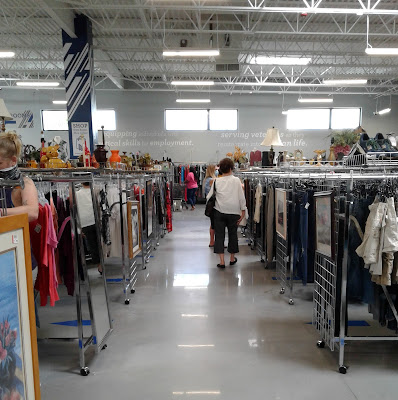 It's not just these brand new Goodwill stores that use lots of windows, but most of the buildings Goodwill of Central Florida has built from scratch over the last few years are quite generous with the natural light. 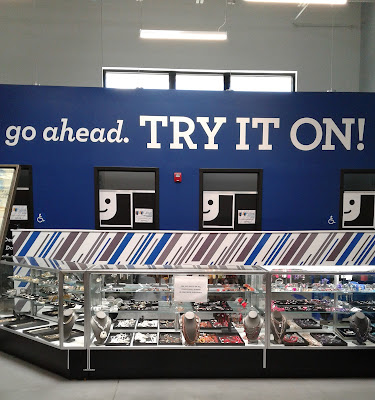 The fitting rooms are located behind the jewelry counter in the front left corner of the building. 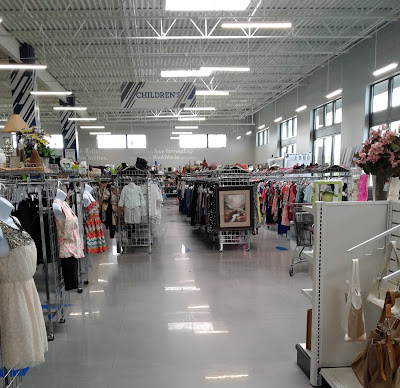 Returning to the front of the store, here's another look across the building, as well as a sample of the store's department signs (which only exist for the clothing departments). 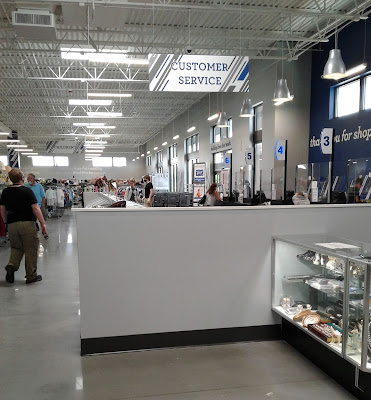 The check lanes are located in a small queuing area at the front of the store, off to the side of the main entrance. 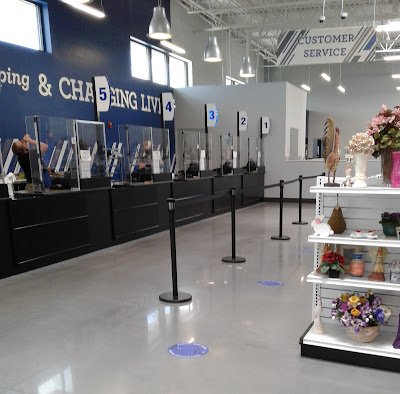 Here's a better look at the front check lanes, complete with light up LED number poles - a bit of a fancy touch for a thrift store. Considering I've been to some thrift stores where the cashier has nothing more than a calculator and a notepad, this is quite the setup Goodwill has here!

Goodwill of Central Florida will have a third location like the one we just saw opening in Lake Nona on July 23, 2020, but that's the last new store I know of out of them for right now. Goodwill of Central Florida has been relocating and upgrading their existing stores quite a bit over the last decade, so I wouldn't be surprised to see some existing locations remodel or upgrade to this new look as well. Compared to most thrift stores, there was plenty of organization and coordination of merchandise here, topped off with a decor package that's complete and matches everything else in the building. While it's fun to pick out old Kmart shelves bought at a liquidation sale and decor remnants from prior tenants when shopping at the thrift store, sometimes it's fun to see what happens when the 2020s meets the thrift store!

Anyway, that's all I have for now. Pretty much all the other thrift store tours I have in my archives are to showcase remnants from a prior tenant, so we'll be back to the comforting confines of our stereotypical thrift store in the Save-A-Lot plaza before long. So until the next post,