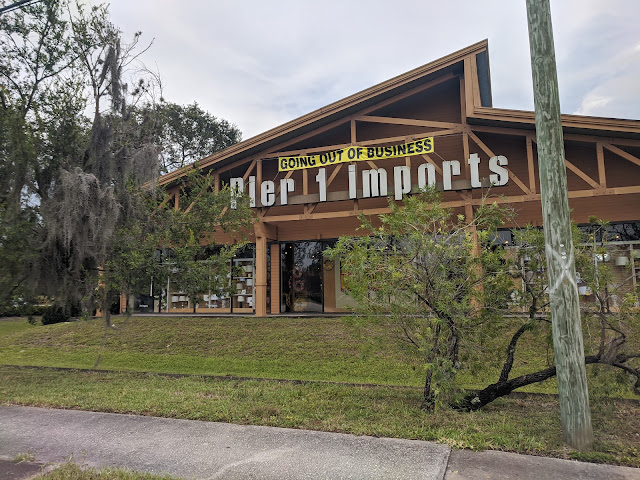 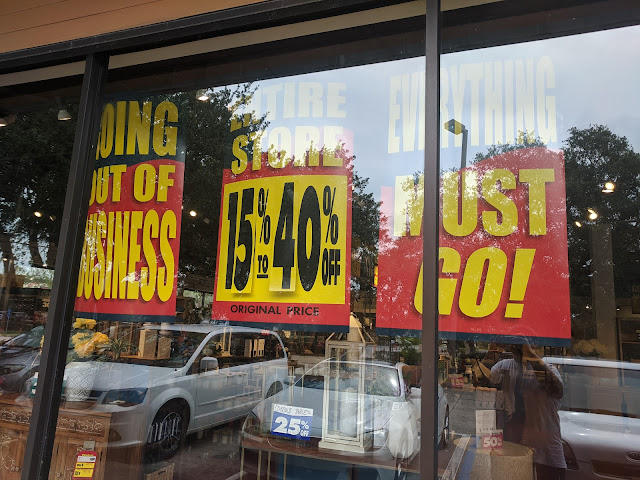 From what I read, by some miracle, not all Pier 1s are closing yet, but the West Melbourne store didn't escape the list, and so the familiar banners were unfurled. 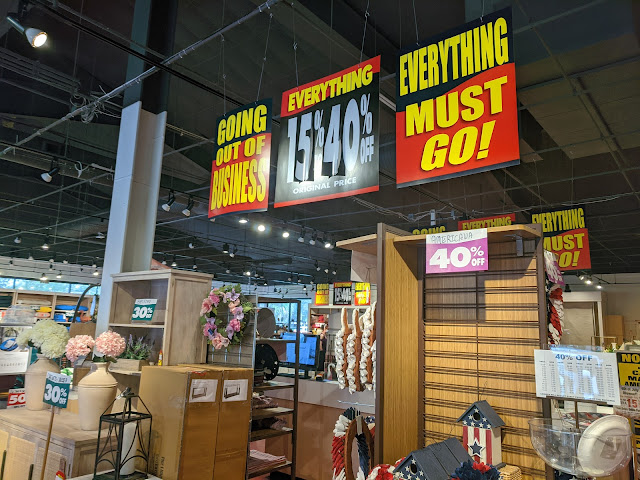 This feels like a common photo - the banners centrally placed in the store. Discounts were still fairly slim at this point, the maximum was 75%, for Easter items that were likely already heavily discounted before liquidation began. The max for normal goods was 40%, seen on "Americana" here, while most goods were marked lower. 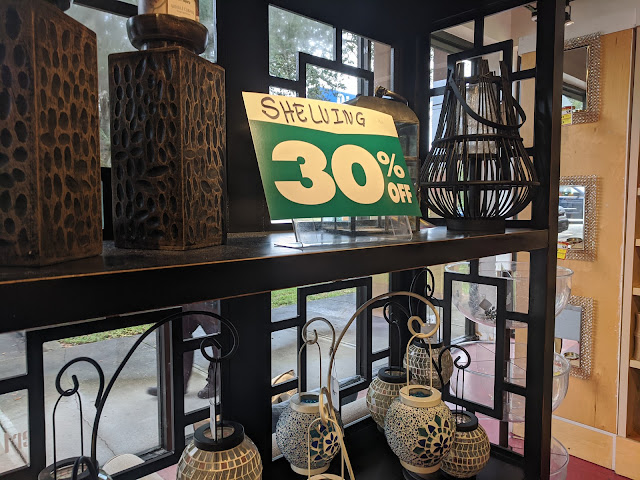 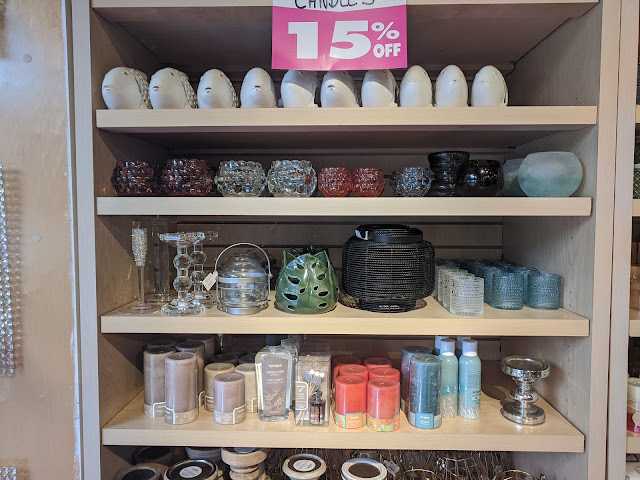 The smaller discounts, shown here, are well reflected in the amount of stock still left. This isn't just due to a lack of customers either, the store seemed fairly busy with a lot of cars coming and going, at least for a store as normally low volume as Pier 1. 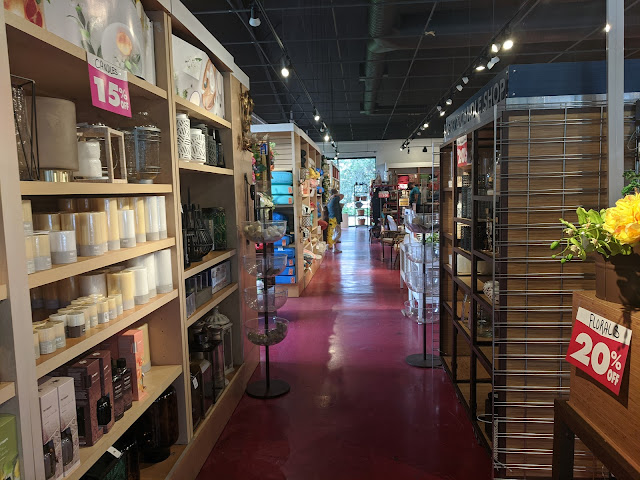 These shelves were the closest this store had to proper "aisles". Otherwise, the store was so open I got myself turned around a little bit. 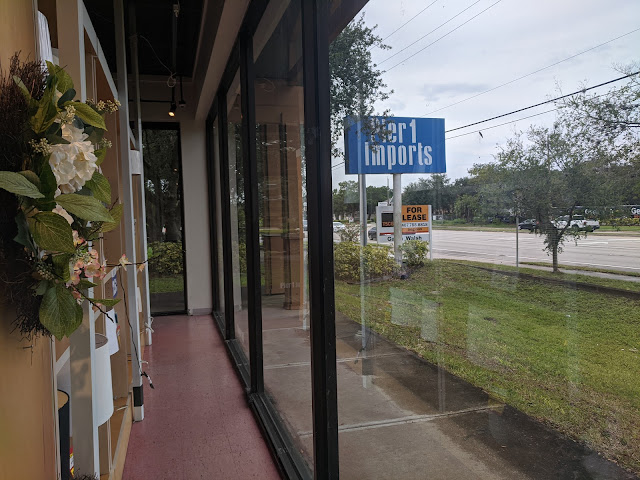 Looking out the large windows that face the road, we can see that even fairly early in the liquidation, the leasing signs have already been dragged out, even before the store's closure. This stretch of West Melbourne isn't very dead, and I won't be surprised if this space gets re-tenanted fairly quickly. 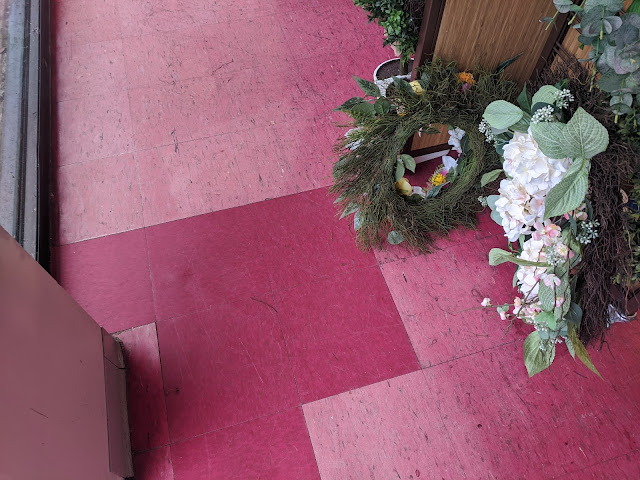 Appearing near the windows in a few places were these oddly off-color tiles; the only explanation I can think of is maybe these tiles were either in shadow, or tiles that had been replaced after leaks from a bad window seal damaged them. With some of the rain we get in Florida I would not be surprised. 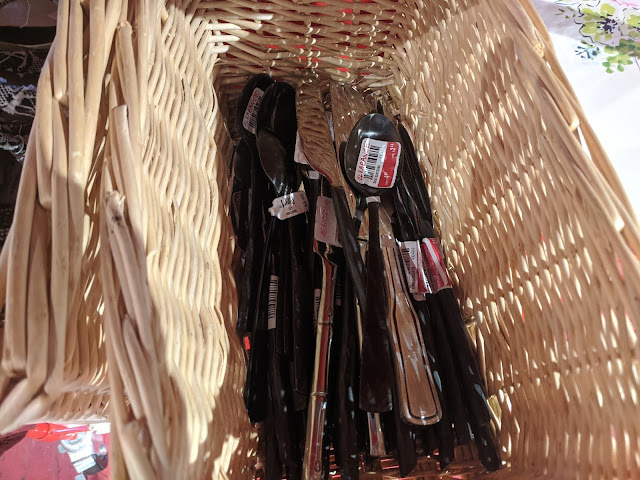 Did you know that Pier 1 sold individual pieces of cutlery? I didn't. This was in the clearance section though, so maybe it was once a full set that was split open in the truck or something. 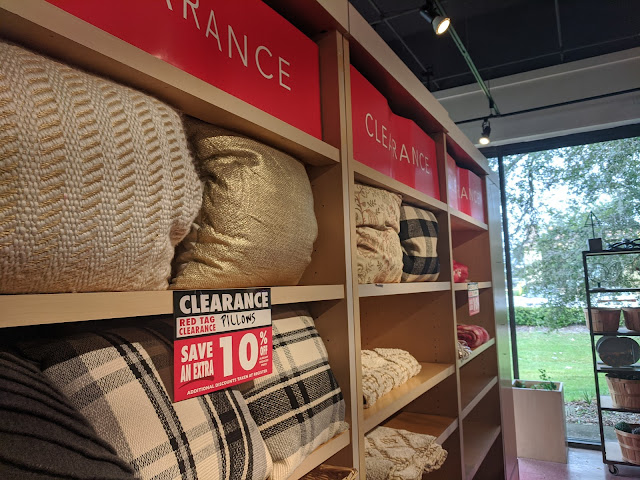 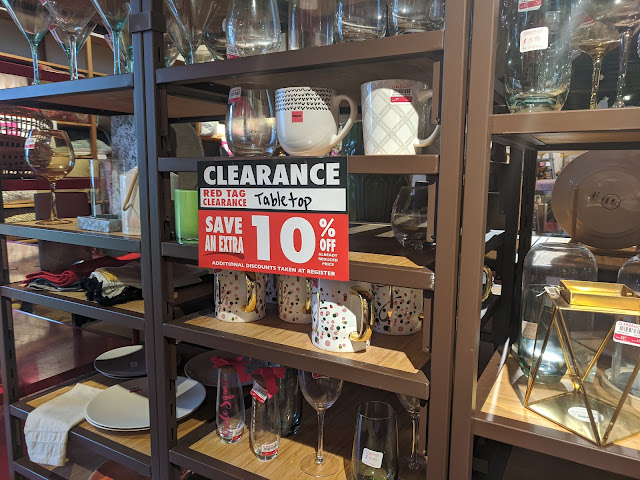 Items on clearance received the smallest discount. This store had a fairly good clearance section, it seemed, more than I'd typically expect at a store like Pier 1. 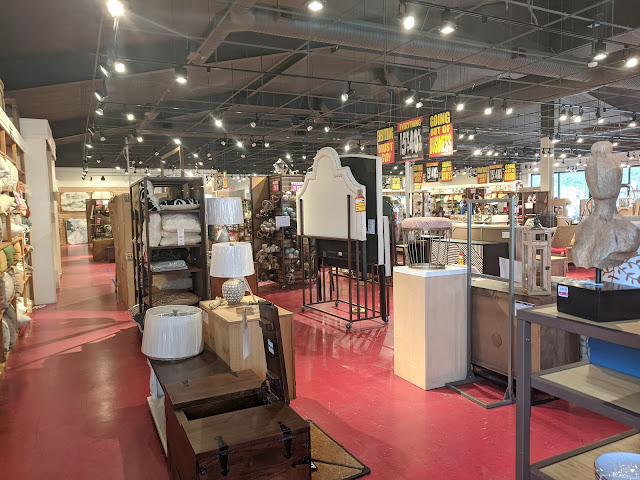 This shot is taken from the back of the store, I believ- is... is that faceless mannequin staring at me?

I really found this sign quite humorous- with a store that portrays itself as upmarket as Pier 1, you'd think they'd have a better name than just "Spheres". I almost wish I had bought one of these, just for the joke. 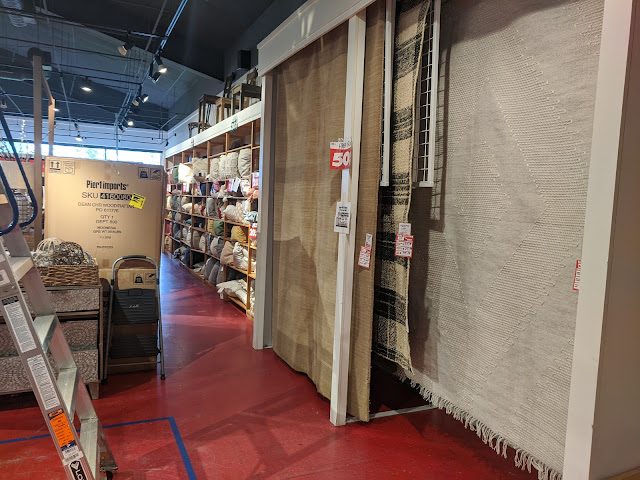 The rugs! The rugs have invaded!- but calm down, these aren't the late liquidation omens they are when they show up at a Macy's or a Sears. I'm pretty sure Pier 1 regularly sold these kinds of rugs, which explains where they went when it wasn't to dubious local liquidators. 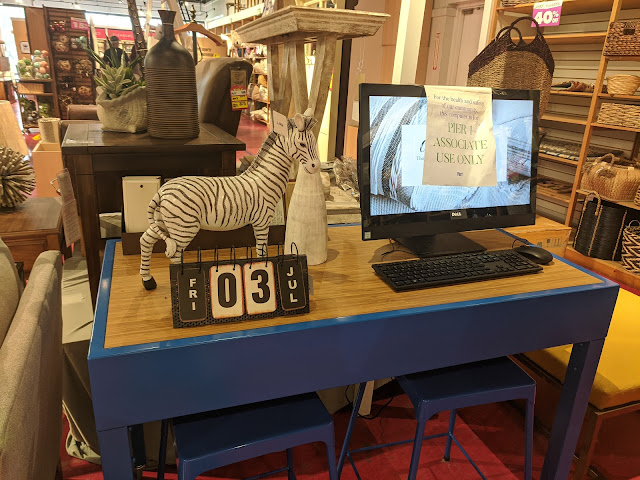 At least they've kept the calendar here updated, even if I think the kiosk itself has seen little use recently. 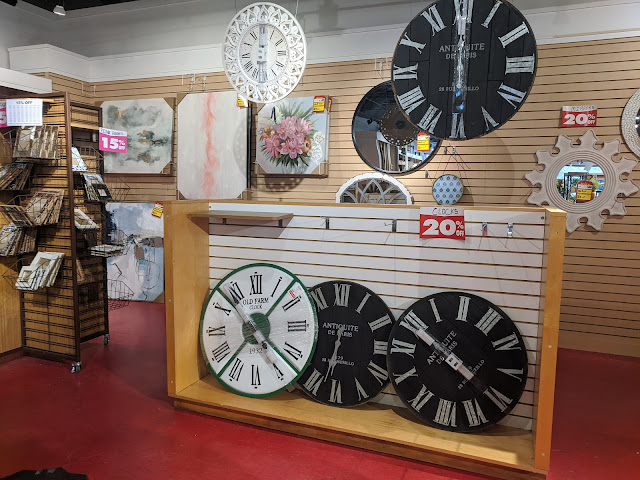 Time has stopped on these clocks, though. Even at 20% off, I've seen similar goods at Ollie's Bargain Outlet, and probably for an nth the price it was here. 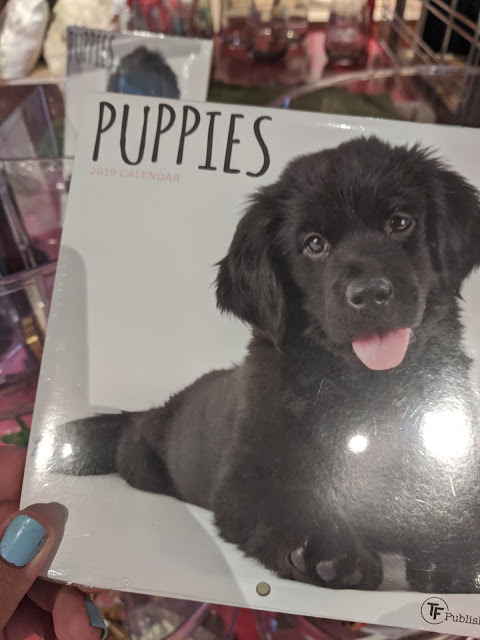 Not all the calendars in the store were kept up though- this 2019 Puppies calendar is still sealed in it's plastic! There was also a second, so someone made the confusing decision to keep these things twice. 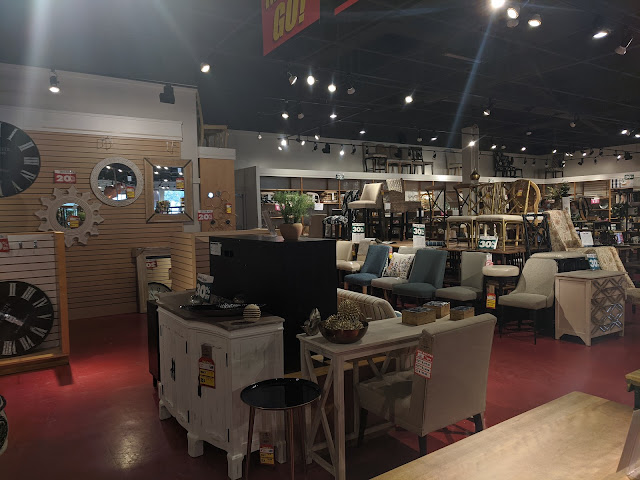 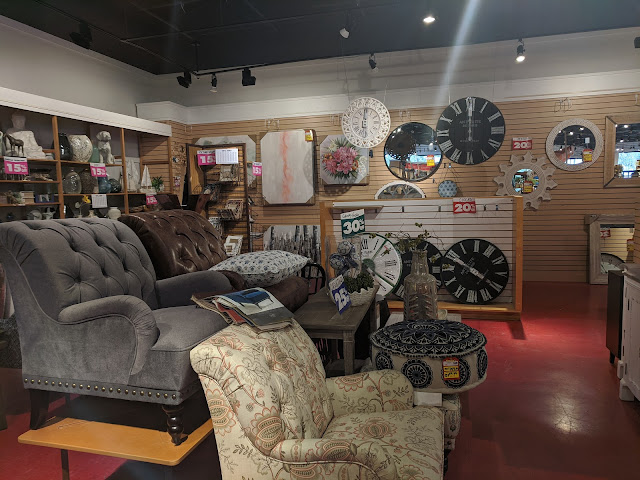 Some more general overviews of the store, including the industry standard "large clocks and comfy chairs" section. 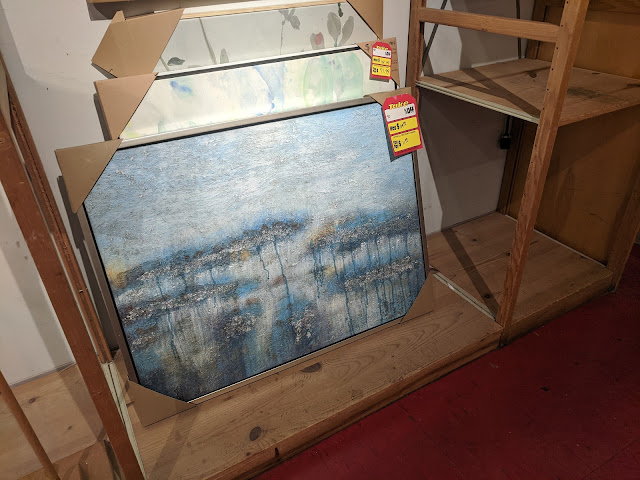 Why search out a nice, actual piece of artwork from an artist when you can pay almost as much at Pier 1 for something that arrived in a crate of 50 from overseas? 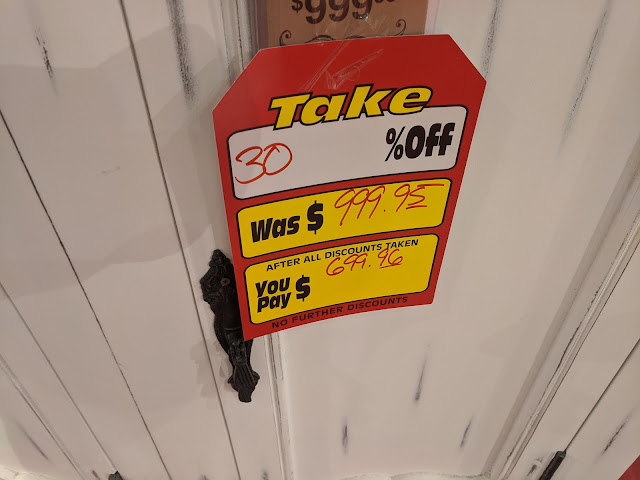 I may be biased, because I don't buy much furniture and most of it comes from secondhand stores when I do, but both of these prices seem high. 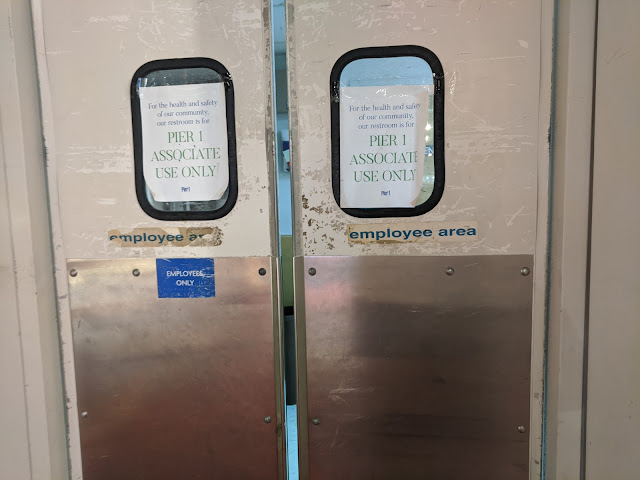 Two eras of Employee Only sign collide, both of them quite damaged. 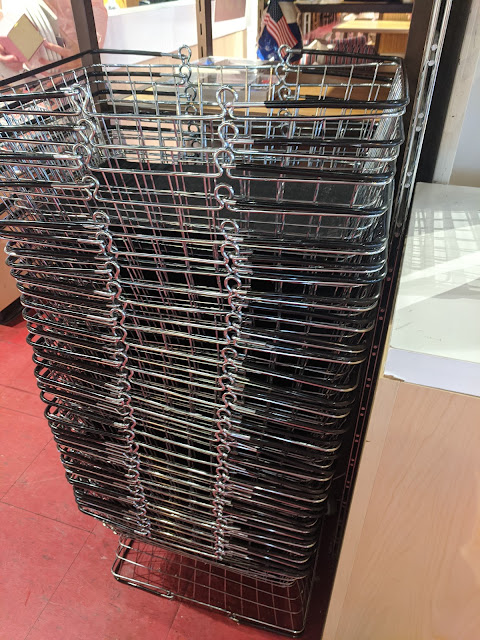 Wire baskets are rare, at least stateside, but Pier 1 had an entire stack of them here for customers, in addition to their more modern rolling plastic baskets. 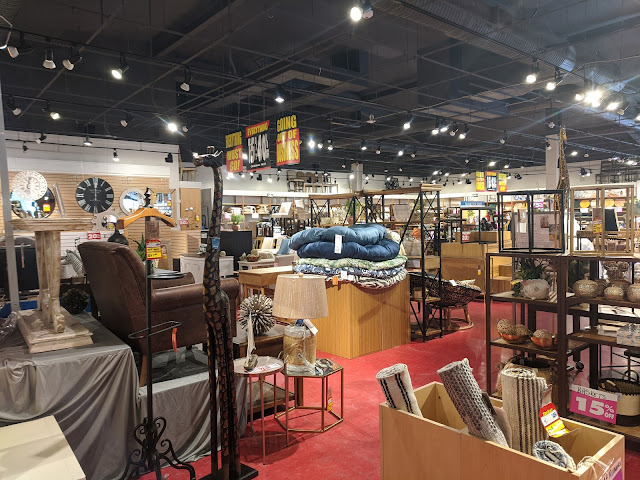 The store is a little chaotic in places. I dread to think how it'll look once we reach the end of the liquidation and employees let organization slip. 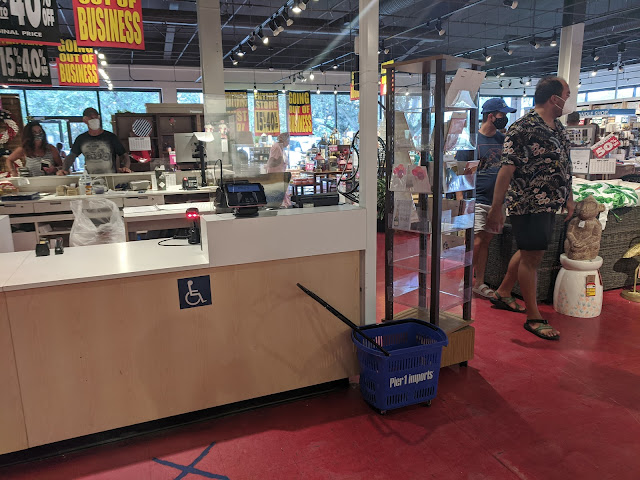 One of the larger rolling baskets (at least I think they have wheels? They must do) I mentioned earlier. 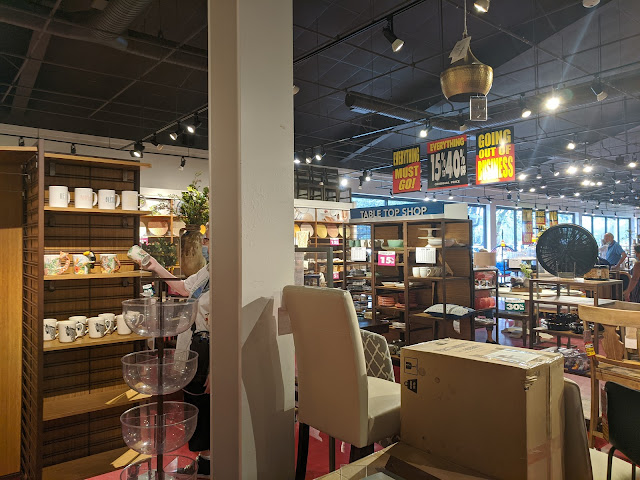 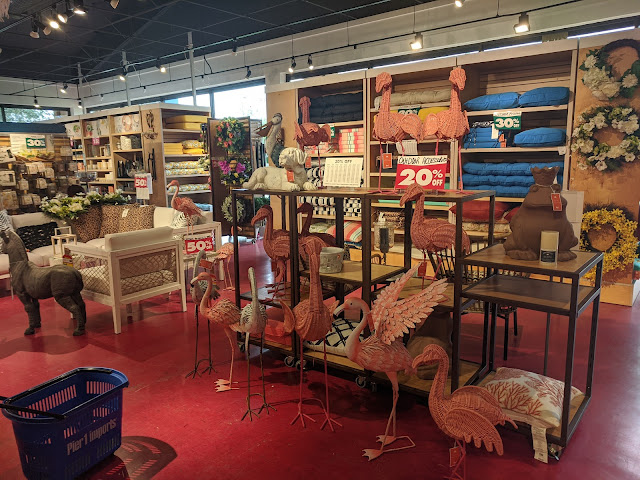 Look at how fast nature reclaims the abandoned, the wild flamingos have already come to roost... 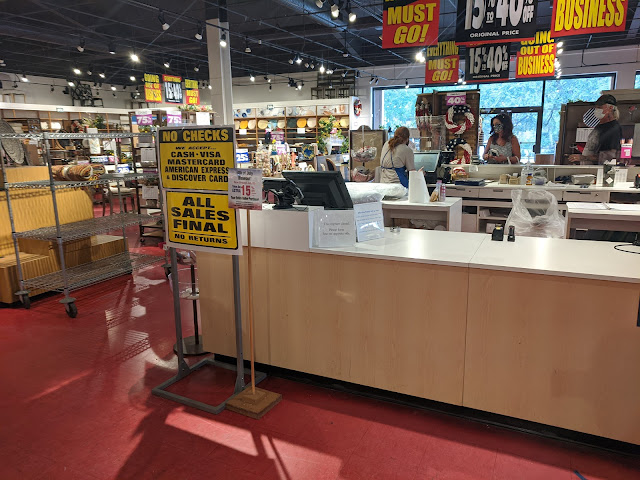 The checkout was a two-sided affair, though they only had one employee at the register. In fact, I think she may have been the only employee in the store. I guess they cut it to a skeleton crew once liquidation began. 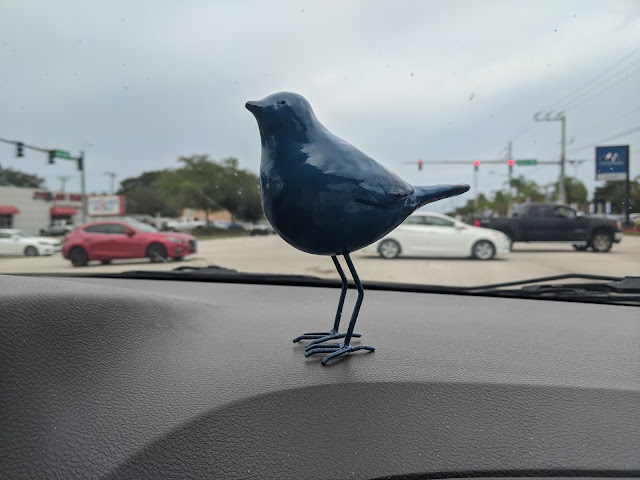 And here's this post's name sake- a (slightly damaged, the beak is chipped on the other side) decorative bird I bought from the Easter section for $2.50. I also bought a pair of Pier 1 branded "wine glass markers" for not much more, and that was my entire purchase from the store.

I named him Pierre, by the way.

Posted by Cape Kennedy Retail at 11:39 AM