Brevard County is a sad place if you're looking for Howard Johnsons remnants. Melbourne is, while technically still standing, lacking a gate lodge or restaurant, and also a site with a ...disturbing (warning: rather involved discussion of murder) history. Cocoa Beach lost it's interesting sections many years ago, and while the "Plaza Hotel" section remains as a Double Tree, it's a later built high-rise with none of the charm. Cocoa had very well kept specimen, operating as a sketchy motel, until it's demolition was ordered and it was reduced to rubble in 2005. That leaves only one location on our roster...

Titusville. Ah, Titusville. The "Miracle City" gone bust. Titusville's Howard Johnson's initially seems a gold mine, if you read the Under The Orange Roof article on it. A beautiful, orange-roofed gate lodge. An amazingly preserved exterior.

So of course, they knocked it down in 2014, with nebulous plans for it to become condominiums. 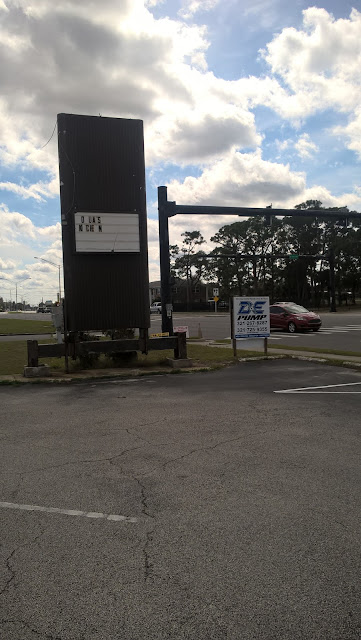 Okay, well, the sign isn't very interesting. And I doubt it has any origins in the HoJo days. But, I don't have a good overview shot of the building itself, so we'll start here. 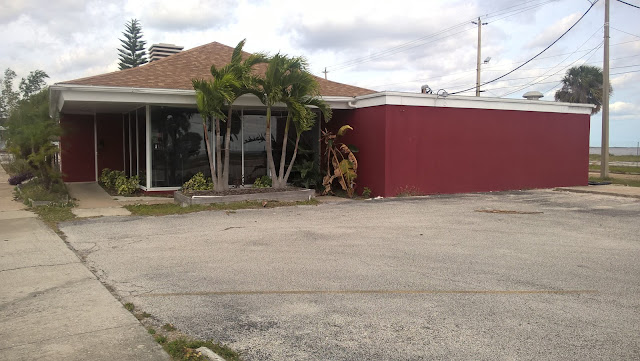 The building, despite a revolving door of tenants (like many former HoJo restaurants) retains many hallmarks of it's original tenant. There's no more weather vane, but we still have the slotted piece on the roof. I also really like the large glass panel windows towards the entrance. 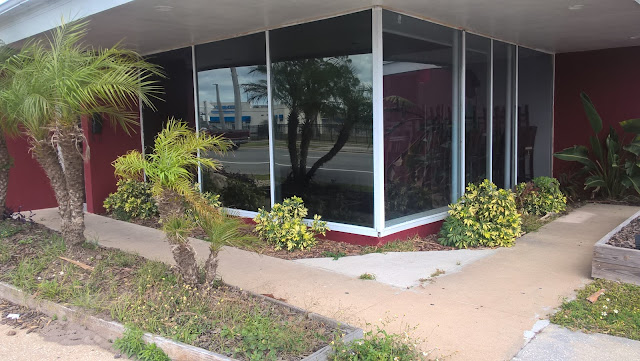 A nice close-up of the glass windows. The entrance is seperated from the glass windows by some small walls; I'm unsure if the big board was once a window, but it'd fit. The "Q" is for "Quam's Kitchen", the most recent tenant here, which closed in August 2018, claiming they had been released from the lease due to repairs needed to the building. 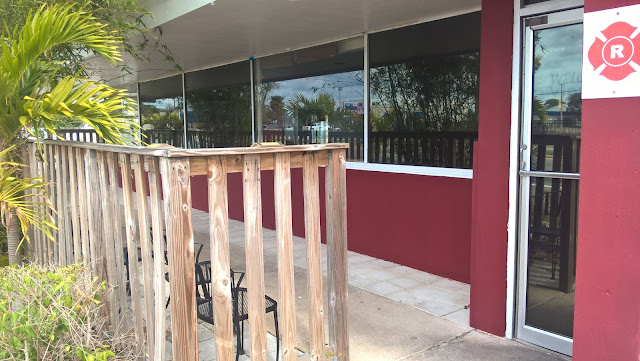 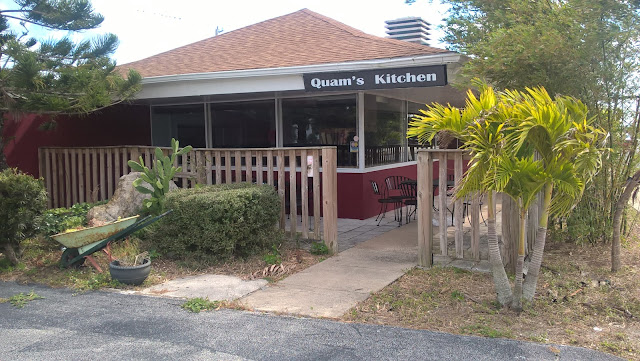 Quam's converted some of the excess exterior space to an outdoor seating area, with a lot of big wooden fencing. Not sure how long that wheelbarrow had been there, or whether or not it was part of the landscaping. 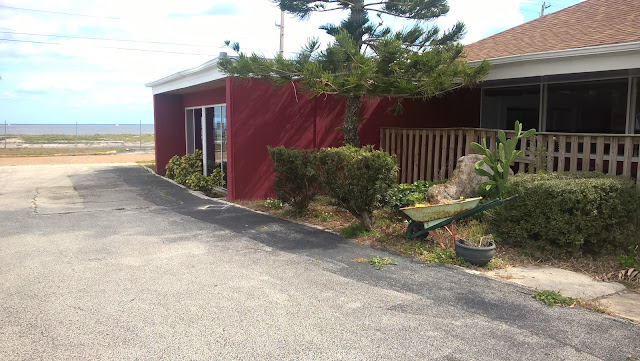 I believe this boxy bit at the back here is just the dining room, but it seems awkwardly built. I don't believe it's an addition though, as it matches the rest of the building. 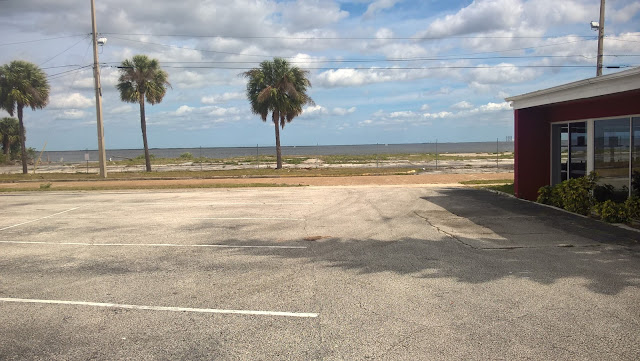 Looking out towards the Indian River, this is where we would have once seen the motel building in all it's glory. Now, it's just an empty lot, behind chain link. The news article from 2014 said that the owner had been given "a few years" to do something with the property. So far? Nothing. Not that we need more condominiums. 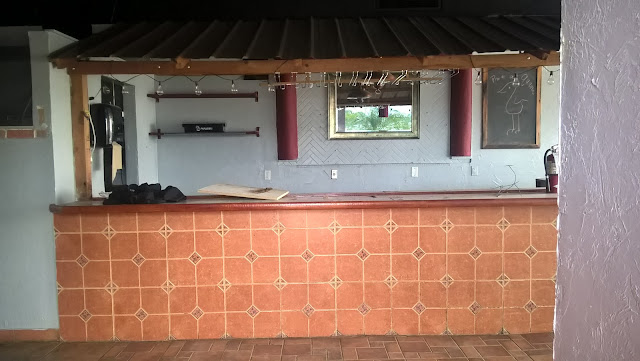 I only managed to pictures of the interior, however I don't think I missed much. The interior appears to be from Quam's or previous independents- none of it' exactly screams HoJo's. I do enjoy the little bird on the chalkboard back there. 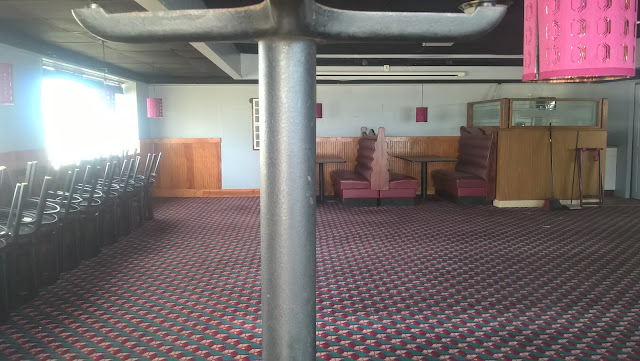 The carpet's pretty funky, as is the lampshade, so maybe they're original. But I'm still not too sure. As you can see, Quam's was well closed up by this point, with all the chairs stacked up and away and the interior increasingly stripped bare. 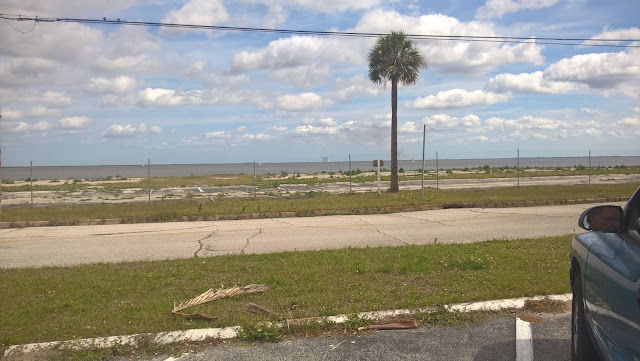 Here's a better shot of the former motel property. Not much to see, except the lone palm tree, and a small sign. Wonder what that says? 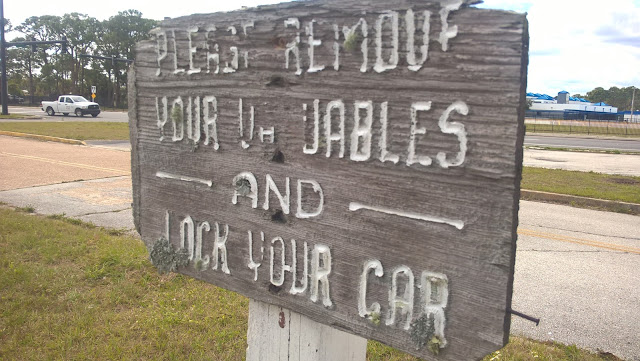 A battered, peeling wooden sign- that is almost certainly from the HoJo days! While moldy and losing letters, the message is clear.

Please Remove Your Motels And Lock Your Restaurants.
Posted by Cape Kennedy Retail at 10:49 PM